Sometimes the weather works with you and sometimes against you. I had one of those “with you” days Saturday. An early departure from Lewiston was planned and the weather cooperated.

The afternoon before, I’d landed in gusty winds and was a little concerned leaving Charlie outside in the wind, but it was well tied down, and watched-over by Ralph Stout of Stout Flying Service. Since I hadn’t planned to be in Lewiston, I hadn’t made hotel reservations. Ralph got on the phone, made me a reservation in downtown Lewiston, then rode me into town. “I’m going to the bank anyway, so let’s go,” he said. I love it when a “plan” comes together.

In any case, Saturday morning was glorious. Calm on the ground but promising as much as 40 knots on the tail. Because of the rising terrain out of Lewiston, I headed right for 9500 feet. A 150-hp GlaStar is not the most sprightly climber, but I averaged 500 fpm all the way up. With the new G5 in the panel, I had both an OAT probe (there wasn’t one before!) and a true-airspeed calculator. Assuming no pitot-system anomalies, the result was a smooth 120 knots true at 9500 on an indicated 2450 rpm. I could get 125 knots true with another 75 rpm. All of this is subject to verification by GPS-based speed runs when I get home.

A quick aside here. Charlie Echo has all analog gauges; a mechanical tach, Westach electric needle gauges, a single EGT and CHT, plus the usual items including fuel pressure. I have no reason to think these gauges are out of whack but I also haven’t calibrated any of them. It looks like the airplane runs cool, almost too much so, but without all-cylinder monitoring, I’m loathe to start moving the ground-adjustable cowl flap. It’s been running fine for 400 hours like this, after all. But the EGT needle moves so slowly that leaning is a challenge. So I went back to my Cherokee days and leaned to peak rpm and then backed off just a bit, enriching only in the event of roughness.

Eventually terrain and a few low-level bumps—much less than I expected given the wind velocities—put me up to 11,500 feet, which gave me 120 knots true on what would later calculate to be 7.5 gph for the leg. Not bad considering the length of time in the climb.

Out of an abundance of conservatism for an airplane so new to me, I kept both fairly high and routed over lower terrain or towns and roads. So rather than cut a straight, magenta line across the mountainous northwest, I aimed first for Missoula, Montana, made a slight right turn toward Helena, and then made a beeline toward my planned fuel stop in Miles City, Montana. When I look at the green line that the Garmin Pilot app created for the flight, I see a few squiggles, which were partly for weather and partly to edge toward lower terrain.

Gradually the mountains slough into an arid high desert and the terrain becomes far more comforting to someone just “breaking in” a new airplane. Well, new to me, anyway. After a 6:42am departure from Lewiston, I landed in Miles City at 10 minutes of 11, after losing an hour to mountain time. (Don’t you just love flight tracking to keep the data sorted?)

Miles City is one of those big airports that seems to have not quite enough traffic to justify the runways, but it was perfectly placed for me. A quick fill up, a quart of oil for the Lycoming and a snack for me, and I was flying again 28 minutes later. Inevitably my rest stops get longer later in the day, but I was still on my game this early.

From Miles City to my destination for the night, Waukesha, Wisconsin, I dutifully checked the weather and the charts and determined that, yes, I could just plug in my destination and get going, figuring that there were multiple options for a fuel stop. That’s one of the real beauties of having an app like Garmin Pilot. I came to love guessing at a good fuel stop, adding my estimate to the flight plan, and then being able to determine if it was too early for good efficiency or too late to leave me a generous reserve. Knowing that the entire leg was less than twice the comfortable endurance eased my planning a lot. Not like I didn’t plan this trip about 100 times before I ever left home, but being able to make real-time assessments based on current weather and winds is a powerful tool.

I could not have asked for more accommodating weather. Basically I set a straight course for Waukesha and what would eventually be my fuel stop in Olivia, Minnesota. I just clipped the southwest corner of North Dakota, cranked along through the upper third of South Dakota on 25-35 knot tailwinds, then dropped into Olivia, which is about 100 miles west of Minneapolis. After losing another hour to time zones, I still got in before 4pm central time. 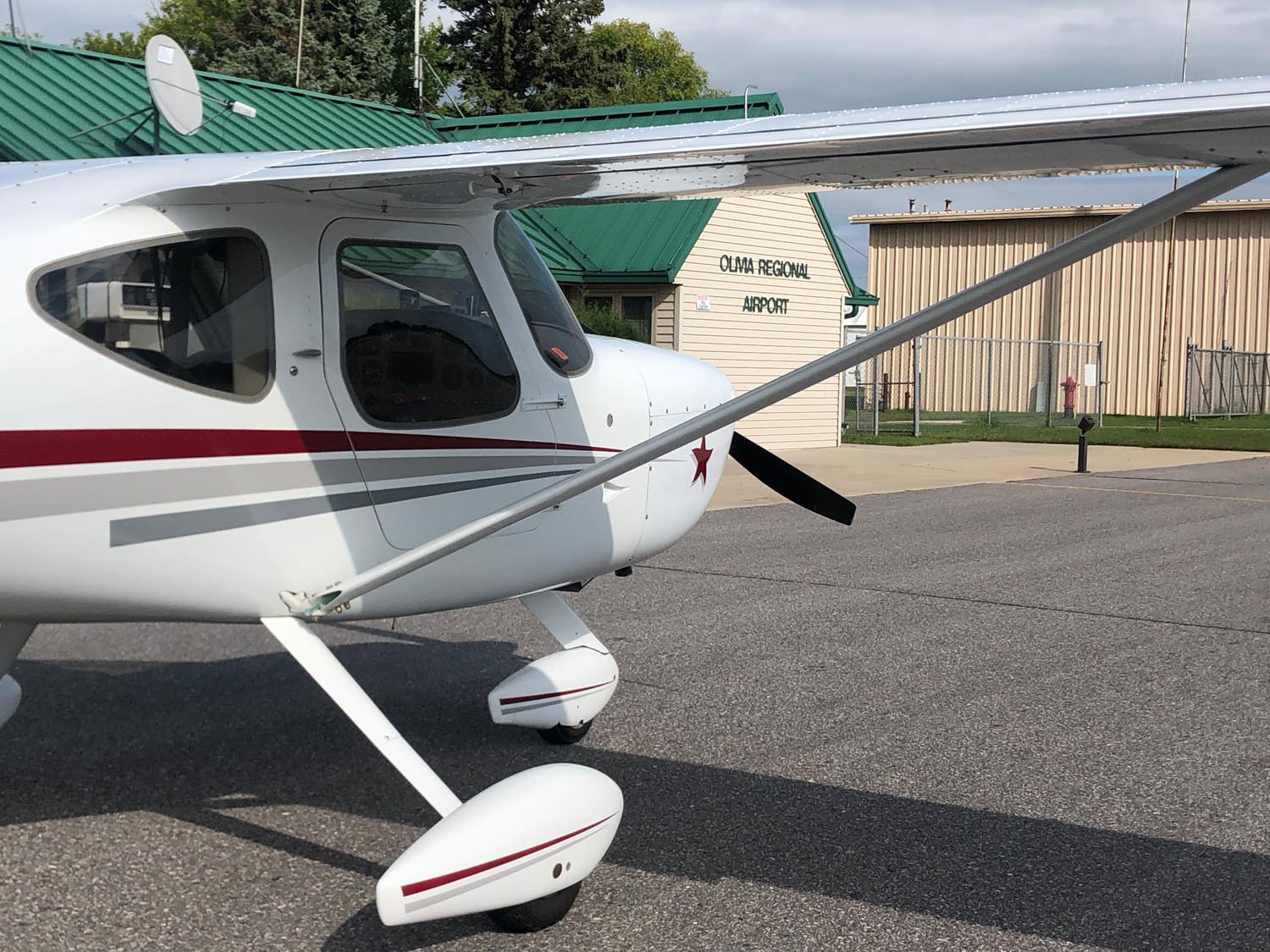 I topped up at Olivia Flying Services and was surprised to learn they didn’t take credit cards. “Oh, I’ll just give you an invoice and you can pay by check when you get home,” the man said. As it turned out, I happened to have checks in my wallet—that almost never happens—so I paid on the spot, wondering how often this worked out badly for OFS. “I’ve never not been paid,” he said, somehow sensing my question. Life is different in Olivia, Minnesota, I suppose.

The final leg of the day was a mere 2.3 hours straight into Waukesha, clear skies, calm surface winds, and both the city of Milwaukee and Lake Michigan visible on the horizon. It wasn’t until I’d texted my friends and shut down in front of Stein’s Aircraft Services—a really sweet FBO with some of the cheapest fuel of the trip—that I felt the length of the day behind me. But it was, nevertheless, great to realize I was within one fuel stop of home, and satisfying to feel the glassy touchdown of Charlie Echo on the Waukesha runway, proving that I was getting to know it better with every passing hour, every landing. 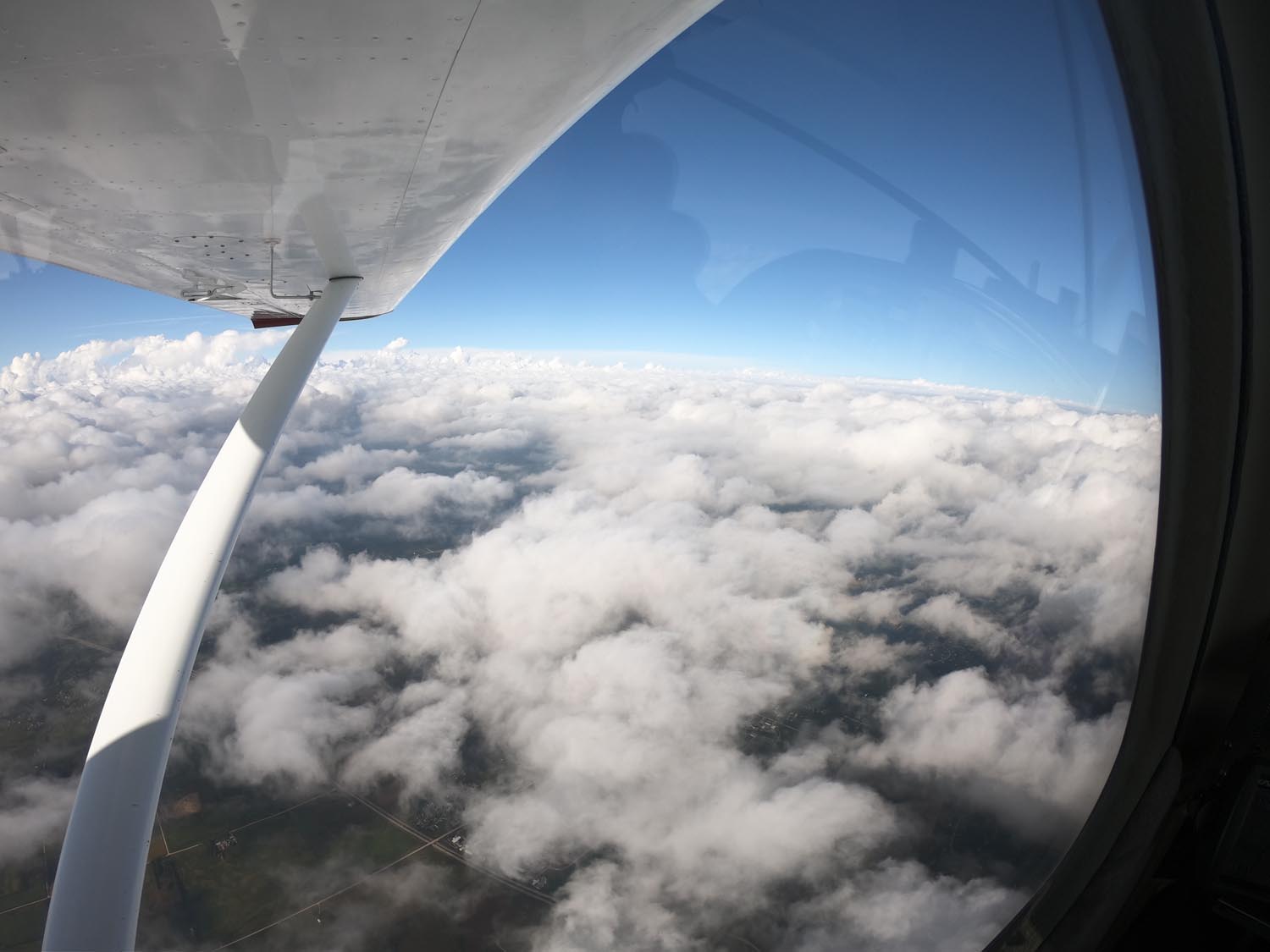 Jim Weir - July 19, 2011
0
Documenting the changes you make to your airplanes electrical system is tedious work-but vital. Jim Weir takes a look at the software available to help you keep track of upgrades and mods.