John Deneke is a guy who sees an inability as just something to overcome during a build. Too short to reach a light bulb? Get a ladder. Engine too high to reach? Leave the wheels off till last. Simple.

In the 1940s and 50s polio was a fear thats simply not with most of us anymore. But Denekes realization of that fear occurred in 1953 when, at the age of 9, he lost the use of his legs. Three years later his grandmother, noticing that he was always looking at airplanes, bought him a ride and the hook was set. Another eight years slipped by and, at 20, John decided he wanted to be an aerobatic pilot, so off he went to the Teterborough, New Jersey Airport in pursuit of a little piece of paper with single-engine land printed on it.

Lessons went quickly, but when it came time for his solo, the CFI pointed out that Denekes condition precluded his use of brakes in the Cessna 172 he had been flying. Sorry, I cant solo you, the instructor said.

I know. What can we do about it? Deneke asked.

Well, seaplanes don’t use brakes; go see the guys over at the seaplane base.

So Deneke headed over there, and after about an hour of dual, they said he was ready to solo.

Getting the medical signoff was harder than flying. I had to get an examiner who was trained in medical issues as well as seaplanes, but first he had to go out himself to get current before he’d sign my Statement of Demonstrated Ability (SODA), Deneke said. Another challenge, another solution, and his first 100 hours of logbook time were in an Aeronca Champ on floats.

Biplanes are his great love, so the first aerobatic lesson was to be in a Stearman. But a Bcker Jungmeister was sitting on the ramp, and its come-hither appeal redirected his attention until the CFI jolted him back by shouting, Well, come on!

New friends lead to new opportunities, and when Deneke became good buddies with the owner of a Navion, he found that because it didn’t have toebrakes, he could fly it as well as anyone. He laughed when recounting how he started with seaplanes and, when he finally got around to where most of us start, single-engine land, he had to do it in a complex high-performance aircraft.

The hardest part was that having learned in a tandem-seat aircraft, moving to the left seat was challenging. In fact, Deneke prefers to fly from the right. It’s amusing when he and the instructor get out of the airplane, and onlookers assume he’s the CFI. Why is the PIC on the left anyway? 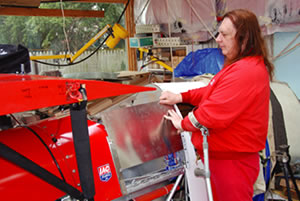 Deneke cant climb up and over a high cockpit wall, so he trimmed it down and is now adding a slide-in door to restrict wind effects.

The aerobatic itch still needed scratching, so in 1965 Deneke concocted an extra seat belt to hold his legs to the floor of the airplane and, with his knees locked, was able to work the rudder by hip action. That necessitated a loose hip belt so that extra tension went into the shoulder harness.

Moving to the Bcker Jungmeister allowed him to build it his way, so now the rudder and throttle are combined into a single lever. Eventually Id like to convert the rudder to servo operation he says. Mike Perkins in Havana, Illinois, is in the process of developing one.

Next, he found that the FAA and the International Aerobatic Club require a parachute. There’s no way Id be able to get out of the airplane in a situation that demanded its rapid use, Deneke says, so he opted for an external BRS chute on the Jungmeister.

Almost anyone who’s ever built an airplane first had to build a shop, and Denekes no exception. His is a bit different, though, with the benches just high enough for him to scoot under when seated on his creeper and deep enough to allow him to go straight in.

Once on his creeper and scooting around the shop, shelves are an inconvenience, so he opted for 54 feet of workbench. A lot of stuff gets dropped there, he said with a grin. The shop is relatively new. For 30 years he’d done bolts-out restorations of old Land Rovers in the driveway. The local dealer had to order parts for the older models and didn’t want to tie up a work bay during the wait, so those jobs were sent to Deneke. Thirty years of working in the driveway through New Jersey winters was enough, so in 1998 he personally worked the rebar and poured the concrete to build a shop behind the house in which he’s lived for 55 years.

I wanted the shop bright and open so I could see Meg, he says, referring to his dog. So I extended the windows down to the workbenches. She needs the company, and I like to watch her toss her toys around.

The ceiling is crisscrossed with his own design of pressed-wood vertical members glued to 2×4 material. The result is an I-beam that will support the body of his Land Rovers or, with one of the chain hoists, pick up the entire Bcker Jungmeister. But like everyone else, with the heavy or clumsy parts he sometimes phones a friend, in this case Rick Moore, for help.

As cold as the winters can be, there seemed no reason to heat more of the shop than necessary, and with the landing gear off of the airplane, it was pretty easy to install a temporary wall of foam insulation around the aft end. I’ll work on that end when it gets warmer, Deneke said.

A look around showed all of the major systems installed or complete and in storage. The neighbors would soon be hearing the sound of a radial engine. How does one go about hooking up an engine to a firewall for which there’s no mount available? Well, I started by mocking up the firewall and then positioning the engine forward to the same distance as the original Siemens engine, Deneke explained. The Rotec is very close to being the same weight, so that seemed a good start. Offset and angle? I set those to zero-zero and will rely on the shimming built into the mount to adjust that as needed.

Having established the positions, the next step was fabrication of the mount. Deneke sketched up what he wanted and then sent it off to Cartesian Tube (www.cartesiantube.com) of Ontario, Canada, who cut the tubing. They did a great job, Deneke said. I cant say enough about their work. Everything fit perfectly, and every tube is numbered; if I screwed one up I could order a new one.

The airframe was originally built in 1988. There were no builders logs, though that didn’t seem to be of great importance. By the time it got to Deneke, there had been three different engines on it as it passed through several hands including Sam Burgess, who had tacked a 420-horsepower Allison turboprop on it and achieved a 2 minute 18 second to 3000 meter time-to-climb record that stood from 1991 to 1999. (Wayne Handley cut that time exactly in half with the 750-hp Turbo Raven.)

The next configuration was with a Vendenyev M-14P nine-cylinder radial engine, followed by a six-cylinder Lycoming. A nine-cylinder Rotec was not first on Denekes wish list, but the originally specified Siemens engine was financially out of reach.

At age 64, Deneke now has some 5000 hours of building into the project since 2004. It doesn’t matter what airplane you build, you’ll spend more hours building than flying, so do a good job of building, he said. He is still working on getting the inverted oil and fuel systems built (the Rotec is a dry sump engine), but he says hes 99% done with the project overall and hopes to get the inspection completed later this year. (The photos for this article were taken a year ago, and are a bit deceiving because final assembly wont occur until it’s time for the actual inspection.)

Deneke has obviously done a lot of thinking as well as building, because this next observation was more practical than philosophical: Taking the engine off or putting it back on doesn’t bother me, he explained, but getting in and out is really tough, so I don’t want to put it on the wheels until I need them to roll it around.

The wings are finished and include strengthened, broader walkways for Denekes unique method of entry. The controls will be configured for his use as well. I can pull on the central bar with my right hand for brakes and then balance the left-right effect with just one finger on each of the levers that straddle the main lever, he explained. At first this method might seem a bit much, until compared to the coordination that would be required to simultaneously control the front brake and throttle on a motorcycle using only the right hand. The throttle and rudder are combined into a single stick on the left side, Deneke explained. I push forward for power and rotate it left-right for rudder. It was built up from fittings I got from Aircraft Spruce.

That system is temporary, as Deneke is watching closely the progress of Mike Perkins of Millennium Flight Systems Corporation (www.milflight.com). Perkins is developing a fly-by-wire system for homebuilt aircraft that eliminates the mechanical linkages between the controls and the surfaces. This will allow Deneke to tweak the relationship between his inputs and the movement of the rudder.

Go back to the parachute mounted on the upper wing, follow the traces, and you’ll notice two things. First, the traces for the support are captured along with the vertical struts in 3-inch diameter heat-shrink tubing. Its a nice way of cleaning up the installation, though at first glance you might think the traces are within a ridged tube and will be trapped there should the parachute be deployed. Second, the traces extend to the bottom of the fuselage, eliminating any direct tension loads on the airframe. The thinking here is that if the system is deployed, its likely due to structural damage with said structure perhaps then unsound.

Gas is fed to the engine through a carburetor similar to the one thats used on Jabiru and Rotax engines. Once he’s had it flying for a bit, Deneke plans to convert it to a fuel-injection system of his own design.

What one is struck by, more than the airplane itself, is the casual attitude Deneke has about his accomplishments. To build your own airplane is a substantial undertaking. To follow a childhood dream in doing so is one more step up. To implement substantial changes and customization beyond buying different glass for the panel or coming up with a unique paint job is worthy of extra kudos. But there is a marked lack of braggadocio in Deneke. Dizzy Dean of baseball fame once said, It ain’t braggin’ if you done it. In Denekes case, he’s done it, but he isn’t bragging. All the better.