As I sit here writing, the cost of a barrel of crude oil has recovered slightly, to just more than $50 a barrel following flirtations with the high $30s since the end of last year. Economic malaise on top of various bailouts have made Americans snap their wallets shut. We are simply not demanding as much oil for fuel as we were a year ago. In these tough times, at least that makes sense. 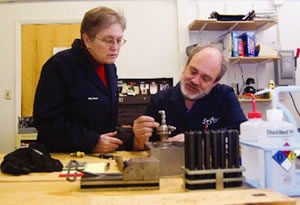 Swift Enterprises, founded seven years ago at Purdue Research Park, is led by John Rusek and his wife, Mary, who have been involved in the field of energy for more than two decades.

But as a pilot who likes to fly myriad aircraft, Im not quite sure why I should care about the price of automotive gasoline (mogas), past the spare change the lower pump price leaves me with to use toward my winged machines. After all, the cost of avgas seems to be as inflated as ever. This baffled me until I did some research on why 100LL, with just a bit more octane than 93 unleaded premium mogas, could command such a price.

Turns out that for the most part 100LL pricing is pretty fair-for such a boutique product. There are few refineries that produce it, and our demand in general aviation hardly warrants the oil companies effort. Avgas makes up just 1% of the fuel refined, and because of its purity standards and the lead it contains (the abbreviation LL is a bit of a misnomer-lead is in fact the secret to its extra octane), avgas must be completely segregated when it is refined, transported and stored. Mistakes have caused costly fleet groundings and, yes, oil companies have even replaced engines over contaminated fuel errors. Frankly, it is expensive to make, move and hold for just a few airplanes (225,000 according to GAMA). On top of that, the Environmental Protection Agency, by October 2011, will designate areas of the country that must take additional steps to reduce lead air emissions, and the states will then have five years to meet these new standards. As a result, 100LL may be a casualty, and the oil companies wont be sad about this. But you already knew that, didn’t you?

The general aviation media has been chattering about the demise of 100LL for years. It is not like no one is trying to find an alternative. Researchers and government have teamed up with the A-B-C groups of aviation to form the Coordinating Research Council (CRC), which has studied alternatives to avgas for more than a decade and come up with some interesting findings. First, the group studied the kinds of engines that actually need the extra boost that 100LL offers and discovered that there are really just a few: the Textron-Lycoming TIO-540-J and IO-540-K, and the Teledyne Continental TSIO-550-E and IO-550-D. All are big-bore, high-performance piston engines that have issues with detonation when fed lower-octane fuels. The airplanes that sport these engines make up about 30% of the GA fleet, and little of the kit-aircraft fleet. Youd think that was the good news, until this fact comes to light: They burn about 70% of the 100LL consumed in aviation.

The rest of the fleet, including most of the kitbuilt aircraft, are equipped with smaller, lower-compression piston engines that will happily run on 93 unleaded premium mogas-if they can find some that is not blended with ethanol, which is a real challenge east of the Mississippi.

A few homebuilders have selected Subaru, Mazda, Wankel and Corvette engines that have electronic ignitions, all the right hoses and seals, and are designed specifically for mogas. These builders put considerable extra effort into the construction and installation processes of their aircraft, and endure longer test flight fly-offs, but they may reap the benefits of their decisions down the road when others are grounded or left making extensive modifications to suit new fuel sources.

The problem with gas mixed with ethanol is that ethanol test kits (a must if you burn auto gas in your airplane) consistently show that gas station gas is not blended well. One batch will test out at 20% ethanol, despite the notice on the pump of no more than 10% ethanol, while two days later a batch from the same pump may test only 9% ethanol. If you’ve adapted your engine, hoses and seals to run with ethanol, that is fine, and some builders have done that. If you have not, get ready for some engine issues.

Pilots flying with small turbine engines and those flying behind diesel engines are still a distinct minority, but a minority with an advantage for the moment, because they burn jet A fuel or diesel, and do not have to worry about their fuel source going anywhere.

It seems that despite a decade of trying, the CRC research into new types of high octane aviation fuels is inconclusive at the moment. In the councils own words from its most recent report, the conclusion is that, Although full-scale engine tests indicated some blends were capable of providing knock-free operation in the test engine, these blends represented the use of specialty chemicals which require further evaluation with respect to environmental impact. That is, the new fuels could be at least as toxic, if not worse, than the old 100LL. The report also went on to note that the chemicals blended with the gas could prove to be impracticable or unaffordable. Not good news. 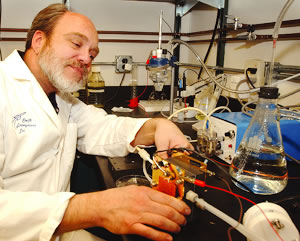 The Ruseks SwiftFuel is claimed to be not only more efficient, but also with fewer emissions and no lead.

Though AGE85 weighs a bit more than 100LL and included a performance penalty under 13,000 feet MSL, it met FAA performance, materials compatibility and engine-component wear criteria. According to Texas Skyways, it was approved for use in several different models of Cessna aircraft equipped with Continental engines after the engine wear observed following a 500-hour endurance test was minimal. STCs are listed at www.age85.org, and continued research shows that AGE85 does not damage fuel pumps, tanks, hoses or seals the way pure ethanol does. At the time, corn ethanol was selling for a little under a dollar a gallon, and estimates were that AGE85 could be pumped into aircraft fuel tanks for a little more than that. But it has not happened.

Now Purdue University scientists John and Mary Rusek have concocted a biofuel called SwiftFuel, which looks, feels and burns like 104 octane avgas. Swift Enterprises claims that SwiftFuel is 15% to 20% more fuel efficient, has no sulfur emissions, requires no stabilizers, has a 30 lower freezing point than 100LL, introduces no new carbon emissions and is lead free. The Ruseks also claim that the components of SwiftFuel can be reformulated into a replacement for jet/turbine fuels.

The best bit of information to come from the Swift group is that research shows SwiftFuel can be mixed with mogas, which means it can travel in the same trucks, through the same pipelines and even sit in the same storage tanks, eliminating the expensive purity and segregation issues that have plagued 100LL throughout its life.

This is all good news for operators of piston engines. Mary Rusek is confident that the simplicity and efficiency of the SwiftFuel concoction process means that manufacturers of the fuel could quickly meet the demand, which is currently projected at 1.8 million gallons a day, by using only 5% of the current U.S. biofuel producers.

Intriguing, but after a decade or more of promises, you’ll have to count me among the skeptics. I purposely chose engines for both of my kit airplanes that can burn mogas, though I refrain from operating that way for the moment because of the ethanol dilemma. My advice to you, builder friends, is to consider it all.