Most of you know my opinion about the value of a good aircraft mechanic. Heck, I married mine. You won’t get a better recommendation than that (from me, anyhow). And he’s in fairly good health, so don’t come knockin’, honey!

Better still, my mechanic-husband cut his teeth in Experimental aviation. His first FAA maintenance-type certificate was the Repairman’s Certificate on our Kitfox IV, which he received in 1993. Eight years later, and much more experienced, he spent two weeks at a “finishing school” in Tennessee before testing for his full Aircraft & Powerplant certificate. The time in-between he spent working on warbirds and certified aircraft under the supervision of an IA, which is an FAA-certified A&P who has tested to have Inspection Authorization added to his certificate. The IA can sign off major repairs and, of course, annual and progressive inspections on aircraft (not that those are required for Experimental aircraft). Further, IAs typically have the background and experience to understand the subtleties of aircraft construction and repair that can help decipher complicated or intermittent operational issues. They should also be well-versed in the ritual paperwork required to keep aircraft and their parts legal, no matter what airworthiness certificate they carry. 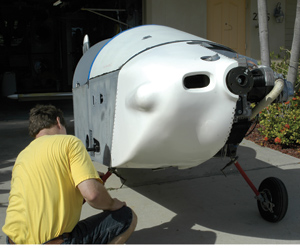 It is best not to get too far into a build without letting someone skilled, with practiced eyes, have a look. Frank Schooley has his Sonex up on its wheels with the engine hung; it is just about time for another tech counselor visit.

The Hub (an apt nickname for my husband on so many levels) logged his time, for lack of a better term, as an apprentice, and it paid off. He was able to have his logs certified by the FAA and was credited for the time he spent helping out. This saved him 18 months of A&P school that it turned out he really did not require, because he was able to pass the oral, practical and written FAA exams with just two weeks of classroom time under his belt. The benefits of the A&P certification have been well worth the effort. As a certified A&P, he can now work on any Experimental aircraft, as opposed to only those for which he has a Repairman’s Certificate. It also qualified him as an EAA technical counselor, a role he was happy to take on for his local EAA Chapter 565, in Punta Gorda, Florida. All EAA technical counselors have either built an Experimental aircraft or restored an antique/classic aircraft, are A&Ps or IAs, DARs, DERs or aerospace engineers in the U.S., or hold equivalent international ratings, or have the qualifications for those ratings. They are listed on the EAA rolls as available to builders in their regions as advisors.

What’s in It for You?

A tech counselor won’t (and shouldn’t) build your aircraft for you. What he or she will do, and what the Hub often finds himself doing, is volunteer to inspect your aircraft at key moments in the construction process, as in before you close the wings or mount the engine, or just before you call the DAR to perform a final inspection and issue an airworthiness certificate. He will double-check your work and ensure that you have a quality and trouble-free build. The EAA recommends a minimum of three technical counselor visits over the course of construction. 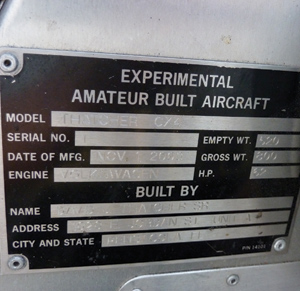 The data plate says it all: This airplane is a one-off, but that does not mean Dave Thatcher built it alone. He had a tech counselor from his local EAA chapter make sure that the building techniques, materials and quality were up to spec.

The concept behind the EAA tech counselor program is laudable. It is the type of program that enhances the quality of all Experimental aircraft, and it costs nothing to the builder except time and the willingness to allow the project to be inspected by an educated eye with a bent toward quality and safety. Yet, not every builder uses a tech counselor’s services. How do I know this? Because Experimental aircraft still fall out of the sky, or fail to even get into the sky. The NTSB accident reports tell the stories better than I can. Consider this example:

Inspection of the engine compartment by NTSB, FAA and representatives of the airplane designer before and after recovery revealed the right exhaust manifold was secured to an aluminum exhaust manifold adapter only by the upper two bolts. Further inspection of the upper two bolts revealed no evidence of safety wire. Following removal of the right exhaust manifold, all four threaded holes of the exhaust manifold adapter were noted to be stripped, consistent with heat damage. Further inspection of the right side of the engine compartment beneath the exhaust manifold revealed the insulation of the crankshaft synchronizer and timing electrical wires was heat damaged, exposing the wire conductor of two of the wires. Chafing through the insulation to the conductor wire was also noted in a straight line across two of the crankshaft synchronizer and timing electrical wires; the chafing was oriented nearly perpendicular to the wire length. Operational testing of the synchronizer and timing sensors system using the airplane’s battery power revealed satisfactory results, even with manipulation of the heat-damaged synchronizer and timing wires. The engine was then put through several rotations using the starter, and the ignition system was noted to be operational. With battery power applied, the chafed electrical wires were then placed against the right lower longeron, and the ignition system became inoperative.

The engine lost power shortly after takeoff. The Rotax 582 UL engine was disassembled and examined. In attendance were the NTSB and Rotax. Some of the discrepancies noted were: (1) the clutch system was aftermarket (non-Rotax) and the friction plates were worn and loose; (2) the exhaust system had been modified contrary to installation requirements; (3) placement of the EGT probes were not of the required distance from the exhaust port (according to the installation manual); (4) fuel lines had been routed contrary to installation requirements; (5) required factory vent holes were not in the carburetor vent tubes, and the vent tubes were less than 50% of the effective area required to vent the float chambers; (6) carburetor retaining sockets were over-torqued, extruding the rubber gasket from under the clamping band; (7) the throttle cable return springs had been shortened, and the jet springs adjusted to the leanest fuel flow position.

A tech counselor would have noticed the lack of safety wire as well as the potential for chafing of the ignition wires. And the tech counselor certainly would have picked up on the numerous engine installation issues on the Rotax. You might ask why the DAR or FAA Safety Inspector who signed off the aircraft for flight didn’t notice these serious discrepancies? Well, I’ll tell you, but what I’m about to say might not be popular.

The DAR/FAA Safety Inspector who signs off your aircraft for initial test flying does so primarily based on two criteria: that the paperwork you submitted verifying and documenting your aircraft build is true and correct, and that it appears you have built the aircraft to FAA specifications for the airworthiness certificate for which you are applying. Some DARs and FAA Safety Inspectors know well the aircraft they are inspecting. A few might even have aircraft construction or actual aircraft maintenance experience, and a very few might have intimate knowledge of the precise aircraft type you have constructed. They might look over the aircraft closely enough to pick up on possible discrepancies, installation errors, hazards or other unsafe construction configurations.

But many do not, and that is not the principal reason they are inspecting your aircraft. They are there to determine if you built it, and if you have accurate documentation and have registered for the airworthiness certificate. Some will tell you where to put your EXPERIMENTAL warning labels, and little more.

They won’t necessarily notice a potential for delamination on a composite aircraft, such as the bad bond that caused one locally built Wheeler Express to come apart completely when brought in for stripping and painting (that aircraft, repaired, later lost its nosewheel on fast-taxi tests). And if you’ve installed an automobile engine or other non-certified powerplant? Most can’t, and won’t even begin to help you improve your airplane’s safety. 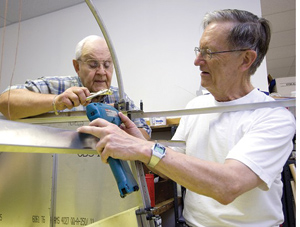 The tech counselor won’t build the airplane with you, and certainly should not be building it for you, but most will help out with any tough spots.

There’s one other little secret many builders won’t tell you: They are delighted to receive an airworthiness certificate and test flight limitations from these guys, and that is all. They don’t really want a DAR or an FAA Safety Inspector to look too closely at their projects. The reasoning? Why have an FAA guy find a mistake and refuse to give you your hard-earned paperwork? Why have an FAA rep or DAR even think they’ve found a mistake and shut you down? Better to have that discussion with a volunteer tech counselor (someone who can’t keep you from flying, but can give you good advice borne of experience) weeks before, when you have time to correct any issues before an official inspection takes place, and, more important, before you ever fire up your new aircraft to fly it.

In an effort to provide full disclosure here, one of the other hats I wear is FAAST team member, a volunteer position as a safety advocate for the FAA. And, yes, this particular safety item has become one of my soap boxes. But come on, you have to admit it is a good, necessary soap box. The safety record for first flights of Experimental aircraft is something we still have to work on; even the EAA will readily admit that, and it has been in the business (successfully so) of providing tech counselors to builders since the mid-1960s. Just this past summer aerospace engineer and USAF Test Pilot school graduate Terry Lutz, an EAA tech counselor, was quoted at AirVenture challenging the other tech counselors and flight advisors there to help him cut the accident rate in Experimental and other general aviation aircraft by 50% in the next decade. With the Experimental fleet’s accident rate being notably higher than the overall accident rate for U.S. registered aircraft, we have work to do.

But nothing will change if builder habits don’t change. So if you haven’t done so already, look into the possibility of bringing in a tech counselor to check your work. The reassurance that you are building things right will help your confidence, and the possibility that a fresh, educated eye might catch a problem before it becomes a disaster could be a gift you’ll appreciate, along with your flying project, for years to come.

EAA Tech Counselor listings can be found at www.eaa.org/techcounselors.