Consider the lowly duck. It can walk on land, paddle about like a boat, dive underwater and is a strong flyer. Our airplanes, on the other hand, spend 99% of their time stuck at the airport where they can barely get around under their own power, and few can venture on water. They are expensive toys that contain most of the elements of a ground vehicle-a cabin with seats, engine, wheels and brakes-but cannot be driven home and back to the airport. Perhaps thats why the idea of an aircraft that can provide door-to-door transportation has captivated the attention of some talented designers almost from the beginning of aviation and automobiles.

There are few pure flying machines, and multimode vehicles inevitably have compromises. Airplanes themselves are sometimes defined as compromises flying in close formation. The primary challenge of producing a practical roadable aircraft has been to achieve the minimum compromise between the flight and road modes. Another challenge is to minimize the weight penalty and, to a lesser extent, the additional drag caused by the road gear.

Literally hundreds of important design choices must be made. Should the flight and road components each have their own engine, or should there be a single engine with a more complex driveline? Does the flight hardware need to be left at the airport? Can the flight hardware be towed as a trailer on the road or, better yet, fold within the body of the roadable portion? How many seats should it have? How many wheels: three or four, a car or a motorcycle?

Most would agree that certain qualities are important to the success of a roadable aircraft. Safety for new and low-time pilots is a prime consideration, requiring benign handling characteristics. It is crucial that the time and effort required to do the conversion between road and flight modes is minimal. One must be able to take flight hardware with the road vehicle either as a trailer or onboard, making safe cross-country trips practical. Reasonable performance on the ground and in the air is crucial. Having freeway capability on the ground and over 120-mph cruise speed in the air are desirable. A reasonable purchase price, maintenance and operating costs are also desirable. Thats not asking for much: half the capabilities of the duck for not many bucks.

Its Not That Simple

If it were easy to do, there would be many roadable aircraft designs available today. Although there have been credible designs built in the past, making the jump from prototypes to production has not yet occurred for a variety of reasons. Clearly, roadable aircraft are not impossible to build. It’s just that no one has gotten all their ducks in a row yet.

Before we look at some notable examples of roadable aircraft from the past, we should mention VTOL (vertical takeoff and landing) aircraft as potential door-to-door vehicles. Powered lift is expensive. To date the most successful VTOL has been the helicopter, and it is even more payload-challenged than a conventional light plane. In most places, you cannot operate a helicopter from your own home, because the neighbors wont stand for it. Other types of VTOL aircraft are even more neighbor unfriendly than the helicopter. So it looks like well have to fly our roadable aircraft from existing airfields. Anyway, the challenge of mating a road and flight vehicle is tough enough without trying to make it go straight up.

One of the more successful pre-WW-II roadable aircraft was the Pitcairn AC 35 autogyro. It was a contestant in a design contest sponsored by the Bureau of Air Commerce to encourage the development of more practical light aircraft. Notable features included two steerable front wheels and a single powered rear wheel, making it a motorcycle on the road. The big plus for an autogyro is the ease of folding the rotor blades so that the flight hardware has minimum impact on the road vehicle. Newsreel footage of the AC 35 aired on television showed it landing in downtown Washington, D.C. and driving to the Commerce Department.

From the same time frame and developed from an entry in the same design contest is the Waterman Arrowbile, with its six-cylinder Studebaker car engine and three wheels (single front wheel), a motorcycle configuration. The one-piece, strut-braced sweptback flying wing of the Arrowbile was removed and left at the airport when the vehicle was in the road configuration.

At the end of WW-II, the Fulton Airphibian, the first roadable aircraft to achieve certification, was built in small numbers. It had a four-wheel car-like undercarriage, and the propeller, wings and tail cone would detach and be left at the airport while the cabin portion was driven on the road.

In a coincidence that makes one believe in providence, I found a copy of Daniel R. Zucks book, An Airplane in Every Garage. Zuck was an aerospace professional who worked in Southern California and built two prototypes of a roadable aircraft called the Plain-Mobile around the time of WW-II. His depiction of the aviation transportation system in the 1958 book is much like what NASA is proposing now. One of the interesting features of his designs was the use of a floating wing concept for safer flight handling and to help resolve the problem of using the same wheels as road and landing gear. He could control the wing incidence without having to rotate the fuselage on the maingear. The strut-braced high wings would fold and rotate to store on top of the fuselage in the road mode, with two wheels in front and a single powered rear wheel. His ideas for more advanced configurations look modern today. The last chapter in the book is a description of a future cross-country vacation trip with a roadable aircraft set in 1963.

Still Locked to the Airport?

What lessons can we learn from these examples? Its obvious that having to leave flight hardware at an airport limits the utility of a roadable aircraft. So score points for the Aerocar, Plain-Mobile and the AC 35 autogyro. One of the factors that kept the Aerocar from going into production was the looming increase in automobile regulation. However, the use of a three-wheel running gear puts a roadable aircraft in the motorcycle category, where regulations are easier to comply with. A common thread among many of these projects was the inability to get the financing to go from the prototype to the production stage. The time was simply not right.

Is the Pitcairn AC 35 the model for todays roadable aircraft? I think not. The pool of potential buyers with rotorcraft ratings, and the number of training autogyros and instructors is so small that the chances for commercial success are limited. And there are still some safety and efficiency problems with autogyros compared to conventional aircraft, though Im sure Jay Carter, Jr. is doing his best to prove me wrong about that.

The dream of the visionaries will remain just that until someone reduces it to hardware that can be bought and used to develop and prove the usefulness of the roadable aircraft concept. The proper home for roadable aircraft is the homebuilt Experimental market. Some dedicated enthusiast will build a successful prototype, and hopefully be able to make the transition to a successful kit program. I have recently met K.P. Rice, and he may have the right stuff to make it happen.
Like Molt Taylor and Daniel Zuck before him, Rice is an aerospace professional and has spent many years refining his roadable aircraft design. Our EAA chapter president has been trying to get him as a speaker for years, but until recently, he wasn’t ready to talk about his work. He is now in the testing phase of his second prototype, which he calls the Volante Flying Car. The first version had canard flying surfaces and undesirable pitch changes with power. The current version is a two-place, side by side, composite, twin-boom pusher with conventional surfaces. Although Rice calls the Volante a flying car, it has three wheels with a single front wheel and is registered as a motorcycle.

The road portion of the Volante has its own powertrain, taken from an ATV. The flight portion, including its Lycoming O-320, folds and becomes its own trailer, which can be towed behind the road portion. On the surface, having two engines seems like a needless weight penalty. But Rice explained that while there is a small weight penalty, having an off-the-shelf powertrain for the road portion eliminated the complexity of developing a driveline from the aircraft engine to the wheels. The two-engine configuration also avoids using up the expensive airplane engines life while on the ground. Another complication avoided by the two-engine layout is that the road portion can have its own fuel tank for auto gas. Avgas is illegal to use on the road, and auto gas is difficult to get at airports. Furthermore, a valuable marketing advantage of the two-engine configuration is that the buyer can complete the ground vehicle first and have something usable before making the commitment to buy the more expensive aircraft portion.

A roadable aircraft can reduce the cost of flying-a good thing. One would expect a flying car of the take it with you type to be kept at home, avoiding the airport storage fees. With Rices design, the road portion could take the place of an economical second car, and by going the kit route, he avoids the expense of certification of both an aircraft and a road vehicle, meaning reduced costs.

Rice shares the dream with Daniel Zuck, the other pioneers and NASA that the light plane can some day be a much more important part of our transportation system than it is today. The door-to-door utility of a roadable aircraft can help make that happen. I feel certain that the revolution will be started by people building roadable aircraft in their own garages. They will not be flying cars or VTOL investor scams, nor will they be certified. They will be homebuilt flying motorcycles.

Rice is now at the stage that has done in many of the roadable aircraft developers. He has a prototype that shows every evidence of becoming a good flying aircraft with a very usable road-going component, in essence a practical roadable aircraft. He has correctly identified the kit route as the way to production. Infinitely less expensive than the certified route, going to kit production still requires significant capital. But while the technical challenges of developing a roadable aircraft are great, they are not insurmountable, as Rice and past pioneers have proved. What so far remains undone is making roadable aircraft into a business. What Rice needs now is the right kind of investors. Lets hope he can get his ducks in a row. 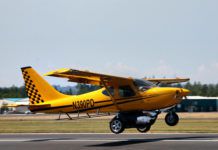 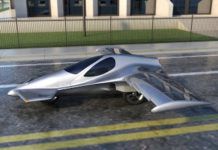 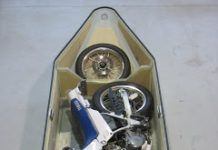 You CAN Take It With You 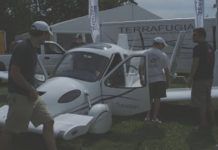