Parked in front of the AirVenture Canada tent is a red and white DR-107 “One Design” registered C-GPIO.

Its builder, Jeff Seaborn, is here representing the Canada EAA Council. He flew his airplane her from Calgary, so it could be shown as part of the EAA Canada exhibit at AirVenture.

Jeff describes his aerobatic experience as “doing gentleman’s aerobatics in my RV-7.” When he became interested in doing more serious acrobatic flying Jeff chose Dan Rihn’s DR-107 “One Design” as the airplane to take him to the next level. It took him 7 years, and 1300 hours to build his airplane, registered C-GPIO. The inspiration for the registration came from a discussion of pilot-induced oscillations (PIO) during a Sportair workshop on test flying your homebuilt. Jeff says that about 5% of the people he talks to get the allusion. (one person thought it was a Star Wars reference to C-3PO).

The airplane is powered by a Lycoming AEIO-375 turning a 3-bladed Catto composite propeller.

Jeff says he is “having so much fun” developing his aerobatic skills in the airplane. He recently took a course on becoming an aerobatics judge, which he says gave him a new-found appreciation for the precision flying required for competition aerobatics. “Everyone starts out perfect, but there are so many ways to take points away.” He has not yet flown his DR-107 in competition but is planning to do so in the near future.

Until the day of his first competition, Jeff is enjoying his airplane, and commented that his RV-7 is getting lonely, because he now only flies it when he takes someone for a ride. Most of the time he flies C-GPIO, working to learn the capabilities of the airplane and build up his aerobatic skills. 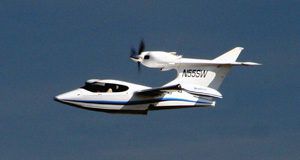