Waiex N37YX flew for the first time on October 14, 2007. It took slightly over two years and 1600 hours to build. It is a trigear sport trainer version with an 80-hp AeroVee engine turning a Prince Aircraft propeller. Cockpit instrumentation includes an expanded scale Winter airspeed indicator and Stratomaster flight, engine and altitude/compass instruments. Both the airframe and engine were kits from Sonex Aircraft. N37YX performed well as expected on the first flight. Thanks to my technical counselors Scotty Markland and Rod McFarland, and my flight advisor Brian Meyer.

I started my Challenger II CW in 2000, working on and off for the next seven years. In that time I got my ultralight license with USUA and my Private Pilot license flying a Cessna Skyhawk. I received my airworthiness certificate in October 2007. I enjoyed the building process, focusing only on the task at hand. This helped to keep me from getting overwhelmed with the whole project and doing each task with the highest quality possible. I added a pectoral fin on the bottom of the tail section, which helps in directional stability and increased aileron efficiency. Quad City Ultralight Aircraft was a great help with all my questions on the phone. The kit is well established in North America, so there is a lot of information on the web in regard to construction. I have six hours on 3055K, and all of the numbers are as published-the view is even better. I share hangar space in Lompoc, California, with Chuck, another Challenger builder. I can see only fun in the future with all the best flying still ahead.

A highly modified AMF-S14 Meranda was first completed in 1984 and built as per plans with an all-wood structure and an O-320 Lycoming. A total rebuild was completed in 2005 with a new steel tube frame, a 200-hp IO-360 Lycoming with a Hartzell constant-speed prop. Here it is pictured on a pair of EDO 2440 floats.

The first flight of our Series 7 Kitfox was on May 19, 2007. The plane is covered with Poly-Fiber fabric and painted with Aerothane paint. The construction of the plane took three years. Power is from a Jabiru 120-hp engine that gives quick response and a 1400-fpm rate of climb. The satisfaction of seeing the plane fly made the building process all worthwhile. Thanks to Bruce Lina for letting us fly his Kitfox before our first flight.

I built a Challenger II Special because I wanted a tandem, high-wing, well proven design. Construction took a slow-paced year, which included jigs that allowed me to rotate the major parts by myself. The kit is well designed, but I did incorporate some minor changes such as making the nose, wingtips and windshield easier to remove for service. The tower between the rear seat and engine has removable aluminum panels rather than fabric, which makes working on the wiring and fuel systems easier. An electric trim with a switch on the control stick makes flying less physical. The electric starter caused some c.g. problems, but those were solved by building a battery that mounts between the front rudder pedals. The Special is loads of fun to fly and reminds me of the J-3 Cubs I started with more than 55 years ago. Slipping is so easy that it makes it difficult to mess up a landing. The viability makes it a perfect platform for looking for deer and lost cattle. The tail of the empty aircraft normally sits on the ground and made it a chore for my high-time body to crawl in, so I designed a tailwheel trolley that holds the aircraft semi-level. Now I can easily slide in, and the resulting c.g. shift causes the nose to drop just enough to disconnect from the trolley. The trolley also makes moving and working on the aircraft much easier.

I took my first demo flight in an ultralight near Kamoka, Ontario, in 1985. At that time I was 20 years old. I stated then, Someday I will have my own airplane. It took 19.5 years of dreaming to begin to see the reality of this statement. In August 2003 my wife and I decided that it was a good time to order the first part of our kit. That November we began building, and in the summer of 2006 we launched C-IRAV, a Quad City Challenger II advanced ultralight. This aircraft has Puddle Jumper amphibious floats and is powered by a Rotax 503 DCDI engine. We have an EIS to monitor the engine and analog gauges for flight monitoring. Though we had no experience in painting, we purchased some low-end gear and painted the entire aircraft ourselves. Since September of 2006 I have been building my skills and learning the flight characteristics of the Challenger. This being my third summer of flying, I hope to venture further from home base and hopefully do a little cross-country flying. I would like to thank my wife, children and all of my family and friends for their assistance and support in making my dream come true. Special thanks to my late mom and to my dad who always believed I could do this. God bless you all. Don’t ever give up on your dreams!

Submissions to Completions should include a typed, double-spaced description (a few paragraphs only-250 words maximum) of the project and the finished aircraft. Also include a good color photograph (prints or 35mm slides are acceptable) of the aircraft that we may keep. Please include a daytime phone number where we can contact you if necessary. Also indicate whether we may publish your address in case other builders would like to contact you. Send submissions to: Completions, c/o KITPLANES Magazine, 203 Argonne Ave., Suite B105, Long Beach, CA 90803. Digital submissions are also acceptable. Send text and photos to editorial@kitplanes.com with a subject line of Completions. Photos must be high-resolution-300 dpi at a 3 x 5 print size is the minimum requirement. 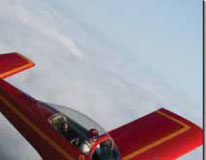