Home Newsline News Everyone Maydays Once

Around the RARA pits, one often hears the racers consoling one another by saying, “Everyone maydays once if you do this very long,” and Mark Frederickson is hoping this was his “once”. He and his Lancair 320, Tenacity, started the Bronze race yesterday in sixth place and they were holding their own for several laps when Mark pulled the plane up and declared a “Mayday”. Cleared to land on runway 8, Tenacity came in under power with no obvious problems. It turned out that the tip-up canopy had popped up mid-way through the race. While not a risk to control and a pretty minor event on most flights, it wouldn’t do to continue racing. Frederickson made the obvious, prudent decision and brought this plane safely back to the ground. Meanwhile, Mark’s wife, Wendy, was with other crew members when they heard him on the radio making the mayday call. While those words can strike terror in anyone’s heart, Mark had added that it was simply a case of an open canopy. Wendy, however, was comforted by remembering that she had been in the plane once when the same thing happened and it had only been an inconvenience. 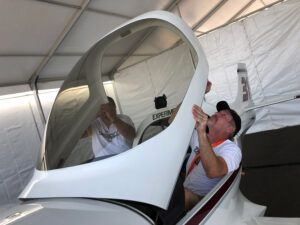 After returning to the pits, Frederickson acknowledged that the same thing had happened a couple of times in the past but not recently. He wasn’t sure of the cause but he did know how he would spend his afternoon. The Tenacity crew spent the afternoon cleaning goop in the holes where the latch pin connects, greasing the latch pin, and removing a thin foam strip on the bottom of the canopy. Mark reports that the latch seems more solid now than ever before and is confident that the problem is solved. In the true spirit of RARA, fellow racers and crew came by to offer tools and help to ensure that Mark will be racing today.

A technical representative from RARA visited the tent in the afternoon to debrief Mark on the incident and inspect what had been done to resolve it. Satisfied that a cure has been put in place, Mark is now relegated to last starter in the Bronze Class heat today.