At last years Copperstate Regional Fly-In, Bruce Vinnola, with volunteer help from the Copperstate staff, successfully completed the second of what will surely become an annual event at future Copperstate gatherings, the Fuelventure 400. As the organizer and promoter, Vinnolas workday started at noon on Friday when competitors mustered in front of a borrowed hangar where each competing aircraft was weighed as it was intended to be flown and then impounded. At 7 a.m. the following day, the 400-mile efficiency flights began.

The concept is simple: Who could fly the route using the least amount of fuel? Knowing the gross weight at the beginning of the flight, the planes were again weighed upon landing 400 miles later, and the difference in weight was calculated to be fuel burn.

Two prizes were awarded for each weight class: Overall fuel burn, essentially who used the least amount of fuel, and overall efficiency which was calculated factoring speed, weight and souls on board. Its like comparing a train to a Prius. Sure the Prius goes further than a diesel-electric locomotive for each gallon used. Advertised at 50 mpg and considering it weighs roughly 1.5 tons, the Prius gets 33 mpg per ton. On the other hand, the train gets 400 mpg per ton, making it exceedingly more efficient. This is basically how the numbers are crunched using the CAFE Foundations equations, which is how they arrived at the second award.

To be more specific, the CAFE formula calculates best aircraft efficiency using this equation: CAFE score = (miles per gallon) x (passenger payload to the power of 0.6) x (speed in mph to the power of 1.3).

There are three weight classes: 1103 pounds or less (500 kg), 1104 to 1654 pounds (501 to 750 kg) and 1655 to 2204 pounds (751 to 1000 kg), all of which are required to average a minimum of 120 mph or greater in the interest of keeping the flights from literally taking all day. All the weights were as flown, calculated from the weigh-in, including occupants. Passengers who wouldn’t or couldn’t be weighed were given a default weight of 200 pounds. Fearing that the RVs would get smoked by some of the more efficient designs, those aircraft were placed in a class of their own. But they are proving to be competitive, and potentially they will become mixed in with the other classes as Fuelventure catches on and is held at different venues throughout the season. 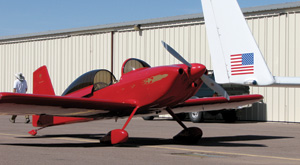 Racetrack in the Sky

The course for the event was Casa Grande (KCGZ) tothe Yuma VOR to Blythe (KBLH) and then on to land at Phoenix Regional Airport (A39). Landing back at Casa Grande, the home of Copperstate, was not practical due to the high traffic from the fly-in.

The winds aloft were not as favorable as last year so some of the numbers are not as impressive for this year, Vinnola said. However, they are still impressive. Klaus Savier and Terry Schubert were among those whose mpg numbers were down from last year. Flying a closed triangle would not have helped much, as winds aloft will always adversely affect any out-and-return type of flight. The decreased ground speed during the upwind leg is not equally offset by the tailwind coming home.

Vinnola carried two Young Eagles during his trek around the course in his three-place E-Racer MK II, but because his passengers were small, his potential CAFE score might have been higher. He had the second highest mpg rating of the four planes in his weight class, but had the lowest CAFE score. He was beat out by the three Lancairs that made a respectable showing this year, with Bill Harrilsons Lancair 320 netting 32 mpg. Scott Alairs Lancair Legacy showed its great utility with good mileage and superb speed for a second place CAFE score in the 1655- to 2204-pound class. Jim Thomas attempted to tilt the CAFE score with blinding speed in his Legacy, but Alairs more conservative flight profile paid CAFE dividends.

Gary Hertzler and Burrall Sanders scratched due to last-minute airplane problems; otherwise, they could have flown home with some honors. Villano said. Fourteen planes total were registered this year; two scratched and two were no-shows, leaving 10 that actually flew the course (See Table 1). 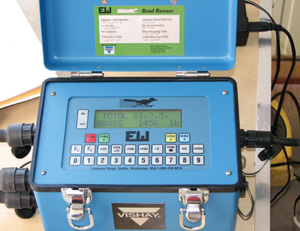 Accurate aircraft weight is used to determine both the class it will race in as well as the amount of fuel used on the course.

The competition strategy varied from pilot to pilot, Villano explained. Extracting the best efficiency, especially with the significant winds aloft was like a chess game. Some pilots climbed to cruising altitudes quickly and others performed very gradual cruise climbs. Some pilots went quickly to oxygen-only levels and maintained the ear-popping altitudes for the course. Others skirted the desert floor on the upwind leg, then climbed high to take advantage of the tailwind, while other pilots varied altitudes very little. Many of the pilots cruised at higher speeds on the upwind and reduced speed on the downwind. Others just went with their best efficiency speeds for the whole course. Ive flown a few RACE events in my E-Racer, and I think the Fuelventure competition is much more fun and much more of a challenge for my piloting skills than slamming the throttle against the panel then flying a straight and level course. Its also a heck of a lot easier on the airplane.

The 1103 pound (or less) weight class was void of participants despite Villanos active prodding of the Quickie Q-2/Q-200 and VariEze communities, reserving the $600 in prize money for the next event. I can think of several dozen aircraft that could have done well in that class. Maybe for 2010.