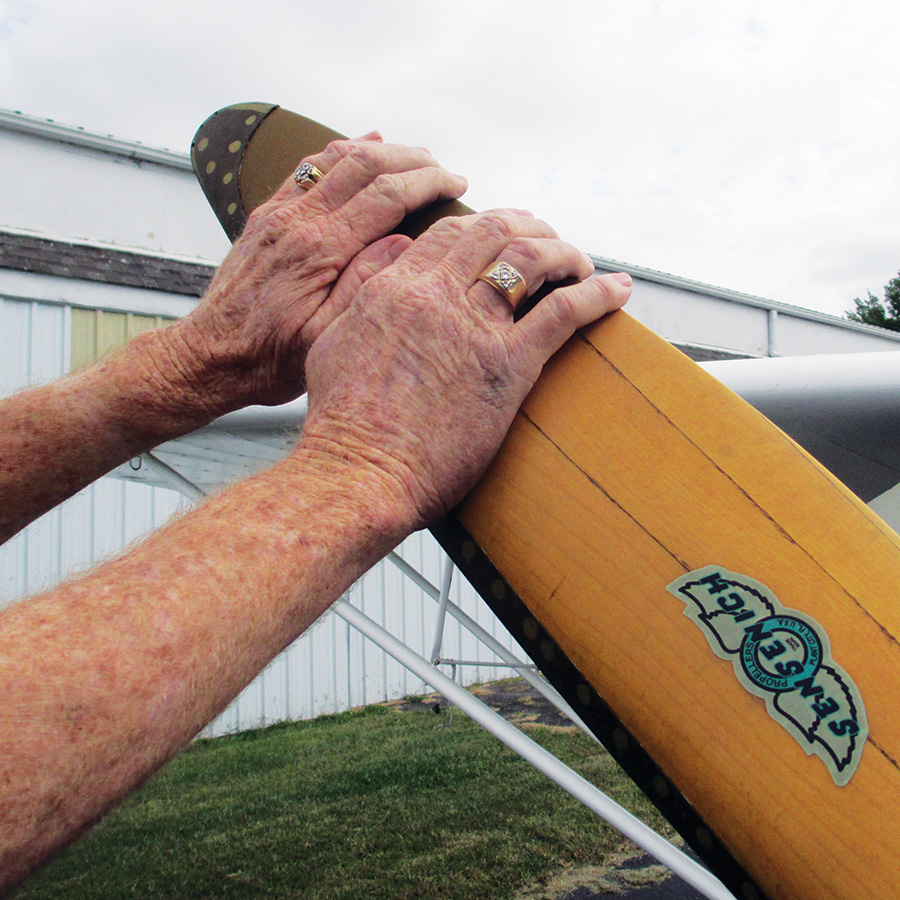 Even in this day of starter-equipped airplanes, there can still exist instances of hand-propping the engine to get the aircraft going. How can this be? In the homebuilt world, there are a lot of small engines in use, like the Volkswagen series or low-displacement Continentals, that are, in the interest of saving weight, installed without a starter or an electrical system. Further, many restored vintage designs are, for purity’s sake, left incapable of self-commencing. With these aircraft, our only choice is to swing the propeller after careful priming and preparation.

You may also have witnessed a stranded pilot with a low battery or an inoperative starter, attempting to apply arm muscle to his propeller in an effort to get underway. In some cases, this is perfectly logical and safe—if he or she knows what they are doing. But, in a great many cases, it’s not a good idea at all. 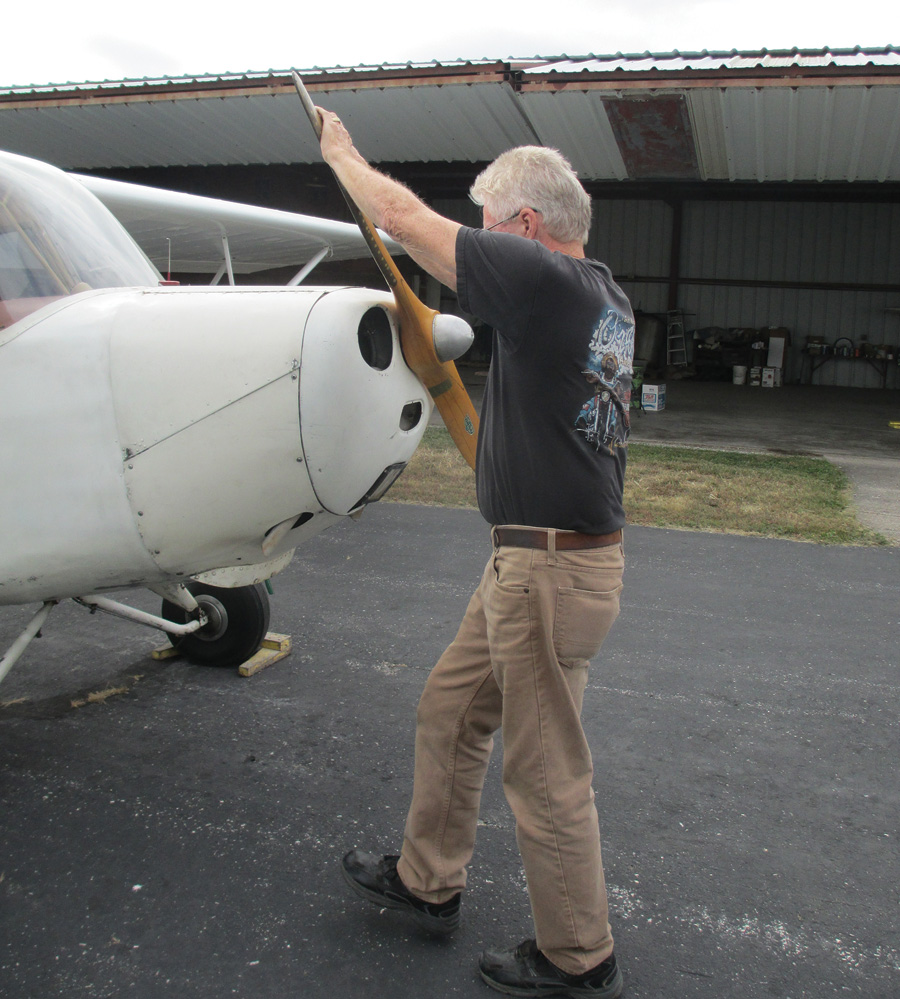 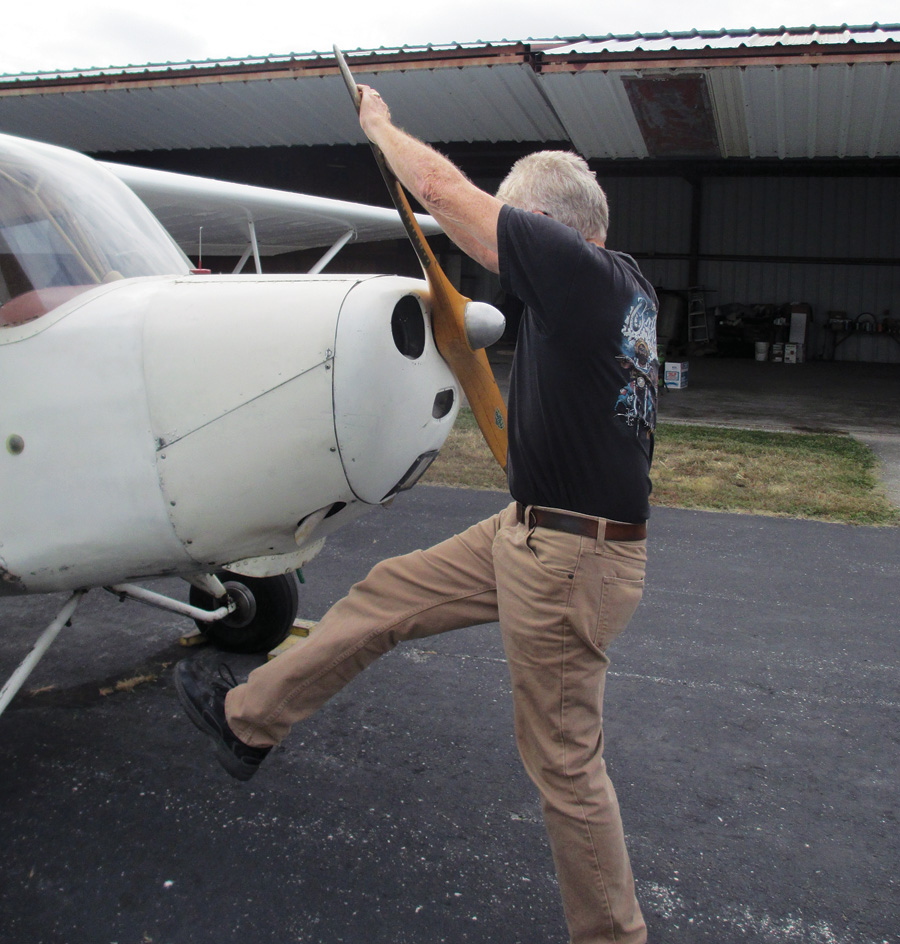 Getting head start on swing by raising step-away leg; looks dangerous, but the leg will be well away as the prop is pulled through. 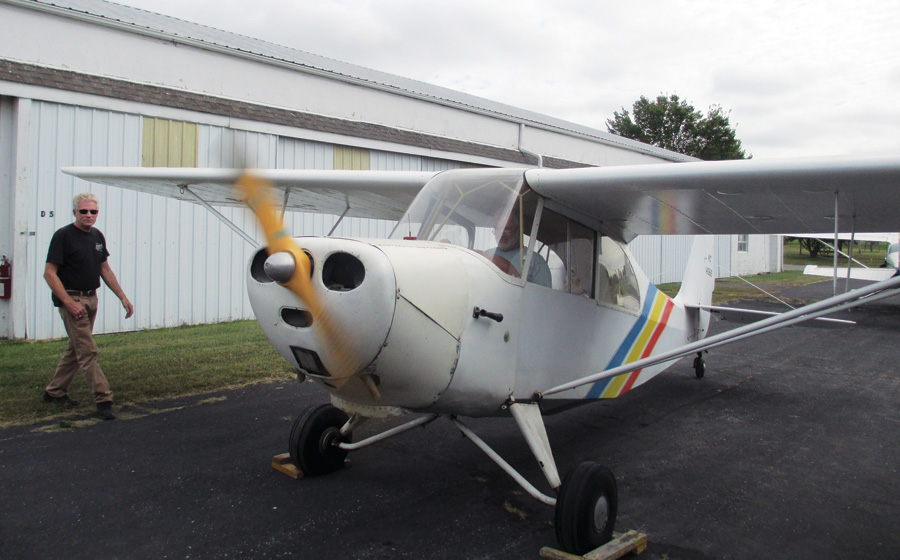 Now that the engine is running, chocks can be removed, approaching from wingtip.

To Prop, or Not to Prop

I have the distinct advantage of having grown up with early exposure to the concept of hand-propping an aircraft. As a stripling youth, I was an airport bum, ready to perform all tasks that might get me some air time. If I wanted to ride in the then-young Aeronca 7AC, I had to help get it started. As the gas pump attendant, I would cheerfully offer to prop a transient pilot after topping him off.

Back then, even though it was common, propping was not taken lightly. We airport kids were given a class on how to safely prop a plane, from pilots who had done it routinely for years. Exactly like gun safety, it was impressed on us to never be careless or casual with the propeller. That is what I’m going to pass along to you in this article. There’s a time and place for propping; know when to, and when not to.

Propping was an easy procedure for low-compression engines installed in tailwheel airplanes, where swinging the blade used the leverage of a head-high propeller hub. It was always expected that a knowledgeable individual, capable of holding brakes and manipulating ignition and throttle, would be in the cockpit. Given these parameters, propping was safe and simple. Even when starters were installed, we always knew we could prop the airplane if the battery was flat.

As modern aircraft acquired features like tricycle gear, which lowered the propeller to chest height or below, and electrically driven boost pumps and starting vibrators were installed, it became impractical to hand-start the aircraft with a dead battery. The trigear plane’s prop blade was awkwardly low, and battery power was a necessary item. And, since most airplanes built from the 1960s on used alternators instead of generators, a dead battery wouldn’t excite the alternator field, so even if you got the engine running you wouldn’t have the ability to recharge the battery. Propping became almost a forgotten art. 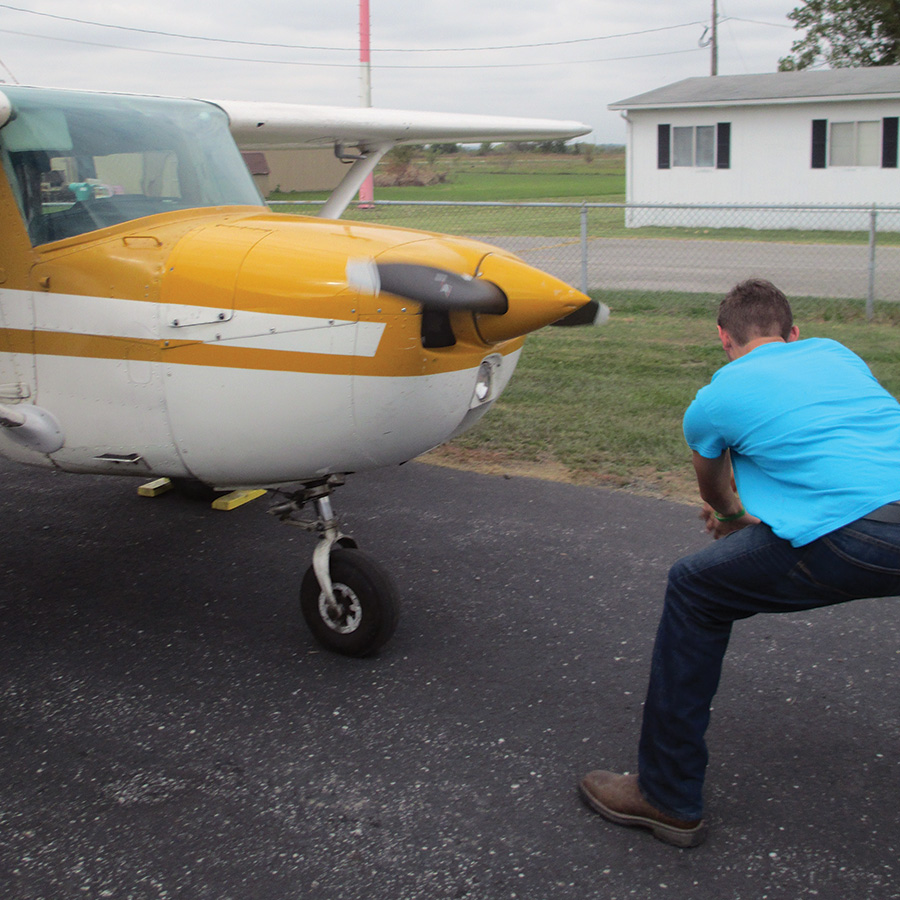 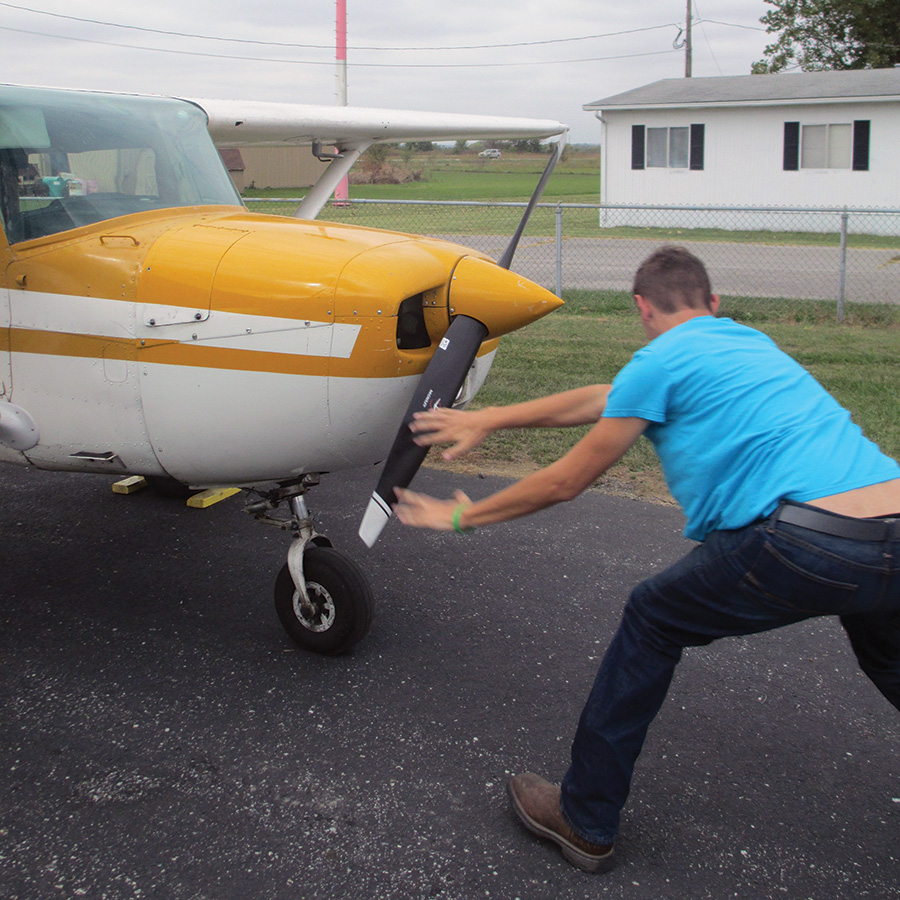 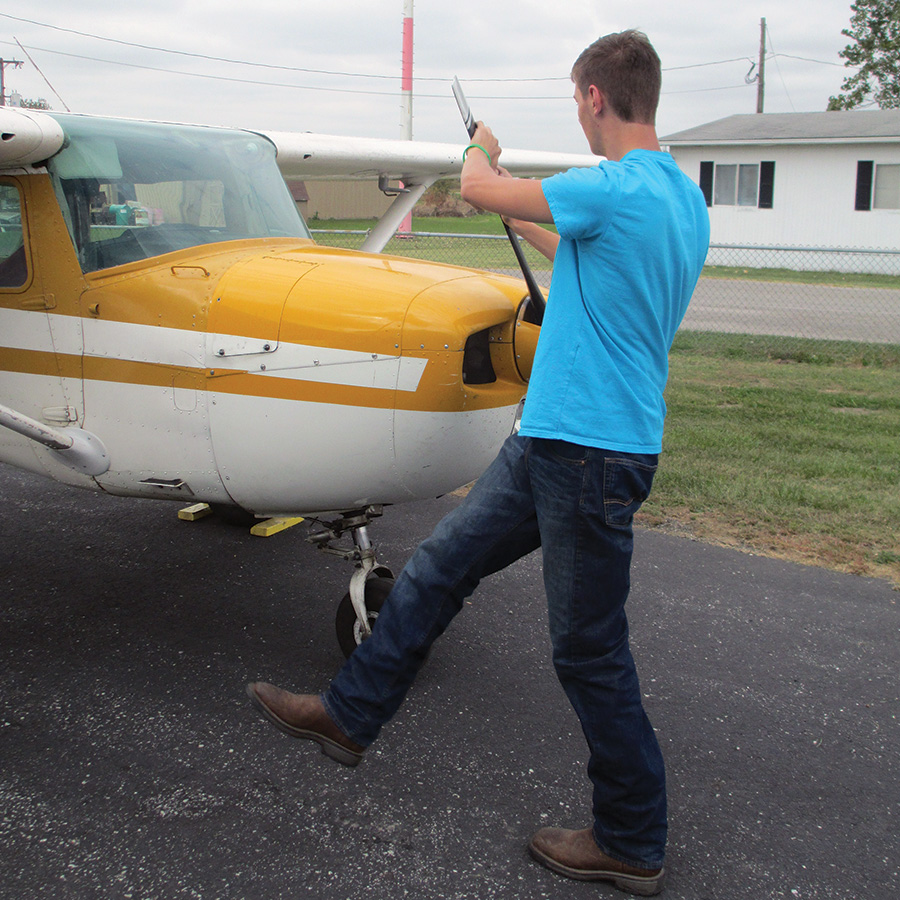 Better close-up stance, but will result in leaning in due to low propeller.

As we said, tricycle gear places the propeller much lower than a tailwheel’s stance, requiring the propping person to crouch or bend over as the blade is pulled through. Some engine and propeller combinations can result in the compression stroke occurring at a low point on the prop’s swing. These features result in a dangerous position for propping; any slip or stumble causes the person pulling the prop to fall into the propeller arc. Ideally, you want to stand erect, in a position to fall away if you lose balance. The alternative method is to stand behind the prop and step back toward the cockpit while propping, a style preferred by Piper J-3 pilots, and necessary for floatplanes not equipped with starters.

The typical starter or battery failure scenario that tempts a pilot to try hand-propping leaves a Lycoming engine’s starter drive engaged. This adds even more resistance to swinging the propeller, making it very difficult and dangerous to try a hand-start. If you’ve ground a Lycoming engine’s battery flat attempting to start, you may as well leave it alone until you’ve charged the battery, or rigged up a jump start.

Again, if the problem is a dead battery, there’s a good likelihood the alternator won’t excite, even if you do get the engine running, so you should hook up a charger, put some juice in the battery, and/or do a jump start from a compatible power source. As you can see, there are a lot of reasons to not even attempt hand-propping modern aircraft. 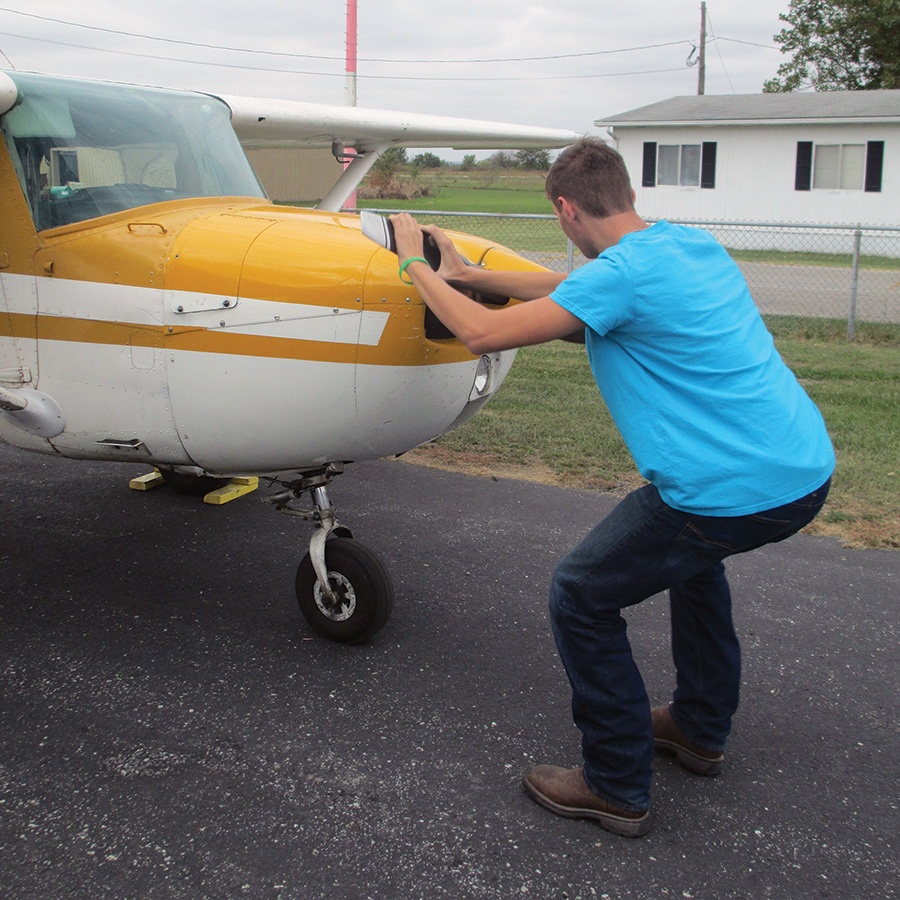 Better close-up stance, but will result in leaning in due to low propeller.

Assuming you are working with an aircraft and engine that’s suitable (tailwheel gear, low compression, no electrical needs), how is the best way to go about it? Start with getting some help; propping alone raises the risk level exponentially. The person assisting with the start needs to be qualified to run the controls, hold the brakes and make a shutdown without panicking. In other words, a pilot familiar with the aircraft—and also with the procedure of hand-propping.

Rule One: The guy handling the propeller is the boss. The person in the cockpit needs to do nothing other than what is directed from outside and must confirm each instruction verbally. Terminology needs to be clear and concise; no confusion. Don’t try propping in a noisy environment where your commands may be unheard or misinterpreted. Wait until things calm down. Make sure the person at the controls knows the ignition key is to be turned to just “both,” not the “start” position.

Rule Two: Take precautions. Secure the aircraft with chocks and even tiedowns, just in case the throttle is inadvertently advanced to taxi power or the brakes don’t hold. There may be a need to switch pilots after the engine’s running, so be sure the plane won’t move. Make sure everyone gathering to watch is out of the way and knows to stay away when the prop’s turning.

Rule Three: Practice safe prop-swinging. Don’t prop an aircraft while standing on slippery surfaces, loose gravel or with loose clothing that could snag on a blade. Don’t stand too far away and lean toward the propeller; start out close and move back as you swing the blade. Respect the propeller just like a gun; stay out of its way and expect that it could go off at any time.

With the assistant on board and briefed, prime the engine as recommended. Visually confirm that the mags are off and the throttle’s at idle, then reconfirm verbally before reaching for the propeller. “Off and closed” is the command, repeated back by the person in the cockpit. Turn the prop over enough compression strokes to bring the primer fuel into the cylinders, position a blade in a 10 o’clock position so it’s ready for a compression stroke, then step back and instruct “Contact and brakes.” Do not say “switch on”; that’s too easily mistaken for “switch off,” leading to confusion. After hearing “contact and brakes” from the cockpit, nudge the prop hub to see if the brakes are indeed on.

Grasp the propeller blade and pull briskly downward while stepping away, in anticipation of a start. Don’t put more knuckles around the blade than you want to lose, in case there’s a kickback. Your hand should already be away from the propeller as the engine starts, if you’ve stepped away correctly. Put some muscle into the prop swing; snapping the blade down through a compression quickly gets a surer start than dragging it through, and it’s safer because all your precious extremities will be clear of the prop arc.

If the engine doesn’t start, approach the prop carefully and tell the person inside what you want. “Still hot” means you’re going to swing it again; he or she is to leave things as they are. Confirm brakes and repeat the prop swing. A four-cylinder engine will offer another identically-oriented compression stroke; a six-cylinder flat engine or radial may need to be repositioned to place the propeller at the correct location, in which case you’ll call for “switch off” and turn the prop through to position it as needed before again calling for “contact and brakes.”

Never get casual around propellers. Don’t assume that the switch is actually off, or that the P-lead grounding the magneto couldn’t be loose. Even if you were taught to pull the keys out of the ignition and lay them in plain sight on the glareshield, I still won’t trust your propeller. I’ve had my hand slapped by an unexpectedly alive propeller blade more than once. 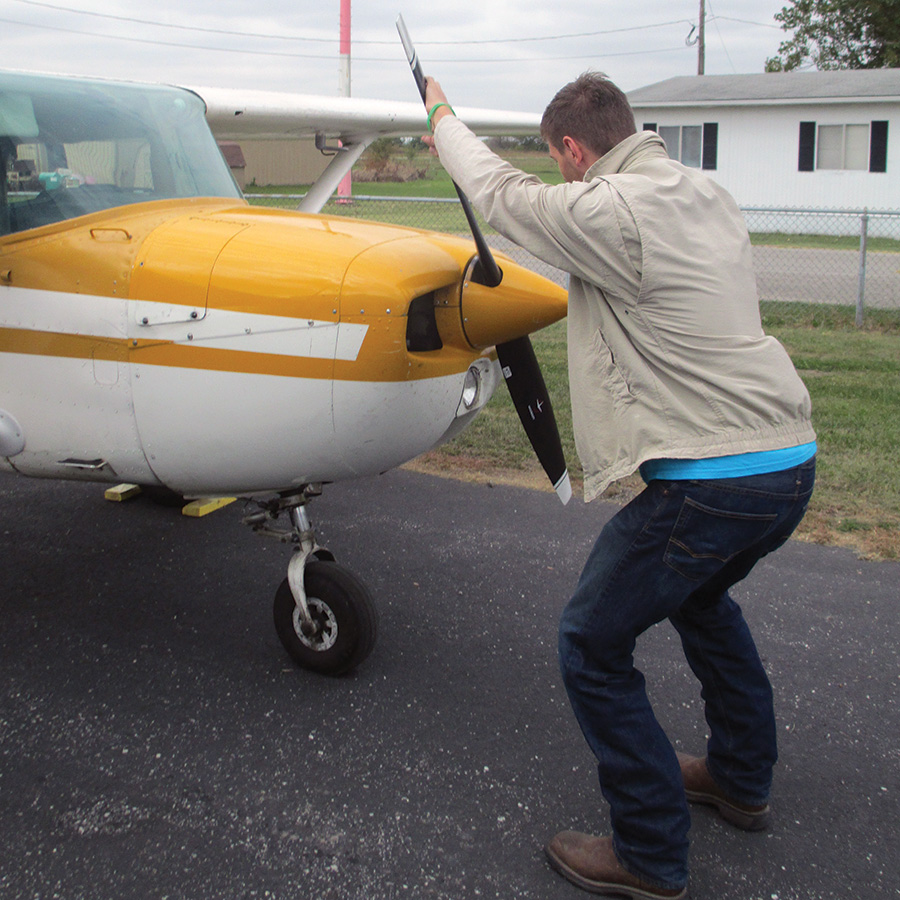 Loose jacket could snag on propeller blade and interfere with swing. 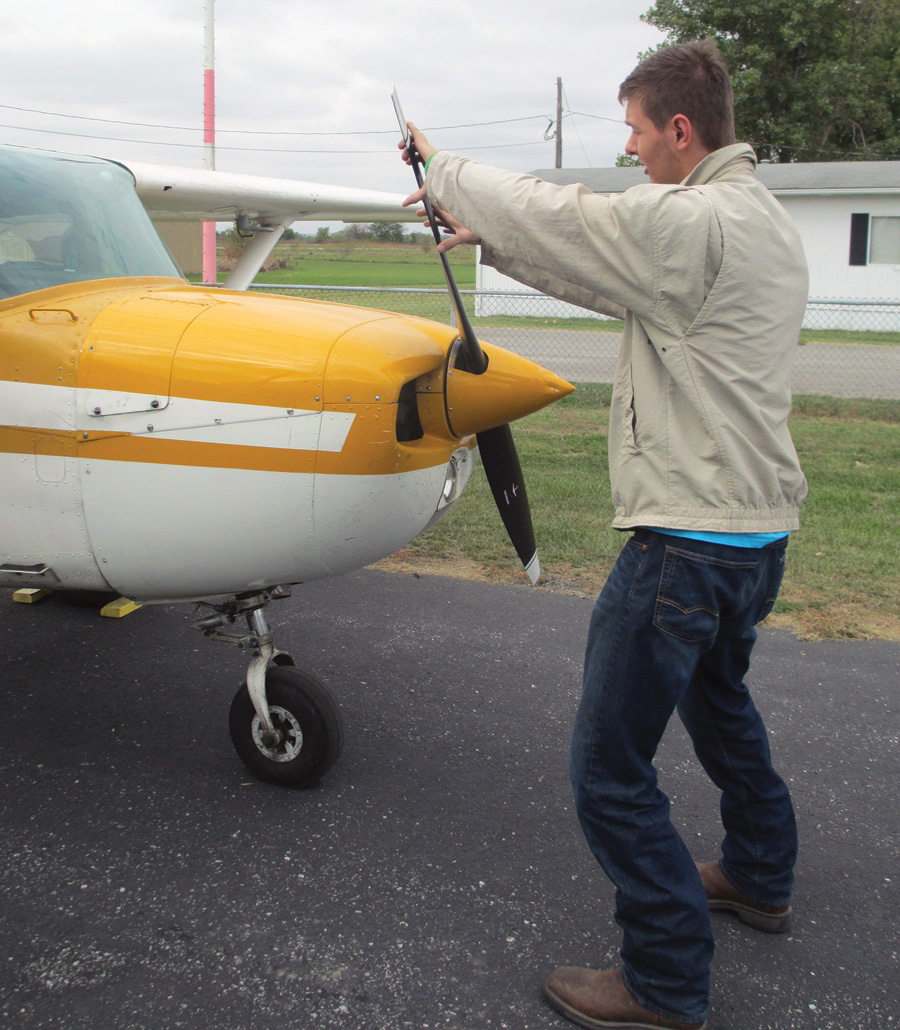 If You Really Have To

Like I said, never hand-prop alone. But, someday it may be absolutely forced upon you. If you really must do it solo, tie the ship down securely with three ropes, chock both maingear, tie the control wheel/stick back, and shut the gas off. Am I paranoid? Darn straight I am; this is dangerous as all get out. Leave the throttle at dead idle or nearly so. Prime and position the prop, then pull the key out of your pocket and insert it in the switch. Hopefully, you’ll get a nice gentle idle on the first swing.

Then, turn the fuel selector on and untie the ropes, staying well clear of the prop. Pull the final chock just as you’re stepping into the cockpit. And vow to never do that again by yourself.

Hand-propping small, low-compression, magneto-ignition engines is an easy, routine task, but it can’t be done casually and carelessly. Propeller injuries are messy, often resulting in disabilities or death. That big meat cleaver is always ready to chop up anyone in its way, so follow the right procedures every time you have to hand-start an airplane.

Barnaby Wainfan - March 17, 2009
0
Recently, there has been increasing interest in the efficiency of all vehicles, including airplanes. Designers are seeking to make airplanes that perform better and burn less fuel. Barnaby Wainfan takes a close look at the aerodynamics and mathematics behind this deceptively complex process.