Long-time Kitplanes® subscriber and former Taylorcraft owner Tom Hillard of Michigan suggested a column on drilling small holes, specifically safety wire holes in bolt and screw heads. Tom notes that although many Experimental aircraft are flying with metric engines (Rotax, VW, Subaru, for example), pre-drilled metric hardware are not commonly available. The only option is drill them yourself.

Safety wire holes can bisect the head or run to adjoining flats.

Tom also noted, “Pre-drilled bolts cost a lot more than undrilled. It’s not unusual for the cost of a drilled AN4 or AN5 bolt to be double or more. Drilling your own can save a lot of money.” He also mentioned that having the tools to drill your own bolts on an as-needed basis might get you out of a pinch someday.

After looking at the different drilling jigs featured in the Aircraft Spruce catalog, I purchased a safety wire drilling jig (P/N 12-16600). This product, branded Quantum, drills a bisecting hole through both hex bolts and socket head cap screws with shank diameters from 3/16 to 5/8 inch. If you prefer the safety wire holes across adjoining flats (see figure 1), then you need a different style guide. Also offered are drill guides for making holes in the threaded part of the bolt for either a cotter pin or safety wire.

A guide serves to locate the hole (either on center or across the flats) and to prevent the drill bit from deflecting. Drilling the holes can be tricky. Small bits are prone to deflecting with even the slightest force. If they deflect too much they’ll easily snap in two (ask me how I know!). You’ve probably heard the expression, “Let the drill do the work, don’t force it.” Well, that applies here in spades. Even with the drill guide to help prevent the bit from deflecting, you have to be careful.

The formula for estimating drill rpm is based on a recommended material removal rate called surface feet per minute (SFM). The formula is: spindle rpm = SFM x 12/πD, where D=drill bit diameter in inches. In the rpm chart we can work out that 3000 rpm for a 1/16-inch drill bit is more or less 50 SFM (2938 rpm to be exact). If we apply 50 SFM to a smaller drill size, say a #57 size drill (0.043 in.), the recommended speed is 4442 rpm. Note that most drilling calculators assume you are using a standard two-flute twist drill. Milling and lathe operations follow the same SFM removal rates, but the calculations also consider the tooling (single point tool, multi-flute, etc.). Use Google to find SFM guides online as well as drilling speed calculators. All you need to do is plug in the appropriate number for the material you are working with and the size bit you want to use, and they will kick out the rpm for drilling. 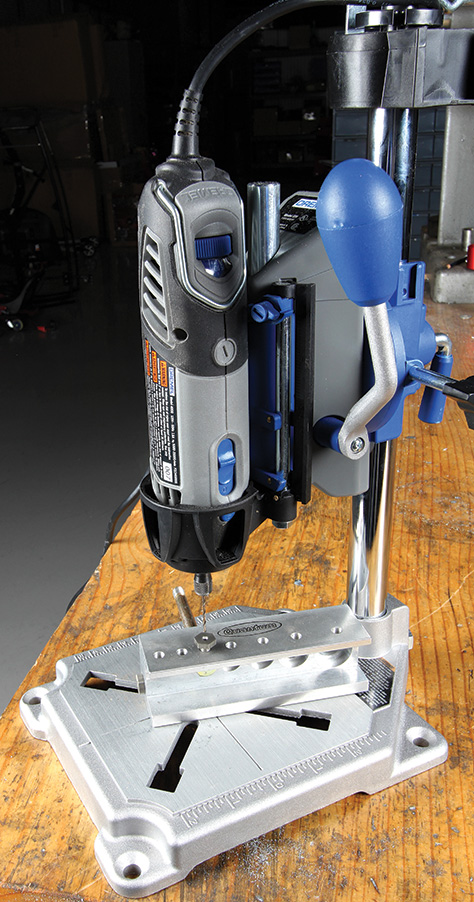 The Dremel tool mounts in the WorkStation accessory to create a micro drill press.

I tried drilling a bolt using my floor model drill press, but found the mass of the quill, the heavy return spring and the long lever arm damped out most of the feel of the bit in the material. I never considered trying to drill the safety wire holes with a hand drill. My cordless tops out at 1700 rpm which is too slow. A small drill press with a top spindle speed of 2500 to 3000 rpm would be good for most of the jigs on the market, but if your jig uses a bit smaller than 1/16 inch, faster rpm is needed.

I don’t own a small drill press, but I have a Dremel rotary tool. I found a $49 Dremel WorkStation accessory at Home Depot to convert it to a micro drill press. The Dremel option proved to be a good (and inexpensive) alternative. It has a very light spring with a short feed lever, which combines to provide tactile feedback of the drilling process. I set the speed control to the lowest setting, which is about 4000 rpm, and it worked fine. The Dremel bogged slightly when drilling, so the actually drilling rpm was slower. I used a technique called peck drilling, where you drill a little bit, retract the bit to clear the chips, and repeat until you break through. 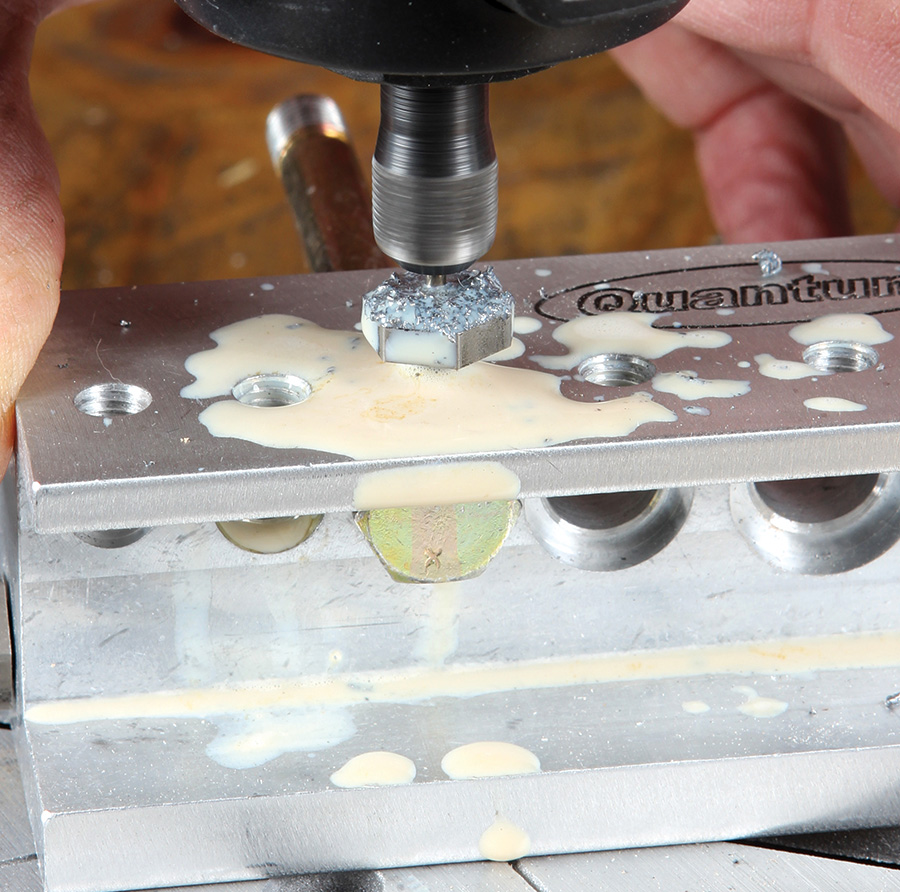 The guide bushing on the Quantum jig doubles as a clamp to lock the bolt into position for drilling. A daub of cutting oil helps keep the bit cool.

The Quantum jig came with two cobalt steel drills and guide bushings. They obviously have taken into account the possibility of breaking a bit or the bits wearing out. Drill bits, especially small ones, don’t last forever, so keep extras on hand. I talked to a machinist friend about how many AN5 (5/16-24) bolt heads I should be able to do before the drill gets dull or breaks, and he suggested it would be prudent to change bits after 20. Your results may vary. 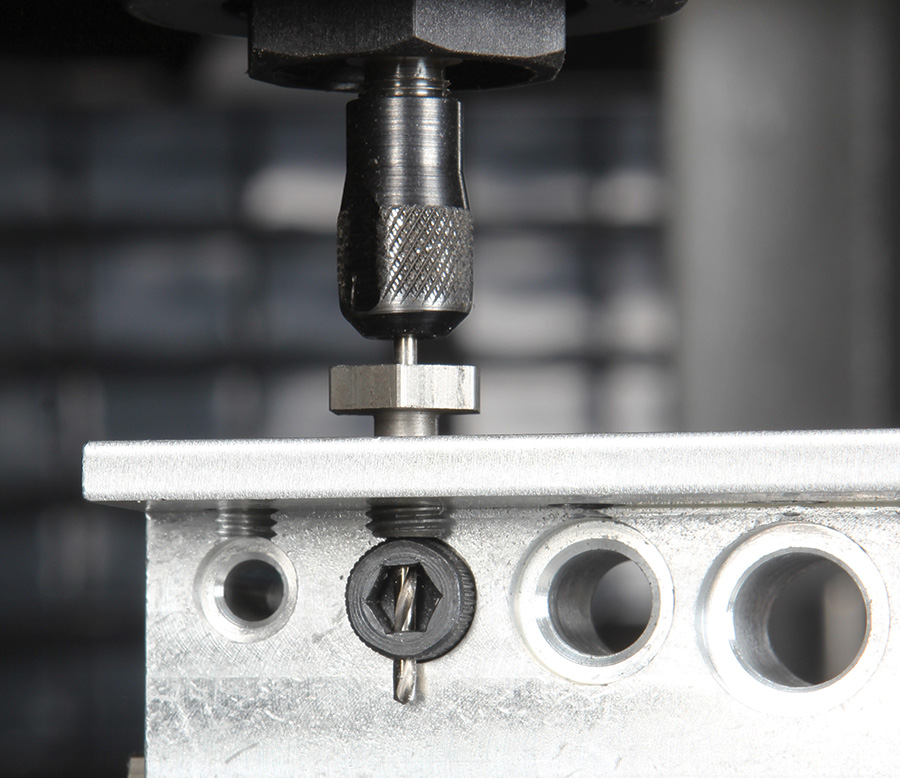 When drilling a SHCS, the jig automatically centers the hole in the screw head, but you have to watch the alignment of the internal hex.

Tools used for this project

Once your holes are all drilled, you need to deburr the flashing from the openings. Even though you may not be able to see it, that sharp edge could cut through your safety wire and render it useless.

Corrosion protection is the last step. The screw or bolt may be installed somewhere invisible to your pre-flight inspection, so it cannot be left to chance that you or someone else will remember to keep an eye on it. Either brush or spray a shot of zinc chromate primer or good epoxy paint into the hole. Make sure it permeates the full length. Wipe the excess paint from the head, let it dry and you’re good to go. 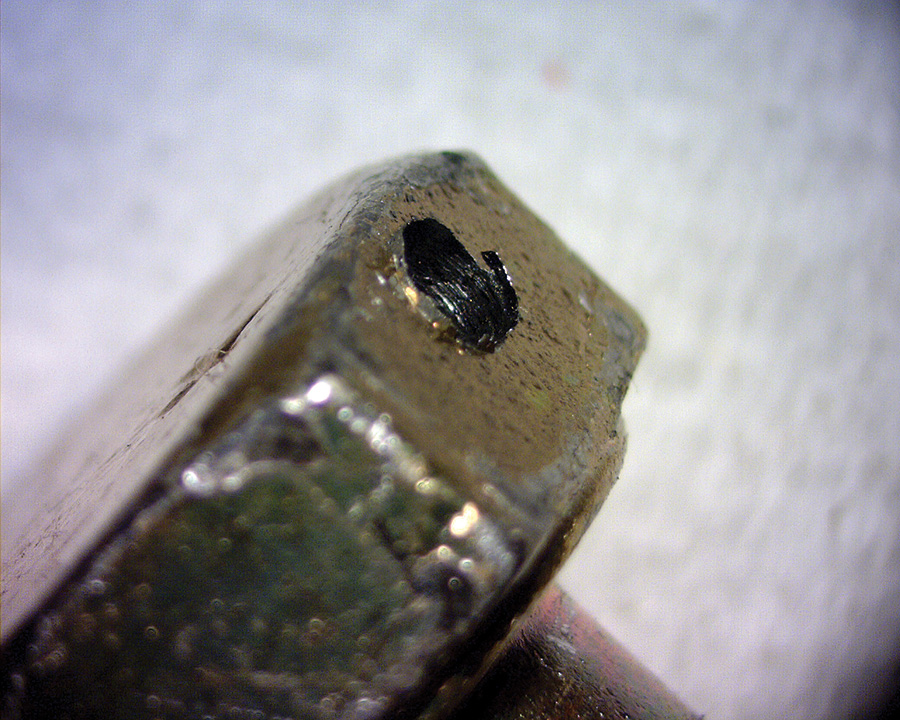 A close-up of the exit hole reveals a nasty burr. 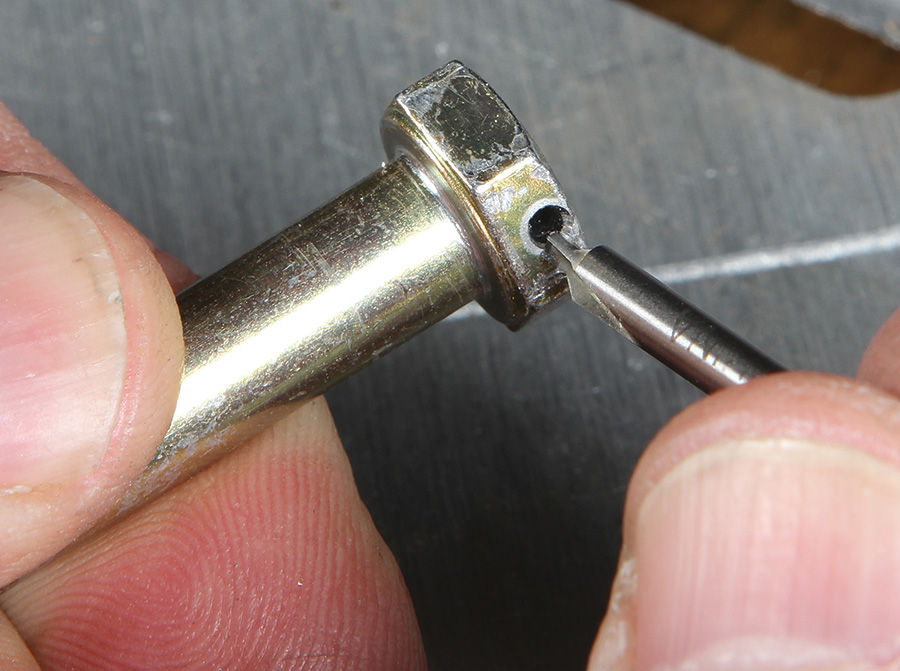 The burr is removed by hand with a small center drill or any suitable chamfering tool. 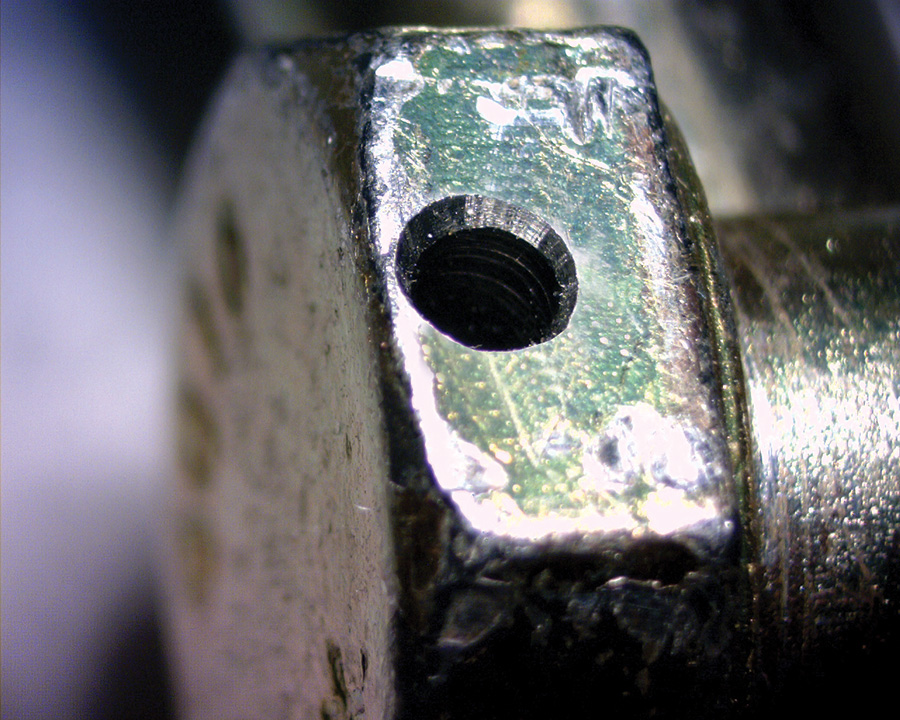 Deburring the edge will leave a clean chamfer that will assure the “safe” in safety wiring. 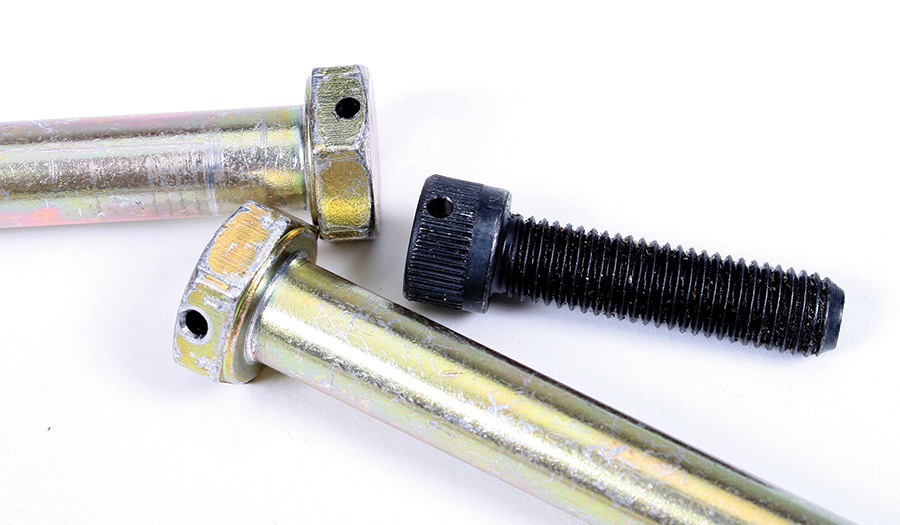