Vicki Cruse, former U.S. Aerobatic Champion and competitor in this year’s World Aerobatic Championships at the venerable Silverstone race track in England, was killed when her Zivko Edge 540 “nosedived” into the ground, according to witnesses. According to the International Aerobatic Club’s team manager Norm DeWitt “Cruse was flying the early round ‘Q’ program when she lost control of her Zivko Edge 540 aircraft by what appeared to be a mechanical problem in flight. She was at an altitude that prevented her from bailing out of the aircraft.”In addition to her success in aerobatic competition and Reno racing circles, Cruse was a contributor to this magazine and formed Berkut Engineering in the early 1990s to help resurrect the Berkut canard kit aircraft. 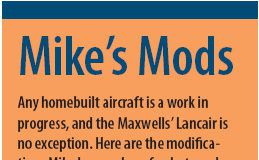 Mary Bernard - May 18, 2008
0
Few homebuilders forget the first airplane they constructed, even if they go on to do others. That was the case with Mike Maxwell, who had pretty much given up on ever seeing his Lancair 235 again. But life is nothing if not full of surprises, and Mike was in for a big one.