“Mohawk 2, tally-ho two Bones low on the road! Mohawk 2 engaged trailer!” I smiled under my oxygen mask as I heard my student pilot transmit a near-perfect engagement call over UHF on this, his F-4 Phantom initial qualification graduation ride. I can’t remember the lieutenant’s name (there were so many, you know) so, what the heck…we’ll just call him Hollywood. After six months of training, all Hollywood had to do was pass this ride, and he can go back home a full-up qualified Phantom pilot. To support the graduation exercise, Ellsworth Air Force Base provided B-1 Lancer bombers as attacking “bandits.”

With Hollywood’s tally-ho call, our flight leader acquired and engaged the lead bomber of a two-ship flying a five-mile lead/trail formation, flying very low and very fast over White Sands Missile Range. Attacking the trail “Bone” (our nickname for the B-1…B-ONE), we dove supersonic from 12,000 feet to close the gap for a simulated AIM-9M Sidewinder shot.

Instructors pay particularly close attention when their student pilots execute diving attacks into the low-level environment. First off, you’re pointed at the ground, which is approaching at Mach-number closure rates. Second, the student is distracted by that big juicy bomber target, so target fixation is a real hazard. Third, as the backseater, you still have a job to do: Acquire the target on radar and get a lock-on, bringing the Phantom’s weapon systems into the attack…while paying really close attention to not letting the lieutenant kill you both, right? When someone asks me to define multitasking, this is the example I offer.

Hollywood made me proud. Perfect transition out of the dive, perfect speed and closure control, valid (simulated) Sidewinder shots and kill call, maintained visual with our flight leader, and immediately regained his element formation position. Perfect—right up to the moment he tried to kill me! As we pulled away from the bombers, still at 300 feet agl and 600+ KIAS, I suddenly felt the control stick hit my inner right leg. The world turned upside as Hollywood belted out a piercing “Yee-haw!” I clawed at the stick, thundered, “I’ve got the jet!” through the intercom, recovered from the right aileron roll, and got us the heck away from the rocks…we bottomed out at just under 100 feet agl.

My hot-dog student had just executed a victory roll—at low altitude, with me in the back seat! He hadn’t planned it; he just gave in to the urge. That’s something we never do, even if it is a graduation ride!

Now, don’t call me a killjoy. After all, there are about a dozen different scriptures in the USAF flight reg bibles prohibiting what Hollywood had just done. But if you fly as long as I have, and serve an aviation safety career as comprehensive as mine, you remember the names and faces of the pilots who died either breaking each rule or writing new rules with their own blood (and their passengers). The same applies to kit aircraft pilots like you and me.

The first time I saw comedian Bill Engvall tell the story of his 2007 flight with the USAF Thunderbirds, I fell out of my chair laughing harder than I had ever laughed before. Find the video online…you’ll be glad you did.

In a nutshell, Bill got to fly with Thunderbird 7, making him officially cool for the first time in his life. The video reveals his repeated efforts to look and sound as cool as he thought the situation dictated, despite the physical torture he endured. Bill had hit upon a very basic psychological tenet in aviation: Flying is cool, so we want to look (and sound) the part. Roger. Roger?…rrrrRoger.

Bill’s right: Flying is cool, and we are cool because we fly. But like it or not, there’s a little bit of Thunderbird or Blue Angel in most all of us, no matter what we fly. That’s a problem: It can set us up for some real human factors bear traps. The hot-dog pilot warning light flashes wildly when a pilot thinks or mutters those immortal words: “Watch this.” It takes real discipline not to give in to the Ghost Rider impulse to buzz the tower. 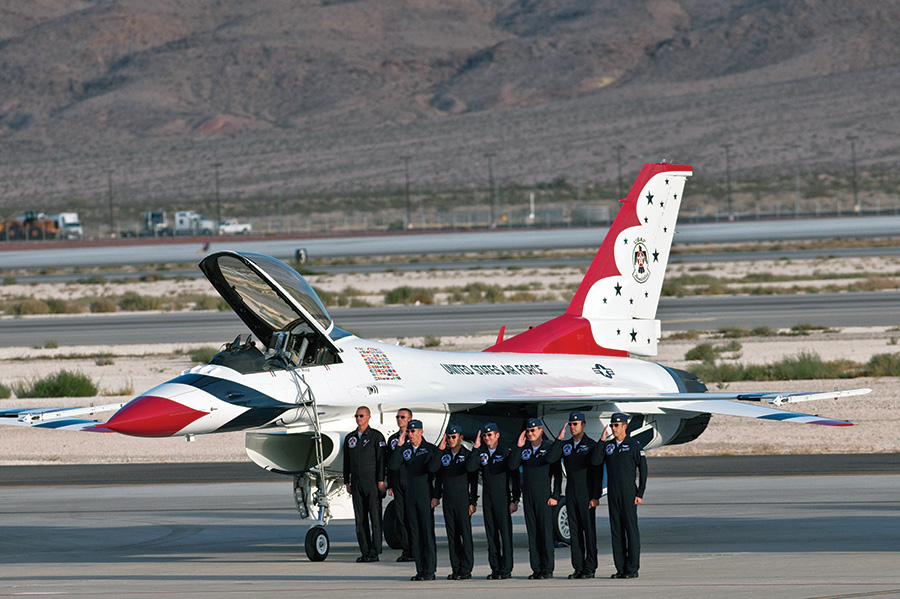 Neither you nor I are a Thunderbird (or a Blue Angel, for that matter). Deal with it.

The Science Behind Hot Doggin’

The Department of Defense Human Factors Analysis and Classification System (HFACS) lists several areas that investigators site when they uncover these sort of breaches in flight discipline. That’s right, I said “breaches,” as in an act of breaking or failing to observe a law, agreement, standard, or code of conduct. Pilots choose to hot dog.

In HFACS, overconfidence is a factor when the individual overvalues or overestimates personal capability, the capability of others, or the capability of the aircraft or equipment. Misplaced motivation is causal when an individual replaces the primary goal of a mission with a personal goal. We see excessive motivation to succeed when the pilot is preoccupied with success to the exclusion of other mission factors leading to an unsafe situation. Even a pilot’s personality style is a factor when the individual’s impulsive or invulnerable personality traits result in degraded performance, decision-making, or discipline.

Underneath all of these factors lies a flight discipline foundation. The HFACS category of Violation—Lack of Discipline becomes a factor when a pilot intentionally violates procedures or policies without cause or need. These flight discipline violations are vastly unusual. Thus, it’s safe to say that the huge majority of pilots just simply are not hot dogs—we don’t typically give in to these impulses. Still, some pilots find themselves irresistibly drawn to put on a show, especially if spectators are present. Spectators…an external stimulus that often triggers the internal breach in an otherwise disciplined pilot.

The Seductive Lure of an Audience

A hot dog pilot needs an audience, and he loves the big exit: It’s his last curtain call before departing the stage. In 2005, a Pitts Special builder/pilot launched into a VMC sky. Upon reaching 100 feet agl, the pilot doubled back into a 180-degree turn, setting up to perform a low pass over the airport. According to witnesses, while the pilot maneuvered not far above the airport surface, the Pitts developed a sink that resulted in the right wing and landing gear simultaneously impacting the ramp’s asphalt. The aircraft skidded several hundred feet before stopping. Thankfully, the solo pilot received only minor injuries. The NTSB found the pilot causal, citing his failure to maintain an adequate altitude from the airport surface when performing an intentional low-altitude flyby maneuver.

Some audiences don’t even know they’re in for a show. An A-10 Warthog pilot survived a low-altitude collision with power lines after he buzzed a boat on a lake. While flying a 300-foot-agl low-altitude training mission, he saw the boat and dropped down to 140 feet agl to buzz it. With power line impact damage to his left wing and right vertical stab and rudder, he successfully landed the aircraft from a straight-in recovery. Still no word on how well the boater fared after the surprise A-10 flyby.

Among the most well-known impromptu airshows by a pilot, the F-16 crash in Tulia, TX, is also among the most tragic. A USAF pilot flying cross-country through west Texas cancelled IFR, descended VFR, and buzzed his in-laws’ farm. He had called them before the flight and told him he’d fly by, so they moved outside to watch the show. On his second low-altitude pass, while attempting a low-altitude loop, he floated the back side while losing altitude, then accomplished a late recovery pull. His in-laws watched as he impacted the ground without ejecting. The USAF Accident Investigation Board cited the pilot’s breach in flight discipline in attempting to execute unauthorized aerobatic maneuvers. 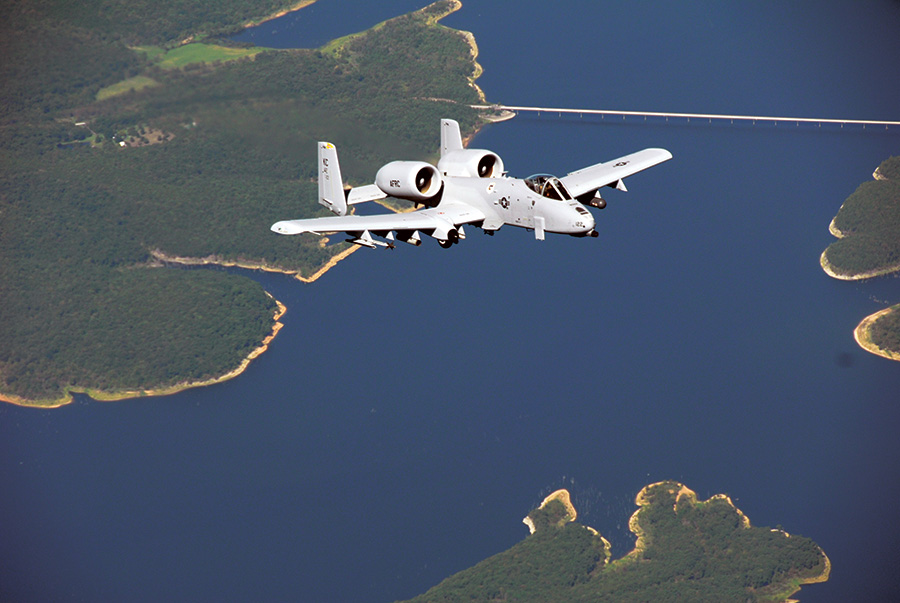 An A-10 Thunderbolt II flies over a lake during a refueling mission. A similar Warthog buzzed a boater in 2013, clipping a suspended power line and causing severe damage to the empennage and wing.

To paraphrase the old redneck jokes, if you find yourself: planning to fly in a manner that is risky or even illegal…and you admit to yourself, “I know this is probably risky or even illegal, but, what the heck”…or you just did it anyway without putting any thought into it. Yep, you’re probably a hot-dog pilot.

Once my young F-4 student pilot and I returned safely to base, I briefed the event to my squadron leadership. I told them that, despite his bonehead stunt, Hollywood had otherwise performed perfectly throughout the flight. I could bust him on the ride, but wouldn’t we build a more mature fighter pilot if we had the student debrief the victory roll event in front of his squadron peers? We could then pass him on the ride after publically taking a pound of flesh from this hot dog’s butt? Make it a lesson in aviation that he’ll never forget? They agreed.

More than any of the other squadron leaders’ stern and impassioned lectures that followed that day, our operations officer’s verbal chest-pokes fundamentally reshaped my concept of aviation maturity and professionalism. “Unbridled exuberance has no place anywhere in aviation.” I realized he was saying that this is how pilots die, as had some of his long-gone friends. I’ve never forgotten those words.

As I write this, I’m within about four months from submitting my RV-7A to Mel Asbury for his DAR airworthiness blessings. I yearn for the coming day when I can take Kelli Girl up and let her dance. But I’m on the lookout…

Watch for the hot dog. Put a collar on that dog and a leash on that collar.

Note: All references to actual crashes are based on official final publically released NTSB and Air Force Accident Investigation Board reports of the accidents, and are intended to draw applicable aviation safety lessons from details, analysis, and conclusions contained in those reports. It is not our intent to deliberate the causes, judge or reach any definitive conclusions about the ability or capacity of any person, living or dead, or any aircraft or accessory.

Safety Is No Accident: Glasair and GlaStar

Ed Wischmeyer - July 14, 2011
1
This Starduster Too is more than just a smart-looking biplane with unique elliptical wings and eye-catching paint. Careful reconstruction and modifications have made it into one sweet-handling ride. By Ed Wischmeyer.