A marvelous symphony of air, fuel, and electrons reaches a crescendo approximately 14° after top dead center (TDC) on the power stroke, the point of maximum cylinder pressure. It is that pressure, acting on the top of the piston, which drives the crank and ultimately the propeller.

As an aircraft owner, you have an interest in monitoring the sealing of each cylinder. The classic method is a differential pressure test, also known as a leakdown. It is generally performed at each required inspection interval and any time cylinder health is in question.

First, a few words about safety. A leakdown is simple to perform, but does require care. The test apparatus introduces compressed air into the cylinder, and if the crank is not at bottom dead center the prop can rotate. The applied pressure is far less than normal combustion pressure, but the prop can still obtain enough velocity to send you to the hospital. At best you’ll be the subject of an animated skit at the next meeting of the airport bums, so go slowly, think before you act, and always stay out of the prop arc! 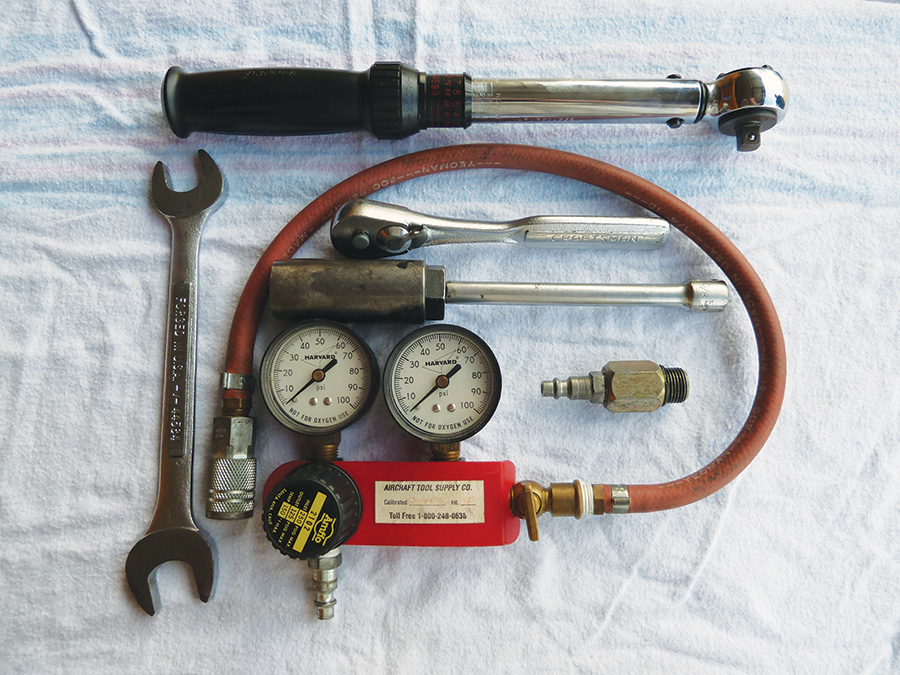 The following outlines a method that allows a mechanic to work alone. However, it is always a good idea to have a partner for leakdown work. One operator runs the gauge while the other guards the prop and holds it while parked at TDC, just to be sure.

Gather your tools (Fig. 1). You need an appropriate leakdown tester and an air compressor capable of maintaining 100 psi at moderate flow, plus the tools you normally use for removing and replacing spark plugs.

Warm the engine to operating temperature. While running, cycle the magneto switch to check for good grounds. After shutdown, ensure both magnetos are off and the mixture is pulled. Remove one spark plug from all cylinders (Fig. 2). Top or bottom doesn’t matter. Pick whichever is most accessible. 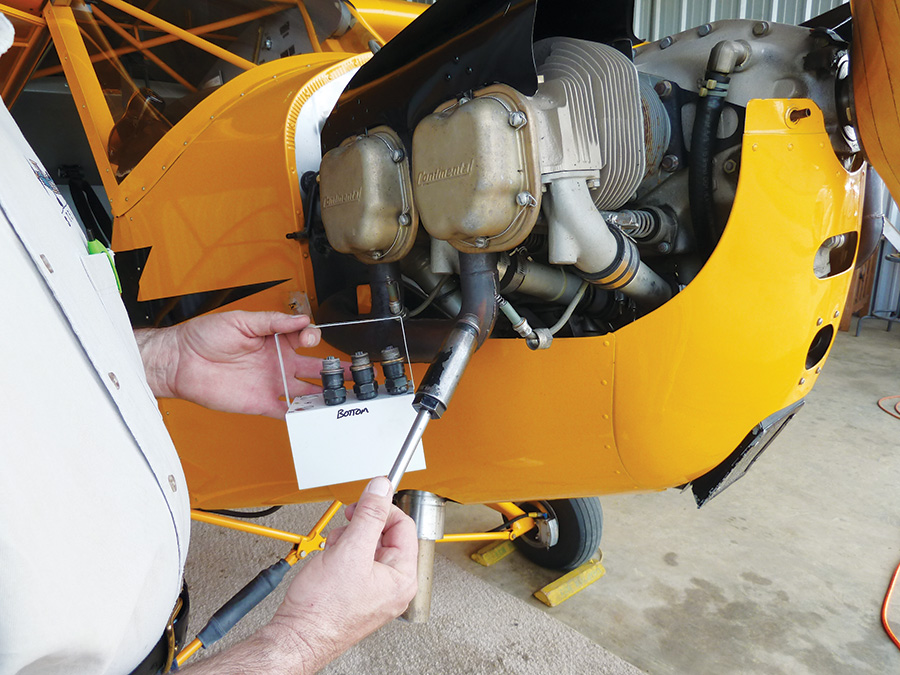 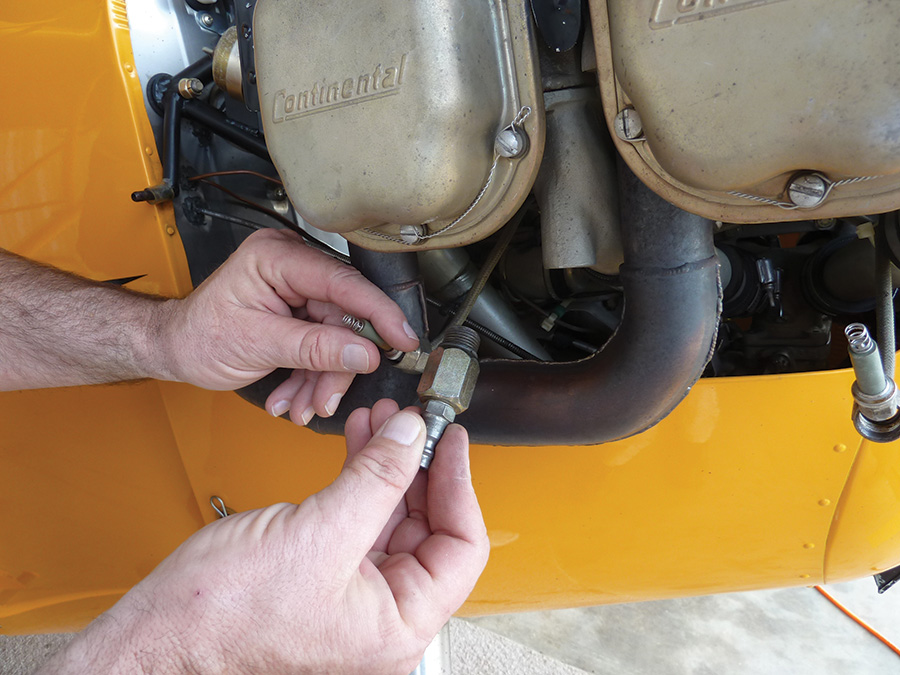 Screw the leakdown tester’s spark plug adapter into a cylinder (Fig. 3). It has an O-ring seal, so firmly hand tight is enough.

Locate top dead center. The easiest way to do so is by feel. Simply hold your fingertip on the open end of the adapter’s hose connector and rotate the prop in the normal direction (Fig. 4). As the piston rises on the compression stroke, you will feel a pressure rise at your fingertip. Likewise, as you go past the top, you’ll feel the pressure drop, or suction if you had released pressure at the top. Just a moment’s experimentation will determine the propeller’s angular position at TDC. Take note of it, because in the case of a conventional flat four you can expect the prop position to be the same for all cylinders. 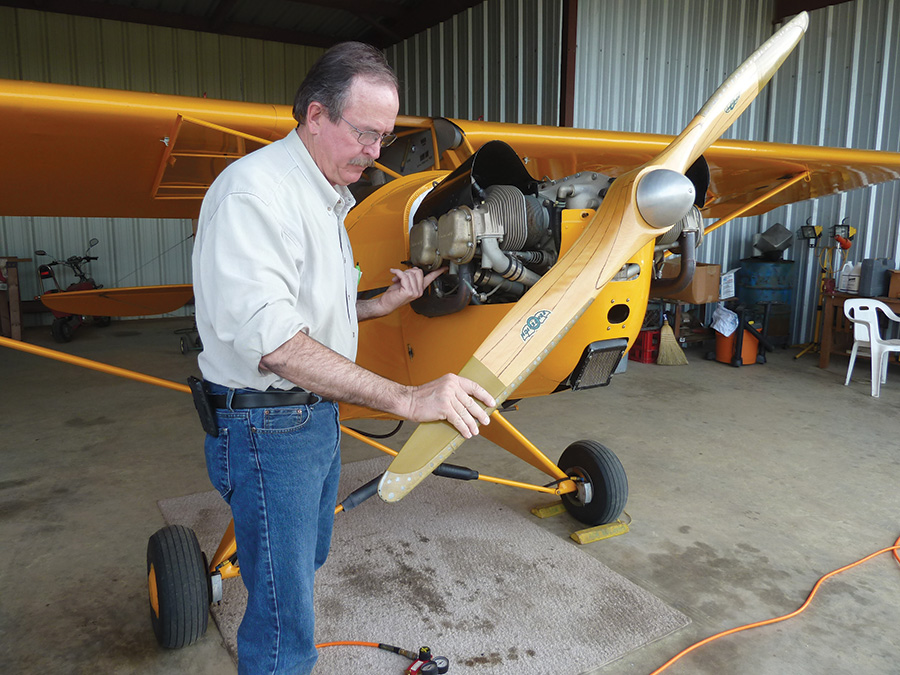 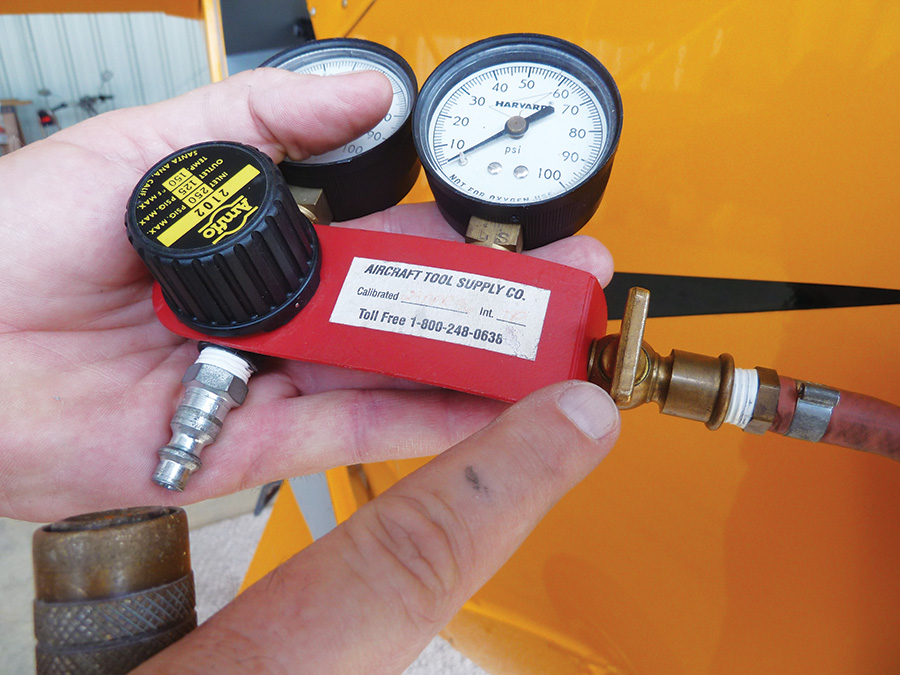 The classic leakdown tester (Fig. 5) has only two controls, a pressure regulator and a shutoff valve. The regulator (black knob on the left) works in the conventional fashion; twist it counterclockwise to reduce pressure and clockwise to increase. You read the regulated pressure on the left gauge, right above the knob.

Start by turning the pressure regulator knob several turns counterclockwise to reduce regulated pressure to some arbitrary very-low value. Connect the tester to the compressor line and then, with the cylinder valve closed, connect the tester to the spark plug adapter (Fig. 6). Ensure the prop is at or very near TDC. Clear the prop arc of friends and small animals, then slowly open the cylinder supply valve. Adjust regulated pressure to 25 psi. Now grasp the propeller firmly, rotate it backwards about one-quarter rotation, then forward to smoothly return to the TDC position. The piston rings are now seated in their lands as they would be during engine operation, ready for the pressure check. The low cylinder pressure will not generate much force at the prop, so it is easy to handle and less likely to injure anyone if you slip. 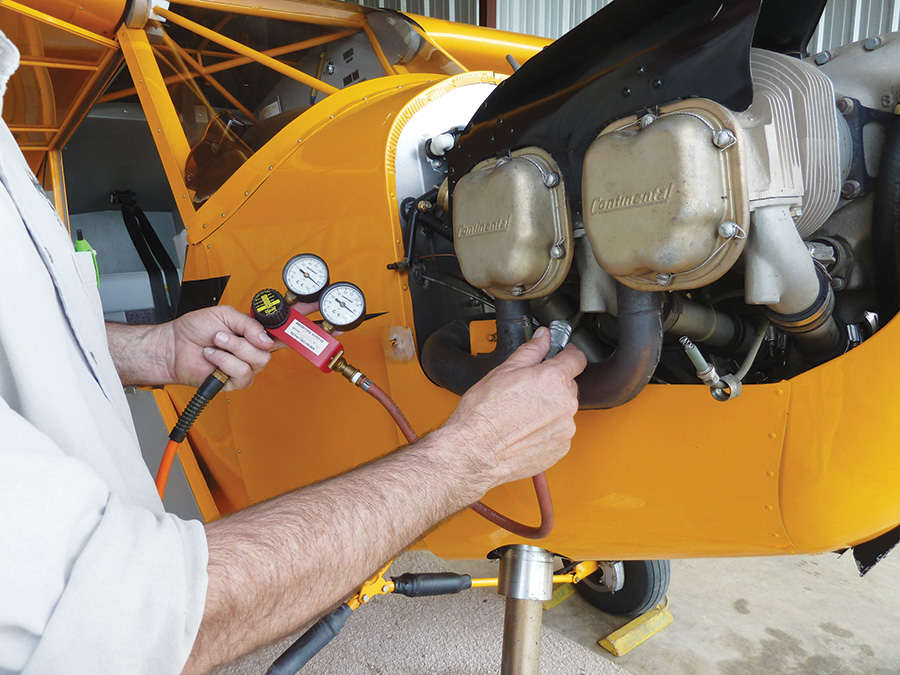 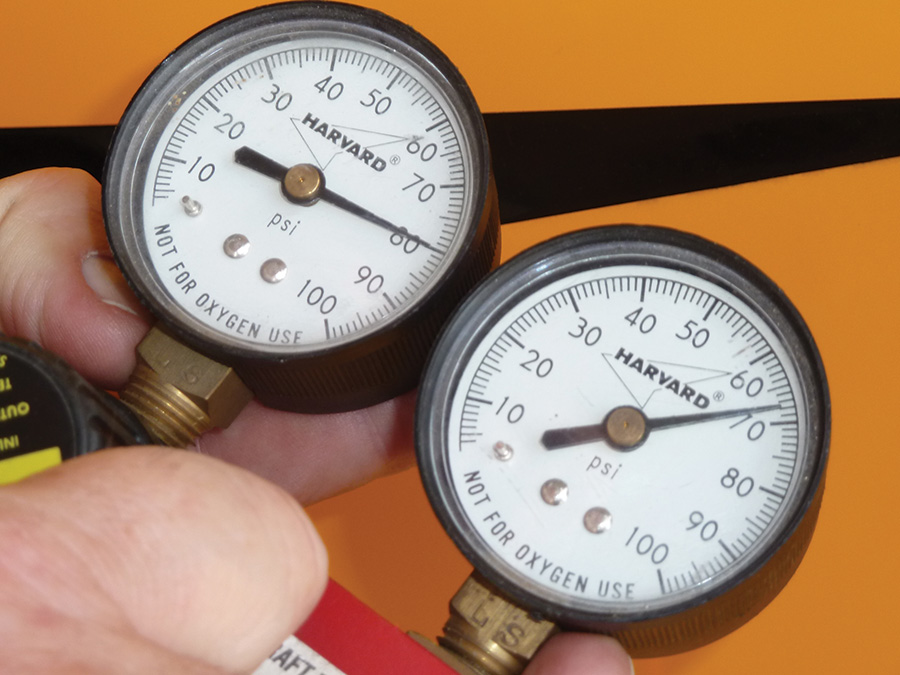 With the propeller carefully positioned at TDC, turn the regulator knob clockwise to increase regulated pressure to 80 psi, a standard value. Read cylinder pressure on the right gauge. You may need to tweak the regulator knob to maintain regulated pressure at 80 if your compressor tank is small. In the photo (Fig. 7), cylinder pressure is 68 psi. It would be recorded in the engine logbook as 68/80.

Before disconnecting anything, twist the regulator knob back down to 25 psi, a setup for the next cylinder. Turn off the supply valve, release the quick-connect, and move the spark plug adapter to another cylinder. If you wish, you can follow the firing order, but it doesn’t really matter. The fingertip method will find the compression stroke for the chosen cylinder, and you previously noted the propeller’s angular position at TDC.

With values recorded for all cylinders, it is time to consider airworthiness. An abridged guide would say ring leakage isn’t very important, but all other leakage is serious. Consult the manufacturer’s service instructions (see the sidebar) before interpreting leakdown values and/or attempting to correct a cylinder. Being wrong with no runway remaining can ruin your day.

The classic differential pressure tester incorporates a pressure regulator, a precision orifice, an on-off valve, and two identical gauges (Fig. 8). It is connected to the cylinder via an adapter and standard air line fitting (not shown). 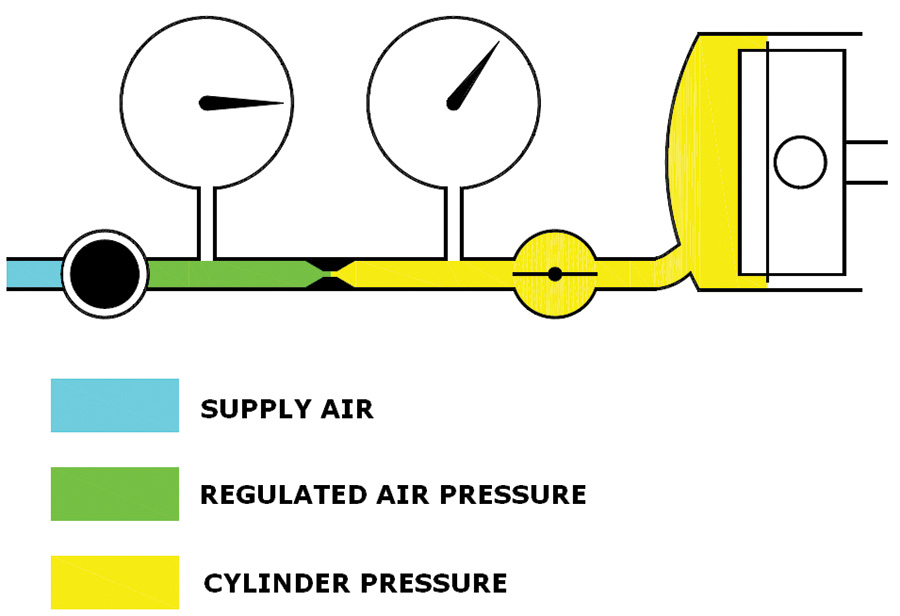 The gauge orifice for small engines has a specified diameter of 0.040 inches and an entrance angle between 59 and 60 degrees. You’ll find references requiring a 0.060-inch orifice for use with a bore diameter larger than 5 inches. However, a manufacturer’s service information takes priority over any advisory material. Lycoming SI 1191A and Continental SB 03-3 specify the 0.040 inch orifice for all engine models, including those with bores in excess of 5 inches.

The basic gauge set shown above is all you need for a Lycoming. Per SI 1191A, Lycoming cylinders should test within 5 psi of each other and 70/80 or higher, while readings below 65/80 or differences of 10 to 15 psi require regular re-test to determine wear rate and trend. Below 60/80, or more than a 15 psi spread, requires investigation and perhaps replacement.

Continental does not publish a minimum pressure. Instead, Continental SB03-3 requires a leakdown tester which incorporates an additional master orifice and control valve, or the use of an accessory master orifice. The orifice is used to establish a minimum acceptable pressure leakage limit, prior to doing the leakdown test. The leakage limit is a field-determined minimum pressure value, used in place of published minimum values. It is established by doing a leakdown through the calibrated master orifice, prior to connecting to the cylinder (Fig. 10). Mechanics report typical gauge values in the 40s. 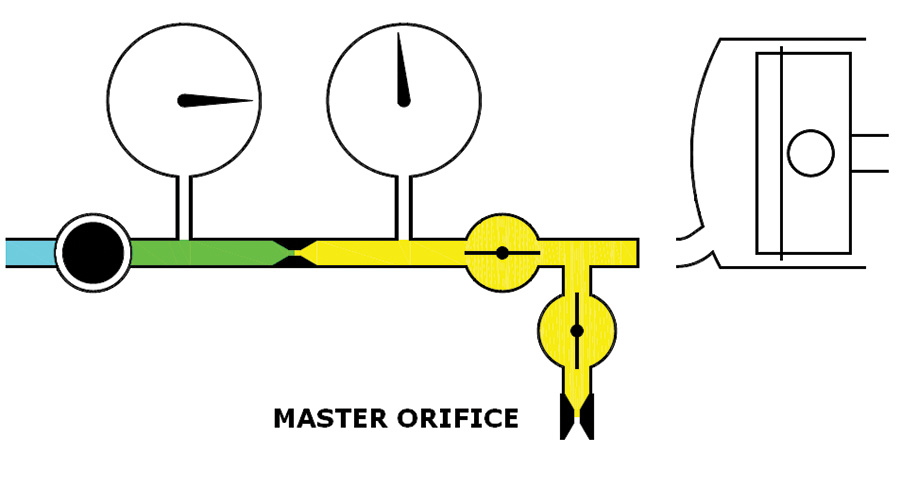 If the cylinder pressure is higher than the previously recorded master orifice pressure, Continental considers the cylinder leakdown rate to be acceptable (Fig. 11). However, mechanics should consult Table 1 in SB03-3 for complete airworthiness information. Continental requires that you consider the nature of the leakage in making a decision. 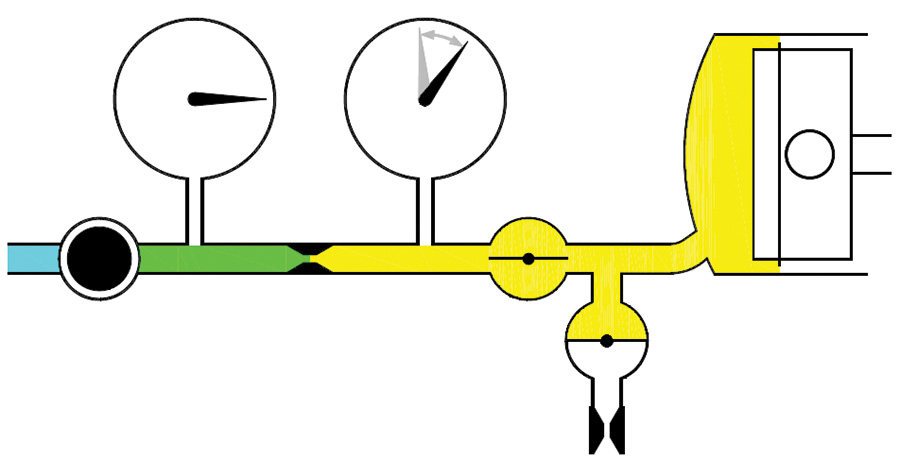 Sharp-eyed readers will note the use of a non-SB03-3 tool on a Continental O-200. Although unacceptable to Continental, it is quite common in the field. The classic tool and traditional guidelines work fine for an owner who wishes to monitor trends for a specific engine using the same tester each time—particularly if the test values are well above 60/80. Remember, minimum values determined with a master orifice are in the 40s. If a Continental cylinder trends toward marginal, or if legality or warranty enters the picture, obtain the specified tool and use it to establish minimum acceptable pressure. If shopping for a new tester, spend a few extra dollars and buy one with the additional master orifice, per the Continental SB. It’s the cool tool for Continentals, and you’ll use it just like the classic model when checking a Lycoming cylinder.

Dan Horton says he is “just a homebuilder”. He has been a pilot more than 30 years and currently flies a custom RV-8.