Traditionally we go places to see something, but recently I trekked in anticipation of seeing something disappear. That something was no less than the sun, not the usual destination for a fabric-covered biplane (unless you go at night), but by keeping approximately 93 million miles between our local star and my Starduster’s Dacron hide, any Icarus imitation was averted.

In many ways this trip was a perfect use of an airplane. Having an Experimental airplane made it even better thanks to the reduced cost and better performance. Most people made this trip via some sort of automobile, but the distance from home to eclipse viewing was definitely daunting by car, and if the pre-eclipse hyperventilating were anywhere near true, the ground-based experience promised to be a crawling ordeal centered on gridlocked surface streets and parking-lot freeways.

Another day in L.A., in other words.

Having logged plenty of those, we were keen to avoid any more, compelling mountain scenery or not. So we surveyed the hangar, and after dismissing the Cessna 140A as a bit leisurely and altitude challenged for 800 miles of inter-mountain valley crawls, we opted for something with a little more oomph, namely our 300+ hp Starduster Too. Not the last word in fuel economy or storage capacity, its loud lever summons the sort of activity that will hold your interest in aviation, especially when the mountain peaks keep coming in waves.

And there’s a point to be made about performance. We homebuilders often cite the lowered price of admission via building our own airplanes, and it’s true if you can chalk up the decade spent bringing forth a new airplane to some other column in your life’s ledger. But what we often forget to mention is most Experimentals are carved a little closer to the aerodynamic edge—or simply wear bigger engines—and thus offer useful real-world performance. So my son and I quickly opted for the biplane.

Luckily we already knew our destination: Rigby, Idaho. This was strictly fortuitous as a friend of an old friend had an even older farm in Rigby, and we were invited to join the encampment. That gave us invaluable ground support—a car, for starters—and our friends were fully equipped with tents, sleeping bags, and solar glasses, so we need not encumber ourselves with duffels up to the cockpit coaming, which I’ve seen done and have no interest in copying.

Furthermore, Idaho is not Oregon. There’s not a thing wrong with Oregon in this case, other than its proximity to California and a shared interest in Interstate 5, the bulging conduit by which the legions of the unwashed would spew into the Beaver State. Pre-eclipse talk spoke of road closings in Oregon, along with usurious $400 ramp fees until the airports closed due to no open ramp space—which came true in at least a few places, we are reliably informed. Conversely, a quick call to the Rigby Airport netted us a few pleasant minutes with a level-headed local who opined, “We’ll get about 12 airplanes. And if we get double that I won’t believe it.” Turns out he was exactly on the money, including our blue bolide. 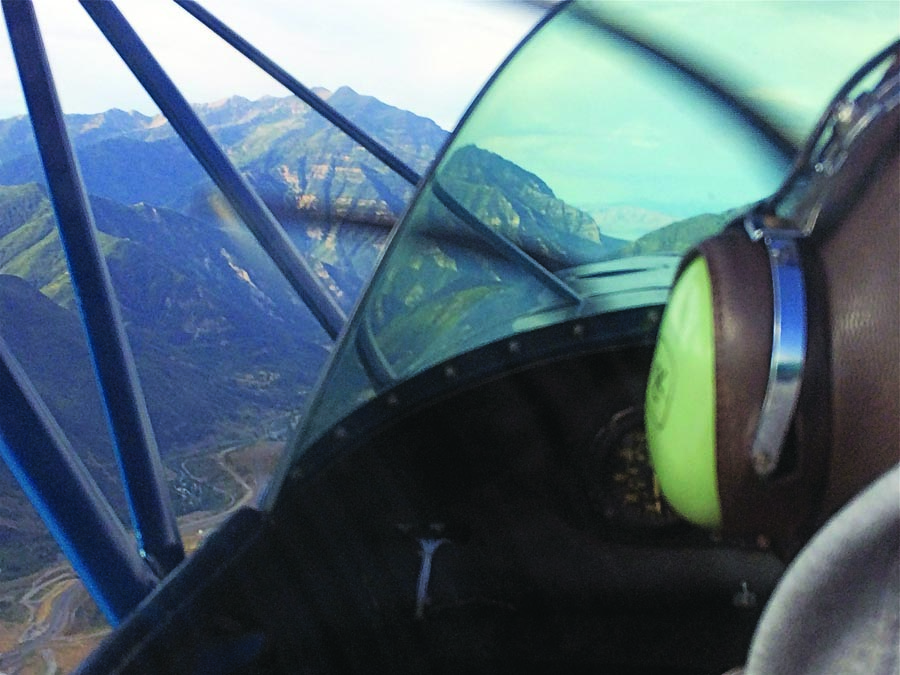 Power may corrupt, but it’s the stuff of life in the mountains. There’s a nifty pass through these hills around Salt Lake City; it’s right over the cowling’s nose in this view from the Starduster’s rear cockpit.

Having thus selected an airplane and knowing the destination, it remained only to get there. Starting in San Diego County, we skirted the busy Las Vegas airspace, fueled at St. George, Utah, then again at Spanish Fork, Utah. Then it was another easterly end run of Salt Lake City’s airspace—open cockpits and making radio speak mixing poorly. The rest was over hill and dale, before setting down at Rigby. There were no issues other than stiff legs with matching incipient pressure sores.

Aside from having seats apparently designed during the Inquisition, our Starduster proved the value of its all-around design. Larger and far more stable than the iconic Pitts tiddlywinks, yet smaller, faster, and more nimble than the revered Stearman and other pre-war round-motor rumblers, the Starduster’s claim is an ability to fly fun acro if desired, while at the same time functioning as a workable cross-country machine. With my newly minted private pilot son in the front cockpit doing the navigating—we flew the 1600-mile round trip using his cell phone as our primary “we are here” and TFR spotting box—and later much of the stick tending, I was relegated to human engine-management computer. That’s my usual cross-country pastime anyway, so, if anything, I had more time to scope the sights. Good stuff.

With its 540 Lycoming, three-blade metal constant-speed, natty blue interior upholstery (looks like a tired French brothel inside but smells more like old hydraulic fluid and hot oil), the ol’ Stardster is no lightweight. Loaded with fuel and humans, it was well north of 2000 pounds with a resulting firm wing loading that gives a nice ride. The big engine and prop make for serious nose weight to be countered by a shovel load of elevator incidence, too. Not the last word in drag reduction, this weight distribution positively nails the ‘duster down in pitch. It’s plenty responsive in that realm, but turbulence stands little chance of pushing the nose vertically, the result being riding the afternoon bumps is simply a series of wing rocks. The big tail group—an attraction across various disciplines I must admit—means little need to pay attention to yaw, either. It’s the next best thing to an autopilot.

In fact, compared to the perky RV-9A I was fortunate enough to copilot to AirVenture last summer, the Starduster is easier to hold on the iPhone’s magenta line. The new, straight, featherweight RV delivered its much-heralded thumb-and-forefinger stick force. That certainly puts some adventure in Saturday morning pancake runs but might be lighter than you may wish to tend 10 hours a day. It’s all personal preference, of course, but the experience did foster more appreciation for a little beef in the control efforts. That’s a good thing, too, considering the beastly biplane isn’t about to emulate an RV-9 anytime soon.

Oh, the eclipse. Worth the hype and sore rump both ways. Of all the things I’ve seen in the sky, a total solar eclipse is the most mind-shifting spectacle. Partial and annular eclipses aren’t the same; it has to be total. And flying there—Experimentally—is definitely the way to go.