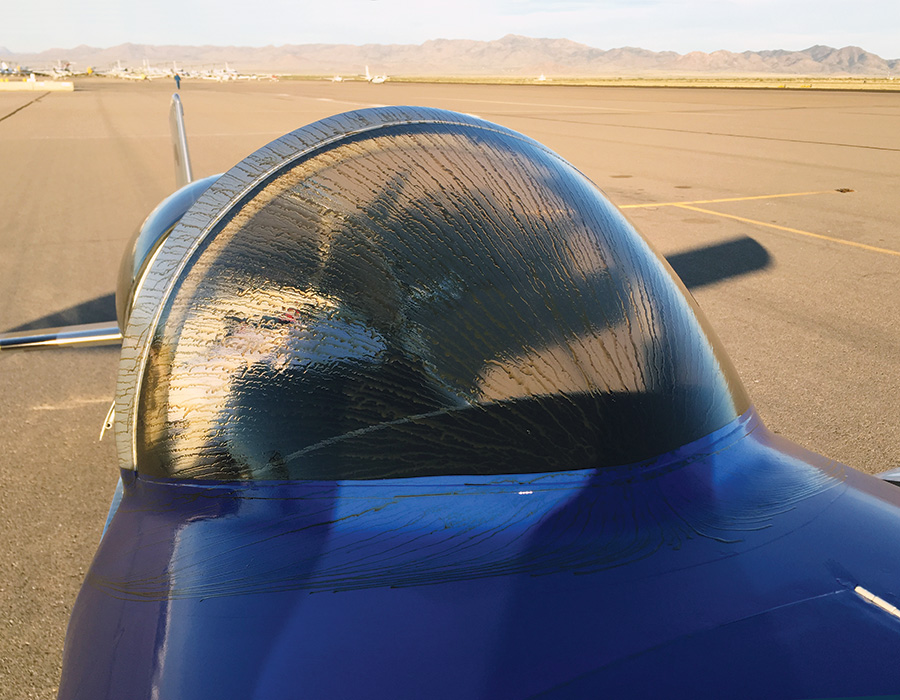 On the afternoon of Thursday, October 23, 2014, I was flying from Goodyear, Arizona to Boulder City, Nevada, in the Van’s RV-8 that I built and have been flying for two years. I fly this very scenic desert route once a week to get to work. Weather permitting, I try to choose a course that keeps me close to airports, favorable terrain, and roads. As it turned out on this day, my preference for flying near suitable landing sites as opposed to straight-line GPS navigation would pay off. While cruising at 6,500 feet msl in day VMC conditions, the crankshaft seal on my IO-375 engine blew out. The windscreen became completely covered in oil in about 10 seconds, and I was unable to see anything out front. Oil pressure remained in the green, but at the rate oil was coming out the front of the airplane, I knew it wouldn’t last long. 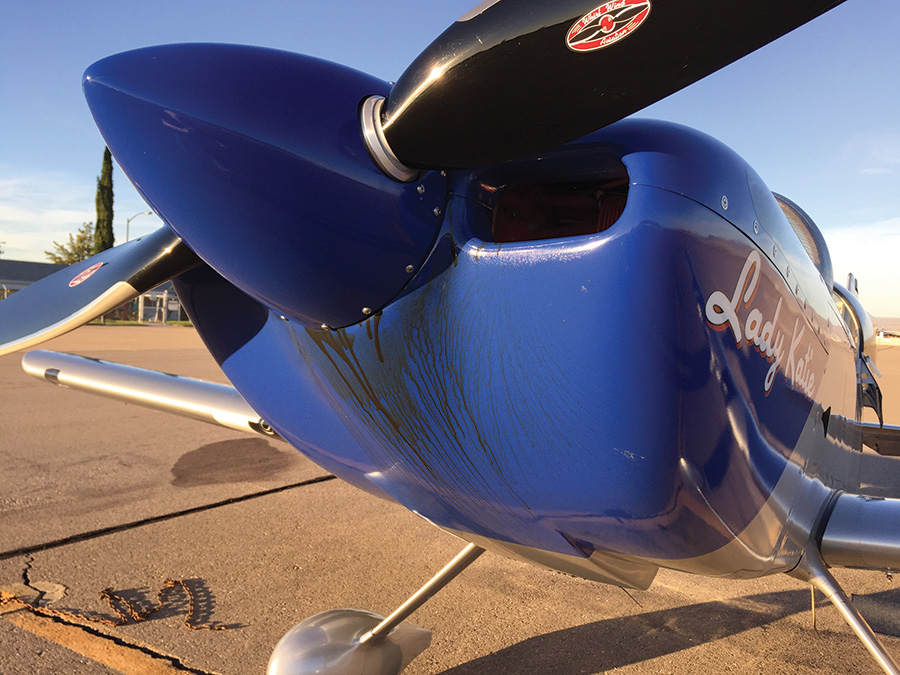 At the rate oil was coming out the front of the airplane, I knew it wouldn’t last long. Fortunately, I made it to Kingman, Arizona, before the oil was completely gone.

When this happened I was about 10 miles west of Kingman, Arizona. I made a right turn to east and put the Kingman Airport on my nose. At the same time, I selected “Nearest Airport” on my Dynon SkyView map display to give me a magenta line to reference since the only thing I could see from 10 to 2 o’clock was thick brown.

I got a Southwest Airlines crew overhead to relay my position and situation to Los Angeles Center in case I didn’t make it to the airport. Out in this part of Arizona, 6500 feet is sometimes too low to communicate directly with ATC, and sure enough, I could hear LA Center, but they couldn’t hear me.

I decided to land on Runway 21, mainly because of its 150-foot width, but also because it is the preferred calm wind runway at Kingman. The last thing I needed was to go beak-to-beak with an opposite-direction no-radio aircraft, especially when I couldn’t see anything out front.

I made a quick call on Kingman CTAF to see if there were any other planes in the air that I could do a formation landing with, but nobody else was around. For the first time in all my years of flying, I was seriously concerned about my chances of getting the airplane on the ground safely. Nothing focuses the attention and heightens the senses like oil gushing over the windscreen and not knowing when it will run out.

A few words should be mentioned here about maintaining aircraft control. I will not patronize the readers here with the oft-quoted platitudes on the subject. However, I will say that for the several seconds during which I had no plan for getting myself on the ground, it was comforting to know that I was at least pointed at the nearest airport, and I was at least flying the airplane. The rest of the particulars of how to land rubber side down eventually worked themselves out. 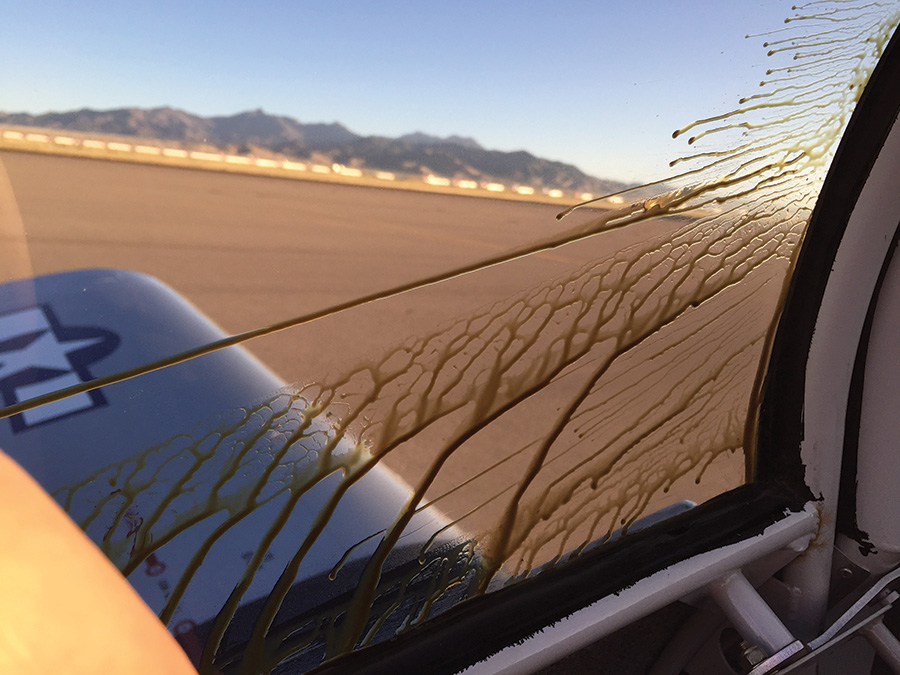 I couldn’t see anything out front, but at least I could see out the left side.

I flew slightly south of the airport and set up for a left downwind because my least obstructed view was out the left side of the canopy. After turning final, the runway depiction on my SkyView primary flight display really helped with flying blind. I put the flight path marker on the runway numbers and drove it in. Of course, the tricky part was the landing. Once over the runway, I descended very slowly and looked repeatedly over my left and right shoulders to make sure I was equidistant from the weeds. Touchdown was uneventful, and oil pressure remained in the green, so I exited the runway and shut down on the ramp.

This flight began with six quarts of oil, and a post-flight check showed three quarts remaining. Downloaded SkyView flight data showed the elapsed time from the first indication of a problem until landing was five minutes, 30 seconds. Therefore, I had been losing oil at about a half-quart a minute during the incident. When I landed, I had only about six minutes of oil remaining! If the crankshaft seal had failed somewhere else over the desert where airports are few and far between, I may not have made it to a runway or an unobstructed flat spot. That’s a sobering thought considering the rough terrain in this part of Arizona. 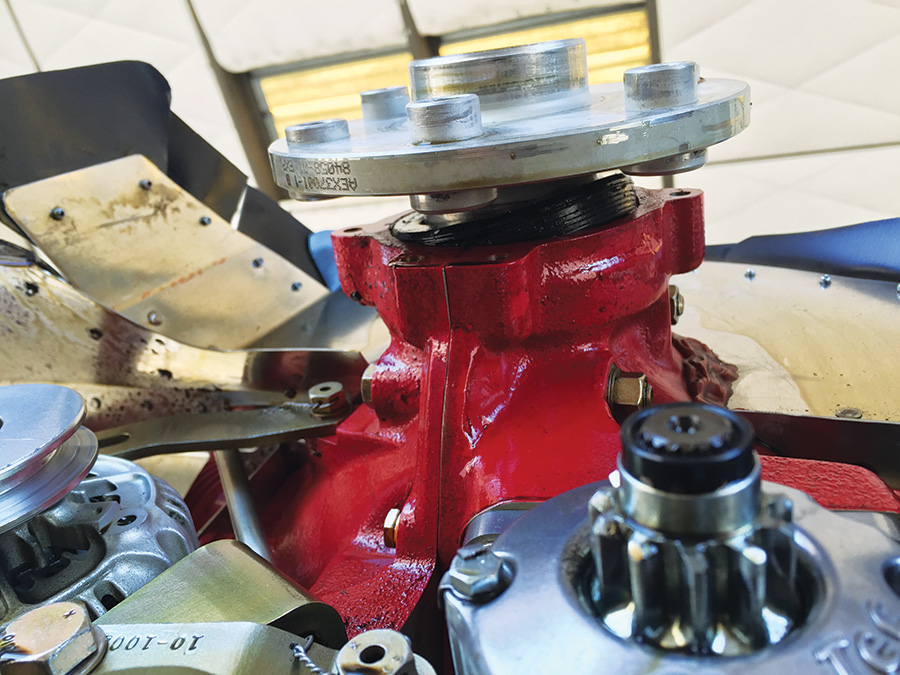 After we pulled the prop, we found the crankshaft seal halfway blown out.

The next day, a very capable mechanic at Kingman’s Air’Zona Aircraft Services replaced the crankshaft seal and helped to troubleshoot the cause. I have an oil separator that uses a crankcase vacuum check valve attached to one of the exhaust pipes. I am pleased with the oil separator, which has always worked exactly as advertised. However, the inside of the pipe stem connecting the check valve to the exhaust pipe had heavy carbon deposits restricting the opening to about 1/8-inch diameter, probably enough to cause crankcase overpressure. We found the culprit. 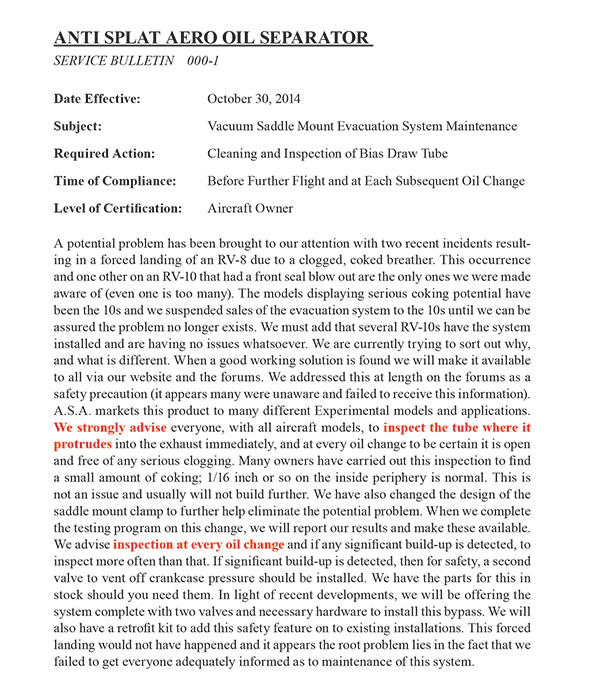 Since installation of the oil separator, the check valve stem had been used for two years and 265 flight hours and was never internally inspected or cleaned. There were no other blockages in the oil separator or hoses to and from the engine. When I called the manufacturer, I was told that they actually recommend regular cleaning of the valve stem at each oil change. What? How did I never hear about this? Apparently the manufacturer previously sent out a mailing with a warning to clean the valve stem regularly, but for reasons unknown, I never received it. The manufacturer also explained how a relief valve, identical to the check valve attached to the exhaust pipe, can be put on a tee connector in the hose between the oil separator and exhaust pipe. Again, I had no idea about this recommendation either.

There are a couple of important lessons from all of this. First, I accepted a degree of accountability when I attached an experimental oil separator to my Experimental aircraft. Along with this accountability comes the responsibility to find out everything I can about new or nonstandard equipment that I choose to install. Machines don’t care about operator ignorance. There is no slack for the pilot who “should have,” but didn’t. In hindsight I could have done a better job of researching my equipment; after all, who has ever heard of anything that attaches to an aircraft engine without some kind of recommended inspection or service interval? If you think there’s some information you’re supposed to have, start asking questions until you are satisfied. 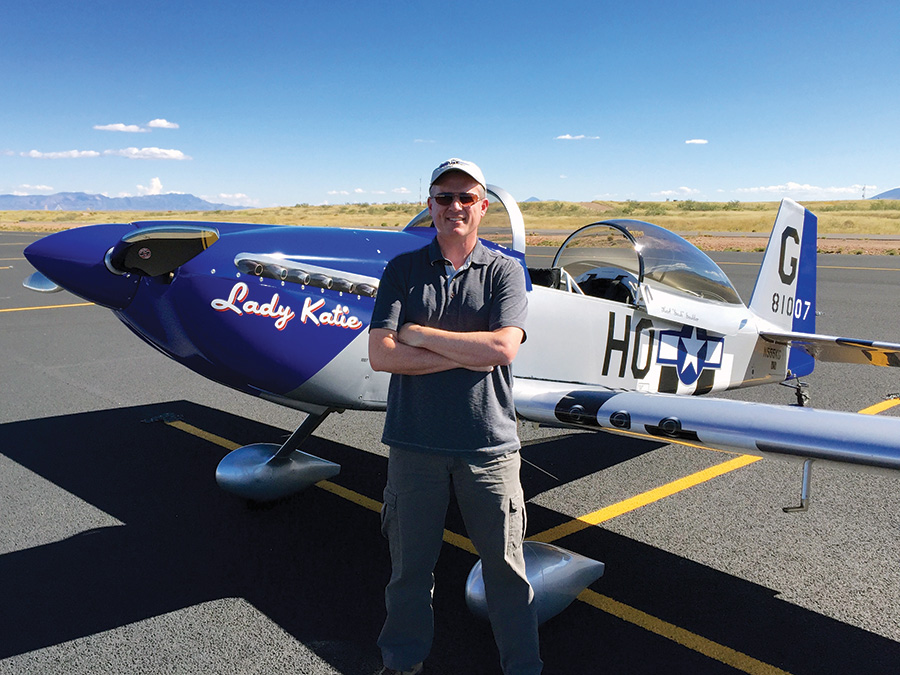 Lady Katie all cleaned up and ready to fly again.

Second, I hope that nobody simply blames the equipment or its source. That would be as unreasonable as failing to do oil changes and then blaming the manufacturer when your engine quits. A part of my oil separator system failed because I didn’t know it needed to be cleaned-it’s just that simple.

Some will say that I should just remove the oil separator completely, but I think I will choose to keep it installed. I acknowledge that a dirty belly won’t break an airplane, but a crankcase overpressure could. However, I believe the risk of a plugged check valve can be safely mitigated through careful regular service and the wise installation of a relief valve.

Vic Syracuse - September 18, 2022
0
Look closely and you will see that the bracket is cracked on the left...