Plansbuilders, the ultimate do-it-yourselfers. They’re undaunted when presented with a set of prints and little more than the unlimited potential of an idea. Perhaps they have more time than money, or maybe they simply enjoy the challenge of creating something from scratch. This is where the original homebuilt movement started, long before there were prebuilt composite or metal components, quickbuild kits and builder-assistance programs. Whatever the appeal for would-be scratch-builders, there should be more than enough here to be tempting, with some 138 designs total.

The solely plansbuilt designs are dwarfed by the number of kits available to homebuilders about three to one, which reflects the trend in this industry. More and more builders are inclined to have at least some of the work done for them, with more than enough left to do to satisfy the FAA’s 51% rule. Still, a certain segment will always want to build from plans.

Although there haven’t been tremendous changes to this year’s edition of the Plansbuilt Buyer’s Guide since the last time it appeared in this magazine, there have been some. Russell Alarie is now marketing the former Marv Reese Daisy Mae (find it under Alarie, Russell). Roger Mann/Ragwing Aircraft Designs has shortened its name to Roger Mann (you’ll find it in the M section: Mann, Roger). And WAR Aircraft Replicas has added two new models to its lineup, the F8F Bearcat and the Hurricane. The Tiziano Danieli Piuma Twin is now known as the Piuma Twin Evolution.

So there you have it. Our hats are off to the scratch-builders out there. 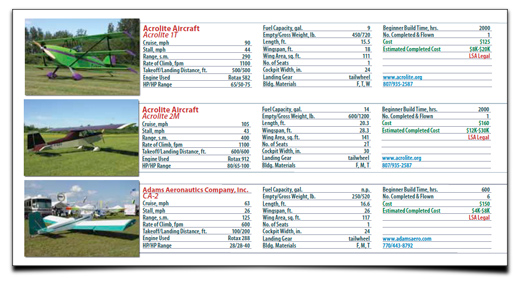