Human-powered aircraft represent a pinnacle that can be reached by a chosen few, somewhat like topping Everest or running a four-minute mile. For much of its history, mankind has pursued the idea of truly personal flight, starting with tower jumping and leading to Leonardo’s speculations and Lilienthal’s leaps. Often these were crippling, or even fatality-inducing, endeavors not likely to inspire imitators. Over the last hundred years, however, human-powered flight has become a more scientific and plausible reality. 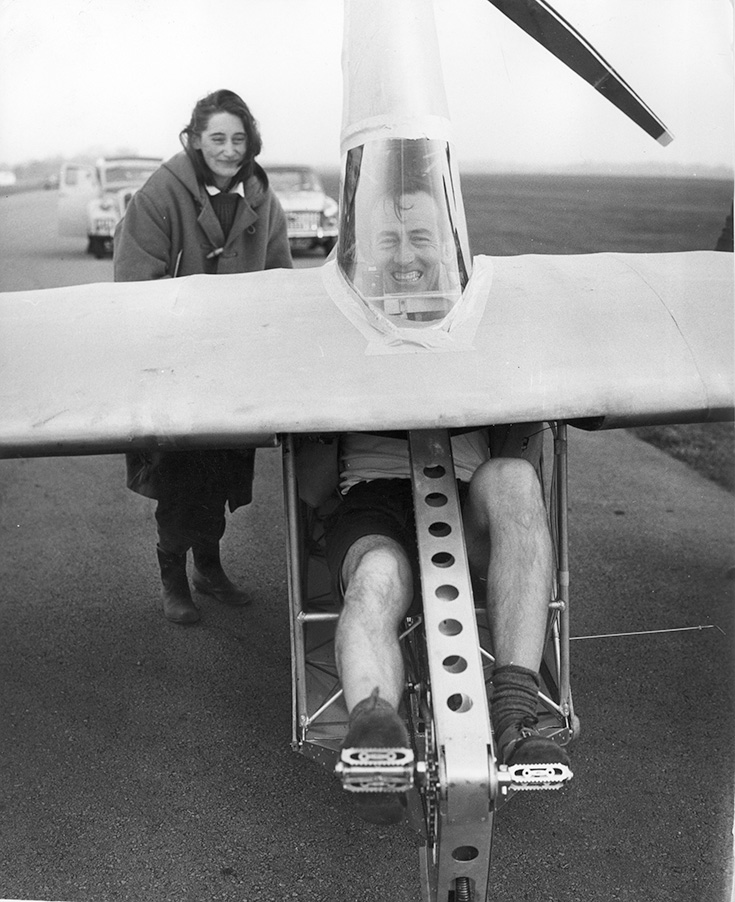 Anne Marsden looks on as Derek Piggott tries on SUMPAC. The next day, September 21, 1961, he would be the first person to take off unassisted and fly an HPA. Photo courtesy RAeS.

Postwar designers continued the sailplane configuration, made up of thousands of bits of spruce, balsa and lightweight covering. Construction took thousands of hours of dedicated effort, and even minor incidents that damaged these frail craft could ground the effort for good. In 1961, a trio of graduate students at Southampton University in England built SUMPAC (Southampton University Man Powered Aircraft), in which Derek Piggott managed the first unassisted takeoff and flight. It was to inspire dozens of follow-up attempts at human-powered flight.

Amazingly, builders were not put off by the long hours and uncertain outcomes of these endeavors, and aircraft flew in England, Japan, South Africa, France, Germany and America. Most adhered to the look of stick-and-paper models, substituting spruce and light fabric or Mylar coverings for the balsa and tissue of the small craft. Chris Roper, Secretary to the Royal Aeronautical Society’s Human-Powered Flight committee, designed and helped build one of the most successful of these: Jupiter, which managed repeated, extremely long flights. 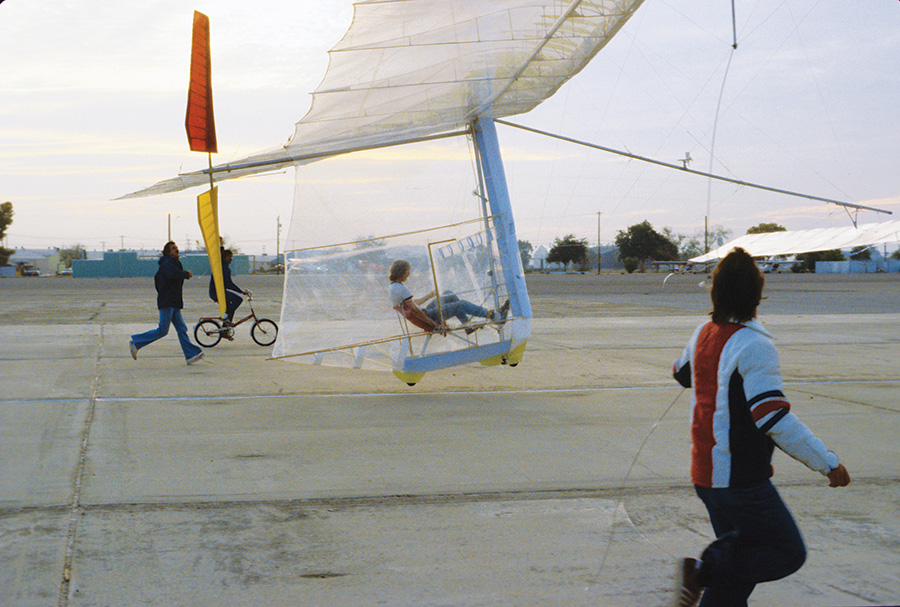 After winning the first Kremer Prize on August 23, 1977, Bryan Allen flies the final configuration of Gossamer Condor the next day. Copyright Don Monroe.

Paul MacCready, creator of the Gossamer Condor and Albatross, changed the style of building, reverting to his youthful modeling days in which he had won contests with indoor airplanes made of extremely-small wood strips and covered with microfilm—a liquid floated atop water that the modeler dipped a wing frame or propeller blade onto—peeling away a shimmering, dragonfly-like structure with a truly gossamer appearance.

That, and the flexible nature of the new hang glider Rogallo wings, gave at least partial inspiration to the first ungainly-looking efforts that MacCready and his family flew. Even his teenage sons were able to pedal and navigate these ethereal machines, and the fact that the craft could be made (and repaired) quickly added to their allure.

The Royal Aeronautical Society would like to see human-powered flight as a sporting competition, in which ordinary people in good health could fly airplanes that would sustain the many new pilots’ learning curves.

One example, now under construction in America, serves to highlight the creativity and drive of people drawn to this low-speed, low-Reynolds-number form of aviation. 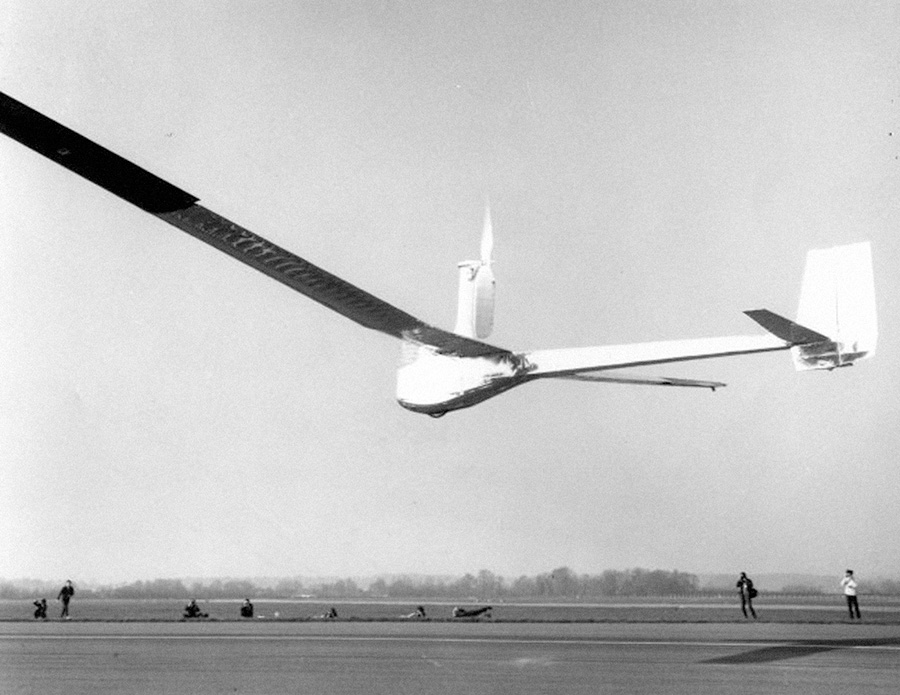 The aircraft that Neal Meyer and his son Ian have designed (and Ian will pedal) is known as the Carbon Condor. It has a 78-foot wingspan and will weigh in the neighborhood of 70 pounds. As the name implies, the structure will be built primarily out of carbon fiber, making it possible to achieve the low weight. 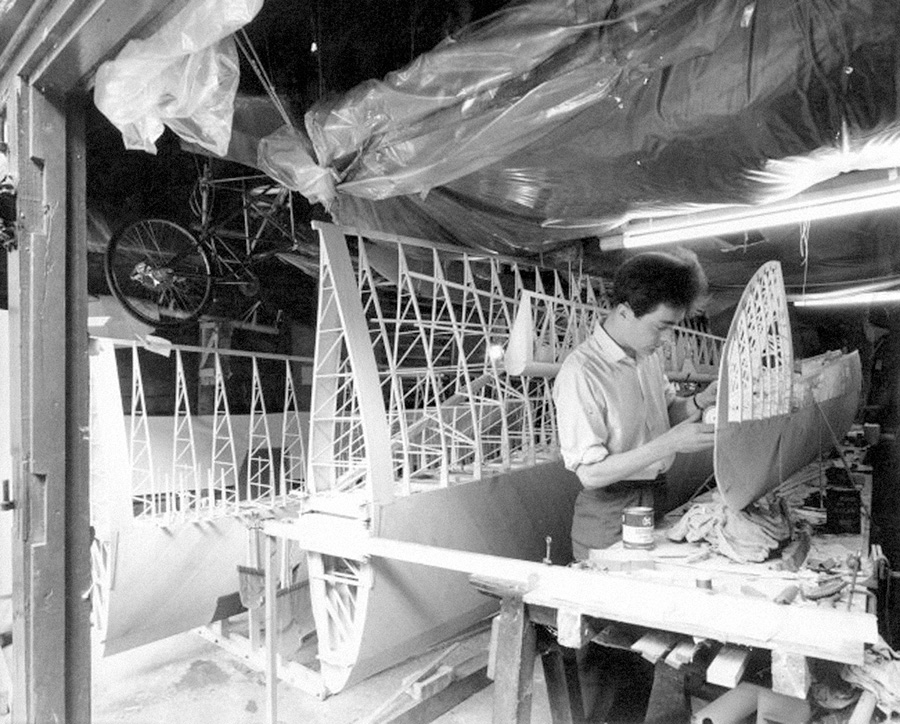 A propeller measuring approximately 6 feet 7 inches will push the aircraft through the air at airspeeds of 22–28mph (35–45 kph). The aircraft will be powered and flown by a 170-pound (77 kilogram) pilot who will be required to supply 0.40–0.46 horsepower (300-350 watts) while in cruising flight. The pilot will be pedaling from a recumbent position to minimize fuselage frontal area and reduce drag.

I visited Neal and his wife Linda in their Corvallis, Oregon home recently to view the project. The halls leading to Neal’s computer room are lined with large three-view drawings of past HPAs, evidence of the research he and Ian have done over the last four years.

Neal retired from his position as a materials scientist and engineer, specializing in the design and manufacture of thin-film hybrids, MEMs, and NEMs for Hewlett-Packard.

He started the project with no aeronautical knowledge, looking for a new discipline to learn and in which he could excel. The Kremer Prizes for a marathon distance (26.2 miles) flown in an hour or less, and a larger prize for sprinting around a shorter triangular course under a set time, are yet unclaimed. They total £150,000—about $223,500—a good post-retirement bonus.

With his son, Neal spent the first of four years so far on the project by studying the history of HPAs. The pair examined the various configurations for HPAs in their second year. He notes that he needed to know what had been done before to understand what had worked—and what hadn’t. Year three saw father and son homing in on their basic design, specifying components that would help them achieve their weight goals, and cutting their first materials. Neal explains that he revisits materials and components sites every six to 12 months to review updates, which are constant in these fields. He used several aerodynamic design software packages, including Mark Drela’s, a good choice since Drela designed the Icarus HPA that crossed 74 miles of the Mediterranean Sea. Structural design also used several packages, with PTC Creo for mechanical layout. 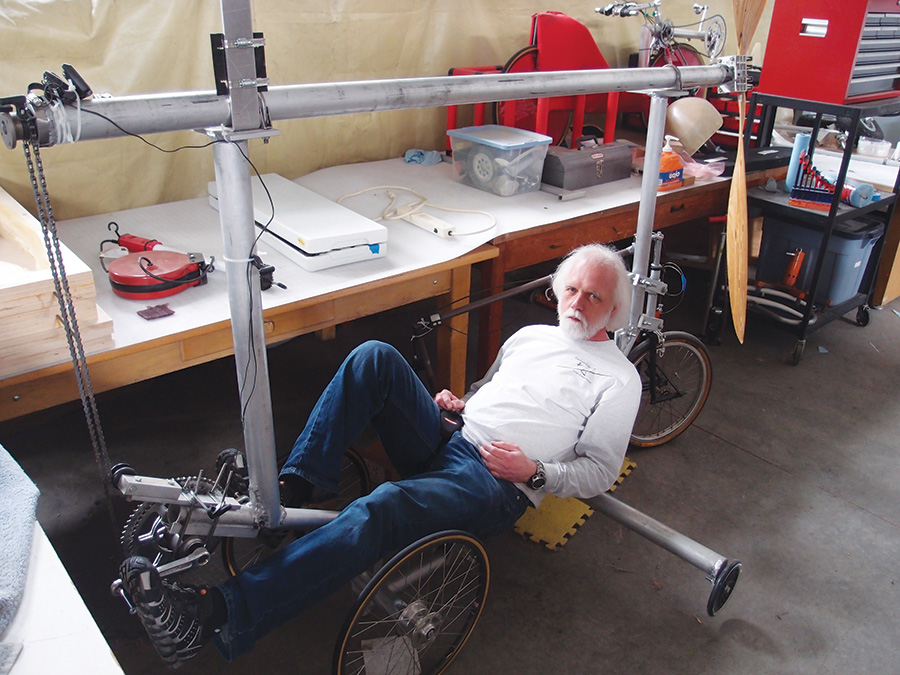 Neal Meyer reclines on Carbon Condor fuselage mockup. Its 70-pound weight equals the weight of the carbon version with wings and all.

They constructed an aluminum tube version of the power section of the craft’s fuselage, which illuminated issues with their initial design and allowed testing of the drive train and optimization of the seating configuration. Neal has an earlier recumbent bike of his own design, which gave him an understanding of the dynamics of twisted chains, as used in his HPA. Use of such a chain setup on his recumbent racer was copied widely by other racers. 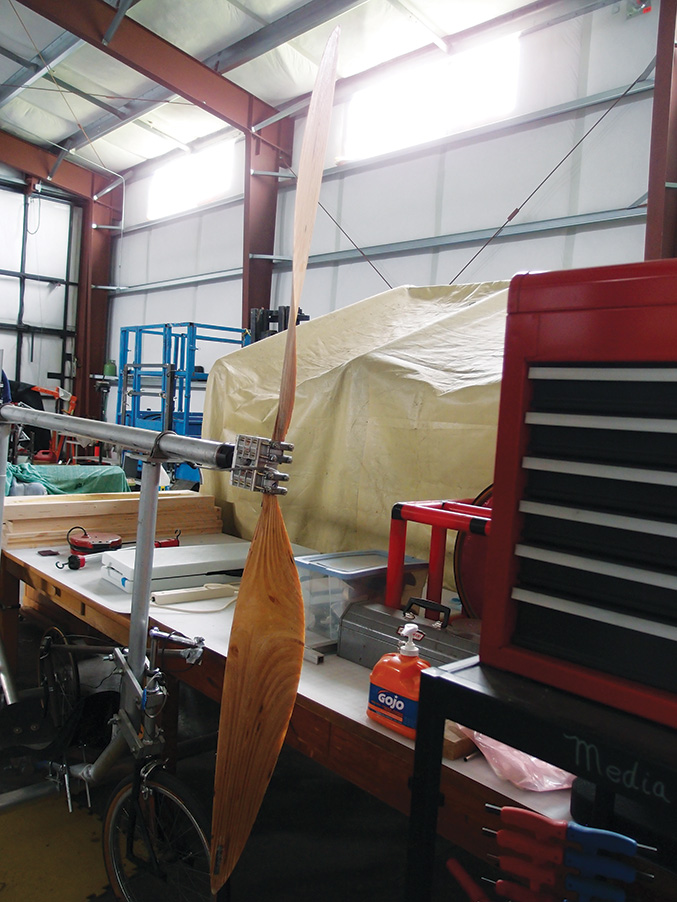 Propeller was CNC carved in MDF, then in birch laminate as shown here. Final version will be in carbon fiber.

The propeller itself is CNC-machined from laminated birch, with trailing edges so thin that light shines through them. The wood is laminated around a long carbon-fiber rod of small cross section, perhaps one-quarter inch in diameter. Neal points out that the rod maintains the structural integrity of the propeller. The final design will be all-carbon-fiber laminations. At the proper cranking speed, with the propeller turning about 300 rpm, it is almost silent. Asked why general aviation aircraft cannot achieve this near silence, Neal explained that his goal is to fly at a constant 27 miles per hour, just enough to win the marathon prize. The propeller is optimized for a narrow band between 25 and 27 mph, while a general aviation aircraft has to fly at varying speeds under differing demands on the propeller.

In his garage, a large board with aluminum perimeters defines the limits of the fuselage, made of large-diameter carbon-fiber tubes. Neal used a series of different diameter abrasive-tipped drills and hole saws to fashion end cuts on the structural tubes, with joined angles cut and fitted to internal doublers. Large bearings set in fittings that can be rotated on their slightly-off-center pivots will hold the tube on which the overhead portion of the powertrain transfers the drive to the propeller. The eccentric layout enables final tightening and aligning of the drive chain at a desired tension and position. 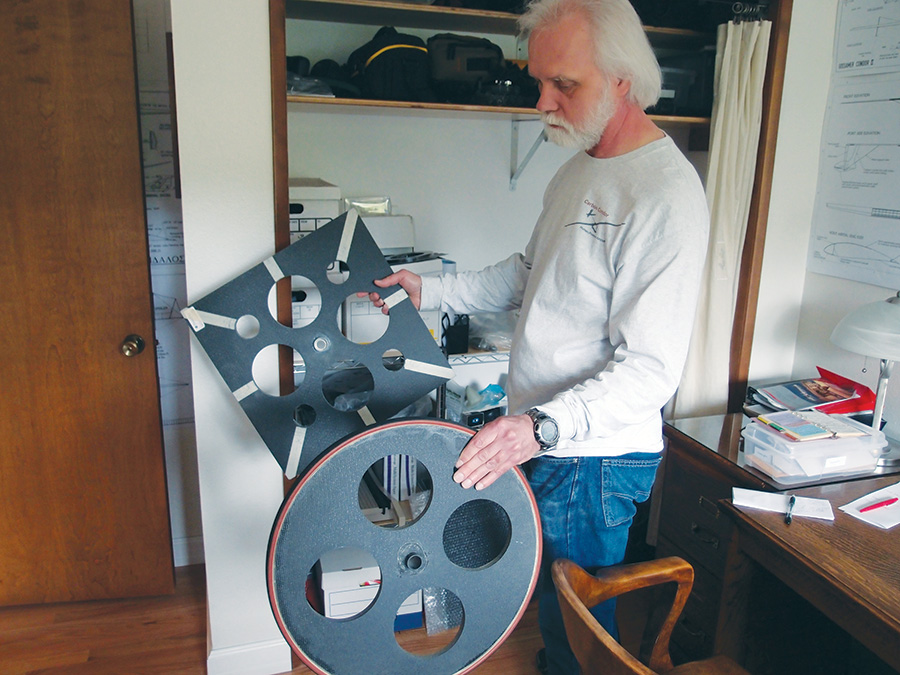 The chain is hollow-pin titanium with a Ti nitride ceramic finish, which requires no lubrication. It can twist to allow a significant change in direction necessary to transmit power from the pedals to the propeller drive.

Components for the aircraft are measured in grams. The well-named Aerolite titanium pedals, for instance, weigh a feathery 30 grams each—96 for the pair, complete with screws and cleats that grip the bottom of custom D2 cycling shoes, the lightest ever from the maker.

The tire on the landing gear weighs only 100 grams, but pumps up to an astonishing air pressure of 200 pounds per square inch. Mounted on a foam and carbon-fiber-faced wheel with significant lightening holes, the entire assembly adds one pound to the aircraft.

The Carbon Condor web site (with links to component suppliers)

The Human Powered Aircraft Group of the Royal Aeronautical Society

Neal shows an example of the molds developed to form the fuselage, wing and tail shapes. He and his son spent a week at Windward Performance in Bend, Oregon, learning mold making and pulling parts from highly-precise forms used by Greg Cole’s team to make DuckHawks and the pressurized Perlan II Sailplane. As they are not planning on production manufacturing, they go straight to a female mold and skip the male plug typically used. Some items, which require the ability to absorb shock and which are not primary structures, will use a synthetic cloth, since carbon fiber tends to shatter on impact, despite its great strength.

Skins will have two-ounce-per-square-meter carbon-fiber fabric faces, with two-ounce-per-cubic-foot Rohacell foam cores. Wingspars will use boron-fiber upper flanges, since that material offers superior compressive strength, and will rely on carbon-fiber lower flanges for that material’s excellent tensile strength. The team has carefully selected each element of their design to optimize weight and performance.

Flying will be the biggest challenge though, with either of the Kremer challenges requiring turns around fixed points. With a 78-foot wing at only 10 to 20 feet of altitude, the speed differential between inner and outer wingtips poses the danger of overbanking, and the potential for a disastrous encounter with the ground.

With Southampton University and teams in other countries working on the same challenges, Neal and Ian face a daunting task—and an indeterminate time—in which to achieve their goals. 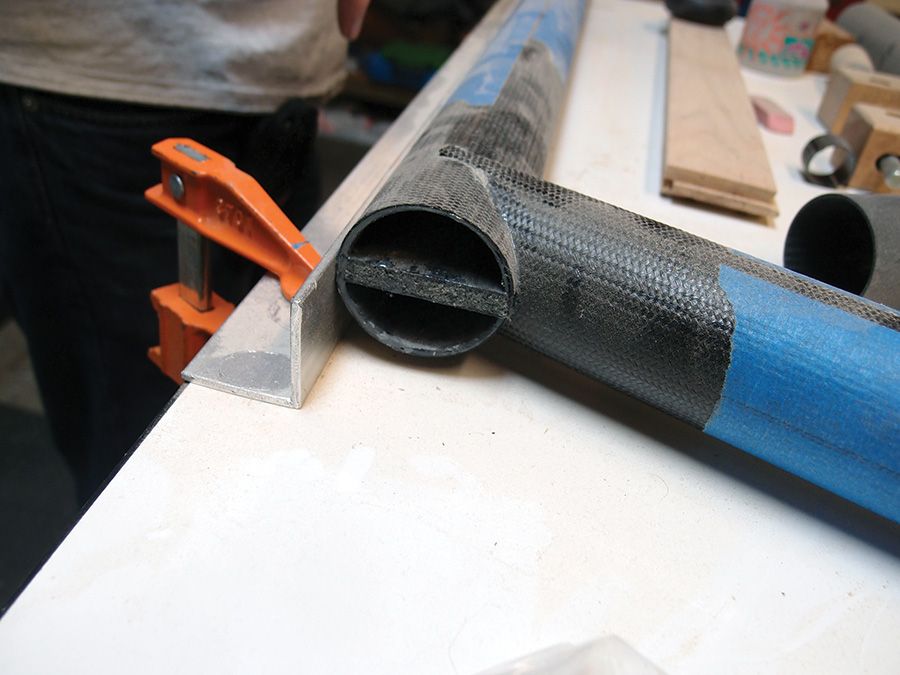 The Future of Human-Powered Flight

HPAs had a halcyon period in the 1970s, when the big-money Kremer Prizes were up for grabs. They are seeing a resurgence in recent years, with teams competing for the remaining Kremer Prizes and the Sikorsky Prize for a successful human-powered helicopter.

HPAs may also have a real future as sporting machines; imagine expanding the rules to allow electric assist, much like bicycles that allow extended commutes and easier hill climbing. HPAs could gain altitude and glide, reaching into areas of flight that aerodynamicists like Bruce Carmichael have envisioned. Properly stressed, they could be low- or medium-altitude camera platforms for advanced bird watching. Imagination would know no barriers with such new forms of flight.

Jim Weir - June 13, 2008
0
Using LEDs for lighting an aircraft has much to commend it. Low draw, reasonable cost, long life, good visibility. This month, Jim Weir takes us through the beginning steps of building these lighting systems yourself, using off-the-shelf parts and a little ingenuity.