The Experimental Aircraft Association’s AirVenture 2013 highlighted the new and novel, with exciting developments in the air and on the ground.

Electricity in the Air

Mark Bierele demonstrated his eGull 2000 equipped with a Zero Motorcycles 54-horsepower, dual-stator unit, identical to those powering three motorcycles up Pikes Peak a few months earlier. Flying in the ultralight area on Friday morning, he demonstrated takeoff runs under 100 feet, climbed steeply, and reached pattern altitude by the end of a short runway. Large flaps on the eGull allowed extremely short landings, with Bierele making turnarounds by mid field. 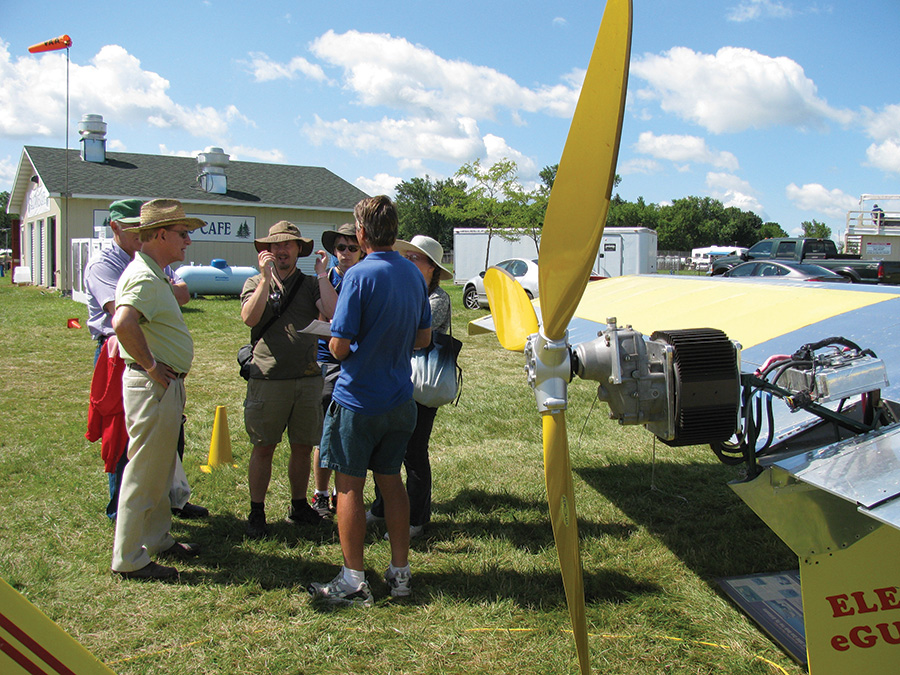 Bierele reports continuing to work with JoeBen Bevirt and his line of electric motors, so he might show up next year with a range of possibilities for powering his aircraft. Martin Koxxy, a Beaverton, Oregon homebuilder, is working on the wings for his eGull at this time and awaiting delivery of his Zero power package. We’ll be following up.

Yuneec International, now identified as Greenwing International, had two complete e-Spyders on display and in the air, with one sometimes in the Innovation Pavillion with a partially completed fuselage. Two flew together down the main runway on Thursday, August 1, the first electric formation flight at Oshkosh.

“Celebrity test pilot,” aviation writer James Lawrence, made his first electric aircraft flight Friday morning and demonstrated the e-Spyder’s excellent performance as he and Bierele took turns flying the pattern. Although the airplanes both meet ultralight weight requirements, the eGull’s 54 horsepower, compared to the e-Spyder’s 32, gave it a better climb. Both aircraft were far quieter than other ultralights, especially those with raucous two-stroke engines. Their quiet passage overhead was noteworthy for a lack of even propeller noise, showing good propulsion design. 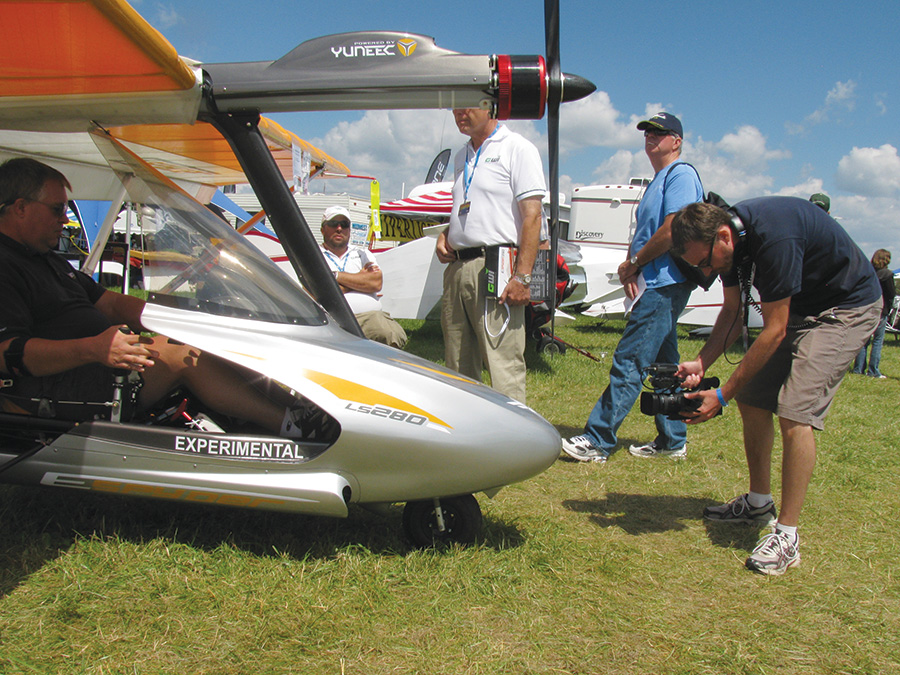 Greenwing’s e-Spyder was a popular draw. The aircraft meets ultralight weight requirements and is powered by a 32-hp motor.

Announcers lauded this quiet flight, and wished they had such an airplane. Perhaps many in the crowd felt the same way as they departed the show. Both Bierele and Greenwing are making their kit aircraft available at around the same $40,000 price range.

We missed seeing Randall Fishman with his ElectraFlyer ULS and Dale Kramer with his electric Lazair amphibian. Both have made contributions to progress in this new realm of powered flight. Maybe next year. 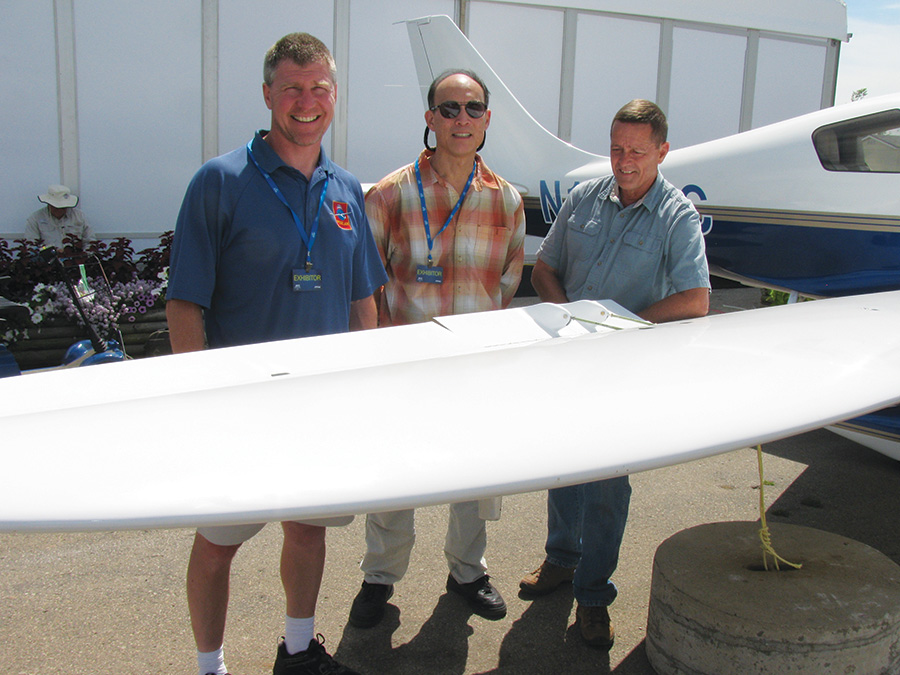 Beyond repeated demonstrations of practical reality in the ultralight area, seekers could find a promising future in the Innovation Pavilion, a showcase of emerging technology, some of which is now available, unlike many “breakthroughs” perpetually five to 10 years away from commercial reality.

Dr. Brien Seeley, president of the CAFE Foundation, gave two talks Friday morning: one in the Innovation Pavilion and a second in the Rotax Pavilion a good walk away. Between the two he examined the problems faced by general aviation today, and gave some surprising answers.

Personal airplanes are expensive, with fuel, operation, hangar, insurance, and maintenance costs requiring a highly motivated owner. Airline travel wastes time with the lost productivity and annoyance of waiting in long TSA lines and being subjected to invasions of one’s privacy. 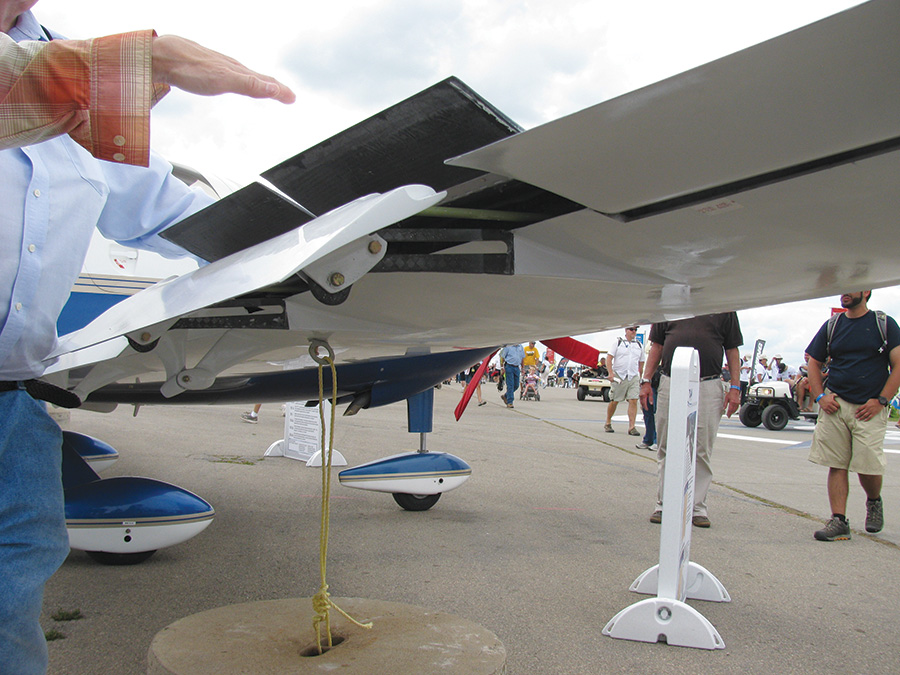 Complex linkages of the Lam Aileron™ are apparent in this view.

Seeley’s solution, developed in concert with NASA’s Mark Moore, would provide safe, on-demand transportation within walking distance of your home, with door-to-door times beating those of automobiles, airlines, and even personal jets, while being quiet, affordable, and sustainable. Pocket airports no bigger than football stadiums, spread throughout urban and suburban neighborhoods, would host fleets of “Sky Taxis,” efficient two-seat electric aircraft that would fly their passengers autonomously. 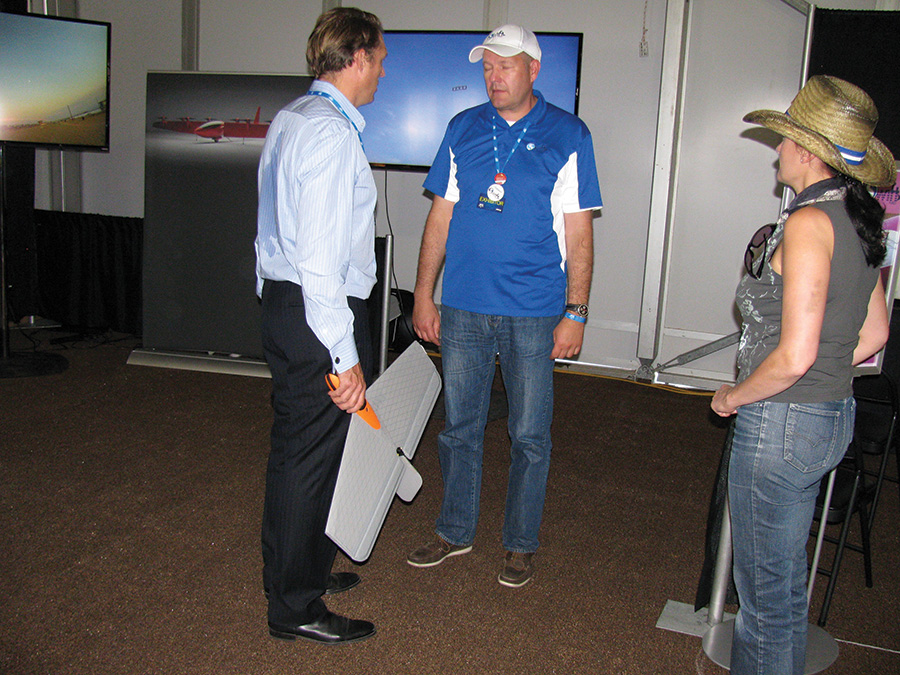 JoeBen Bevirt of Joby Aviation and Joby Motors, among other enterprises, was on hand to answer questions from a constant flow of visitors.

Seeley and Moore’s Sky Taxis would be four times faster than cars and two times faster than a Learjet on a point-to-point basis. Without pushing the boundaries of easily achievable performance with current technology, they could take users at 120 mph on “your very own wormhole through the sky.” Such “bizjets for the masses” would avoid TSA frisks and let you off at or within walking distance of your destination—much more convenient than the hours-long battle to get to or from (and through) large or small airports.

CAFE plans a series of challenges, similar to the very successful Green Flight Challenge, which will encourage competitors to use wheel motors to shorten takeoff and landing runs, quiet propellers to make small aircraft good neighbors, and a range of other technologies that would lead to the neighborhood-friendly airplane and accompanying pocket airports. Dr. Seeley thinks EAA members could win these challenges. 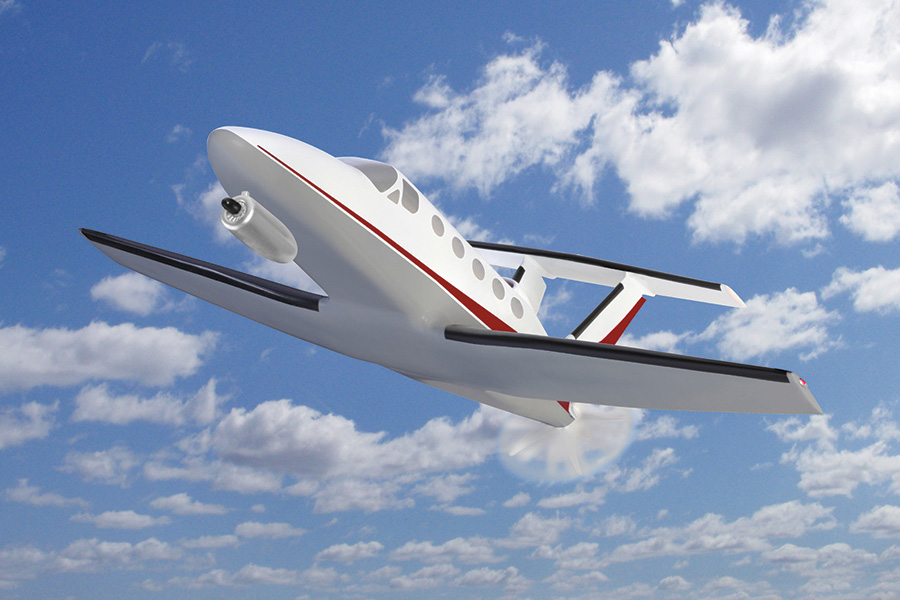 Dr. Seeley would make every adult a pilot, setting his or her own destination and being taken there with greater precision and safety than possible today. This would significantly expand the flying base from the 590,000 licensed pilots (lower than the number of doctors, according to my checkride overseer) now able to enjoy the freedom of the skies. 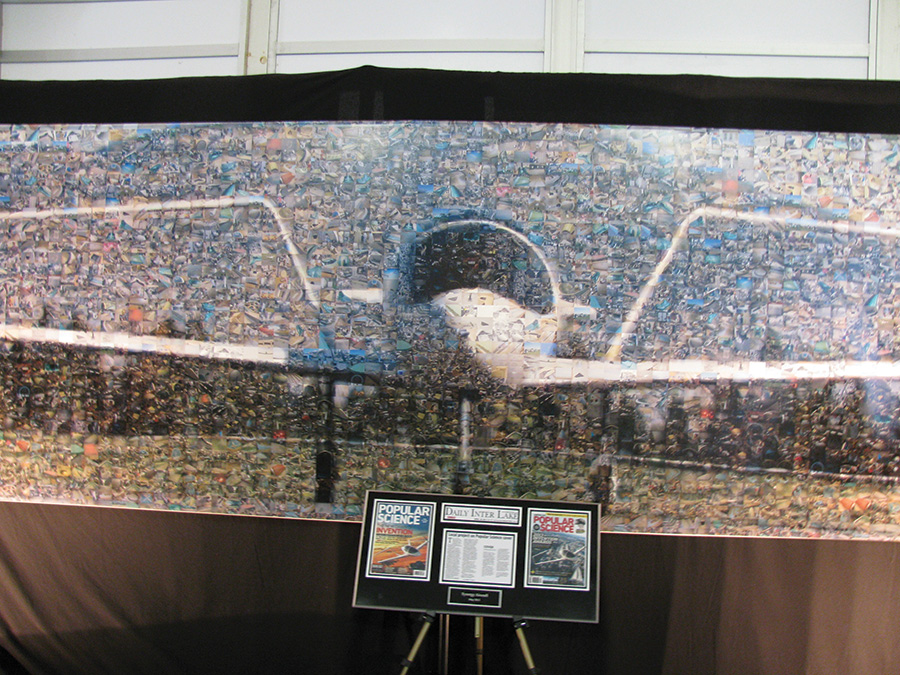 John McGinnis and family were on hand to discuss the future for his futuristic Synergy high-performance lightplane. Mosaic was created using a program called Mosaic and gleaned from 4,000 images.

Several vendors displayed designs to eliminate runways altogether, or to improve the performance and economy of existing airplanes. If Dr. Seeley’s vision is to become reality, airplanes will need to achieve more with less—as shown at AirVenture.

The Lam Aileron is an outgrowth of the roll control system the late Larry Lam developed through the 1980s. Applied to his little Wanderer, a low-wing, two-seat homebuilt, Lam claimed it not only eliminated adverse yaw, but helped make the airplane fly faster and land slower than it would have if equipped with more conventional controls.

Larry’s son Michael, working with Greg Cole of Windward Performance, added this system to a Cessna Corvallis in Cole’s Bend, Oregon workshop over the past few years. They flew the converted airplane to Oshkosh, where it was parked opposite the Aviat CNG demonstrator at the Innovation Pavilion’s entrance.

Michael patiently explained the operation of the aileron’s up-only operation (“Not spoilers,” he kept insisting) and the Fowler-flap below. Because the Lam system allows the flaps to be lengthened to include the portion of the trailing edge that would normally be occupied by just the ailerons, the flaps are more effective, improving the maximum lift coefficient of the wing. This makes it possible to use a smaller wing, which reduces wetted area and increases speed. Compared to a stock Corvallis, Lam says the modified Corvallis has a lower stall speed, higher cruise speed, better rate of climb, and superior handling characteristics. They also claim a fuel savings of 20–30%.

Caren Sandusky of Reboot Technology had a display on her Mockingbird VTOL craft, a swing-wing, variable-geometry vehicle that looked a bit like something from Avatar. Its turbine propulsion would lift and motivate the craft through multi-blade fans similar to Caren’s patented ceiling air-conditioning fans, high-efficiency units with blades similar to biplane wings.

Alex Stoll, an aeronautical engineer with Joby Aviation, explained several images of a bird-like creation on which differential thrust from cleverly concealed rotors at the wingtips and on the vertical stabilizer provide propulsion and control. A hybrid version could take two passengers up to 700 miles at 200 mph. Alex is currently test flying a “mule” that has all the utility, but little of the beauty, of the planned vehicle. 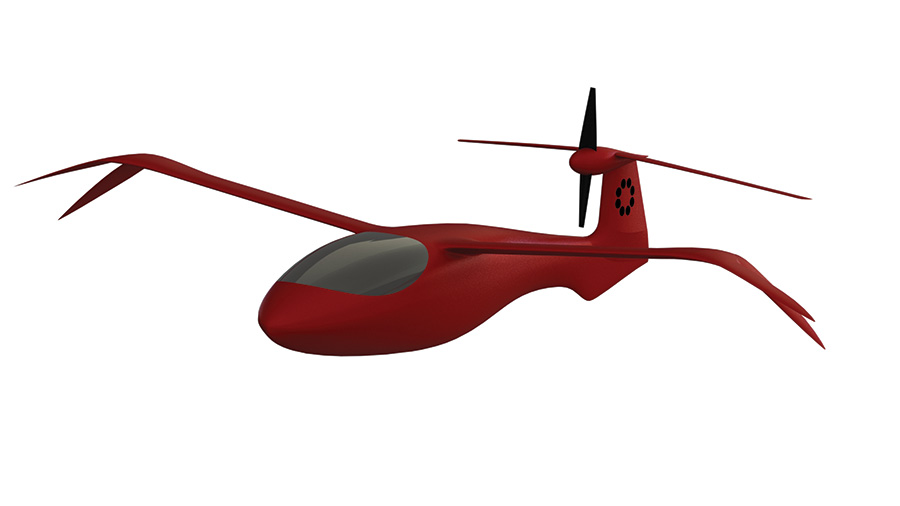 Next to Joby’s display, Joseph Hutterer, a veteran aeronautical engineer with 42 years in the industry, showed his hybrid aircraft, a unique approach to improving the performance, safety, and economy of light twin aircraft.

Instead of mounting one engine on each wing, Hutterer has a single large turboprop on his aircraft’s tail for long-range cruising. A small, retractable jet turbine on the nose of the craft drops down to add thrust during takeoff and climb, then retracts at altitude. This patented design eliminates light-twin asymmetric handling problems and lowers fuel use and noise.

Tomas Brøedreskift was on hand from Norway to show a model of his P2 Equator hybrid amphibian, covered in an earlier KITPLANES® article. It is a hybrid, with a reversible-thrust electric motor mounted on its high tail, much like a Seawind. Its roomy cabin and simplified flight and power controls should make it a favorite with future owners. 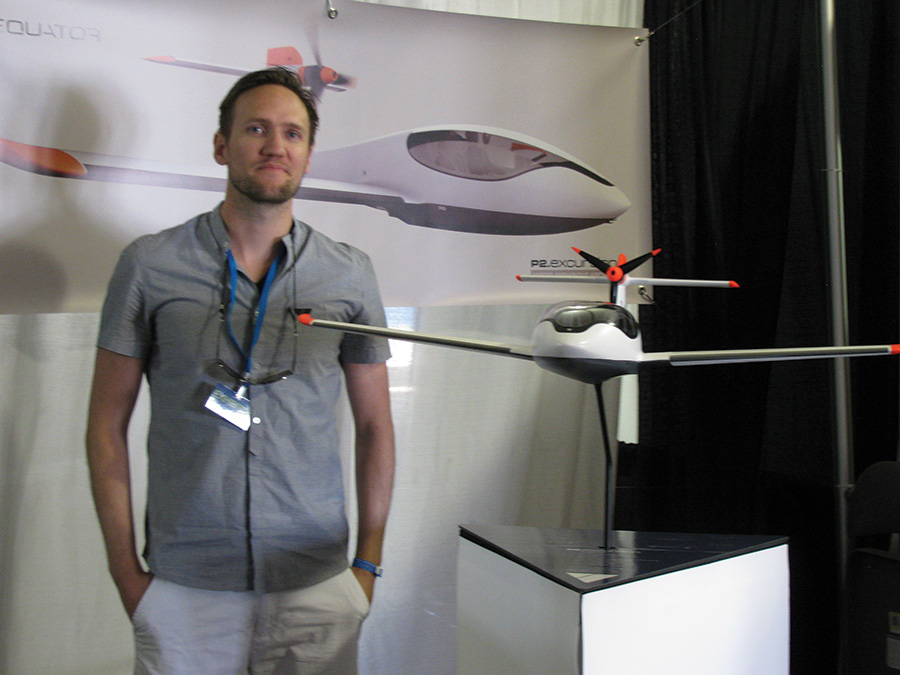 Tomas Broedreskift came from Norway to show his hybrid amphibian.

Getting the Lead Out

Both Swift Fuels and Aviat presented alternatives to the dwindling supply of 100-octane low-lead aviation gasoline.

Swift notes their proprietary processes synthesize petroleum or bio-fuel sources into an unleaded fuel meeting strict ASTM D7719 standards that can be used as an economical “drop-in” substitute for 100LL. As icing on the cake, extended engine TBOs and up to seven-percent improved fuel economy point to lower overall operating costs. Swift fuel also claims lower emissions and health issues. 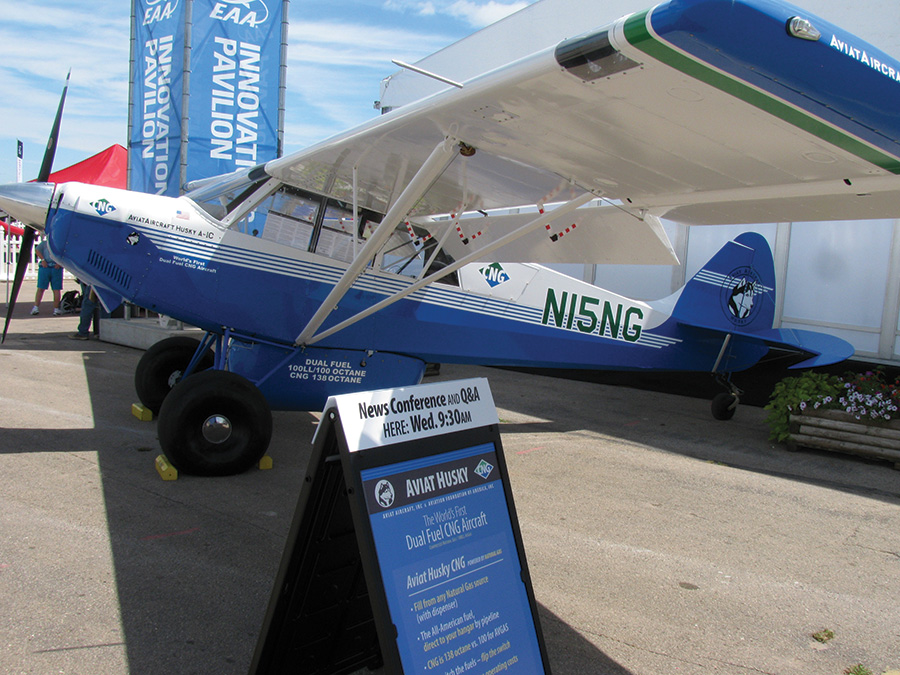 This Aviat Husky has a dual fuel system that allows the aircraft to use either compressed natural gas (CNG) or avgas.

In another approach to cleaner and more economical fuel burns, Aviat showed an A1-C Husky with a large bulge under the pilots’ seats, a compressed natural gas (CNG) container that makes the Aviat the “first dual fuel, piston powered aircraft to operate on both compressed natural gas (CNG) and aviation gasoline.” It could probably even fly on Swift’s no-lead. The airplane is stock except for its Lycoming’s 10:1 compression ratio to accommodate CNG combustion.

Sonex and the e-Flight Initiative

Aviat flew the dual-fuel machine more than 1000 miles from its Afton, Wyoming headquarters to park it outside the Innovation Pavilion. CNG, well known to truckers seeking refuge from high diesel prices, is also up to 80-percent cheaper than avgas. Less than $10 per hour in fuel costs should appeal to flight schools and other operators.

Where Swift’s no-lead can use the normal distribution networks for other liquid fuels, Aviat claims their bird can be fueled anywhere there’s a natural gas line. Regardless, the Husky’s seven-hour endurance should enable returning home to a waiting CNG supply if necessary.

Where are the Other Electrics?

Sonex had its electric Waiex on display, but never any representatives in view when I visited. It would be great to see them continue in their efforts, especially since their e-Flight Initiative was an early front-runner in the alternative energies realm.

Akoya brought a lovely display to the French enclave at Oshkosh, but no airplane. They’ve dropped further development of their electric and solar plans for now. 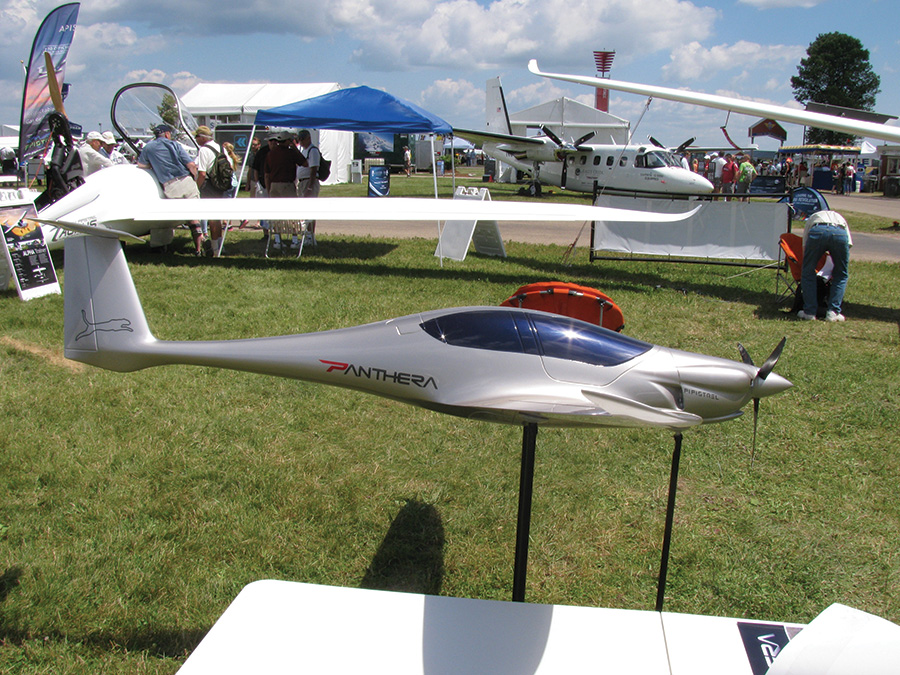 What I Got Out of It

Electric aircraft are ebbing and flowing, with personal dedication and the current fortunes of many individual builders determining what flies and what continues in hoped-for development. We’re still waiting for those great batteries and FAA approval for airplanes that are already here. I think we’ll see progress when LSA rules change to allow electric powerplants.

In the meantime, new aerodynamics and new fuel systems might show a cleaner, greener side to personal flight, and again, dedicated individuals will make all the difference.