We’ve looked at motors and their controllers in the last two episodes of this adventure, and now we’ll see how we get the energy stored in the electric airplane’s batteries to turn the propeller. We’ll also see how to maintain batteries to get longer flights in the greatest number. 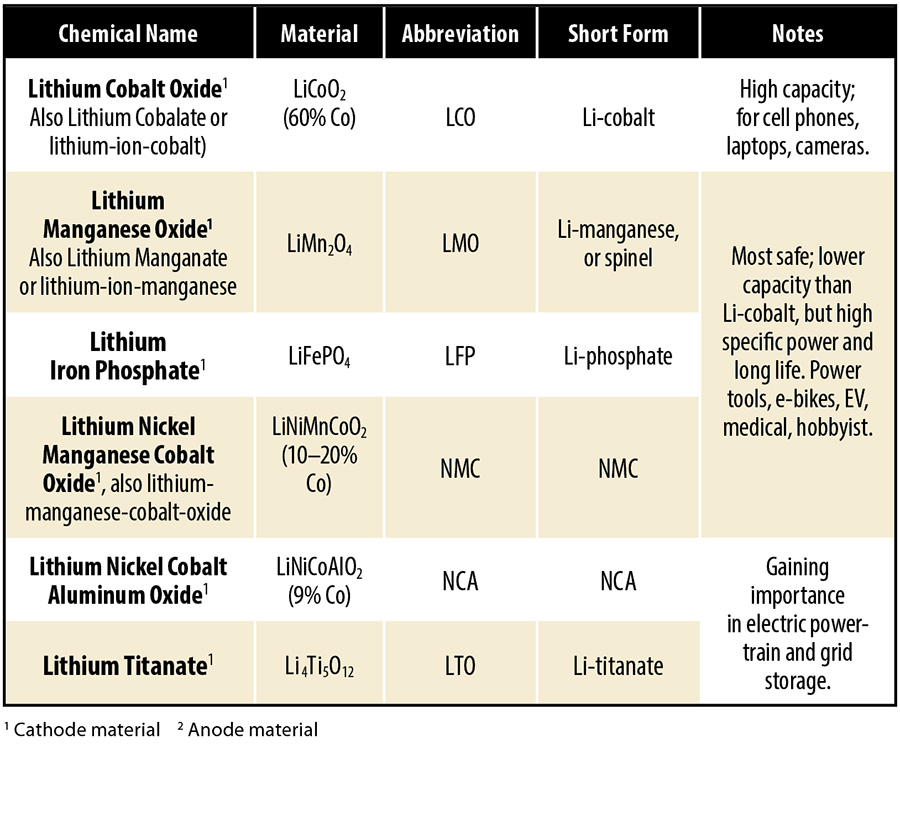 If you’re all thumbs about electronics, a “plug-and-play” system, in which the components are all designed or pre-selected to work and play well together, may be the answer. Excellent systems exist, although Randall Fishman of the Electric Aircraft Company (ElectraFlyer) has some cautions about that.

I noted in a CAFE Foundation blog entry, “Randall had his four-year-old ElectraFlyer on hand, an airplane which hides what he describes as the only currently available electric motor, controller, instrumentation, custom propeller hub, and battery package in its neatly cowled nose, and which has been available for years before Yuneec and Pipistrel (and now FES) announced their systems. He avoids the term ‘plug and play’ because he’s wary of using connector plugs to carry high amperage and high-frequency between the motor and controller, preferring battery cable lugs and bolts for secure connections.”

As noted, ElectraFlyer, Pipistrel, and FES have plug-and-play systems, each in power ranges rarely exceeding 50 kilowatts. ElectraFlyer offers a simple 20- horsepower brushed motor with controller and battery packs with optional sizes for different endurances (and prices). Yuneec is limiting sales to units on complete airplanes at this time.

Designers/builders are responsible for gaining the knowledge and taking responsibility for selecting and coordinating operation of multiple elements. It’s not as easy as it looks, requiring the right combination of motor, controller, batteries, and support devices (cooling systems, battery management system, charger, connecting bus, and instrumentation). 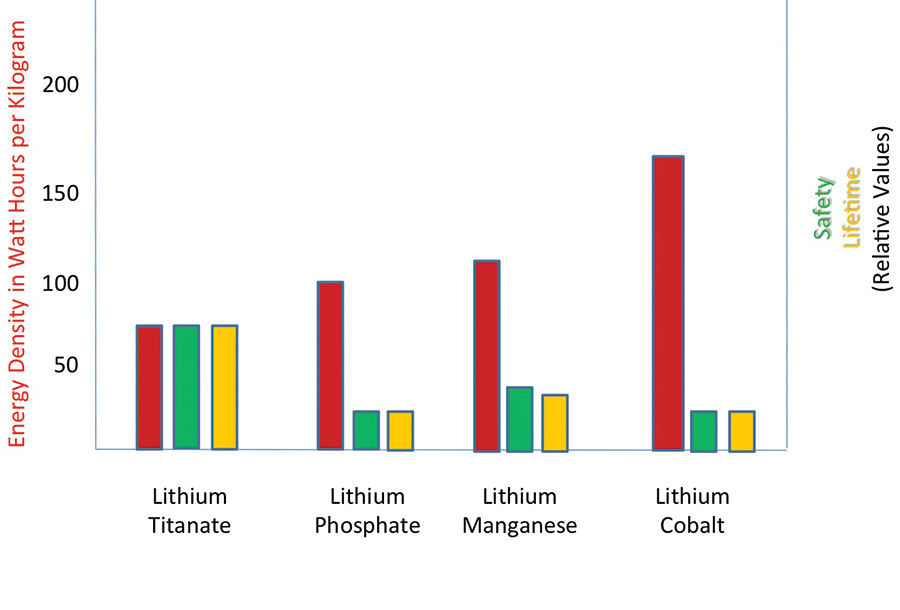 Patrick McLaughlin of Mountain High Oxygen explains there really are two types of lithium batteries—those with and those without a “buffer” material such as manganese oxide or iron phosphate (A123 cells). The buffer material does make batteries less volatile, but also reduces the energy density of the cells, important in weight calculations.

Differing chemistries provide either more power or longer energy storage. These would translate into the battery’s ability to provide high power for a shorter period, or to release energy over a longer period. With most chemistries available, you can’t have both in one battery.

Panacis supplied batteries to the Beyond Aviation electric Cessna 172 project, now unfortunately closed down. Because the packs were to be stored in the motor compartment and behind the two occupants, safety was a prime consideration.

Steve Carkner, Chief Technical Officer (CTO) for Panacis, advises, “Panacis uses a blend of lithium metals including nickel, cobalt, titanium, and manganese in our battery packs. The exact blend ratio is modified to suit the application.” Note that the cobalt tends to raise the power output and thus the flammability issue, where titanium and manganese tend to dampen thermal upsets.

Leading battery companies perform intense quality control on their cells, with most quoting a failure of one cell in a billion as a goal. NASA’s battery ambassador, Dr. Eric Darcy, has been able to test for internal flaws at the cell level to qualify them for use in space suits—certainly an application requiring utmost reliability.

Several sources explain that increasing the power of cells in a battery pack makes things relatively less safe, and that manufacturers have to decide how much each factor counts.

Lithium polymer batteries use a polymer, or plastic electrolyte, slightly less powerful than their liquid electrolyte counterparts, but are otherwise treated much the same, although they often require a specific type of charger.

Taking Charge of the Charge

To prevent damage from over or undercharging, bursting into flame (thermal runaways), and other hazardous conditions, electric aircraft makers incorporate mechanical means to cool the batteries, and battery management systems (BMS) as an integral part of their packaging.

David Ullman, President of EAA Chapter 292 and OSU professor emeritus says, “The whole concept of a BMS didn’t exist with lead acid and wouldn’t exist if batteries were perfectly matched throughout their life—which is impossible. I suspect that the BMS will become integral with the batteries in short time.”

(Eric Darcy, NASA’s “battery ambassador,” might disagree, at least partly, with Ullman. He’s worked with battery makers to create at least initially matched sets of defect-free batteries for spacesuits—where failure is not an option.) 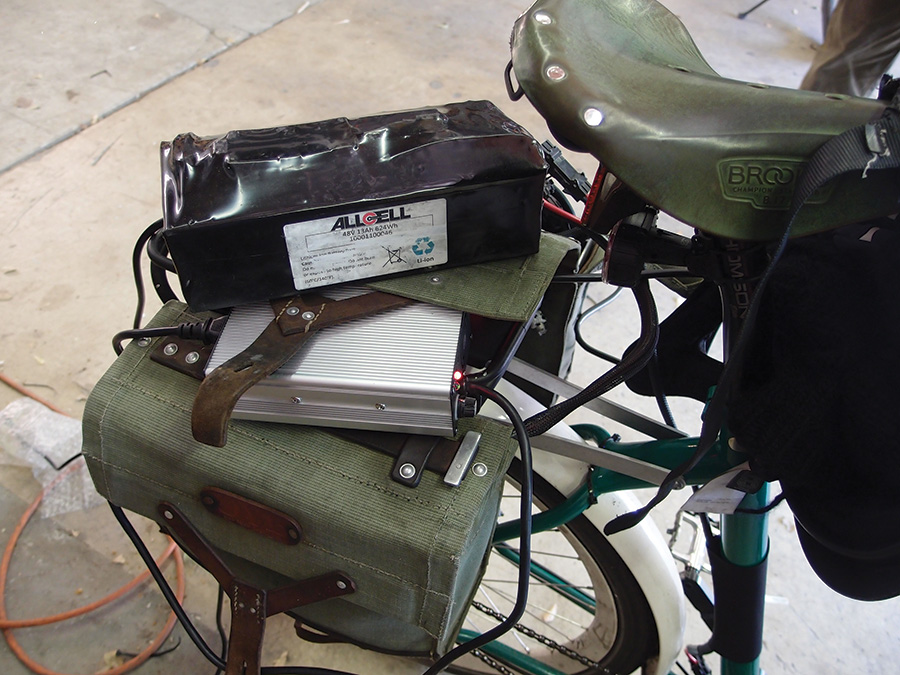 AllCell battery pack as mounted on an e-bike at EcoSpeed, Portland, Oregon while being charged.

Batteries need room for airflow, with space between individual cells if possible. Randall Fishman’s battery packs on his ULS pull in air through an underwing intake and discharge it from a trailing edge vent. Randall points out that many of the spectacular model aircraft battery fires we see on YouTube are caused by tightly packed batteries sealed in shrink wrap, with only wires protruding. R/C flyers often push the limits on their aircraft, recharge quickly after a flight, and send the airplane skyward for another workout. Batteries sometimes self-immolate in protest.

AllCell Technologies substitutes a phase-change material for air. Each lithium tri-metal cell is surrounded by a graphite and wax foam-like substance that reacts to internal battery heat or external ambient temperatures to keep cells chilled, a technology successfully used on electric bicycles and a racing motorcycle.

Fishman and others fly in a manner that promotes cool running and respect for the batteries’ “C rating,” the safe continuous discharge rate for that battery.

Fishman, using a high C rate for takeoff, throttles back and cruises at fractional C rates. This keeps motor, controller, and batteries cool. Solar craft such as Sunseeker or Solar Impulse may use only 1/10th maximum power at cruise (compared to the 75% cruise power of many light aircraft—or the 65% economy cruise).

One can protect lithium cells by not over- or under-charging them and staying in practical operating limits. One electric tricycle user reports that he “routinely use[s] 3.0 volts cutoff under load, putting a safe under-voltage limit on the pack.” He never exceeds 4.3 volts per cell and never discharges the cells under 2.7 volts. These limits keep batteries in a safe operating range and promote longer cycle life.

On his electric Lazair forum, Dale Kramer advises not running LiPos below 3.0 volts. Dropping to 2.7 volts, often a safe cutoff point for LiPo battery operation, leaves only 15% operating capacity and may lead to battery damage.

Managing Electrically and Automatically Beyond the Pilot’s Ability

Battery packs can comprise hundreds of cells. Keeping them balanced and within tolerances would be more than even a dedicated observer could manage.

Battery management systems keep track of each battery or string of batteries in a pack, regulate their voltage, temperature, and current levels, and help ensure safe operation. A BMS monitors each cell’s voltage and the total voltage for the pack. It will alarm or intercede if the individual cell falls below or above a setpoint voltage. The BMS can do the same for temperatures of cells and the pack.

This leads to a design decision—just how much control of battery and motor operation should be automated and how much left to pilot intervention?

BMS internal switching can reduce or stop battery operation if temperatures or voltages go beyond setpoints. This could be hazardous. A pilot attempting a go-around, for instance, would require additional power from the motor at the point where a battery is signaling that it is operating at an over-voltage or over-temperature condition. A shut down during such a maneuver could be disastrous. Such programming must be sorted out before trying out the new electric airplane.

The BMS or battery charger may “balance” cells in the battery pack by cutting off current to cells which are already charged while allowing current to flow to less charged cells. This balancing enables each cell to be “topped up” to give the greatest endurance. 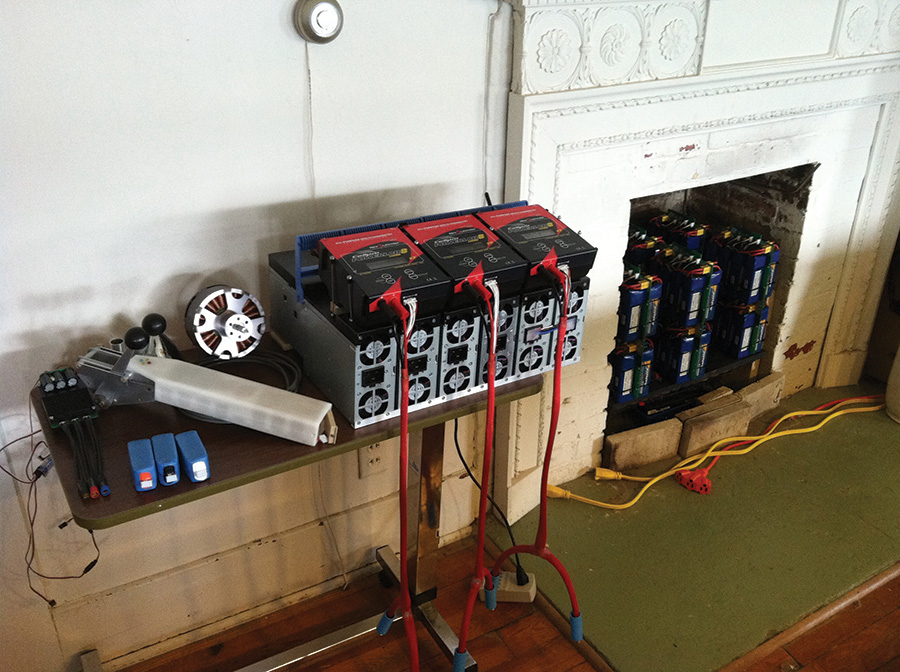 To prevent conflagrations, Dale Kramer recharges his electric Lazair’s batteries while they are tucked inside his fireplace with the damper verifiably open. He mounts four individual battery packs inside his wingroots, each pack monitored by cell-level reporting.

To protect batteries and prevent overheating in flight, Randall Fishman flew his ElectraFlyer-C at less than the batteries’ rated discharge capability, preventing heat buildup in flight and extending battery life. On his newest ULS, each wing-mounted battery box has a forward plenum that captures high-pressure cooling air from the lower leading edge of each wing and an upper aft vent in a low-pressure area to release heat from the batteries. Each box can have one or two battery packs inside, to suit desired flight time or the day’s soaring prospects.

Individual battery cells, thin rectangles stacked horizontally in each pack, are spaced to allow air to flow around each before the mildly heated air exits the airplane through the low-pressure vent.

Advice from a Battery Integrator

Steve Carkner explains, “We use passive cooling in most of our battery packs. We see this as a safer alternative to forced liquid cooling systems that can fail and leak, and also add significant weight to the battery pack. We use multi-point thermal monitoring in our battery packs and have patented technologies that monitor thermal conditions, not only for the individual cells that make up the battery [echoing David Ullman], but also the control electronics and interconnection points. We monitor every single cell inside our battery. Many battery companies group many small cells together and then monitor the group; this is dangerous as a single point of failure in the group may be missed. By monitoring the temperature of every single cell in the battery pack, temperature anomalies can be identified immediately and traced to a specific cell and location.”

He concludes, “Any time you store energy, there is going to be potential for safety issues. Treating energy storage systems with respect and ensuring appropriate levels of safety, controls, and monitoring will be critical in ensuring continued public safety.”