What kind of world-class competition can we expect from a group of volunteers, all of them highly professional, but none making a living in the aircraft field, as they try to make flight a greener experience? A great one, if the group’s history is any indication. 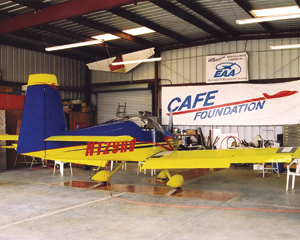 The CAFE Foundation’s highly accurate scales take the measure of a Van’s RV-9A during an Aircraft Performance Report.

Looking at aeronautical history overall, odds are that individuals and small teams, as much as any industrial giant, have accomplished enormous feats: the Wright brothers themselves, with their engine-building genius mechanic Charlie Taylor;Charles Lindbergh and the struggling little Ryan firm in San Diego; Burt Rutan and tight clusters of dedicated experts and craftsmen in the isolation of the Mojave Desert.

Now, a seven-member volunteer board heading up the CAFE Foundation is organizing a 2011 competition-the Green Flight Challenge. With a simple goal-flying a 200-mile course at an average speed of 100 miles per hour and achieving an economy of 200 passenger miles per gallon-CAFE (Comparative Aircraft Flight Efficiency) would seem to have set an unreachable objective, but so far 13 teams have entered and met the demanding design goals.

NASA is putting up the $1.5 million purse, with a $150,000 added prize for the best biofueled entry, and the Foundation must organize and run the event in a professional way that will satisfy official world-record keepers and its potential sponsors.

This is not the first rodeo for this band, which seeks the furtherance of aircraft performance, efficiency and, ultimately, the environmental purification of flight itself. The Foundation, headquartered in Santa Rosa, California, and driven by its board of multi-talented individuals, has had, is having, and will continue to have an enormous effect on the history of general aviation. Their demonstrated capabilities have forced an open and honest look at the claims made for aircraft, and enhanced the performance, handling and safety characteristics of modern airplanes.

The CAFE Foundation is known for its scientifically rigorous test procedures, well-documented testing of more than 25 general aviation and homebuilt aircraft, academically far-ranging online technical library, and for the last four years, its Electric Aircraft Symposiums. All of this has been done with an atypical bunch by any standard. Founder and President Brien Seeley, for instance, is an eye surgeon whose hobbies include research in neurology; Vice President Larry Ford is a dentist, and board members demonstrate talents in teaching, electronics and precision machining-and then they top those skills with their accomplishments in pushing flying to new heights. 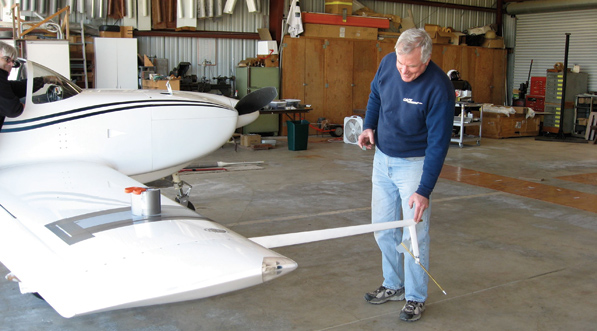 CAFE started in the mid-1970s in the wake of the OPEC oil embargo that left motorists lining up at gas stations on alternate days for even and odd-numbered license plates. Seeley, a pilot who built a freeway-legal electric car while an intern, saw a need to make aircraft more efficient. His formula, V(elocity) x mpg x W(eight) mirrored that derived by Nobel Physicist Teodor von Karman in the 1950s, and became a touchstone for predicting real-world aircraft efficiency.

This realistic, pragmatic approach highlights much of the Foundation’s efforts. For instance, Board member Steve Williams, a former HP engineer, has designed inventive solutions and creations that help to precisely measureaircraft performance and ensure that prizes offered by the Foundation are worthy of pursuit. The famous CAFE scales were designed and built by volunteers from EAA Chapter 124, with funding from the national EAA organization. They can precisely measure an aircraft’s weight before and after a prize run and thereby ensure accurate tallying of fuel use. 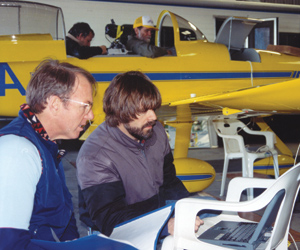 Brien Seeley (left) and Steve Williams consider the data recorded during a flight test of the Van’s factory RV-8A.

CAFE is hard-driving but free of the restrictive attributes of many organizations on a mission, as stated in this explication from its web site: "Volunteers are free from corporate conservatism, bureaucratic stagnation and the ruts those entail. This makes them eager to try other paths and thus overcome challenges. Volunteers can better afford to be decisive, to commit themselves, to experiment and thus, to learn. The surest mechanism for such learning is that of the academy, wherein each volunteer does not experiment in a vacuum, but rather is both abetted and held accountable by their peers. CAFE has always been just such a ‘think tank’ and its members courteously hold one another to high standards while operating on the principle of ‘Prove it.’"

Ford explains the scientific efforts to measure aircraft drag and provide actual numbers for comparing aircraft performance, a goal inherent in the CAFE name. He highlights the work of many past and present CAFE volunteers, including the development of the CAFE barograph, a significant instrument that allowed objective flight performance characterization of individual airplanes and honest comparisons between aircraft.

CAFE also benefited from the contributions of Jack Norris and his creation of "zero thrust glide testing." This innovation involved finding the point at which the propeller was not creating drag or producing thrust. Norris concluded that at this speed and power loading the airplane was essentially a glider, and its true best gliding speed, lift-to-drag ratio and other important attributes could be determined. When tests showed slight departures from other drag calculations, CAFE expanded the test by having a propeller-less Cessna 152 towed to 10,000 feet and releasing it to acquire pure gliding flight data. The tests proved that the CAFE zero thrust glide testing method was a valid technique. 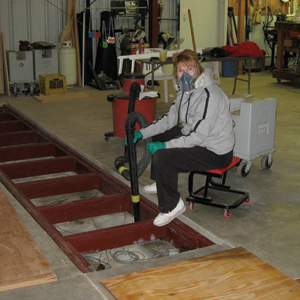 The Foundation has encouraged performance testing at the competition level with events such as the CAFE 400, a 400-mile "race," held every year from 1981 to 1990, which really measured an aircraft’s efficiency on a straightforward handicapping system. Today that event has been upgraded to the CAFE Challenge, with Gary Hertzler holding the title for the performance of his modified VariEze. A second, more involved test, the Triaviathon, measures not only the aircraft’s weight, speed and range, but its top speed, stall speed and rate of climb torecognize superlative overall performance. That prize has been held by Dave Anders for the last six years for his sparkling performance with a highly modified RV-4, which also won the Noise Prize in the Personal Air Vehicle (PAV) Centennial Challenge.

Seeley emphasizes the need to make new directions in aviation "transformative." This term is highlighted repeatedly, with examples including personal air vehicles, and integrated displays that will make navigation and adherence to air regulations easy even in instrument conditions. Additionally, he has expanded on research with which he’d been involved on the development of the electronic Certified Flight Instructor (eCFI). His three-part KITPLANES article on the subject can be found in the CAFE Reports and back issues of this magazine (June, July, August 2007).

The CAFE Foundation is a non-profit 501.c.3 organization, and donations are fully tax deductible. You can review the Foundation’s 29-year history (www.cafefoundation.org) to see how much it has accomplished with wise use of very little funding in the past. Recognize that in all those years of CAFE testing of Experimental aircraft, there have been zero injuries or accidents. Think what could be achieved in the future with private or corporate sponsorship for the CAFE Foundation and the Green Flight Challenge.

Seeley believes that technology and history are moving toward convergence around the need for and the possibilities inherent in transformative changes in transportation. He encourages everyone to work toward cleaner flight, in both aerodynamics and power. He also encourages prospective designers to reference the CAFE Technology Library, which contains seminal works by Fabio Goldschmied, for instance, regarding aircraft drag reduction. Although these writings date from 1964 through 1988, they are only now finding application in real aircraft designs, some of which will be participating in the Green Flight Challenge (GFC).

Scheduled for July 2011, the CAFE Green Flight Challenge will be held at Charles M. Schulz Airport in Santa Rosa, California. Not just an economy run for aircraft, demanding 200 seat miles per gallon for the 200-mile closed course run, the competition challenges competitors to achieve no more than a 52-mph stall speed, a total 2000-foot takeoff run to clear a 50-foot obstacle, and other handling and safety elements that will drive creation of real-world aircraft that can use the existing infrastructure.

The GFC will have the most diverse fleet of aircraft since the filming of Those Magnificent Men in Their Flying Machines, but without the use of fossil fuels for the most part, and extremely high mileage for those that do burn petrol. Airplanes will be propelled by hydrogen, diesel, biodiesel, gasoline, solar cells and batteries, and will display a wild range of configurations. Entrants are well-known in the field and bring fresh thinking, innovative approaches and a devotion to making aircraft more efficient to this event. Spans range from 16.7 feet (Quickie derivatives) to 75.5 feet (Embry-Riddle’s Eco-Eagle). All will fly on far lower power than even a light sport aircraft, and most will extract maximum cruise performance on astonishingly little energy expenditure. For instance, to meet the minimum fuel use requirement, a two-seater will need to use only one gallon of fuel per hour at 100 mph; a single-seater can use only one-half gallon per hour, or the energy equivalent in hydrogen or electricity. Most competitors are promising even better. The teams represent a cross section of the aviation community (see Table 1). 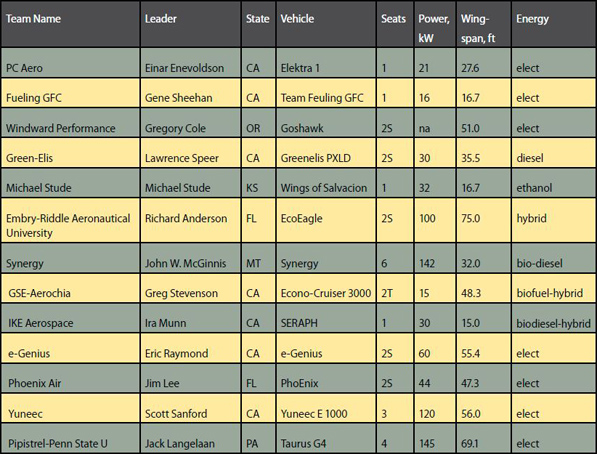 The Foundation is acting as an Allied Organization to NASA in this Challenge. This means that all NASA prize money will be awarded, but CAFE cannot use any of those funds for operational costs, and that creates the Foundation’s greatest challenge-for itself.

And here’s where this article takes a plaintive turn, a bit like the fund-raising pleas you hear on Public Radio during pledge week. The arguments for your making a contribution are similar. You benefit as a pilot, and general aviation benefits overall when new technology comes along that makes flying safer, easier or less expensive. You can have an active part in this development and the very future of light aviation through sponsoring the CAFE Foundation’s involvement in the GFC and helping fulfill NASA’s goals. These goals include:

-Driving progress in aerospace technology that is valuable to NASA’s missions.

-Encouraging the participation of independent teams, individual inventors, student groups and private companies of all sizes in aerospace research and development.

-Finding the most innovative solutions to technical challenges through competition and cooperation.

CAFE is actively pursuing, and in many ways leading, these efforts for the future, adding the value of its demonstrated capabilities and acknowledged reputation for scrupulous administration of such events.

Several years ago, I gave a widow’s mite to the Voyager project (Jack Norris was mission director on that!) and felt a great pride in having been a very small part in Dick Rutan’s and Jeanna Yeager’s accomplishment. Think of the pride you might feel if your contribution today was part of creating the new golden age in clean aviation, and the skies were soon filled with the quiet sounds of an exciting, brilliant future.

Dean Sigler has been a technical writer for30 years, with a liberal arts background and a Master’s degree in education. He writes the CAFE Foundation blog andhas spoken at the last two Electric Aircraft Symposia and at two Experimental Soaring Association workshops. Part of the Perlan Project, he is a private pilot, and hopes to get a sailplane rating soon.

Marc Cook - February 27, 2021
0
When we talk about Experimental/Amateur-Built aircraft with “regular” pilots, it’s common for the conversation...