Home Magazine Builder Spotlight Building on the Past 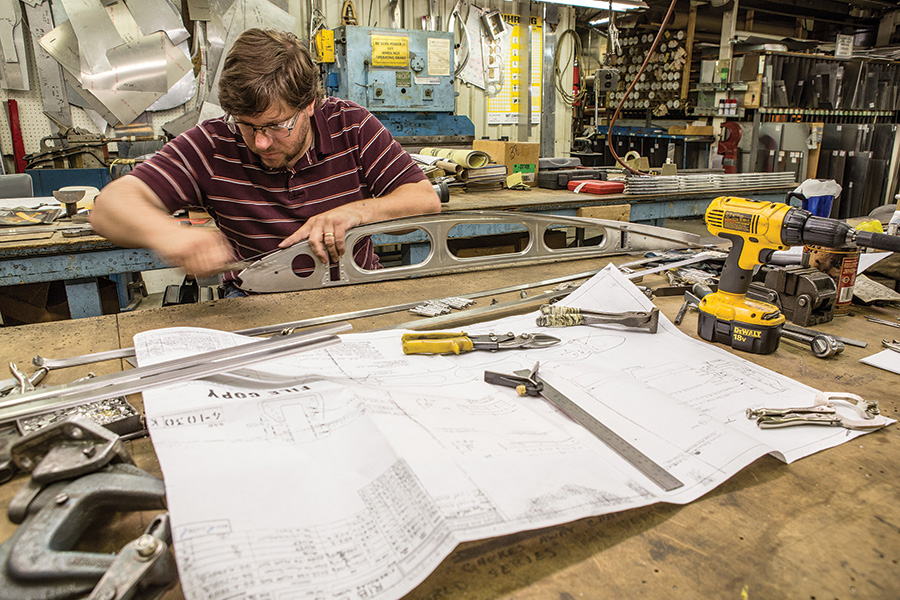 Unlike most other forms of transportation, obsolescence is not a defining challenge of aviation. Homebuilt or store-bought aircraft designed more than a half century ago are still flying, under construction, and in production in one form or another. The greatest challenge to an airplane’s flying future is a ready source of raw materials and approved parts that make it airworthy. This is especially true for designs drawn in the general aviation era that boomed after WW-II. 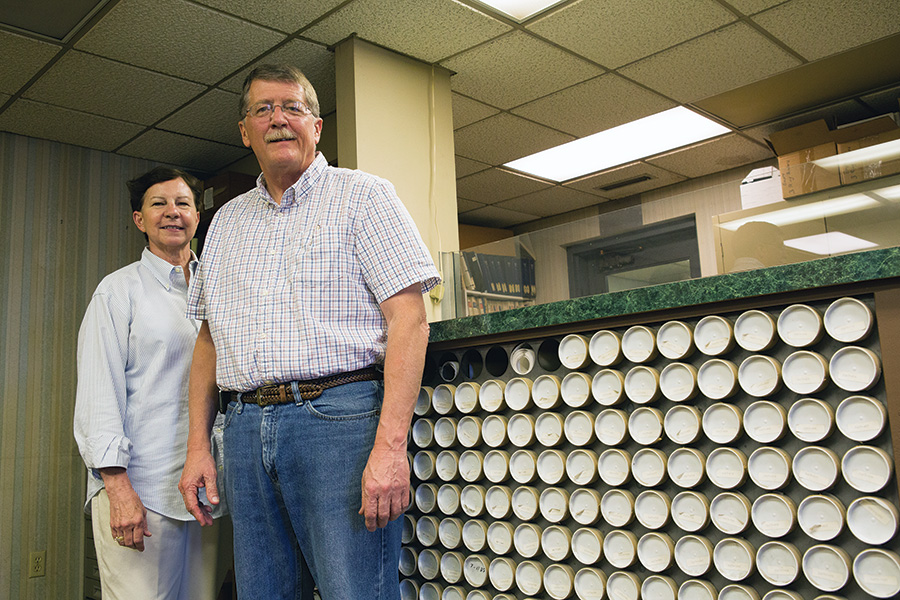 Mary Myers and Bill Read, Wag-Aero Group’s president and CEO, and just one cache of drawings for the more than 12,000 PMA parts it makes for classic Pipers, Aeroncas, and Taylorcraft.

The boom subsided as the 1950s transitioned to the 1960s, and the homebuilding movement of amateur-built Experimental aircraft began to grow. As manufacturers discontinued production and replaced classic designs with newer models, Dick and Bobbie Wagoner saw an opportunity. Owners of the discontinued aircraft needed the parts that would keep them flying, and homebuilders used many of the same parts on their airplanes. Traveling the nation, they bought inventories or surplus parts at auctions and, in the early 1960s, founded a catalog company to sell them—Wag-Aero. 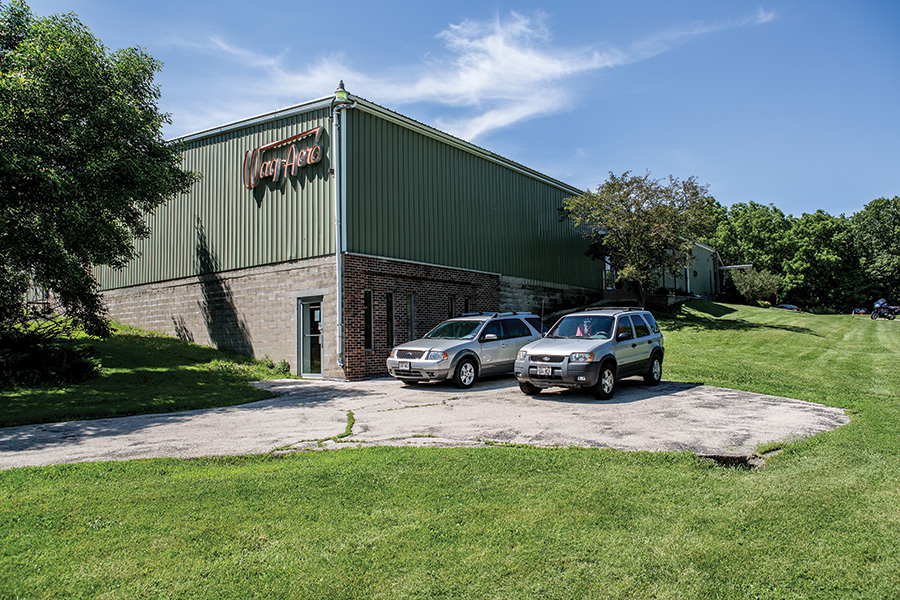 The entry to Wag-Aero’s facility, which includes an area for walk-in or fly-in customers, is just around the corner. 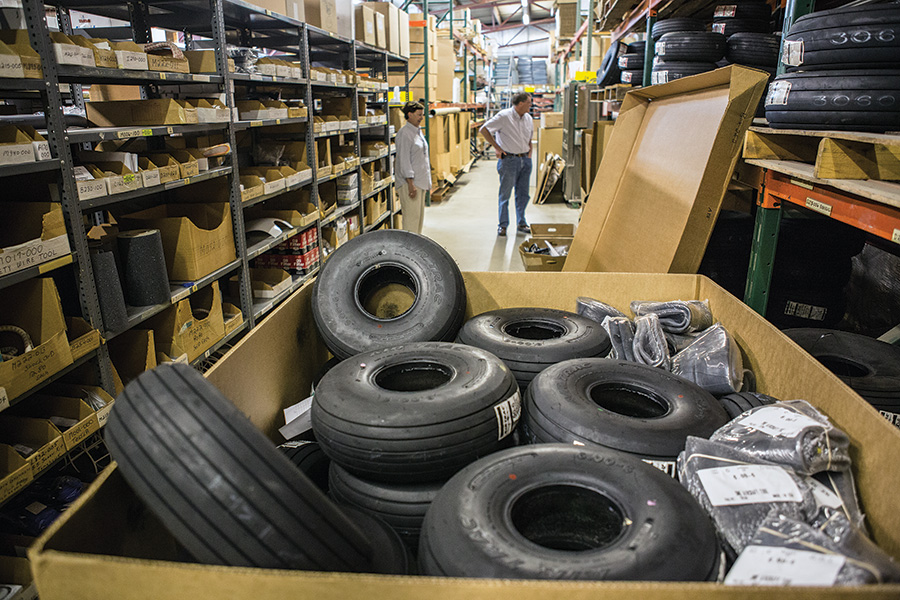 Roughly half of Wag-Aero’s 28,000-square-foot facility is warehouse.

In time they added aviation’s raw materials, chrome-moly steel and sheet aluminum. As their catalog business grew, they moved the company out of their basement in 1971 and built a 28,000-square-foot facility in Lyons, Wisconsin, a small town 45 miles southwest of Milwaukee. It’s just down the hill from the grassroots airfield they built near their home for their fly-in customers. Its 3100-foot east/west and 2100-foot north/south turf runways still serve Wag-Aero, said Bill Read and his wife, Mary Myers, who bought the company in 1995 and continue to build on the foundation the Wagoners laid. 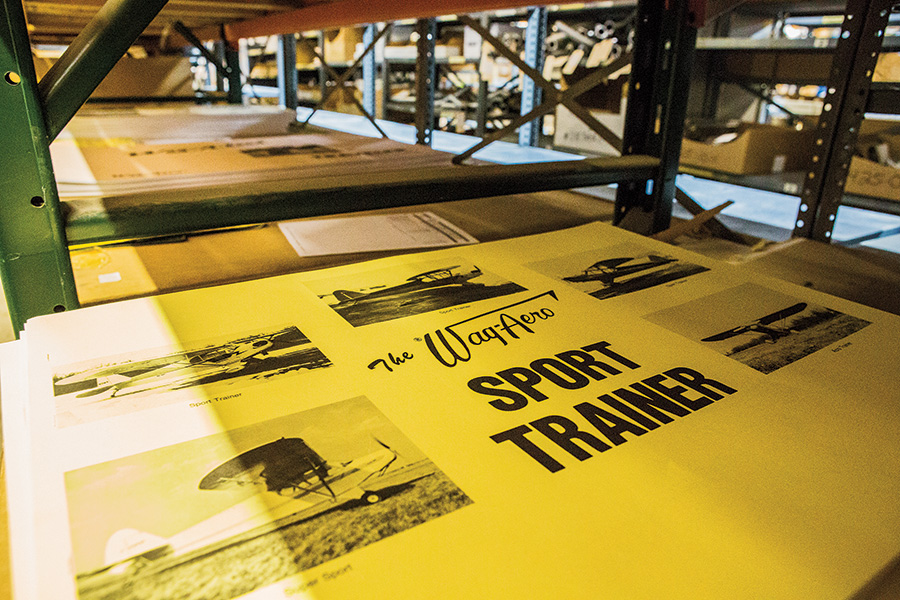 Of the three Wag-Aero replica Pipers, the Sport Trainer, an improved J-3 Cub, is the most popular.

Inventories of surplus parts were pretty much gone by the 1970s, and bogus parts became a growing concern. To provide a reliable supply of approved parts, the Wagoners formed Aero Fabricators. Operating under Part 21, it earned FAA Parts Manufacturer Approval (PMA) for 850 different parts, starting with the classic Pipers.

The Wagoners also tried to resurrect the venerable J-3 Cub. When they couldn’t acquire the rights, they created a new and improved replica of it, the CUBy. Making its first flight in 1975, its improvements included a fuselage of 4130 steel tubing in place of the original’s 1025 carbon steel, and a conventional elevator trim instead of the horizontal stabilizer’s jackscrew system. Wood wings soon gave way to metal spars and ribs. 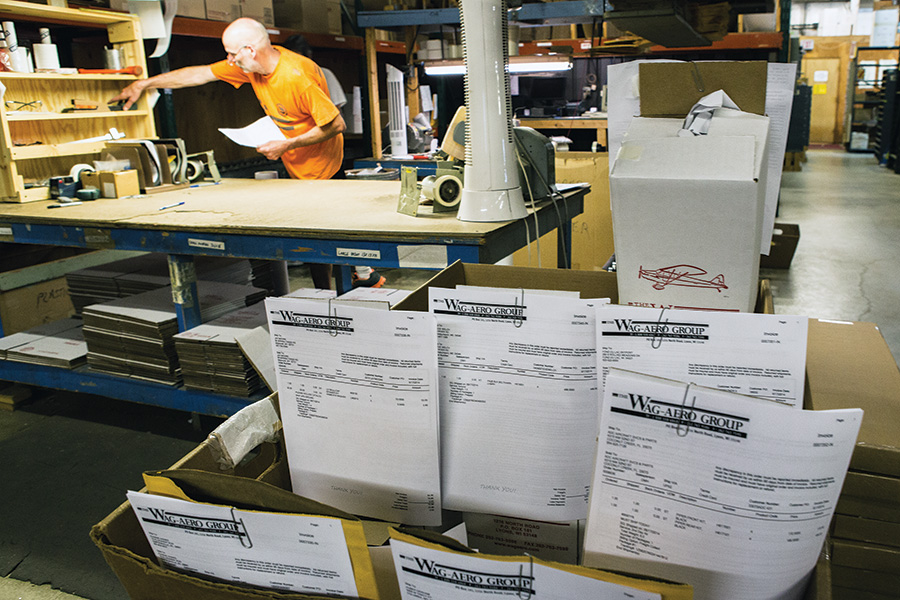 Regardless of when it receives an order, Wag-Aero strives to hand it off to UPS the very same day. These orders are bound for Wisconsin, Florida, Norway, and the United Kingdom.

Today, the CUBy is known as the Sport Trainer. It was soon followed by similar replicas, the Wag-A-Bond (See flight review on page 6), based on the two-seat side-by-side Piper PA-15 Vagabond, and Sportsman 2+2, based on the PA-14 Family Cruiser. All started as plansbuilt airplanes, as they are today. As the most popular of the three, said Read, the Sport Trainer is also available as a kit with the full range of options to create an aerobatic clip-wing, a Super Sport Trainer with 150-hp engine, and the greenhouse military versions, the L-4 or L-21.

Builders have a number of kit options that range from raw materials to quickbuild assembly. Complete kits are available, but most builders create their airplane one subassembly kit at a time. Most of them are like the fuselage kit, which is available tack- or finished-welded in the same fixtures Wag-Aero’s artisans use to create its PMA parts. 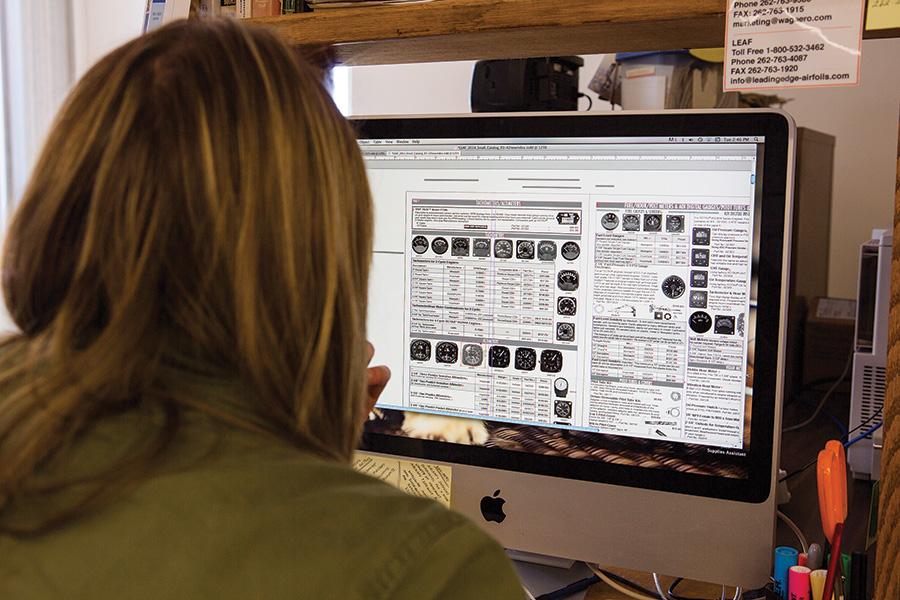 Marketing assistant Amy Andreas updates pages of instruments that serve both the online and print catalogs. 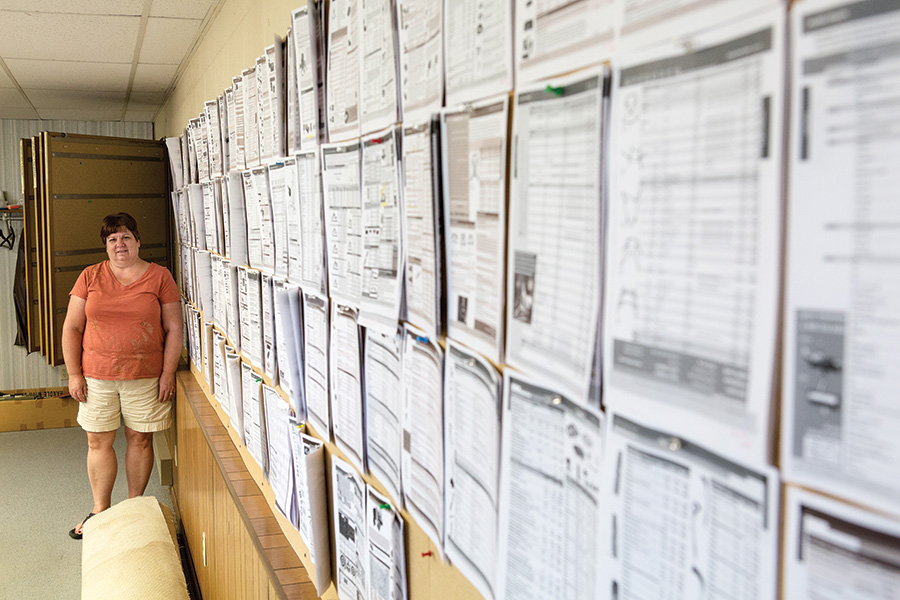 The number of people who want to build a classic Cub is a lot smaller than it was 10 years ago, said Read. Ready-to-fly Light Sport Aircraft based on the Piper Cub account for part of that, but societal change plays a bigger role. “People no longer want to spend their spare time building.” Most builders are older, semi-retired, he said, and Wag-Aero actively solicits photos of their work for the catalog and its cover. Retrieving the blow-up of the catalog cover, Read points to the builder’s autograph, which has become an annual Sun ‘n Fun and EAA AirVenture tradition.

Building and nurturing this relationship is a good way to learn what’s going on in the industry, he continued. “Cost conscious” and dedicated to “flying economically” describes the company’s typical customer. A growing number of them are not building, but they are getting hands-on with frugal flying classics like the J-3, Aeronca Champ, and Taylorcraft. 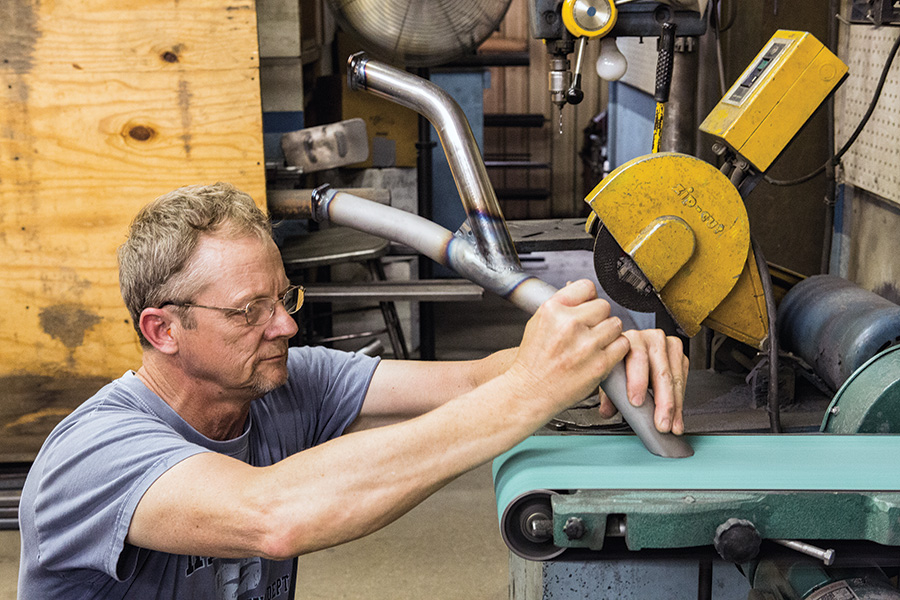 Gerry Stoflet shapes the end of an exhaust for a 7AC Champ he is welding in Wag-Aero’s Part 21 manufacturing spaces.

Wag-Aero also supports the educational aims of the 88 Charlies, a nonprofit group in Palmyra, Wisconsin, said Myers. Since 2009 it has promoted aviation, science, technology, engineering, and math by building and restoring airplanes. With approximately 30 youngsters involved, the group meets every Saturday morning and invests four hours of work on the current project, a T-craft BC-12D. 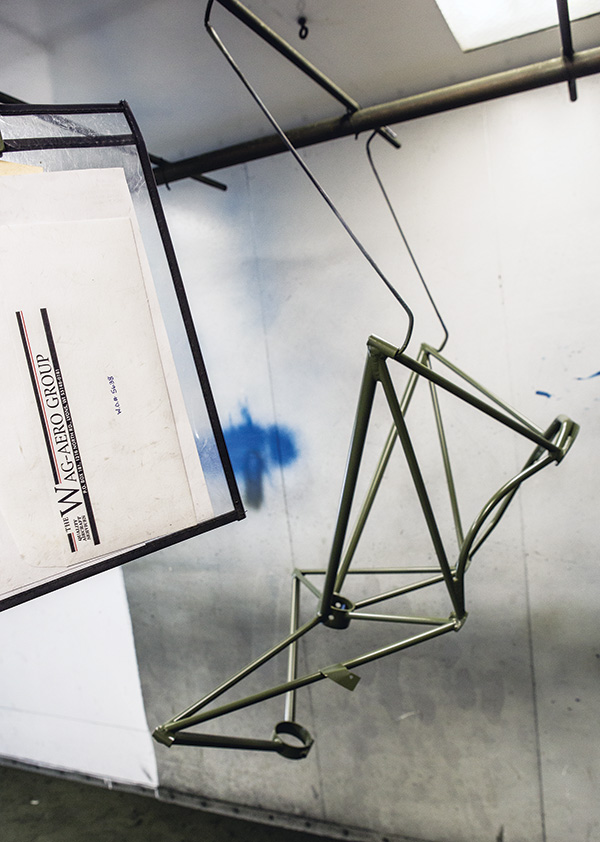 A repaired engine mount waits for its primer to dry in Wag-Aero’s paint booth.

“These airplanes were designed to fly forever,” said Read. “We have a critical mass of aircraft with no manufacturer to support them,” and meeting those needs has always been an integral part of the Wag-Aero business plan.

In addition to being Wag-Aero’s CEO, Read is a third-generation pilot who earned his ticket in 1980, after graduating from college, “I flew with my father and my grandfather before him, so we’ve always had an interest in aviation,” he said. Read met Myers, Wag-Aero Group’s president and FAA Designated Manufacturing Inspection Representative (DMIR) when they were earning their degrees in finance and accounting.

“Bill and I had spent years working our way up the career ladder for the same bank,” said Myers. In the early 1990s the couple decided that diversification was a good idea, and they became the owners of Wag-Aero on September 1, 1995. As its chairman, Read stayed with the bank for a few more years, she continued, “and I came to Wag-Aero to run the company.” Actually, it was a group of companies, “but we sold the propeller shop some years ago.”

Realizing that aviation was facing its next generational transition of active participants, Wag-Aero’s strategy was to grow by acquisition. First up was Viking, a Portland, Oregon, company known for ground support equipment including tow bars and the motorized Tow Buddy. In 2005 Wag-Aero bought Safe Air of Albert Lea, Minnesota, when its founder retired.

Holding all the supporting design data and originals drawings, Safe Air held approximately 11,000 PMAs—the “alphabet soup” of Aeronca Champs and the Taylorcraft. “We resubmitted the PMAs under our name,” said Read. He doesn’t want to think of the time and money it would take to earn 11,000 PMAs one or two at a time, although the company has done that for a number of parts for classic Cessna 120s and 140s.

When first looking at Safe Air, the couple queried the FAA Aircraft Registry and discovered 6,000 Aeronca Champs. “We can now make virtually any part for the Aeronca we have the drawings for,” and if a customer has a Champ’s data plate, Wag-Aero can provide PMA parts to make it an airplane. 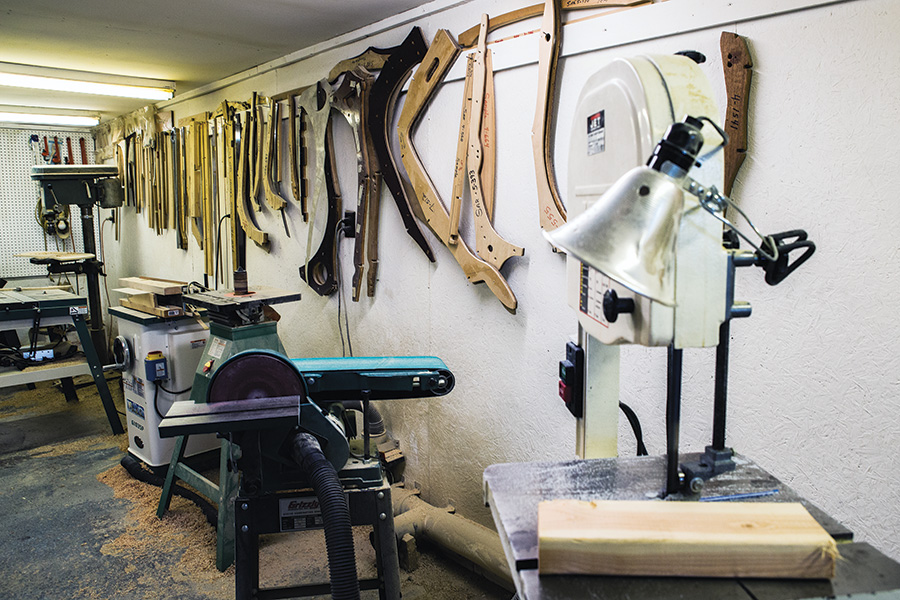 PMA patterns decorate the walls of the Wag-Aero woodshop.

Wag-Aero’s PMA parts also keep classic Taylorcraft flying. “They were all but abandoned when the BC-12D’s type certificate disappeared,” said Read. “It was owned by a guy in Texas, then there was some deal to build the airplane in Mexico, and now it’s gone.” When the FAA issued an airworthiness directive on the T-craft lift strut, Wag-Aero earned a PMA through an alternate method of compliance for the inspection and replacement lift struts.

Wag-Aero also holds a Part 145 repair station certificate for engine mounts and seat belts. “We have a hard time keeping up with the engine mount repairs,” said Myers. Flight schools are the primary participants in the mount exchange program, and they often keep a spare mount and engine on hand to keep their airplanes flying. “We have most of the common models in stock, including the 150/152, 172, and the like, but not many because keeping up with the repairs is a challenge.” Half of Wag-Aero’s 30 employees are dedicated to manufacturing PMA parts and making repairs. The other half, all cross-trained, are spread across customer service, the warehouse, and administration. 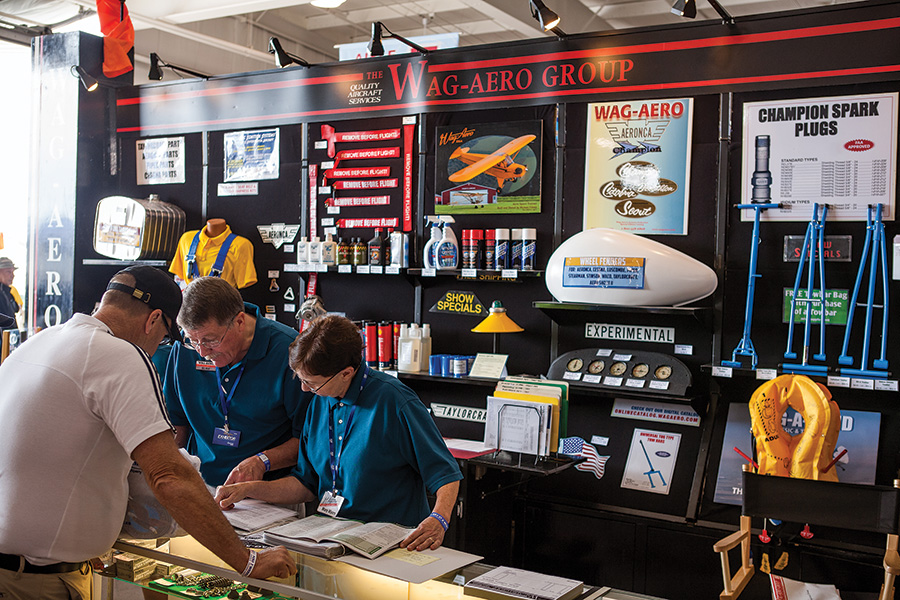 Wag-Aero displays its products online and in a hard-copy catalog. “We know that the paper catalog will eventually go by the wayside,” said Myers, a victim of growing online preference and the ever-increasing cost of postage. Wag-Aero produces two catalogs a year; their release coincides with the Sun ‘n Fun Fly-In and EAA AirVenture, where they distribute, on average, 5,000 copies. Wag-Aero mails another 500,000 catalogs every year, said Myers. The mailing list shrunk with the recession in 2008, but it’s slowly rebounding. Each mailing includes prospective customers and owners of classic airplanes culled from FAA lists.

Whether the catalog is online or in print, the majority of orders still come as phone calls—the six customer service reps handle 10,000 a month—but online orders are slowly growing. “We don’t get too many of those back-page order forms in the mail,” said Read. “We still have it in the catalog, but it’s not used much anymore.” Regardless of how they receive the order, the three full-time pickers (assisted by everyone, including Read and Myers when it’s busy) do their best to have the order ready by 5 p.m. the same day, which is when the UPS truck backs up to the loading dock and says “ahhhh.”

Following my GPS to Wag-Aero in Lyon, Wisconsin, I turned into the parking lot and stared in confusion. The sign on the building said Rotax and on the doorway, LEAF—Leading Edge Air Foils. Wag-Aero, said the friendly bear of a man with grease-stained hands, was around the corner. 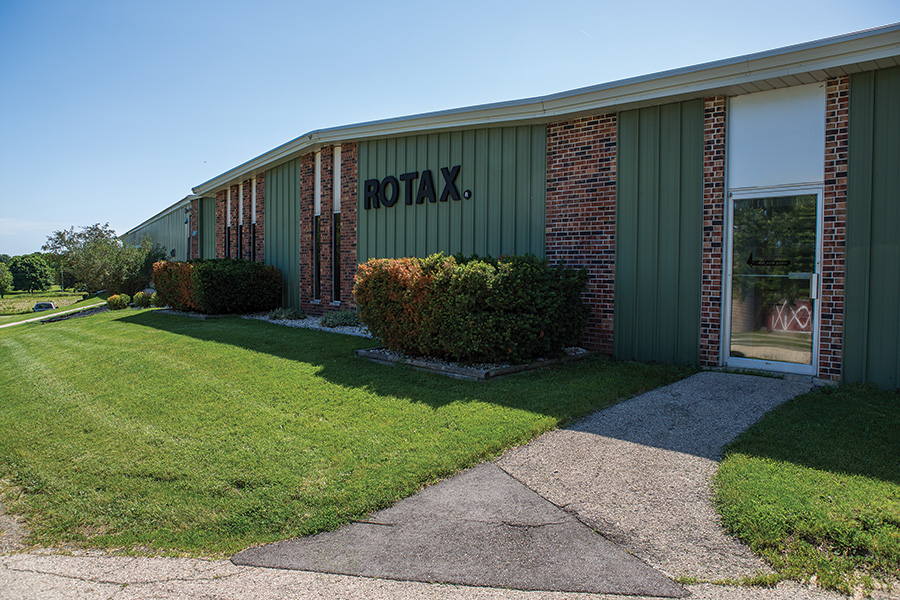 When I found Bill Read and Mary Myers around the corner, they quickly de-confused me. They bought LEAF in 2000 and moved it from Peyton, Colorado, to Wisconsin. The Midwest service center for Rotax engines, parts, and repairs, LEAF is a separate company, with separate ownership, and a separate storefront, hence my confusion. 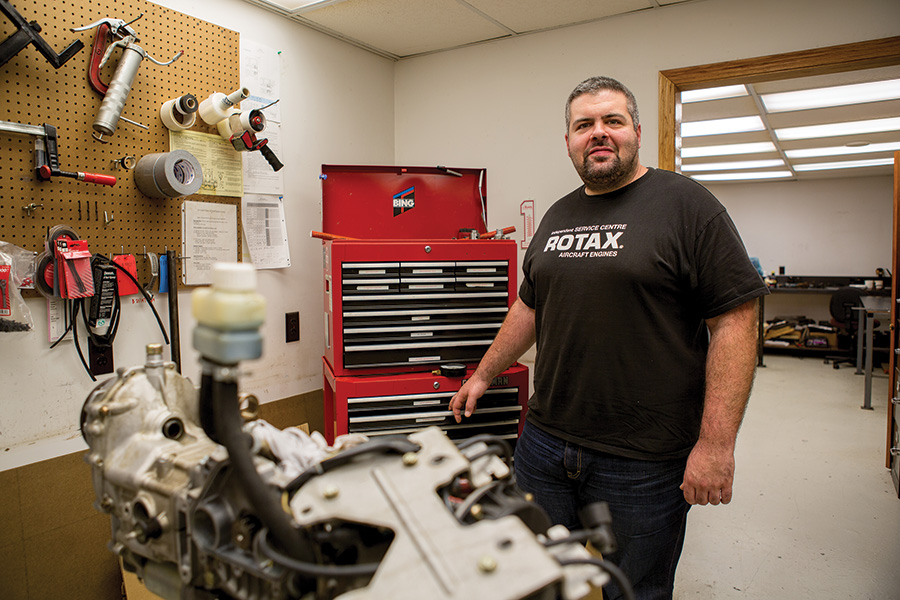 Trained at the factory in Austria, Brett Lawton is a Rotax Training School instructor and LEAF’s shop supervisor. Earning his A&P in 2004, he’s halfway through a top overhaul on a Rotax 582.

While LEAF is its own business with its own dedicated shop space (once occupied by a propeller shop), it employs Wag-Aero’s accounting, purchasing, and marketing departments through a joint operating agreement. And its customers are welcome to fly in to the grass strip just up the hill.