Ground effect applies regardless of aircraft weight or configuration.

Start at 4000 feet above the intended point of landing on runway heading with the throttles at idle and the speed brakes out. Perform a 360 descending turn, lowering the gear and flaps in the process and touch down at 90 knots as near the intended point as possible. Throttle and speed brakes could be used to salvage judgment errors, but the goal was to fly the entire maneuver without touching either. That was the simulated flameout approach we practiced.

What does this have to do with ground effect? In a word, beverages. The front- and back-seaters would wager a beverage. Whoever came closer to the touchdown target on speed won. Still not making the connection? About three-quarters of the way through the approach, I would lower the planes nose, making it appear to the other guy that Id land well short of the target spot. With this picture in mind, most guys were willing to double the bet. Id enter the round-out with the additional few knots gained by lowering the nose and coast in ground effect the 1500 feet down the runway to the target. Two beverages.

Ground effect is not imaginary or the airplane riding a bubble of compressed or re-directed air bouncing off the runway and impacting the planes underside. Its the result of the change in airflow when the airplane is lower than approximately one wingspan above the ground, and it affects lift, drag, longitudinal stability, elevator effectiveness and maybe even your airspeed indication.

Wingtip vortices. The air above a lift-producing wing is at a lower pressure than the air beneath it. A wingtip vortex is merely the high-pressure air rushing toward the low-pressure air. This high-energy air whipping around the wingtip entrains air a little farther from the tip, which entrains air a little farther from that, creating a horizontal tornado at the wingtip. The diameter of this entrained spiral can be large enough to influence a circle of air 40% larger than the airplanes wingspan.

Upwash and downwash. The wing of a moving airplane influences the air ahead of it similar to the bow wave of a slow-moving boat. Water begins to flow outward around the approaching boat even before the hull gets there. The same thing happens to the air as a wing passes through it, creating an upwash as the air rushes toward the low pressure above the advancing wing.

Now lets go back to those wingtip vortices wrapping around the wing. They impart a downward flow to the air passing over the wing as it leaves the trailing edge. Downwash is the air leaving the wings trailing edge at a different angle than it approached the leading edge. This change in flow direction produces lift, and lift creates induced drag. The higher the AOA, the greater the downwash and the higher the induced drag. 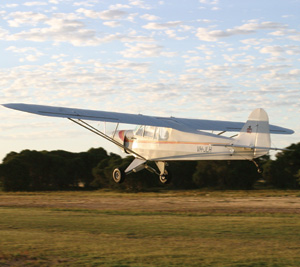 Drag effects. Parasite drag does not play a big role in the ground effect discussion. Its associated with airspeed. Faster speed means more parasite drag. Virtually all ground effect situations involve takeoff or landing (or at least they should), so airspeed is fairly slow and doesn’t change much while the airplane is in ground effect. Parasite drag accounts for only 15% to 20% of an airplanes total drag during takeoff and landing.

Less drag means less power is required. Have you ever neglected to retard the throttle all the way during a landing? Nah, me neither. But if you have, you probably realized it after the plane kept floating well past where you expected to land. It takes a lot less power to keep flying when you have a lot less drag. Entering the round-out with extra airspeed has a similar consequence. With less drag it takes longer to dissipate those extra knots, resulting in a long landing. Or beverages.

I once watched an airplane take off after an inordinately long ground roll. Each time it started to climb, it settled back to about a half wingspan altitude, until the panicked pilot yanked it nose-high to avoid trees without success. He had enough power to fly in the reduced drag of ground effect, but no more.

Lift effects. Unless you have a wing with infinite span, you’ll have wingtip vortices. A wingtip end plate with vertical surfaces extending above and below the wing could inhibit the vortices, but the required size to be effective is often impractical. Too bad, because that vortex inhibition has the same effect as increasing the wings aspect ratio (ratio of the wings span to its average chord). A wing with a higher aspect ratio provides more lift than a lower aspect ratio wing at the same AOA. In ground effect, the vortices are reduced, giving the wing an increase in effective aspect ratio. So a wing in ground effect behaves as if its aspect ratio increases as it gets closer to the runway, generating additional lift with no change in AOA.

Upwash, downwash and wingtip vortex activity vary as the airplane changes speed and height in ground effect, creating air pressure gradients around the plane that could introduce pitot-static errors. If your static source is located in an area of increased local pressure in ground effect, you could see erroneously low airspeed and high altitude indications. Not a big deal during landing when your attention is outside the cockpit in ground effect. You probably rely on your airspeed indicator more during takeoff for line speed checks, abort consideration and rotation speed. Any static pressure influence is short-lived for most airplanes as they continue to accelerate to climb speed while quickly rising out of ground effect.

You’ve already seen why low-wing airplanes tend to experience a greater ground effect than their high-wing counterparts. This is also true for the horizontal tail, which, after all, is nothing more than a smaller wing lifting in the downward direction. The same increase in effective aspect ratio and inhibited horizontal tail tip vortices apply, but the biggest influence is probably the downwash changes. Low tails should see more ground effect than T-tails, particularly for airplanes with a low main wing.

Sucking the gear up in ground effect is a crowd-pleaser for the Blue Angels, but may not be a viable option to improve takeoff performance in a small plane. Aside from the obvious safety compromise, transiting landing gear could actually increase the airplanes drag temporarily. Opening gear doors and changes in interference drag could negatively affect performance as well as pitching moments that you have to compensate for with your less effective elevator in ground effect.

That should be enough surface scratching to explain ground effect basics. While we covered only the major contributors, that will likely suffice to poke a few holes in the air-bubble surfing notion. Next month well put these individual components together as we take another look at ground effect from the pilots perspective.

Paul Dye - January 18, 2019
0
Building an airplane is something that requires not only specific shop skills and experience,...