In Part 1, we talked about how an airplane flying lower than approximately one wingspan above the runway is influenced by rerouted air that alters the planes performance, stability and control characteristics. Now lets see how those ground-induced changes in upwash, downwash, wingtip vortices and pressure gradients translate into what you see from the stick-and-throttle perspective.

It is the elevators job to drive the tail downward to raise the nose enough to increase the wings angle of attack (AOA) and create more lift than weight to solve the takeoff equation. How far you have to pull the stick depends on your rotation speed, trim setting, the relationship between the maingear and center of gravity, airplane geometry and all of those swirlies whose consequence we call ground effect.

A Little Something for You

As the airplane breaks ground, you enjoy the benefits and account for the penalties of flying in ground effect. Below approximately one wingspan the effective aspect ratio increase of the wing means you’re getting more lift for the same AOA than you will outside ground effect. But getting the wheels off the runway does not guarantee you have enough speed to fly away. Lets say some pilot (not you, of course) just performed the perfect soft-field takeoff, and instead of accelerating in ground effect, this pilot attempts an aggressive pitch up to climb attitude. There’s a chance the airplane will just mush back into ground effect, and possibly back onto the surface, due to that loss of effective aspect ratio upon climbing out of ground effect. 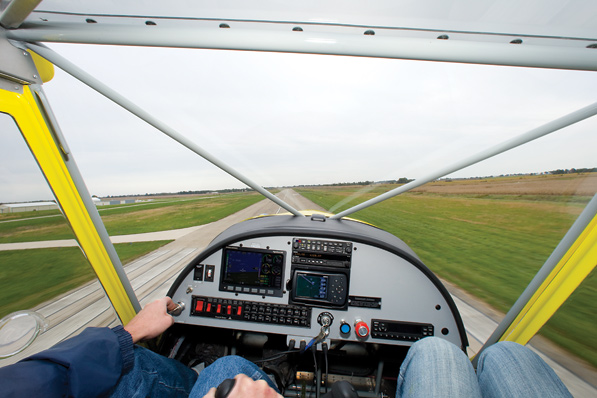 Near the runway, ground effect can have a profound influence on your airplanes handling. How you manage this phenomenon will determine the quality of your landings.

Yes, flying in ground effect seems like an attractive means of maximizing your airplanes initial performance. It could make the difference at a high-density-altitude airport or to haul your trophy buck back home where bragging rights count. Not a good idea. You cant remain in ground effect forever (Caspian Sea Monster excepted), and all that good stuff fades quite rapidly soon after liftoff. As you accelerate, parasite drag increases, and the induced drag advantage of reduced wingtip vortex inhibition diminishes as the AOA reduces with faster airspeed. The inconvenience of getting an earlier start in cooler temperature or locally butchering that buck is much less objectionable than fast-approaching trees as you realize your airplanes current absolute ceiling in ground effect is less than its wingspan.

With the runway falling away, downwash from the wing now has somewhere to go. Consequently, the AOA of your horizontal tail increases as you climb out of ground effect (just after sunrise, with plenty of lodge photos of you and your 10-point). You might have to compensate to avoid the resulting automatic nose-up pitch by relaxing the stick pull as you gain altitude. How much depends on several factors. Assuming you’ve gained sufficient airspeed, aggressively pulling to the climb attitude, you’ll still have to contend with the pitch-up tendency, though you might not notice. A low horizontal tail might provide a more obvious natural pitch-up than a T-tail. Raising the landing gear or flaps as you exit ground effect might provide enough pitching moment to mask the tail AOA change, or it could reinforce it, requiring a more significant compensatory forward stick adjustment.

Then again, a slight pitch-up could be desirable. Leaving ground effect, the wings effective aspect ratio returns to normal, meaning you’ll need to increase its AOA anyway to maintain the same lift. Of course, in a marginally performing airplane, too much pitch-up could result in just enough additional drag to settle the plane back into ground effect. Unnerving, especially if most of the runway is already behind you.

Emerging from ground effect, you can expect some degradation in performance. There’s no runway to impede wingtip vortices or minimize downwash, and that means increased drag from both. Climb rate and acceleration suffer as a result.

What, you never noticed all of these aerodynamics before? Well, thats not really surprising, because so much happens so quickly during takeoff. Pilots are wonderful compensators. That little stick-nudge forward just after takeoff might not be a completely conscious action, but you might be doing it every time. Then again, you might not. It depends on your airplane, the trim setting, your takeoff technique and even the wind. Its all still happening, but it could be masked by a variety of goings-on. 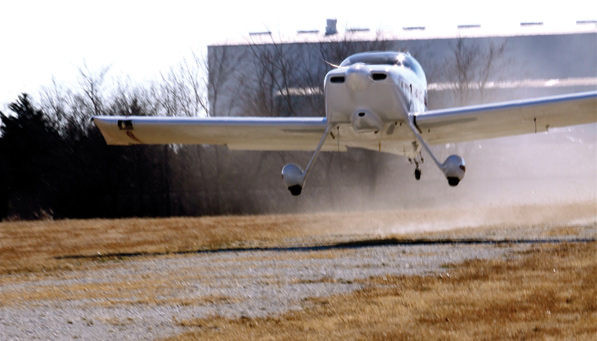 The pitch change in and out of ground effect must be compensated for, and is particularly important during short- and soft-field operations.

The takeoff ground effect progression is reversed during landing. The closer the airplane gets to the runway, the more efficient the wing becomes with its increase in effective aspect ratio and reduction of induced drag. While the horizontal tail also experiences these benefits, it becomes less effective due primarily to the reduced downwash.

You are probably well into your round-out as the airplane begins to experience ground effect. Just as you begin your nailed-it smile, the seemingly perfect round-out transitions to a slight balloon. This might feel like the airplane finally got a good bite of air from the aft stick adjustment you made a couple of seconds earlier. What typically follows is that you relax your pull on the stick just a tad. If your airspeed is sufficient, you get to try it again. If the airspeed has already decayed significantly, you might need to add a little power to soften the landing. And a little is all it will probably take, thanks to the inhibited vortices and resulting reduced power requirement.

As you settle back into ground effect with your new stick pull calibration knowledge, your next flare is likely to be a little less aggressive and your patience extended a bit. Chirp, chirp.

Ever fly with that guy who always keeps a handful of extra knots on the airplane on final approach? Many of us probably trade a few anxiety points for a longer landing by flying faster when warranted, like during gusty conditions. Doing this routinely, however, might not be the best habit to develop. Assuming you’re at idle just prior to landing, all that drag reduction due to ground effect translates into a slower deceleration during the flare. Every knot faster than you should be means either touching down farther down the runway or landing faster than you should. Both result in longer landings. The same thing happens if you leave even just a skosh of power on. Less drag means whatever power you have does a better job at keeping the plane flying in ground effect than outside ground effect. A go-around is almost always a better decision than committing to land long if there’s any question about enough runway ahead.

Takeoffs and landings are probably the most demanding piloting tasks for many of us, complicated by airplane design, approach speed, descent rate, weather conditions and pilot technique. They’re dynamic environments requiring iterative, immediate pilot action throughout. Most pilots are too busy during takeoff and landing to dissect these events into individual ground-effect components. An observer, however, is in a much better position to notice the various cause-and-effect relationships. Next time you find yourself in the right seat, see if you can spot some of them. It could be enlightening.