I know by the time you read this you’ll probably be heading off to Oshkosh, or it might even be over, but here I am, talking about SnF, which happened three months earlier! Unfortunately, that’s one of the challenges of writing for a magazine with long lead times. But on the plus side, you get to enjoy some nice color photos. So, timing aside, I do want to share with you some observations of SnF 2018, as well as touch on some safety items that have been on my mind for a while. 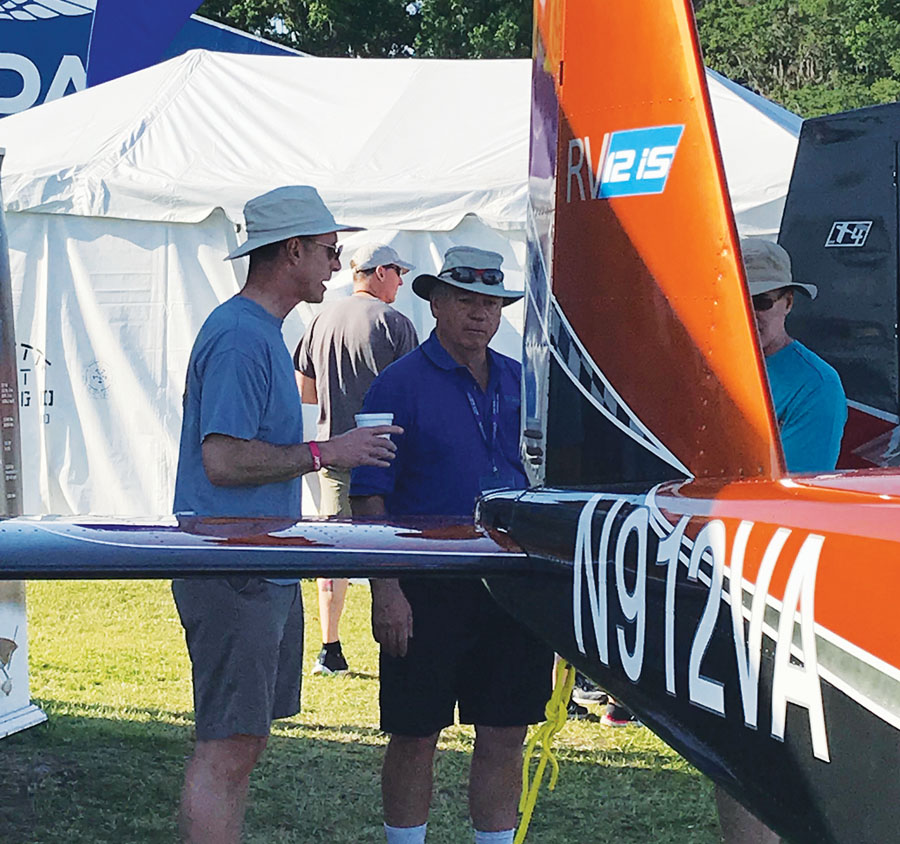 The RV-12iS continues to be a popular kit, and Mitch Lock (dark blue shirt) of Van’s Aircraft enjoys speaking with builders, flyers, and prospective builders about it.

It was pretty busy for me, as this was my first year in the booth all day with the rest of Van’s staff at SnF. Carol went along and was right there with us all day, too.

I also participated in a panel discussion on experimental aircraft in the AOPA tent on Thursday. I’m happy to see that AOPA is giving more coverage to the amateur-built facet of aviation. After all, it is the fastest growing and highest producing segment of general aviation. I also plan to participate in AOPA events this October in Carbondale, Illinois, and Gulf Shores, Alabama, and will be giving more talks on experimental aviation—perhaps at OSH, too!

The most enjoyable part of these events for me (and the Van’s crew) is being able to put names with faces that we speak to on the phones, as well as reacquainting with old friends. Sure, the airplanes are fun and that’s why we are there, but it’s the people that make it truly enjoyable.

It’s a lot of fun explaining to prospective builders how enjoyable it can be to build your own airplane. Sure, it takes work and dedication, but the kits today are very carefully orchestrated to be pretty much an assembly process. Yes, there are a number of tasks that have to be completed to comply with the FAA 51% rule, but you really no longer have to refer to blueprints and try to figure out measurements. The manuals depict a real step-by-step process, not unlike buying and assembling a barbecue grill from Home Depot or furniture from IKEA.

Of course, there’s one big difference: If you stay organized and precisely follow each step, you have an airplane when you check that last step in the manual. How cool is that? There’s really no need to be intimidated today, as there are so many workshops to help get you started with the skills you need, along with online resources, that it’s hard to fail. Honest. The only failures I’ve seen are mostly from those who refuse to ask for help or guidance, or don’t stay focused on building as per the manuals. 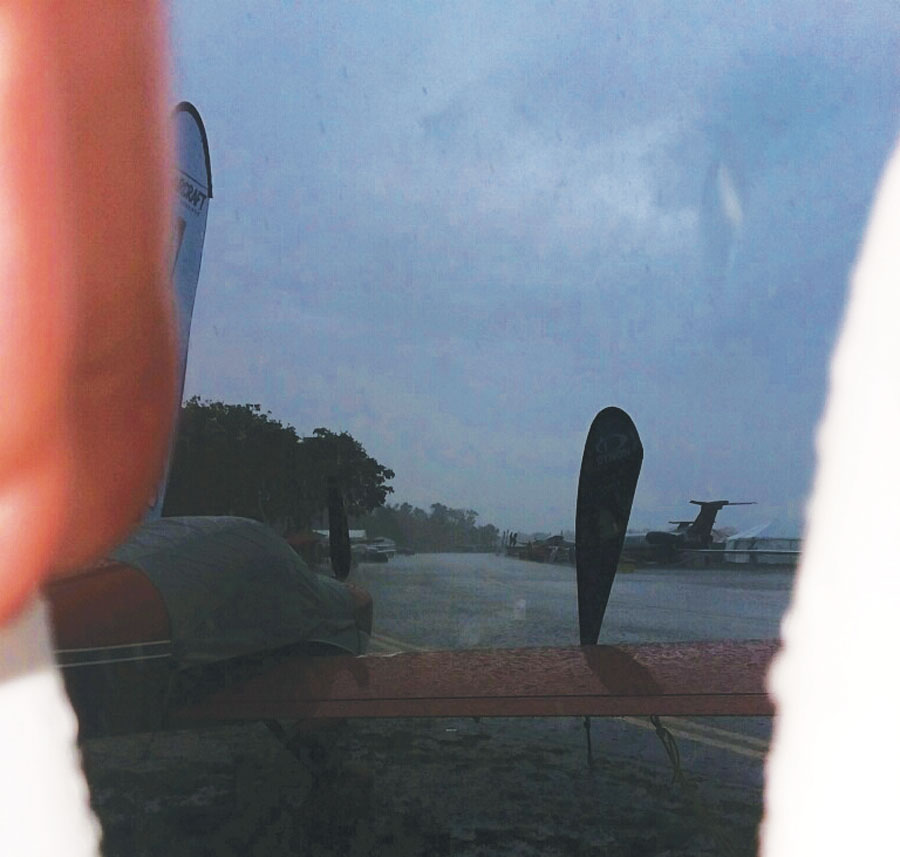 This was the view out of the Van’s booth on opening day. 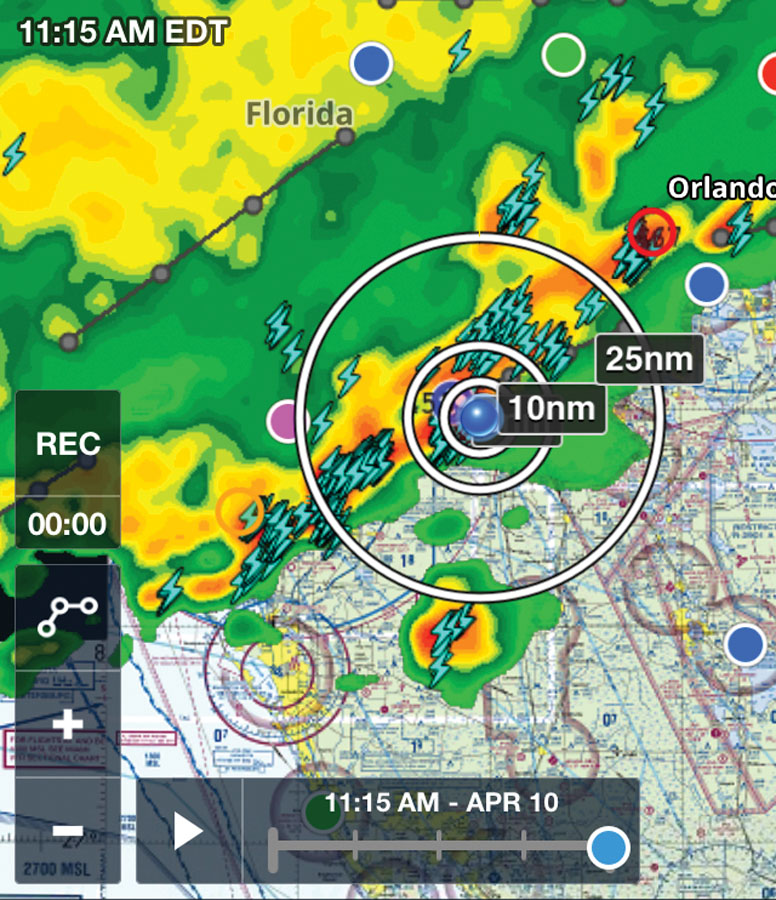 The radar picture on ForeFlight tells the story. We ended up standing in about two inches of water with lightning all around us! Clearly, arrivals were cut off for a day.

With the thousands of questions that get asked during a show week, there are always a couple of memorable ones, and SnF was no exception. The final weekend crowd is usually the non-building public who are there to see the airshow, with the serious builders having come and gone earlier in the week. One gentleman walked up to the Lycoming IO-390 on display and asked if we put them in cars. I politely said “no,” but then turned to Sterling Langrell from Van’s and said, “We do load them in our cars, drive them to the airport, and install them in our airplanes!”

On Sunday, another gentleman asked me if these were homebuilt airplanes. I replied “yes,” and he mentioned how lucky we were that the builder assist centers had taken off and really saved this industry. I really didn’t know how to reply to that one. I guess I should let Wally Anderson know what an impact he’s had by founding Synergy Air.

I mentioned I had a couple of safety items on my mind. The first has to do with service bulletins. I know this one has been argued many times in the past, but I still have heartburn with those who want to argue that SBs are not ADs (airworthiness directives) and, therefore, they are optional. See, we don’t issue ADs against experimental aircraft, at least not that I am aware of. Some of the SBs out there from the various manufacturers have come about because of some serious findings, sometimes even accidents. When I see one that is labeled “before further flight,” it seems pretty serious to me, and perhaps we ought to take a look at it. I hope you agree. 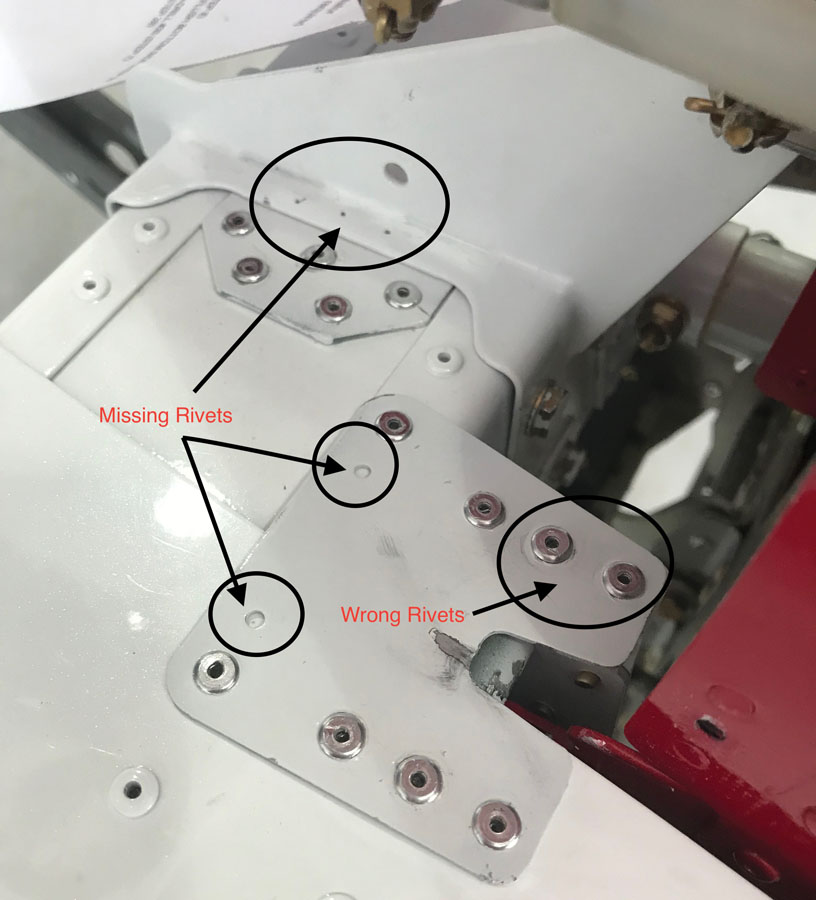 Here you can see the areas that are missing rivets or have incorrect rivets installed. A service bulletin on a primary control surface needs to be done correctly and in a timely manner.

I had to argue with an A&P recently regarding this topic during a prebuy on an RV-12 SLSA. SBs really aren’t optional on SLSAs. His opinion was that they were. Not only that, he elected to perform the SB in his own way, as he decided that the rivet spacing was too close, so he left out 16 of the required rivets and substituted pop rivets for specified driven rivets! I wasn’t getting anywhere with him until I pointed out that since he made an entry in the logbook that the SB was complied with, it could be construed as logbook falsification. He finally got the message and decided to redo the service bulletin. In this particular case, I was glad I stuck to my guns, as upon disassembly of the stabilator, the workmanship on the SB was so bad, it was determined that replacement of the stabilator would be the best option.

I’ve said this many times before and I’ll say it again: I don’t believe any of us in the field should think we are smarter or more experienced than the factories or service centers that see many examples, sometimes thousands of them, such as in propeller or engine overhaul facilities. They probably have a good reason to issue an SB (lawyers aside), and we should probably pay attention. After all, we do sign off on the condition inspection that the airplane is in a condition for safe operation. I think our passengers are counting on that as well. While I am not a lawyer, I would bet a jury might agree in the case of an accident.

I’ve also written in this column about the dangers of low-level acrobatics. I heard a new one the other day that gave me shudders. A local pilot was out flying his RV-12 SLSA and stated that he had been doing aerobatics in it! Another very experienced pilot on the field, also an RV-12 owner, took him to task for it, to no avail. The G limits on the RV-12 are +4/-2 G’s, and the published POH states that aerobatic maneuvers are prohibited. The main reason this is a concern is from the aspect of fatigue. The aircraft is designed around a number of gust cycles to -2 G’s or +4 G’s. Performing aerobatics ramps up those cycles significantly. Perhaps the pilot is capable of staying within the limits. Perhaps. But he truly is setting a horrible example for others—so sad as I fear we will read about him one day, and that won’t be fun.

Again, if you were one of the ones who stopped by at SnF, I say thanks! I look forward to seeing some of the rest of you at upcoming events as the year goes on!

Vic Syracuse is a Commercial Pilot, CFII with ASMEL/ASES ratings, an A&P/IA, DAR, and EAA Technical Advisor and Flight Counselor. Passionately involved in aviation for over 40 years, he has built 11 aircraft and logged over 8700 hours in 72 different kinds of aircraft. Vic volunteers as a Young Eagle pilot and Angel Flight pilot. He chairs the EAA Homebuilt Council and is a member of EAA’s Board of Directors. He also has his own sport aviation business called Base Leg Aviation.

Kitplanes - May 20, 2009
0
CubCrafters ships CarbonCub kits; Forward Visions EVS-100 system will be available in RotorWay Experimental/Amateur-Built helicopters; and MotoPOD will produce cargo pods to haul a street-legal motorcycle underneath the RV-10. Edited by Mary Bernard.

Avionics Bootcamp: ADS-B For Canada and Beyond

Larry Anglisano - October 25, 2019
1
If you’ve equipped your plane for the U.S. ADS-B mandate, there’s a good chance it won’t work in other countries, including Canada.