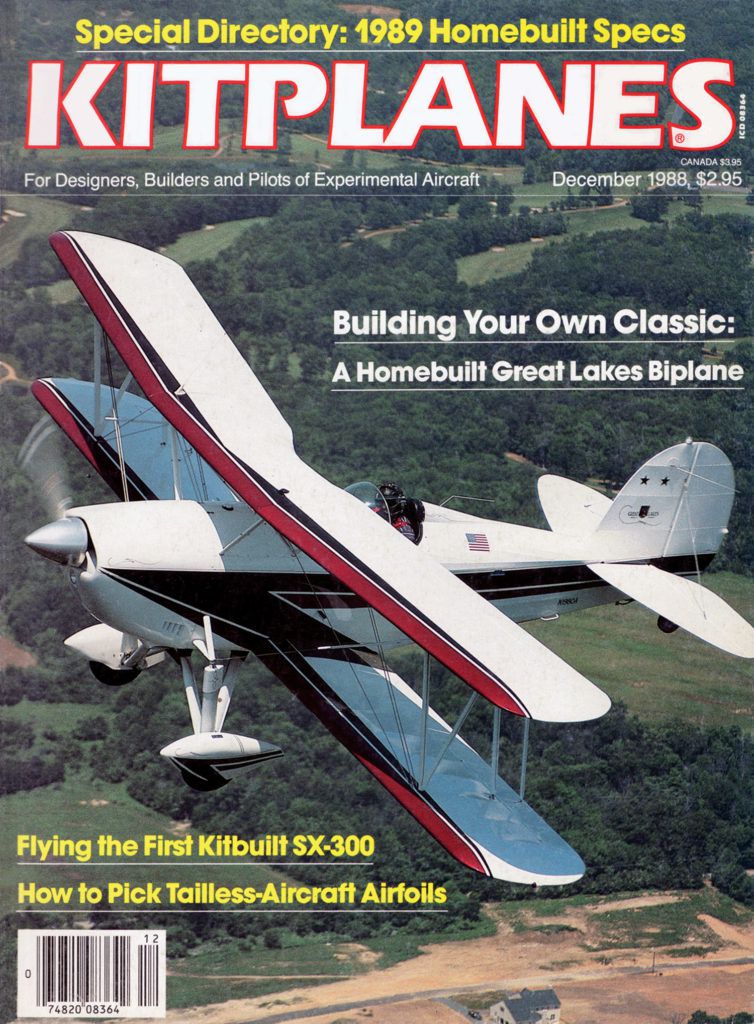 A Great Lakes biplane was on our December 1988 cover, and the issue contained our directory of all the homebuilts available for 1989—34 pages of microscopically small type and no photos that included a supplier directory. It’s interesting to note that we had Cirrus as a kit maker then; Lancair was known as Neico Aviation in Santa Paula, California; RANS was there with four models (Coyote, S-9, S-10 and our current cover story, the S-7); and Zenith (known as Zenair) had eight models including the MC-15 Cricket and the CH-100 Mono-Z.

In this issue we celebrated the first customer Swearingen SX-300 flying. Dan Wright’s 300 first flight started at the Santa Ynez, California, airport—just a 2800-foot strip, adequate but only just for the SX—and ended at the Santa Maria airport, where he would continue his flight testing. His registration, N388MW, reflected his desire to eventually upgrade to a 388-hp turbocharged engine and achieve 388 mph at 25,000 feet. Wright said the all-metal, retractable-gear speedster took 6700 hours to complete.

Dragonfly builder Dean Richards addressed one of the big challenges in building. No, not the construction part or reading plans or paying for it all—answering questions “from the curious.” “My favorite [question] is the perennial, ‘Do you think it’ll fly?’ This question issues from the mouths of dear friends as well as from passing strangers who pause just outside the garage door squinting into the darkness.” His typical answers? “No, I’m building the world’s most expensive lawn ornament.” “Not without me in it, I hope.” “Actually, I never planned on flying it. I think I’ll just go down to the airport and taxi it around on weekends.” You have to appreciate a builder with a sense of humor.

Technology was emerging for general aviation and homebuilts alike. II Morrow had a full-page ad for its 618 “Super Bandit” loran. (See, kids, there was a time before GPS.) II Morrow, a play on the word “tomorrow,” had already been purchased by United Parcel Service and would become simply Apollo in the following years before being purchased by Garmin. KSA had an ad for its “shock blocker,” a multi-cylinder EGT gauge with a single needle. The pilot had to switch through each cylinder to see what was happening. An ad for the Mustang II promised “no jigs or machining…simple durable metal construction…9G structure” for a kit price of less than $5500.

Amy Laboda - May 17, 2013
0
Even when built from the same kit, no two aircraft are exactly the same—that’s why you need a builder’s book. By Amy Laboda.