NX218V may be a record for the project taking the longest to be completed. John Thorp sold plans No. 45 to Joseph Hennessey of Seattle, Washington, in 1962. Hennessey later returned the plans to Thorp for a refund. John subsequently sold the plans to Dr. Rod Sellers, a dentist from Garland, Texas, in 1974. Ken Morgan bought the project in 1975 and worked on it for many years. Ken sold the project to Charles O’Neil in Ft. Worth. It gathered dust until I purchased it around 1990.

I worked on it sporadically during the years we lived at Pecan Plantation in Texas. I got serious about finishing it after retiring to Arkansas in mid 1992. I have another T-18 (N118GG, plans No. 949) that I have flown nearly 2500 hours since completion in 1980. The new one is nearly identical. Both have O-360s with 68-80 Aymar-Demuth wood props. Both have VFR panels. Both have TruTrak autopilots, but the new one has altitude hold. The new one incorporates a removable floorboard that makes servicing the rudder pedals and getting to the back of the instrument panel easier for a fat old man. It also has electric flaps which eliminates the flap handle on the tunnel between the seats. The rudder cables were routed outboard instead of through the center tunnel. That permits a rounded center tunnel which gives more hip room for fat old men. Both are painted identically. First flight was November 6, 2006. 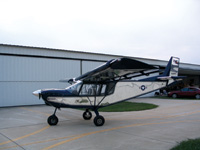 N128DC finally flew for the first time on Monday, November 5, 2007. This has been a seven-year journey. I have enjoyed the building process for the most part, though there were those frustrating times when you wonder if you can ever figure it out—if you could ever finish something on this scale. My wife, Letha, while having a complete aversion to things mechanical, put her whole support, both moral and financial, behind my dream. Even though I was a regular attendee at Oshkosh for more than 30 years, I had absolutely no appreciation for this thing called airplane building. I couldn’t conceive that in order to build an airplane, you in fact have to build it three or four times and take it apart again before you can say it is done. I couldn’t understand the fact that you would build a part two or three times and still throw it away. After 2500 hours of which 110 or so were polishing hours, I almost don’t remember a time when I have not been working on this airplane. Now that the build is behind me, it doesn’t seem like such a long time. The frustrations do not seem so large, and the job has been incredibly worthwhile. The engine is a 180-hp Mattituck (ECI) TMX-360, and I can’t say enough good things about the engine and company support over the years. Thanks to Bob Stewart, who was the tech counselor, and to Bob Lynch, our chapter flight advisor. He offered much advice and many parts and tools over the years.

Submissions to “Completions” should include a typed, double-spaced description (a few paragraphs only—250 words maximum) of the project and the finished aircraft. Also include a good color photograph (prints or 35mm slides are acceptable) of the aircraft that we may keep. Please include a daytime phone number where we can contact you if necessary. Also indicate whether we may publish your address in case other builders would like to contact you. Send submissions to: Completions, c/o KITPLANES® Magazine, 203 Argonne Ave., Suite B105, Long Beach, CA 90803. Digital submissions are also acceptable. Send text and photos to editorial@kitplanes.com with a subject line of “Completions.” Photos must be high-resolution—300 dpi at a 3 x 5 print size is the minimum requirement.

Paul Dye - March 20, 2012
0
Paul Dye explains how to achieve unlike (or dissimilar) redundancy on the various systems in your homebuilt.