I could have kicked myself. Punching a hole into my RV-7A horizontal stabilizer skin where a hole didn’t belong—how careless of me! I knew it was my fault, although it would have been easy to blame the F-22 demonstration pilot practicing just outside my door.

I was in my shop, a carport/basement beneath my officers’ quarters (aka “house”) at Langley Air Force Base, dimpling my horizontal stabilizer skin with my DRDT-2. Ah, the DRDT-2…that’s another one of those great tools that I love because it makes short work out of dimpling large sheets of Alclad. My shop door faced north, directly toward the center of Langley’s airfield environment only a quarter of a mile away, giving me a great view of the F-22 demo team’s practice sortie.

I’m cruising through the dimple process when the Raptor roared into the vertical and “hung on the blades” midair, blasting the sound of freedom. Mindlessly, I kept one eye locked onto the dimpling job, but I just couldn’t help but divide my attention with the airshow outside. Punch!

I pressed the DRDT-2 handle down with the dimple nipple not quite aligned with the rivet hole, making a perfectly dimpled hole right next to where it should be, but precisely where it didn’t belong. Insert Spock’s colorful metaphor here.

How could I have pulled this bonehead maneuver?

Distraction: The Most Basic Human Factor

Remember the woman in the red dress in the movie, The Matrix? Our hero Neo was undergoing his training under Morpheus, who used the lovely lady to distract Neo’s attention long enough to introduce him to the dangerous agents. As an aviation safety pro, I love that movie scene, not only because she was quite easy on the eyes, but because the scene graphically illustrates a distraction’s hidden hazards at critical moments. 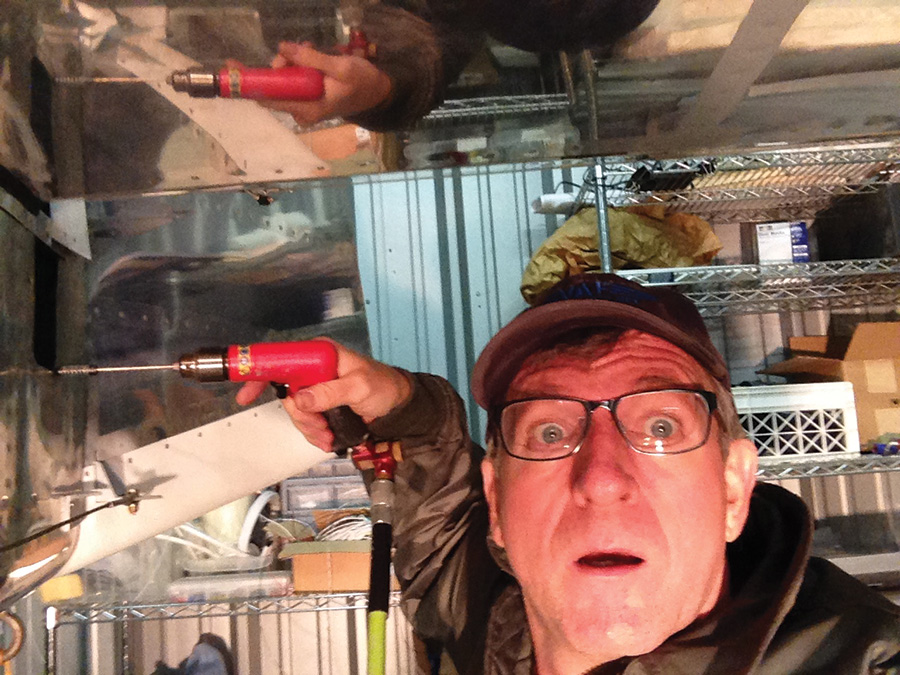 Air Force mishap investigators assign distraction to an accident’s list of factors when the individual suffers an interruption of attention, or inappropriate redirection of attention, by an environmental cue or mental process that degrades performance. In other words, something took their eye off the ball. In the Department of Defense Human Factors Analysis and Classification System (DoD HFACS), distraction falls under the Cognitive Factors category of mishap human factors if cognitive or attention management conditions affect the perception or performance of individuals and result in human error or an unsafe situation.

I buy that completely because that red dress definitely impacts Neo’s attention management. “Are you listening to me, Neo? Or were you looking at the woman in the red dress?” Cue the agent with the giant pistol.

Any interruption to an established task flow constitutes a distraction. One cold January day in Florida (they do happen, I’m told…but don’t let that distract you), an RV-6A pilot was only a few miles out from his home ‘drome, knocking out his landing checklist. However, several ATC vectors and his airspeed management efforts distracted him so much that he missed the checklist step for engaging the carburetor heat. His ILS approach went well until about 1/3 mile and 200 feet agl, when the engine suddenly stopped producing power. He momentarily tried switching fuel tanks, then concentrated on flying a successful dead-stick landing. Thankfully, he and his passenger walked away from the crash.

FAA investigators found clean fuel filters, blue fuel throughout the lines, and no problems with the fuel system. However, weather observations at the time of the mishap showed conditions conducive to carburetor icing. The pilot confirmed to investigators that he had not turned on carb heat for the approach, although he would have normally. The NTSB assigned the probable cause(s) to the pilot’s failure to use carburetor heat in conditions conducive to carburetor icing, which resulted in loss of engine power and collision with trees and ground during the resultant forced landing. Although the NTSB doesn’t specifically cite distraction as a factor, the report’s mention of ATC vectors and airspeed tasks represent classic distractors to his checklist efforts. 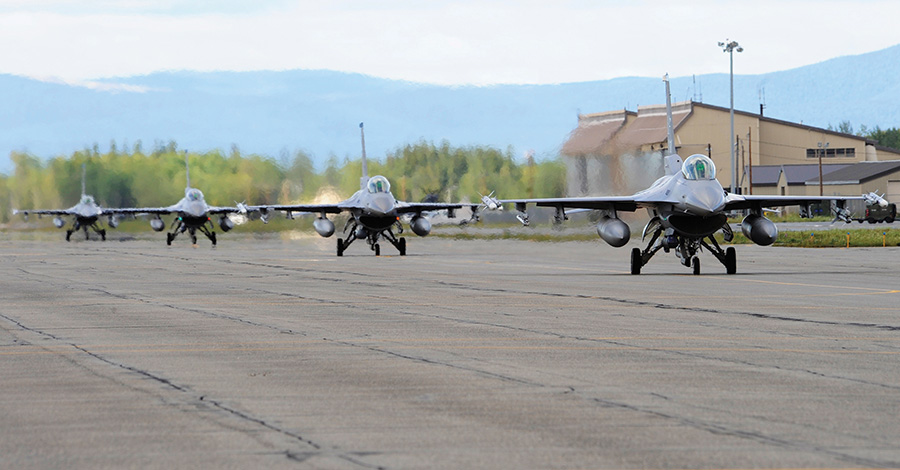 Elephant Walk—an F-16 four-ship taxis toward the runway. In a similar four-ship, the number 4 wingman got distracted while typing information into his aircraft computers and taxied into his element leader’s aircraft. (Photo courtesy of U.S. Air Force)

I know—this is an aviation magazine, so bear with me while I set this up. As of this writing, 44 states have laws of some type that prohibit texting while driving. Does the same restriction exist for aircraft? It ought to, if it doesn’t already exist in our standard operating procedures.

In Korea a few years back, a four-ship of USAF F-16s had started engines and were taxiing their elephant walk out to the runway. Per normal operations, they stopped at a spot so an airman could run an electronic check of their radar gear. The flight lead stopped in the parking spot, and number 2 and number 3 stopped behind him. However, pilot number 4 didn’t notice that number 3 had stopped until it was far too late, and he taxied his jet into number 3’s tail, damaging both fighters. Nobody was injured.

In a nutshell, the Air Force Accident Investigation Board found that the number 4 pilot was…well, texting and driving. Those are my words, not the Board’s, but the parallel is inescapable. While he was taxiing, the number 4 pilot was accomplishing additional aircraft system checks and typing information into his ship’s computers rather than concentrating on the taxi task at hand. He suffered a breakdown in his visual scan, failing to properly monitor his aircraft position relative to the aircraft in front of him. The Board listed several human factors including task misprioritization, channelized attention, and distraction.

Now, I have two really slick 10-inch Dynon SkyView EFIS screens waiting for their chance to dazzle me on my RV-7A’s first flights. As I consider this F-16 accident, I can’t help but think: There, but by the grace of God, go I. In the spirit of the sterile cockpit, I must set myself some standard operating procedural rules regarding when I will (and will not) go heads-down to type stuff into my SkyView. The distraction hazard is clearly there—time to devise ways to manage it. 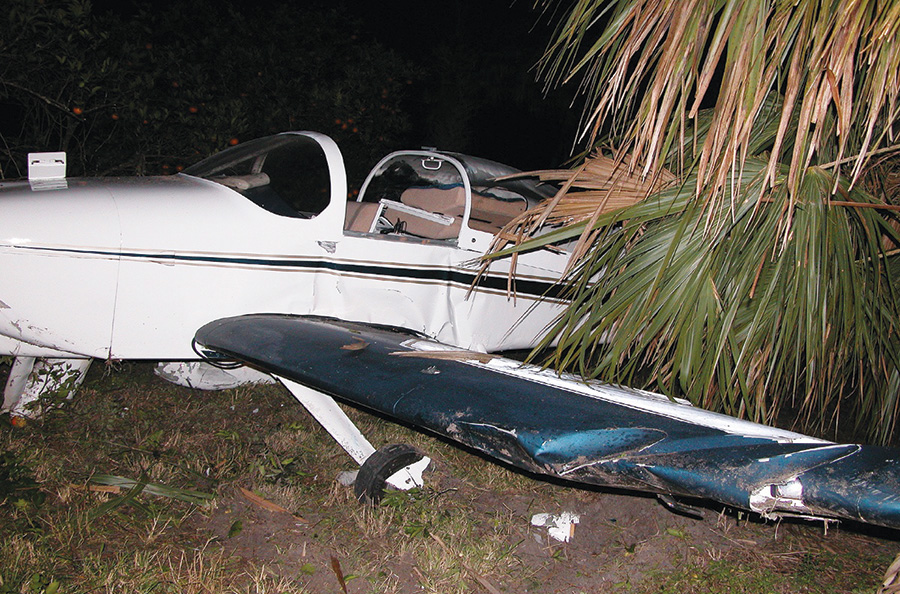 Aftermath of an RV-6A lost to distraction. The engine failed in the pattern due to carburetor ice when the pilot forgot the carb heat. ATC vectors interrupted his checklist flow.

Distractions and the Knock-It-Off Call

A few months ago you and I hangar-talked the knock-it-off call. In a nutshell, if you’re doing something, and it isn’t going right, just stop doing it…call and execute a knock-it-off. Distractions are tailor-made for the knock-it-off.

In another Experimental aircraft accident, the pilot was on downwind to land on a 4,300-foot runway when he noticed he couldn’t lift the flap handle beyond the half-flap setting. While still on downwind investigating the problem, he found that the seat belt had wrapped around the flap handle, gumming up the motion. He released his seat belt to free the flap handle; however, now distracted by the seat belt, he had dropped his airspeed control out of his crosscheck.

On his downwind-to-final turn, the RV-6A was 15 mph fast and high, but the pilot figured the 4,300-foot runway was long enough to fix it, so he proceeded with the approach. He leveled into the flare fast, but the airplane landed hard and bounced three times. The A-model RV’s nosewheel folded on the third bounce, and the airplane nosed over. In his final causal determination, the NTSB investigator said that the pilot’s diverted attention (distraction) contributed to his improper flare and his failure to recover from the bounced landing.

Once you notice you have somehow diverted your attention onto anything other than the task or checklist at hand, you really should stop, step back, and reset the activity. You know…call a knock-it-off. That applies both in the air, in the hangar, and in the shop. Did you forget to slip the shrink tube onto the wire before crimping the terminal connector? Did you remember to sand the surface of that fairing before mixing and applying the flox and epoxy? Where is your tow bar; still on the nose/tailwheel?

So, as for me and my stabilizer skin, I carefully flattened out the dimple on that bad hole and redrilled it to #40 to remove any edge crack. I measured its edge distance from the correct hole: It’s good, well enough away to avoid a crack. After dimpling the correct hole, then riveting and completing the stab, I filled the bad hole with epoxy sealant to (hopefully) hide my mistake once it’s painted.

However, I also learned that there is definitely such a thing as “a bad time” to work on the airplane. Since distraction is such a risky endeavor even to kitbuilding, I now manage that risk by never building when some overwhelming distraction is present. Building—and flying—an aircraft requires dedicated mental attention. If something prevents me from concentrating completely on my work, then the work needs to stop unti…

….sorry. My wife is calling me…

Ed Wischmeyer - July 6, 2010
0
If you’re looking for an economical way to get in the air and your stick-and-rudder skills are sharp, the Breese 2 may be the way to go. By Ed Wischmeyer.

Vic Syracuse - April 17, 2022
0
Some gascolators have internal O-rings that should be checked for deformation regularly. This was...