This never ceases to amaze me: Im speaking at a forum, and guys come up to me afterward, and no matter what the topic I was speaking on, they want to know just one thing: How do I get my wife, girlfriend, significant other to want to go flying in my new airplane with me? Even more amazing, some will ask me how they can find a person to hitch up with who will be guaranteed to love flying, and especially flying in an aircraft theyve built on their own? I could be speaking about new engine technologies and flying efficiently, or preparing for extended over-water flights-it does not matter. There are always a few of these questions.

Frank Schooley with his daughter and helper, Kate, in front of his Sonex project, which was built in a one-car garage.

It leads me to believe (and Ive done no scientific study, so don’t even argue with me because I cannot defend my opinions that way) that there’s a problem in Experimental aviation. People are taking on projects and building aircraft, and these projects are driving wedges between them and their families and, for a few, impeding their happiness.

Agh! I can here the editors screaming already. How can you write in this magazine that a kit aircraft project breeds unhappiness? [Actually, we didn’t say Agh…-Ed.] Well, because in certain situations, more than we care to admit, it is true. Lets face it: People who build aircraft successfully tend to be focused individuals with an eye for detail and a good amount of what Ill call, for lack of a nicer way to put it, stick-to-it-ness. They obsess over details and thrill in the little victories of fabrication and assembly. The perfect weld on a piece of steel tubing is cause for celebration. A final sanding and application of primer coat makes them giddy (well, that could be the chemicals, but go along with me here). Shiny flat-packed aluminum with scores of CNC prepunched holes that Cleco together perfectly raises goosebumps every time.

The Closer You Get…

The more the project comes together, the more exciting it becomes to the builder, and the more exciting the projects become, the less often these individuals look outside of their projects for anything at all. In fact, the further these builders get into the project, the more convinced they often become that they are the only hands that should touch it, short of some occasional assistance from another experienced builder or an A&P mechanic. Sometimes they even forget to talk about the project around the supper table-or forget to come in for supper altogether, because they are too engrossed in a complicated part of the build that came upon them suddenly. They even miss holiday suppers. Really. And these projects often take years to complete-at least for the average Joe with a real job to support his flying/building habits and, um, his family.

Listen, it is hard for me, the owner of two flying kit aircraft, to beat up on these poor souls for getting their jollies from building. It is fun, even thrilling, to see an aircraft come together from the work of your own hands, and to know it will fly-heck, you will fly it-one day.

Unfortunately, people who exhibit the perfect traits for successfully building a plane also exhibit the same traits that are all too often the cause of what we call aviation-induced divorce syndrome. The best possible outcome for some of these individuals is that they come up for air, one of their proudest accomplishments complete, with absolutely no one to show it off to or take flying. Even if the builder is still hooked to a spouse and family unit, by the time the aircraft is complete the family members pretty much feel like they have been shut out of the process for so long that they don’t want to be a part of it now. Or not understanding the process, these family members perceive the kit project as possibly unsafe. A worse scenario is that the builder was originally part of a family unit, but somewhere during the build the family, feeling neglected, opted out and took half the accumulated family assets with them on the way out the door, leaving the builder with just his kit and little means with which to fly it. Not happy.

I get these puzzled souls appealing to me so often (ostensibly because I am female, I like builders , and I fly) that I feel it is critical to talk about how to avoid their sad fate. It is simple, really. Just make sure you include your family, girlfriend or significant other in the project from its very conception.

Hey, Im not alone in this revelation. On the KITPLANES web site you’ll find a wonderful article called First Time Builders, written by Dave Martin in 2004, which lists 10 key elements for increasing the odds that a first-time builder will complete the project and fly a kit. Number eight on the list boldly states that builders need family support, including help with construction. Martin makes the simple point that his research shows kit aircraft get completed more often when the builders family is as excited, or involved, as the builder. For some this manifests as actually sharing the project with the family, as Yuma, Arizona, builder Bob Noll did with his wife and daughter when building the RV-9A that was deemed the honorary 30,000th homebuilt aircraft certified by the FAA. In the process of the build his daughter Katrina learned to fly with the Civil Air Patrol, so that when the project was complete she could fly it, too.

Ric and Bobbi Lasher argue over who really decided to purchase their GlaStar kit, but Ric, the engineer/physicist, is pretty sure the final decision was his wife, Bobbis. Though Ric started out as the principal builder, with some help from friends, Bobbi was right in there, too. When it was all done, both learned to fly it.

Frank Schooley, on the other hand, talked himself blue in the face before his wife, Doreen, agreed that they would spend a healthy chunk of change to pick up a partially built Sonex project from Texas and bring it back to Florida for Frank to complete in their one-car garage. Doreen wiggled around it for a couple of years to get to her washer and dryer, and Frank definitely kept her in the loop about what he was doing (and spending on it), even if she wasn’t so enthusiastic. He did get help from their daughter, Kate, a budding engineer. In the end the project was assembled and painted and sits at the couples business, a cabinetry shop, waiting for a lift to the nearest airport. Doreens skeptical that shell ever fly in it, but then shes quick to admit she likes the paint job, she sewed some of the interior, and it is cute. Diagnosis: hope. It may help that Kate is off to college some 3.5 hours away (just 1.5 hours in the Sonex).

My story you probably know. I didn’t build with my husband because he already had most of the skills he needed to build, and I didn’t. He didn’t want to slow down the process for me to catch up. Yeah, that annoyed me. But so did being left as the sole caregiver to an infant and a toddler for nearly nine months when our first project, a Kitfox IV, was completed. I swore, we swore, once we were communicating again (after I was flying the new airplane) that we wouldn’t let that happen again.

Fourteen years later I believe I took out the credit card and called Vans Aircraft to order the tail kit for our RV-10. My name is on all the bills, anyhow, so I hope thats what happened. I still did not build this airplane, but I did help a whole lot more. I bucked rivets-some in areas that my considerably larger husband simply could not get to. I held nuts in place with heavy wrenches while he tightened bolts. I helped to place and remove fiberglass parts again and again. Glued windows in place. And I documented it all with my camera, so that wed have a visual record of the entire process. I contracted with the paint-scheme designer, and consulted on the interior and exterior colors-all parts of the build that I am good at. When it was time to fire up the engine and go fly, I made sure I was current and could be part of the fly-off process.

Im a builders spouse, but this time around Im not an angry, alienated one. You don’t have to let that happen. We didn’t, the Nolls didn’t, and neither did the Lashers. Were all happy kit-aircraft owners, with family members who fly with us. Best of all, we aren’t alone.

Amy Laboda has taught students how to fly in California, Texas, New York and Florida. Shes towed gliders, flown ultralights, wrestled with aerobatics and even dabbled in skydiving. She holds an Airline Transport Pilot rating, multiengine and single-engine flight instructor ratings, as well as glider and rotorcraft (gyroplane) ratings. Shes helped with the build up of her Kitfox IV and RV-10. 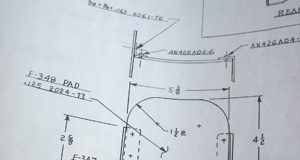 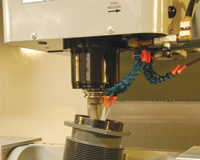 Tom Wilson - February 16, 2009
0
The art of porting cylinder heads, whether by hand or by CNC machine, is a valuable part of blueprinting detailed engine builds or overhauls, and surprisingly subtle changes can determine how efficiently the engine will breathe.