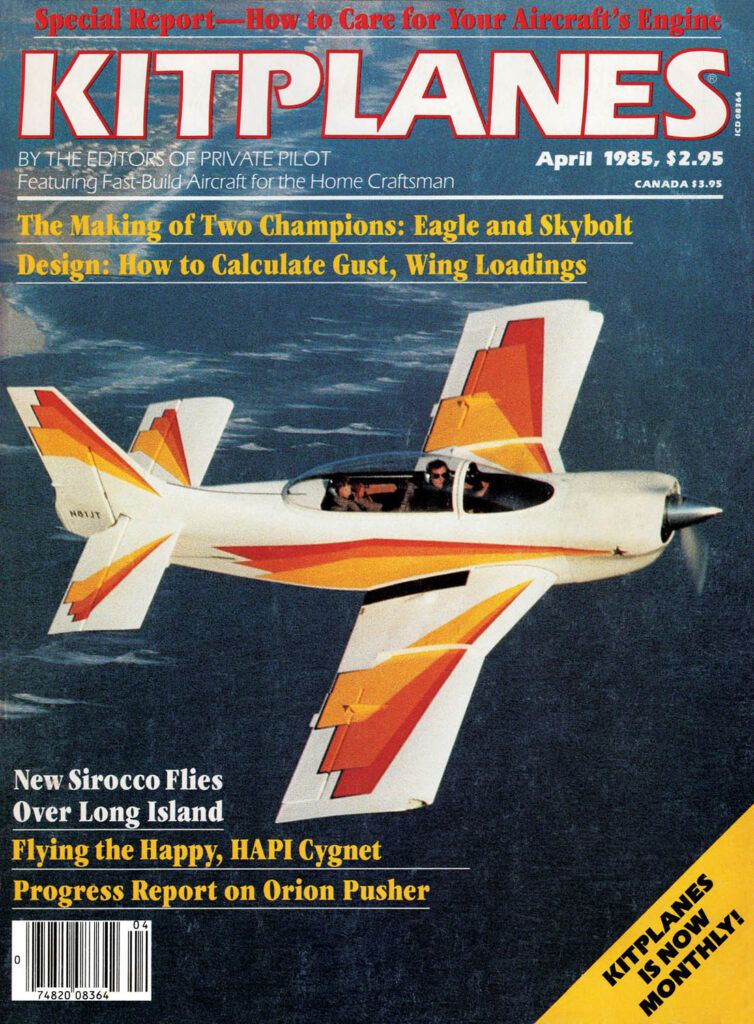 Built by John Tumilowicz, the Sirocco on our April 1985 cover was the fifth design by Marcel Jurca. Candidly, author Howard Levy related that, “Back in 1970, when Tumilowicz decided to try his hand at building an airplane, he chose the Jurca Sirocco. He thought it would be one of the easier homebuilts to start with. It turned out he was wrong.” He finished the predominantly wood airplane in 7-1/2 years working 15 hours a week. Powered by a 200-hp Lycoming IO-360, the Sirocco cruised at 178 mph with a stall between 67 and 69 mph. Jurca, who died in 2001, has more than 35 designs to his credit.

Author Don Downie had a four-page feature on the G-802 Orion. Designed in France by Jean Grinvalds, the G-802 in our issue represented a development of the 801, which at the time had some 30 examples flying in Europe. Powered by a 180-hp Lycoming, the Orion featured four seats, retractable tricycle landing gear, full composite construction and a pusher propeller. Claimed cruise speed was 186 mph. Downie described the Orion as “low slung,” which helps distinguish it from the taller, thicker Prescott Pusher and the much larger Cirrus VK-30 that would come later.

Mark Brown’s Star-Lite was the subject of another feature in this issue. Author Downie noted that the Star-Lite had already won Outstanding New Design at Oshkosh 1983. “The Star-Lite is a true ultralight, weighing just 230 pounds empty; however, its performance figures boost it out of this category. Mark Brown has done his homework well. The fuselage kit has a sandwich composite shell with wing fillets and vertical stabilizer already molded in.” Downie noted that the Star-Lite had already been through a few different engines, from a two-cylinder Kawasaki to a single-cylinder Zenoah, followed by the Rotax 277 and finally the Rotax 447. Brown, responding to the criticism that two-stroke engines weren’t as reliable as four-strokes, noted that the use of an EGT gauge and slightly rich mixtures would help the 447’s longevity. He also noted the Star-Lite cruised at 120 mph on 1.2 gph of car gas. Of course, the Star-Lite would, in time, become the two-seat Pulsar that really hit its stride when the XP model, featuring the 912 Rotax, came out.

Editor Dennis Shattuck made a heartfelt case in his editorial that there should be a homebuilt-centric airshow in Southern California. “Oshkosh has its own Oshkosh; Florida and the southeastern states have their Sun ’n Fun; Texas has its annual Kerrville regional fly-in and the Pacific Northwest has an annual big do for homebuilders at Arlington, Washington. Arizonans annually gather for the Copperstate fly-in. Where, might we ask, is the big show for homebuilt/antique/warbird/aerobatics for the far western states?” He noted that several airports had tried their hand at presenting airshows, with some small (like Corona, California) and some that got so big (at nearby Chino) that there weren’t enough volunteers. He concluded by wondering if Watsonville or Merced in California might not be a good place for a permanent show. History records that regional airshows had become increasingly less relevant as Oshkosh (eventually renamed AirVenture) grew and the regionals struggled for audience and exhibitors.

Also inside this issue were stories on the updated Christen Eagle II and the long-running Skybolt. And if you didn’t want the wing at the top and the bottom, there was a feature on the mid-wing Cygnet. Finally, while this was our first true monthly issue, it was still mainly black and white. A handful of color pages are to be found inside—and somewhat haphazardly. Homebuilding was already well established and getting stronger, but at KITPLANES® we were still kind of figuring it out.

Kitplanes - December 16, 2007
0
When you join two halves of a flat aviation engine together, they often weep between the starter and the alternator. Not only is this unsightly, its wasteful and makes completing an overhaul more cumbersome than need be. Enter Ly-Con, whose groovy O-ring process promises to stop leaks before they start.

Dick Starks - October 14, 2011
0
Dick Starks and the members of The Kansas City Dawn Patrol head out to take part in the Annual Salute to Veterans Airshow in Columbia, Missouri.