The bottom line is: Yes. OK, if you haven’t been following the saga of engine cooling for the big-bore Lycomings (namely the Lycoming IO-540s) under the hood of most Van’s Aircraft RV-10s, then I’ll give you the quick synopsis. Just about everyone has some sort of issue to tweak. Yes, even those RV-10 builders who have stuck with the stock Van’s cowling and baffling have been, frankly, baffled by the seemingly gargantuan task of correctly ducting air over the engine, through the intricate fins of six cylinders, down, and out the bottom of the cowling. 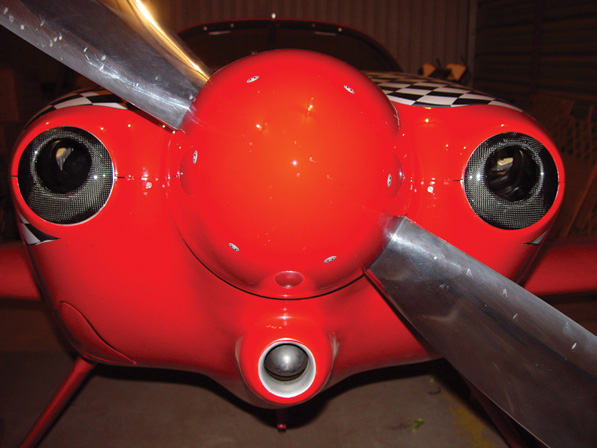 An RV with adjustable inlets. Well, ground-adjustable, anyhow. The inserts can be removed with a little trouble for hot-temperature environments, and replaced to narrow the air inlet openings in cooler temps. The cowl is a Sam James Holy Cowl, and the inlet innovation is homegrown.

Some builders have had success using louvers, such as the ones you’ll find on a Cessna 182, which increase the suction on the bottom of the cowling to pull air through. Others have created an adjustable cowl flap (an old-school fix found on numerous aircraft). 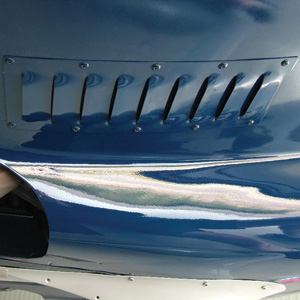 An example of louvers appended to the bottom of an RV-10 cowling to help draw out the hot air from the lower cowl.

Some just deny that it’s an issue. A recent perusing of the RV-10 builders’ forums noted several owner/operators who are managing to keep cylinder-head temperatures under 400 by simply throttling back to 55% power (23 inches of manifold pressure, 2300 rpm) and flying at 150 knots. Another says, "Oh, I just reduce power in the climb and push the nose over, giving up climb performance [and potentially, safety] to keep the engine cool." Well, we didn’t build our airplane to fly at 150 knots or climb at 500 feet per minute. We built it to fly 170 knots and climb away from hazards at a brisk 1200 fpm. And we are sure it can-all day, if we balance the airflow inside the cowling.

Again, pardon the review if you have already read this, but we opted to go with non-stock equipment on our cowling; a fiberglass plenum bolts to the top of the engine instead of silicon baffling. The plenum receives air through two circular air intake ducts behind the propeller and squeezes it, Bernoulli-style, so that the air accelerates across the cylinders and between their fins, carrying the heat back, down and out an outflow "gate" at the back and bottom of the engine area, forward of the firewall.

Our plenum has not been a perfect solution, until now. With the help of the manufacturer, Sam James, we’ve refined our installation until, finally, it works. It wasn’t easy. 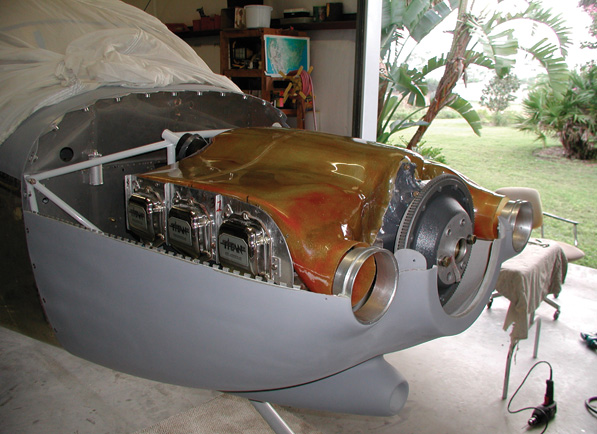 Here is the original configuration with 4-inch intakes. 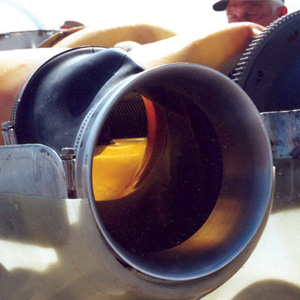 Round air intakes come in many sizes.

In the spring we heard from James about our issues. He suggested we first try a new plenum, which he’d refined, specifically enlarging the outflow "gate." We agreed. He also came to our shop, as he has done for other clients, and assisted in the installation. He asked us to enlarge the forward air intake ducts to 4 7⁄8 inches (inside diameter). We did. He wanted us to move our oil cooler from the engine firewall to a spot on the rear baffle of the engine itself. We opted not to do that, wanting to see first how the engine cooling changed with the new, more precisely fit plenum under the cowl.

The initial flights were good, with cylinder-head temperatures trending cooler and oil temperatures near 200. Then it got hot, which it is wont to do in South Florida in the summer. Really hot. Melt-me-now hot. And the engine temperatures began to be a bothersome issue again. 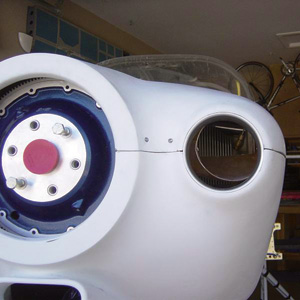 The 4-inch rings on the James cowl.

We called James, and he said, "Make the intakes bigger. A full inch bigger. I’ll give you the rings." We groaned. We’d just ground down the cowling a couple of months before, and managed to enlarge the intake area by about an inch without ruining the paint job. Now it was time to do it again? Well, yeah, it was. That’s Experimental aviation. We’d experimented with the 47⁄8 inch intakes and they weren’t enough. Even with two sets of louvers on the bottom cowl to help create suction to "pull" the air out of the bottom of the cowling, it simply wasn’t enough. We sucked it up and went back to work.

The new 6-inch rings are visibly larger. Now the airplane, from the front, looks more like a Cessna Corvalis than ever. (It’s not, of course. Those speed demons, whose legacy is the Experimental homebuilt Lancair lineage, carry significantly more horsepower, both turbocharged and intercooled.) No matter. We can handle being mistaken for a Corvalis. All we cared about was whether it worked. 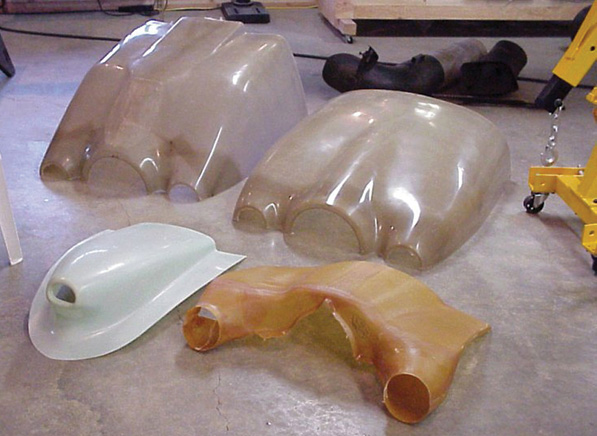 The raw materials: a top and bottom cowling, air scoop (white) and a plenum (orange), ready for the builder to trim and fit, and then trim and fit again. Eventually all will fit this custom installation. Then let the riveting, bonding and bolting begin! 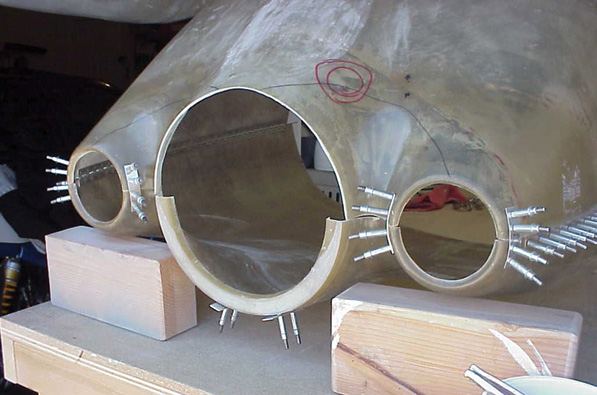 This is the best time to decide how large you want your air intake openings. It’s easy to trim the openings to an exact size and fit the rings before the final sanding and filling.

No time like a June afternoon, with surface temperatures of 95 and 90% humidity, to check out an engine’s performance. The airplane climbed out at 120 knots and 380 for the hottest cylinder. The oil temperature crept up to and held at 200. Air cooling at its best. We climbed out from sea level to 10,500 MSL. Again, the temperatures held, then began to drop through 360, allowing us to lean the mixture for performance in the last half of the climb. We were still climbing at 1000 fpm and 120 knots at the top. We flew the airplane to Virginia nonstop, burning 11 gph at 8500 feet, 70% power at 170 knots true airspeed with temperatures in the 380 range. Then we did a quick turn, the real test. 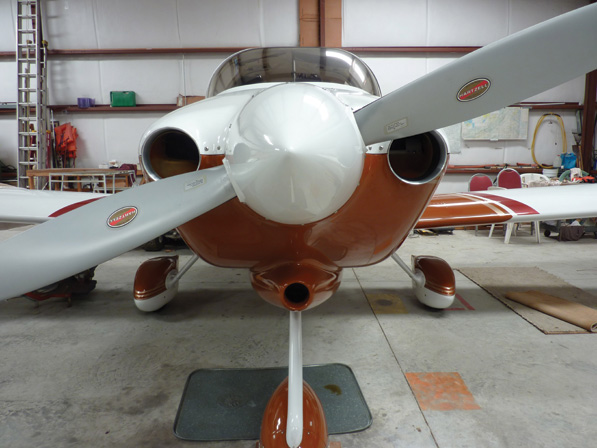 A face only a mother could love? There was a fear that larger air intakes would slow the airplane, but that does not appear to be the case. True airspeeds remain the same, as tested at altitudes between 5000 and 10,000 MSL, on several long cross-country legs. All they’ve slowed is the deterioration of the engine from issues related to heat damage. Good news. 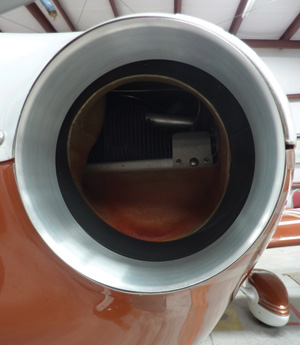 The new air intakes are 6 inches wide, tapering only slightly as they duct air into the plenum.

When an engine has been running with air flowing over it for hours to cool it, and then you stop the engine and the air cooling at once, the engine will continue to heat up for about 15 minutes before the temperatures of the metals and oil finally begin to drop. If you try to restart a big fuel-injected engine such as a Lycoming during these 15 minutes or so, say, after you’ve topped off with fuel, you might find yourself with vapor lock as hot fuel vaporizes in the lines. The engine won’t start. (We counter that with a priming system that allows us to pump cool fuel from the right tank through the lines and into the left tank, cooling things down. It helps.)

Once you start up from a quick turn, you’ll notice engine and oil temperatures warm right back up to cruise conditions, and often even warmer, before you can complete your taxi and runup checks. Getting air flowing through the cowling is paramount at this point, and it is best to get the plane in the air to do that. This was the real test of the new intakes-and they passed. Initial climbout CHTs closed in on but did not bust the 400 mark (and as we cleared the hot air at around 4000 MSL, they dropped below 380). The oil temperature held at 205. Success!

One interesting side note: Where before the No. 6 cylinder was almost always the hottest, now, after our plenum and intake changes, the hottest cylinder is No. 5. So what’s our next fix? We are contemplating rebalancing the fuel distribution across the cylinders. We would do that by swapping out the sleeves in our Airflow Performance injection nozzles, again, giving the No. 5 cylinder a little more avgas, perhaps. But that’s another column entirely. 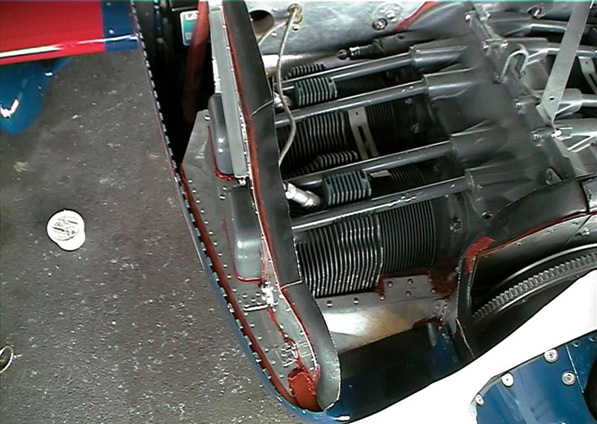 A plenum is not, by far, the standard for cooling baffling. Here is a baffle box made of silicon and aluminum baffling that sits flush with the top of the aircraft’s cowling. It is an inexpensive solution, tried-and-true. It does require that your top cowl be of a heavier material, though, as it will have to withstand the force of the air running under it.