When man first took flight with wings, he did it without power. Gliding on the wind from hills and dunes, the short periods of time aloft taught him the lessons which birds seemed to be born with. The mysteries of pitch and roll, the dangers of the stall—these were learned the hard way, over hard ground, sometimes at a terrible cost. Men died learning these fundamentals, but others picked up the pieces, built new wings and carried on. Drawings and prints from centuries ago show that this was not just a modern infatuation; men have tried to fly for centuries. 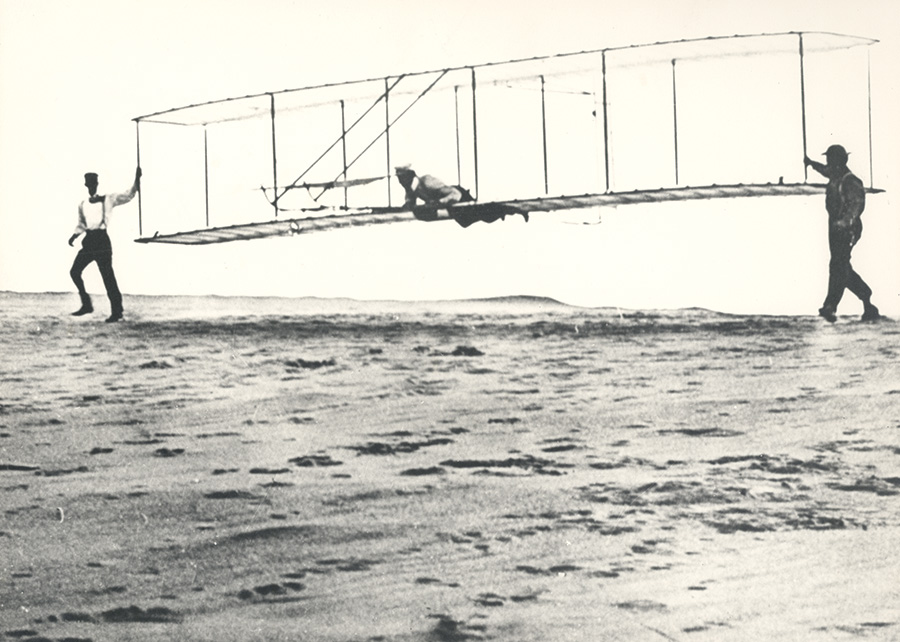 The Wright Brothers began with kites and progressed to free-flying gliders, as did their hero Octave Chanute.

In the late 19th century, men began to experience successful flights with rudimentary wings and sometimes even tails. The gliders were crude and heavy, usually with insufficient strength if they were light enough to fly, or too heavy if they were built strong enough (with the primitive materials available) to support a man. But with the right wind conditions and sufficient slope, the pilot’s feet could leave the ground for a few moments.

Eventually, a pair of brothers from Ohio attained a level of success with their gliders (which grew from kites, both unmanned and manned) and decided that they could stay aloft much longer if they had some power other than gravity and the wind. The Wrights are remembered mostly for those early powered flights from the level land below Kill Devil Hill, but before that success in 1903, they had used their earlier gliders to make hundreds of flights, which taught them about control and stability. They learned to fly with the gliders and transferred that knowledge to the airplane. Once they had achieved success with power, they never really looked back. Their early success proved that powered flight was possible, and their subsequent work at Huffman Prairie near their home in Dayton, Ohio improved upon those first steps by adding more power through larger engines and refined control techniques.

Others followed in their footsteps, adding more power, more control and better accommodations. Somewhere along the way, someone invented the fuselage, so that the occupants of these frail craft weren’t merely sitting on a wing with control surfaces hanging upon frail outriggers. Fuselages became enclosed, and the airplanes had room for passengers and cargo. The weight of machines increased and before anyone knew it, the modern airplane had evolved. Aviation entered the common consciousness and was considered “normal.” Few remembered that it began with young men running down hills or jumping off cliffs into the wind. By the 1960s, airplanes were rigid-winged and powered machines. Yes, there were sailplanes, but these also were enclosed aircraft, towed aloft via a ground or aero tow. No one thought of flying without such a craft; flying had reached a level of technological maturity that was simply not questioned.

The 1903 Wright Flyer took what the brothers learned from their gliders and added an engine to achieve sustained powered flight.

And then, something wonderful happened. There were still many who looked to the birds of the sky for inspiration and wished that they too could soar. The birds didn’t pay for fuel and they didn’t have licenses. Why did it need to be so complicated? A few young people adapted a design that had been considered as a way to bring spacecraft back to earth. The Rogallo wing was a simple fabric glider upon an aluminum tube frame and could support the weight of a human when launched off of a hill or cliff. It was, in fact, the modern equivalent of the Wright Brothers’ early attempts at flight—those early years when they climbed the dunes at Kitty Hawk and taught themselves to fly. Hang gliding became a sport overnight; the lure of flying free, with simple materials and no regulation, was too great for many to pass up. Whereas such activities were practiced by only a very few people at the beginning of the 20th century, tens of thousands took up the new sport of hang gliding in the latter half. Modern materials allowed rapid development of the various designs, and the quite primitive, low-aspect-ratio Rogallo wing that inspired many was quickly supplanted by lightweight gliders with real wings and tails. Young men and women created designs with enough performance to soar—literally—upon the wind for hours at a time. Flights began off a hill, but with any reasonable wind and a nearby ridge, a person could stay aloft for hours. 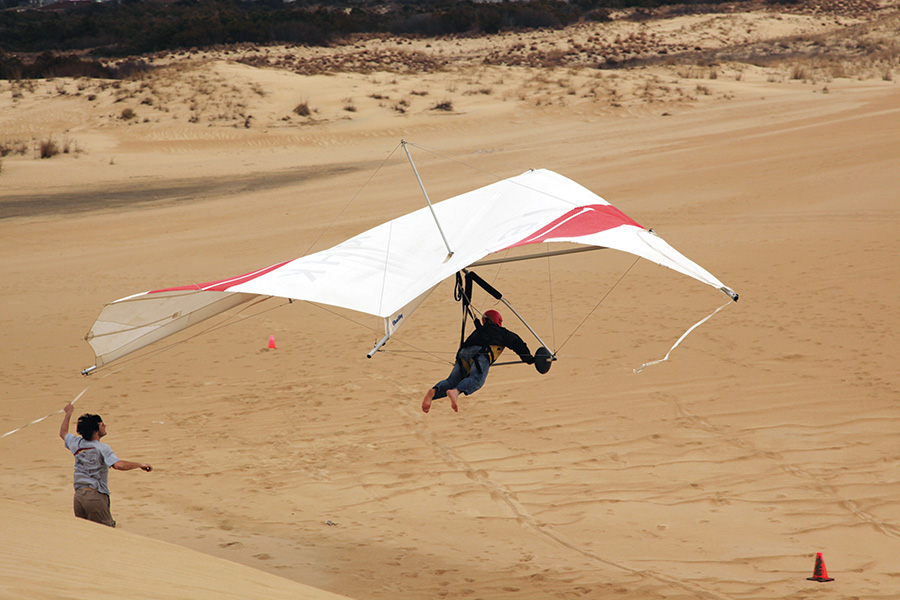 But what about the days when there simply wasn’t much wind? Or what about those poor souls who didn’t live near a prime hill, ridge, or soaring region? How could they partake of this simple joy of flight? Ever resourceful, it didn’t take long before someone fitted a small gasoline engine to a modern hang glider. Initially, these supplemented the wind, but as they grew in efficiency, motorized hang gliders were able to take off and land under their own power. Once this feat had been achieved, it took little time for the pilots and designers to add rudimentary wheels and structures to support them. These structures eventually grew into seats and soon there was room for a passenger. Motorized hang gliders were still fairly inexpensive, but they spawned the birth of the ultralight industry, with more complex designs that allowed their pilots to fly from runways and roam the area at will. Enclosed fuselages were not far behind. Ultralights eventually grew large and fast enough that the government began to regulate them as airplanes and the Light Sport aircraft was born. Licenses, inspections, certified hardware—gone were the days of young Californians throwing themselves off the hills into the wind. 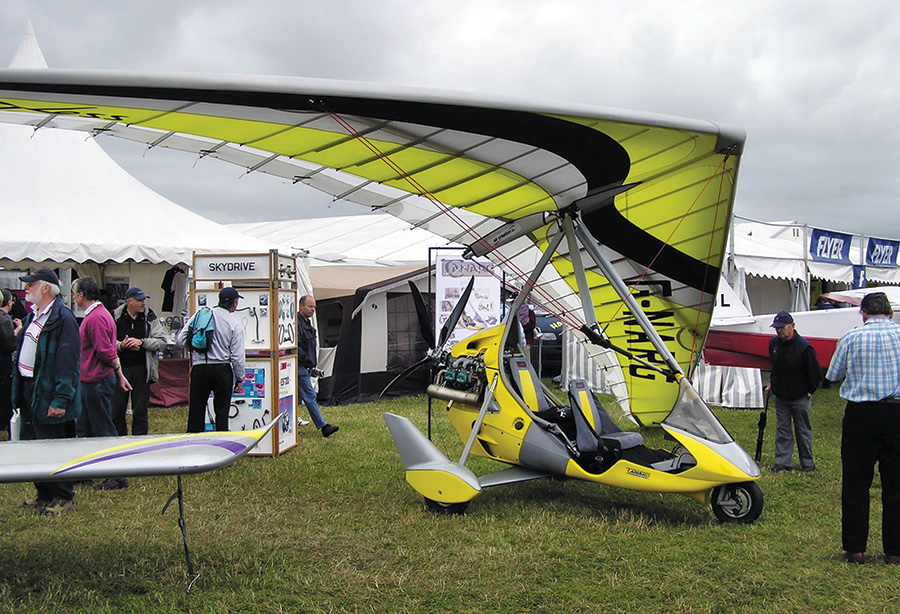 When adventurous hang gliders lusted for more power, they added motors and even a fuselage. They followed the trend of the Wrights from long ago.

Until…someone playing with a worn-out square parachute on the beach discovered that it could be flown like a kite—a very large kite. Eventually, with enough wind, the parachute lifted its flier clean off the ground. Once again, mankind had a new and simple flying machine.

And so it goes. The cycles continue. Whenever flying machines become complex enough, someone loops back to the beginning and creates yet another simple way to go aloft. It is almost as if we have some sort of undeniable urge for simple flight—to be born aloft on the wind just like the birds. No matter how impractical, we simply cannot help but return to the beginning, the roots of simple flight. As homebuilders, we are all really looking for that same thing. Find your own flying dream—whether simple or complex—and go aloft!