There isn’t exactly a surfeit of new kit aircraft designs being introduced during the best of times, let alone during periods of less than robust economic growth, so we’re pleased to be highlighting the Radial Rocket RG this month. Technically, it’s a different take on an existing design, the Radial Rocket TD (for taildragger), but it’s new enough with its retractable gear and numerous refinements to "qualify."

Jeff Ackland is the designer of the Radial Rocket, and you may recognize his name. Ackland brings more than two decades of experience to his current enterprise, New Century Aerosport in Olathe, Kansas. His first foray into homebuilding was building a Glasair I TD in 1987. He tried three engines on that Glasair: a 150-horsepower Lycoming, a Blanton V-6 and a 180-hp Lycoming, which stuck. Next, he and his father built a pair of Glasair IIIs. 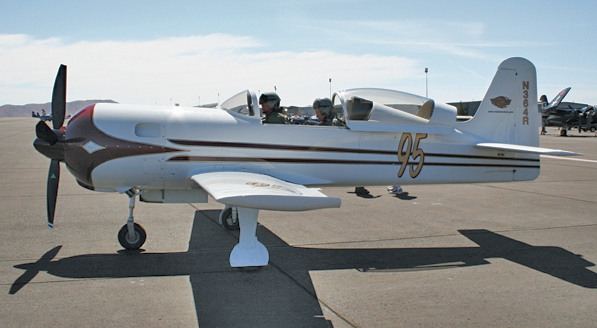 Later, Ackland went to work at Performance Aircraft developing the turbine Legend kit (a modernized P-51 Mustang). Ackland says he’s still very proud of the work he did on the Legend. Then came the Formula GT, a roomier Glasair designed for a V-8, but by the time it was finished, sporting a 260-hp Lycoming.

Do you see a pattern emerging?

The Radial Rocket started out as a one-off airplane for himself, built around the M14P engine (despite Ackland’s enduring interest in auto-engine adaptations for aircraft). The Radial Rocket TD first flew in 2004, and there was considerable interest in it from the get-go. However, some aren’t comfortable flying a high-performance taildragger, and thus was born the trigear version. "If it was going to be a trigear, it had to be retractable," Ackland said. "It’s a more modern look, kind of a modernized Bearcat."

One trick feature on the RG is its use of electromagnets for the retractable gear. Asked where the idea came from, Ackland explained that one of his employees suggested it. "Find me a magnet that’s half the size of a pop can and can hold 300 pounds," was Ackland’s challenge, and a relatively quick web search yielded a solution. The magnets are 2.5 inches square by 1.5 inches thick, he said, and it takes just a 30-pound hydraulic push to keep the wheel in the well.

So…what’s next for Ackland and crew? In June, Ackland took the "stock" Radial Rocket RG to the Pylon Racing Seminar in Reno. He intends to pilot the airplane in the Sport Class competition this fall at the Reno Air Races. Sport Class aircraft race on a 6.37-mile course at speeds that can reach 350 mph. "For its engine and the roominess it has, the Rocket goes around the track pretty well," Ackland said. "We loaded up everything we needed and flew the plane out there at 16,000 to 17,000 feet, and it does some very nice cross-country work. It’s not purpose-built, so it’s just like a ‘normal’ airplane." Reno will be great exposure for the Radial Rocket, Ackland says, plus it will be fun.

Now that the RG program is getting off the ground, another design is in the works, Ackland said, but it’s too soon to talk about it. "It will use some of the tried-and-true components of the Rocket," he hinted, adding that they’re doing fuselage lofting now to get the shape, and when they have a nice image, they’ll announce it. Should be interesting.

Kitplanes - December 7, 2010
0
Dont Look!Dick Starks Dawn Patrol article, Were going to have to count that as...