As this was written, it had been a scant three days since it was announced that one of the great visionaries of our time, Apple cofounder Steve Jobs, passed away. I was deeply saddened by the news, as I often am when I hear of someone who had so much more they could have done, but was cheated of that opportunity by an early death. Still, what an amazing legacy remains.

I have been a fan of Apple products for 27 years. Jobs attended the same junior high school that I did (though not at the same time) in Cupertino, so I felt a certain kinship with him and his innovations, and I bought one of the first Macintosh computers in 1984. I remember that purchase clearly, because it was an outrageous expenditure for me at the time. The whole setup, the printer, basic software and the Mac itself set me back $4500, and it took forever to pay off. Mind you, that was for an all-in-one box with a small black-and-white monitor, floppy disk storage, basic word processing and a dot matrix printer, hardly what we would consider state of the art today. Nonetheless, I had to have one, and I was thrilled to get it. Some friends thought it was foolish, but this tool was a game changer for me.

That first Macintosh was revolutionary in its simplicity. Part of its appeal was that it was “portable,” and that aspect served me well. It got me through both my undergraduate years and grad school, without fail. I held on to that computer, out of sentimentality perhaps, until 2007, when in a fit of downsizing I donated it. I think I kept it for so long because I felt as though I owned a piece of history, and I just couldn’t part with that. (In fact, I still have the carrying case for the computer, but now it holds office supplies.)

Apart from a brief foray into the PC world with a laptop computer in the 1990s, I have owned many Apple products since then. Every one of them was incredibly reliable, fun and straightforward to use, and elegant in the sophisticated simplicity of its design. The iMac I employ now is a far cry from that early model, but the same description applies, and it is in part the aesthetic beauty of the machine itself (and its accompanying operating system) that allows me to tolerate spending as many hours in front of it every workday as I do.

So I wanted to talk about the allure of simplicity as we present our annual Plansbuilt Buyer’s Guide this month. If you are inclined to construct an airplane yourself, it doesn’t get any more basic than scratch-building from plans. Although the process of rendering the plans has changed over the years, in some cases enhancing the quality of the product significantly, the basic premise remains the same. You acquire a set of drawings, start gathering together materials or materials kits, and off you go—if you’re lucky, slowly but surely assembling an aircraft until you have something that is signed off as airworthy and ready to fly. I can imagine what a sense of accomplishment that must be, essentially having made something from almost nothing. I’m sure there is great satisfaction in it.

In certain cases, building from plans is the only way to acquire a particular design, because it simply does not exist as a kit. Plans also offer a way to tap into history via replica aircraft that may not be available in any other form. For some builders, constructing from plans provides the opportunity to tinker, improving on an existing design from the outset with a tweak here and a redraw there. Breezy builder Matt Hlavac, featured on the October 2009 cover of this magazine, comes to mind as someone who wanted the challenge that this type of building provides. He took a long-proven design (the R.L.U.-1 from Carl H. Unger) and amended it so that the finished product was precisely tailored for his particular mission: local low-and-slow flying. Simply for fun. And he’s had a great time piloting his Breezy in the gentle clime of Southern California. For him, the building project was a thorough education and an extremely gratifying experience. If that’s your inclination, there are likely more than enough listings here to whet your appetite without breaking the bank.

Jobs, at a Stanford University commencement speech in 2005, discussed the shortness of life and the need to seize the moment and follow your passion. That seems an apt characterization of so many participants in our small niche of general aviation, whether kit builders or plans builders. Passion and the desire to realize a dream are the prime motivators for pursuing almost any airplane building project, sometimes despite skepticism from family and friends. I’ll reiterate what Jobs advised the students at Stanford that day: Stay hungry. Stay foolish. And I’m sure he meant that in the best sense of those terms. Words to live by. 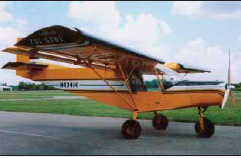