In the early days of fully automated flight controls in airliners, crews could be heard to exclaim, "What the heck is it doing now?" As we gradually move away from direct mechanical control and familiar systems-fixed-timing magnetos as an ignition source, for example-there’s great potential for confusion in the cockpit. Already pilots sometimes regard autopilots as seemingly having a mind of their own when the operating mode isn’t clearly annunciated, or there are gaps in the pilot’s understanding of the box.

Along those lines is an experience Bill Repucci had a couple of years ago. (Repucci is an occasional contributor to KITPLANES, which is why he cannot report on this new product.) "I was an early adopter of the P-Mag [electronic ignition system] on my RV-9," he said. "On the first flight, everything was fine, but on the second flight, the CHTs [cylinder-head temps] went through the roof. I reduced power and landed successfully. After testing, I determined that one of the two P-Mags had lost its TDC [top-dead center] timing." The result of the lost timing reference was dramatically advanced ignition timing, which can manifest as raised cylinder pressures and elevated CHTs.

Repucci appreciated that what he didn’t know in the cockpit during that second flight influenced his response to the CHT indications. More to the point, he had no idea precisely why the CHTs had shot up, and even if he’d realized that it was an ignition issue, he still didn’t know enough to quickly decide which of the two ignition systems to disable for the return to the airport. What the heck is it doing now? 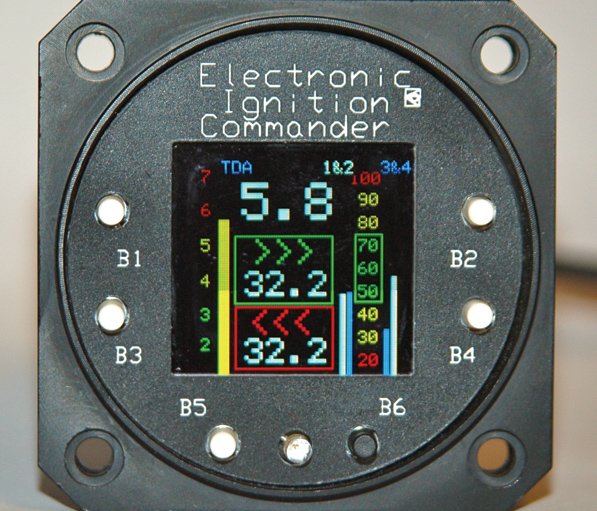 The default screen shows the TDA (timing divergence angle) as a bar graph and the largest numeral (5.8). Numbers in the green and red boxes denote the actual requested ignition advance. The bar graph to the right shows the duration of the ignition event.

"This began a dialogue with the guys at EMAG Ignitions," Repucci said, referring to the company that produces the E-Mag and P-Mag systems. (For those unfamiliar, these are self-contained, four-cylinder ignition systems that take up residence in the vacated magneto hole. The E-Mag model uses the ship’s electrical power, while the P-Mag model contains an internal generator that can run the system without any outside assistance.) In that discussion, Repucci learned that the P- and E-Mag systems have integrated serial ports that spit out running data for each ignition. In fact, EMAG offers a PC-based program that can be used to monitor ignition-system function and health. Unfortunately, toting a laptop into the cockpit is fairly inconvenient.

Enter Ed Anderson, who was looking to create an instrument to help understand what the computer driving an auto-engine conversion was doing. Between them, they created EI Commander-a seemingly simple device with interesting implications.

In basic form, the EI Commander reads the serial data streaming from one or more of the newer 114-series E- or P-Mags and presents it in a simple color LCD screen housed in either an instrument-size circle (2.25 inch) or a rectangular module. What to display and how to do it became a large part of the initial development, but what Repucci and Anderson have settled on makes a tremendous amount of sense when you think about it.

The primary screen on the EI Commander is meant to show the actual advance (in degrees) for each system installed. (In truth, the EI Commander will be much more useful to those who install two E- or P-Mag systems.) Because one of the failure modes that’s most difficult to diagnose quickly is loss of timing-that is, the ignition somehow loses track of TDC on the #1 cylinder and therefore can’t set spark timing accurately-it’s the most prominent number on display. A bar graph shows the difference in degrees from one system to the other, a calculation made possible because the E- and P-Mag systems output both a data-stream-based timing reference and an analog "blip" that the EI Commander can compare.

"What we found in testing was interesting," Repucci said. "We almost never see a timing difference of less than 2. So we have decided that a difference of up to 3 is OK, but that anything from 4 to 5 is worth noting, and a difference greater than that is a reason to check the system." Repucci and Anderson discovered what most old-time engine builders already know: The natural slop in the timing gears in your average four-cylinder Lycoming makes the timing vary no matter how accurate the ignition system you’ve bolted on. 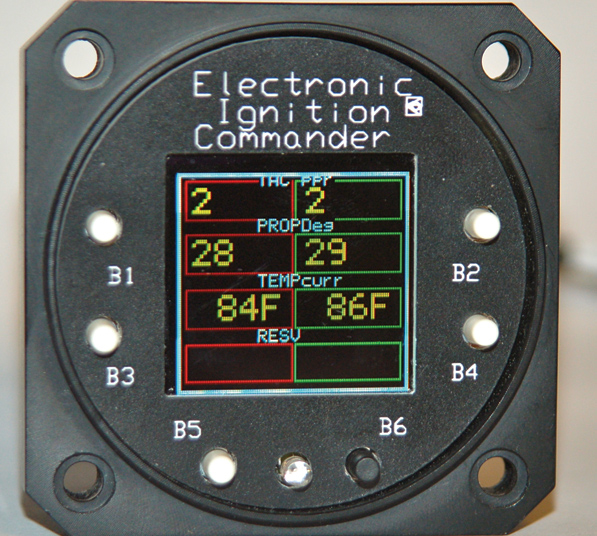 Other screens show key parameters in the attached E- and P-Mag ignition systems, including temperature. Buttons around the face sequence screens are used for setup of the user-defined timing skews.

The E- and P-Mag systems kick out enough data to do some interesting things. For one, they relay the duration of the spark event. Who cares? Well, a too-short event can signal a shorted lead or fouled spark plug. An event that takes too long to complete points to a broken plug component or disconnected wire. These values, arbitrarily arranged on a 0 to 100 scale, are depicted for each coil pack for each E- or P-Mag in the system. Other passive features include a tachometer, Hobbs-like hour meter, system voltage (inside each ignition box), running and maximum temperatures, and a host of other parameters that are resident on the outgoing data stream. If the E- or P-Mag kicks it out, the EI Commander can read it.

That’s cool, but one of the most intriguing aspects of the EI Commander is the possibility of creating and implementing alternative spark curves literally on the fly. Again, some background is necessary: The normal E- and P-Mag systems allow the user to select one of two internal maps, the A or the B. The difference is simply the amount of maximum advance. Regardless of the map, the E- and P-Mag systems set timing at TDC for start, ramping up toward the maximum advance at maximum rpm, with a further skew (limiting advance) at high manifold pressures.

The rectangular module uses a remote housing for the processor, seen on the right side of the ribbon cable.

In the EI Commander, the process is to leave the physical jumper out of the E- and P-Mag system harness. Then the EI Commander can be used to force the E- or P-Mag into either of the two standard curves, A or B. What’s more, the EI Commander has the memory to store an additional three maps, whose limits can be defined by the user. The shape of the advance curve does not change; rather, the user-defined settings merely move it up and down, left and right, if you think of this as a curve drawn on paper. This flexibility is especially useful for fine-tuning the ignition to ambient temperatures and is particularly good for aircraft with fixed-pitch props, where separating manifold pressure and rpm isn’t possible.

The EI Commander is available now, and requires the later 114-series E- or P-Mag systems; it does not work with other manufacturers’ electronic ignitions (because they don’t spit out the data stream needed). In the 2.25-inch instrument mount, the full EI Commander costs $600; the rectangular unit is $100 more. A newly developed EI Commander Lite-all the same functions, but it’s restricted to the two standard E- and P-Mag internal maps-will sell for $400, with a software upgrade to full functionality available for $200. 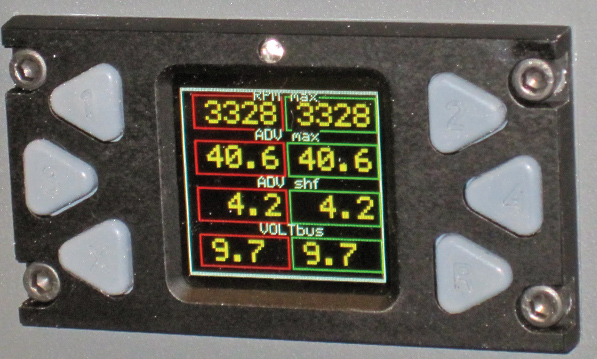 An alternate surface-mount housing is available for $100 more.

Kitplanes - January 19, 2008
0
Which engine monitor is best? Author Stein Bruch may not offer a definitive answer for all builders, but he details the factors that should be considered before arriving at a final decision, along with tips on how to achieve a successful installation.