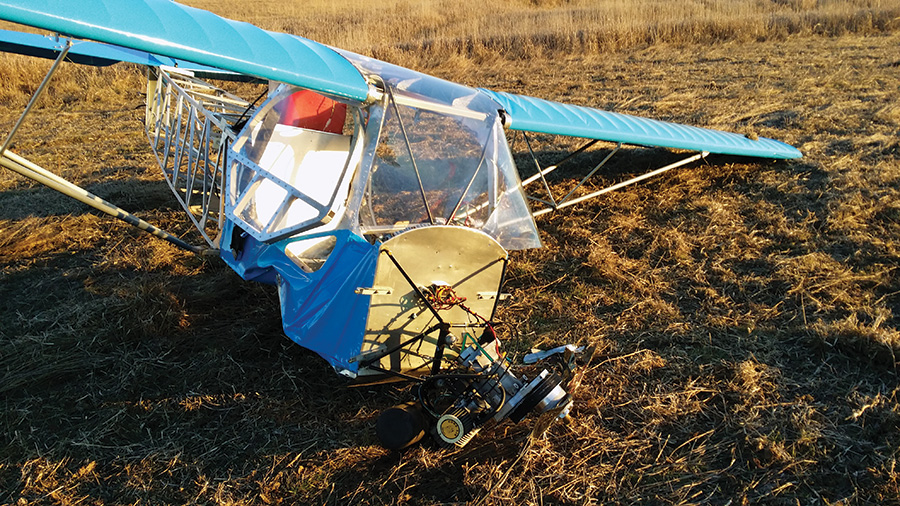 On a beautiful day with light wind, a Belite UltraCub rose off a 2000-foot grass runway and almost immediately entered a classic departure stall. If you are like most pilots, you have probably already made two assumptions—the pilot was inexperienced, and he probably died in the crash. Perhaps surprisingly, neither is true. Gary Knight, a CFI and ATP pilot with 9000 hours, walked away from the crash with an inch-long scratch and a couple of bruises. Oh, and a huge dose of embarrassment.

It was December 17, the 110th anniversary of the Wright brothers’ first flight, and Knight didn’t hesitate to accept the offer of his friend, Jeff Givens, to fly the six-week-old ultralight after Givens landed and said, “You take it around the pattern.” The need for transition training didn’t occur to Knight. Flying the Belite doesn’t require a pilot’s license, a medical, or currency, and he’s a professional pilot with lots of GA experience. How hard could it be? After a quick briefing on the ground, he jumped in and rolled off.

The Flight and the Crash

The little engine performed flawlessly, and there was no sign of a looming problem. Although Knight had been warned not to over-pitch the initial climb, that is, in fact, what he did. He climbed through ground effect, soon feeling like he lost control of the aircraft, but what was really happening was a departure stall, which quickly turned into a spin. When Knight realized what was happening, he slammed the stick forward and recovered, just as the aircraft impacted the ground. Of course it was too late. A few seconds later, he was out of the aircraft, walking around the wreck, and pondering what had just happened. 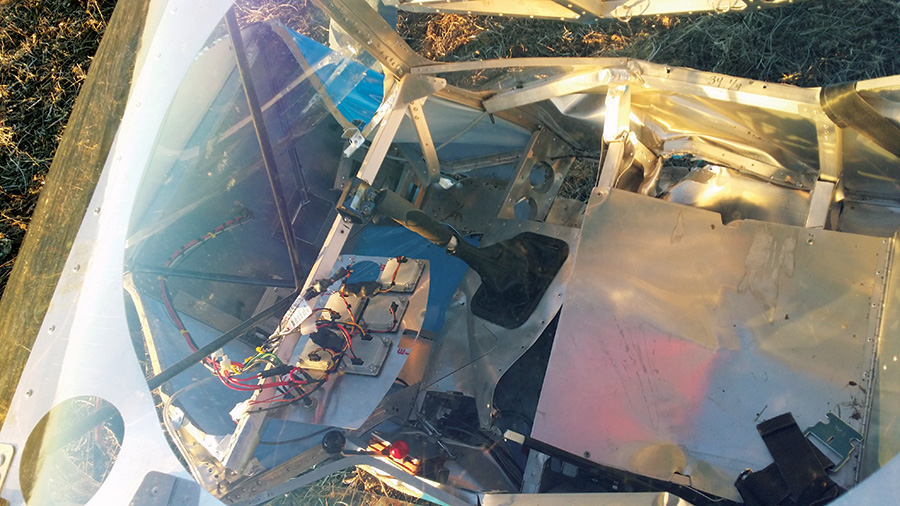 The wrecked cabin of a Belite UltraCub aircraft. Three of the undercabin cross boxes are partially visible. The front cross box is clearly visible just above the control stick, with two round lightening holes about 3 inches in diameter.

According to Givens, who observed the accident, the aircraft hit the ground at an impact angle of around 45 degrees. Thankfully, some design decisions by Belite conspired to protect Knight from his own mistake.

The Belite UltraCub’s cabin is composed of two aluminum side boxes and four cross boxes. The side boxes run along the sides of the cabin, and they absorbed crash loads from the front of the cabin heading backwards; the four cross boxes under the pilot absorbed loads coming up from the ground and protected the bottom part of the pilot’s torso. These boxes are constructed from square tubes with very thin walls and from a front side and a back side continuous aluminum frame/gusset, which spans the entire length of the tube.

The pilot’s seat bent, but remained intact. Below the pilot’s seat is what Belite calls a “butt plate,” which is an aluminum plate with angle reinforcements below and extra gussets. It did its job very, very well. It connects to two of the cross boxes, and the pilot seat sits on top of the butt plate. 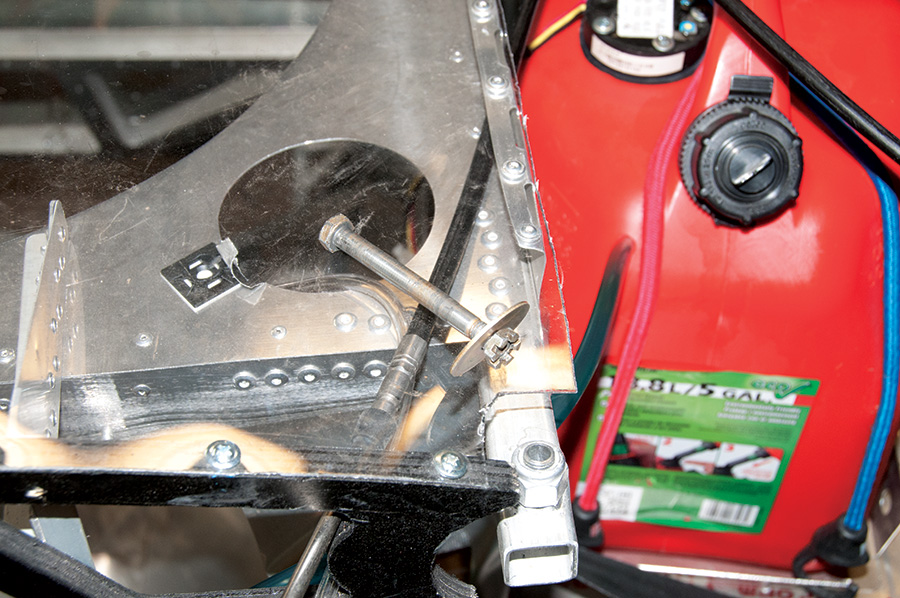 Wing attachment bolt, AN-5, on the wrecked Belite showing bend. The manufacturer estimates there was approximately 9000 pounds of shear on this bolt. Note that the fuel tank survived the crash!

The four-point safety harness also did its job. It did not break. In the event that it had failed, the pilot’s head and torso would likely have impacted forward, with severe consequences.

Belite’s cheap $12 fuel tank from the home improvement store held together without any problems. However, the impact did cause significant damage to the aircraft, including:

• The single-cylinder Hirth F33 engine, along with the motor mount, muffler, and cylinder head were seriously damaged.

• The front cabin aluminum angle braces and a lot of other stuff were severely bent!

• One wing, which had hit a wingtip, had substantial internal damage—the sail/anti-sail tubes were either bent in compression or snapped in tension; the mainspar and false rib spar had a subtle bend. The other wing had one sail/anti-sail mount fitting sheared off from the spar.

• The impact of the wings caused their AN-5 attachment bolts to bend—a shear stress load that was many, many thousands of pounds. The top cabin cross-connection tubes had deformation damage around the attachment bolts.

• The rear fuselage had a couple of bends in the aluminum longerons, immediately below the tail feathers. 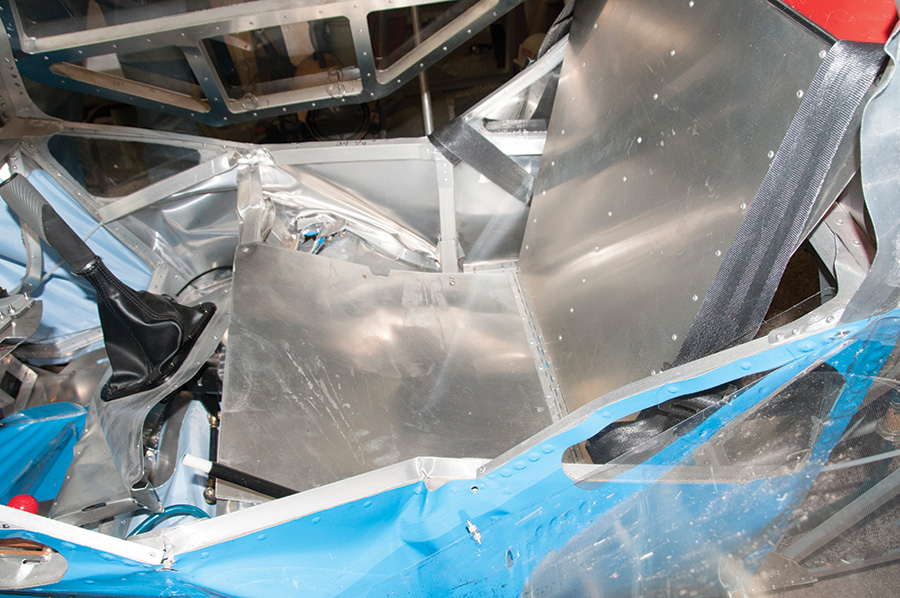 Although the cabin was heavily damaged, the pilot seat (and pilot) survived.

“I never would have thought myself capable of such a fundamental mistake,” siad Knight. “It turns out, I was mistaken. Pilot miscontrol is the leading cause of homebuilt accidents to date. We can easily get deceived jumping into a homebuilt and assuming that it’s going to fly like the planes we usually fly. I’d never flown an ultralight aircraft before, much less one with just 28 hp, and I failed to respect the difference. The incident emphasizes the importance of getting good transition training when it is available, but it’s not an option for a single-seater.

“In hindsight, the failure is so obvious: allow the aircraft to gain speed before climbing out of ground effect. Listen and act on the information provided in a pre-flight briefing. Perhaps spend more time getting acquainted with the aircraft while in ground effect hops. The next time I fly this aircraft—and I will fly it again after it is repaired and rebuilt—I will note the indicated airspeed at liftoff and keep a healthy margin of additional speed until I flare to land!

“I am amazed that I came through this essentially unharmed. What a great job Belite has done making this aircraft safe!” 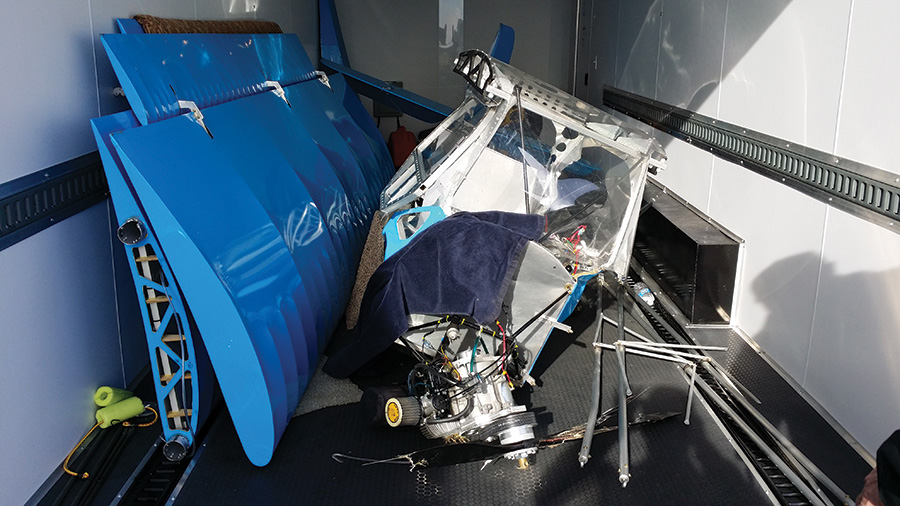 The wrecked Belite in a trailer, returning to the factory for repairs.

“I can’t express strongly enough how pleased I am with the crash capability of the cabin,” said Belite CEO James Wiebe. “Everything in the cabin structure ‘gave up’ under mostly compressive forces in a way that unwound energy from the impact without causing any appreciable damage to the occupant.

“If I wanted to add more strength to the cabin, I would add it on the side boxes, but this would be at the expense of weight, and FAR Part 103 is always a balancing act between the mandate for low aircraft weight and striving for safety. To remain in the ultralight category, the aircraft must be light, often at the cost of safety. Such is the oddity of Part 103, which provides a weight standard, but not a safety standard. Experimental airplanes do not operate under the same restriction.

“Another concern in an incident like this one is lacerations caused by sheet metal. A possible solution is the use of rubber slip-on edging, especially around the interior pieces of the cockpit.

“I’m aware of a lot of aircraft accidents. I’ve lost a Belite customer to an aircraft accident—but not in a Belite. He had a departure stall in a Rotax-powered aircraft of another Experimental design. We’ll never know the exact details, but things went very badly for him. I know how these kinds of takeoff accidents often end—poorly. I’ve also heard of a new owner who crashed his Kitfox Lite on his first departure. He did not survive. That was with an engine significantly larger than our F33 28-hp Hirth, but also at a higher field elevation. The original Kitfox Lite looks very similar, but uses a different wing, (smaller), different flaperons (smaller), different fuselage (steel instead of aluminum), and there are other differences as well.

“I have developed very strong personal biases toward my aircraft designs. We’ve lost sales of Belite Aircraft over perceived differences in design philosophies vs. our competition, and this maddens me. I’m aware of what happens when a non-enclosed light or ultralight aircraft impacts the ground, with the pilot’s feet literally hitting the ground before the aircraft structure. It rarely ends well for the pilot.

“I’m also confident that some percentage of the readers of this article will think I’m wired a little oddly for co-writing this article. Yes, I am. Ultralight aircraft accidents are never investigated by the FAA, and pilots rarely ‘fess up to how that stall-spin accident actually occurred. This is a unique opportunity to see what happened to the airplane and hear what we can learn from the pilot’s story. Let’s do that.”