Building an airplane is a daunting task. Whether you are building from plans or a kit, getting from start to finish is a project measured by most people in years, not months, and often it becomes an endeavor with no clear end. Too frequently, projects get stalled because the builders get frustrated with a single task that they can’t get past. Because they can’t get through it, they feel like they can’t do anything else. This task becomes a massive roadblock for the entire project, which then begins gathering dust in a corner of the garage. The next thing you know, household items are getting stacked on top of airplane parts, and the entire dream becomes nothing more than another sedimentary layer in the (former) builder’s life history. 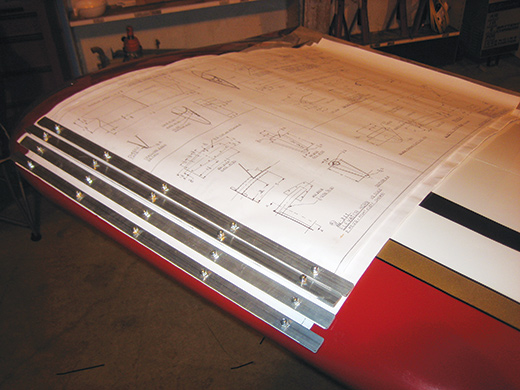 Having your plans sheets separate, or in a roll, makes them hard to access and keep neat. You can start a project by binding them into sub-kits and making them easier to use.

But it doesn’t have to be that way. Building a kit airplane is often thought of (by those who have never completed one) as a linear project that starts with Page 1 of the manual and ends when the back cover is reached. Tasks are expected to be completed in the order presented, creating what we call in the engineering world a serial critical path, or a path in which any single roadblock will bring things to a grinding halt. But there is another way, the road of parallel development. Parallel development means that there are many things you can work on at any one time, or all at once. Wings, tail, fuselage—there is no reason that they can’t all be ongoing sub-projects on the way to a completed airframe. And within major airplane components, there are often multiple tasks that can be underway at the same time. For instance, there is no reason that you can’t be working on a metal rudder at the same time you are doing a fiberglass tip on the vertical stabilizer. Often you reach a point where you either get frustrated with a component, need to wait for a piece of hardware (or replacement part), or simply have to wait for a fiberglass layup to cure before proceeding. Rather than quitting for the night (or the week) and going inside to watch football, why not look for the next step on some other part of the airplane? You do like to build, right? 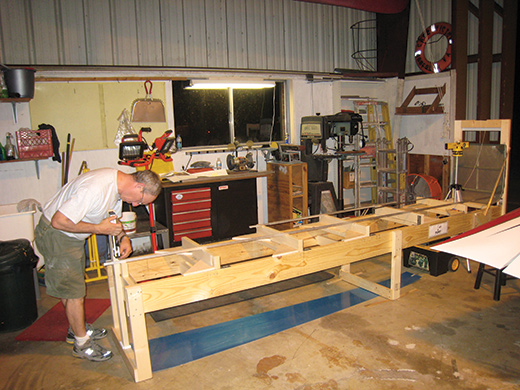 Having enough space, but not too much, to build efficiently can help a project progress much more quickly.

So that’s the first trick to building efficiently: Make sure that you do not force yourself down a single path from which there is no deviation. Be prepared to have multiple projects going on simultaneously. It has often been stated that no one can build an airplane; it’s impossible. But you can build airplane parts, which later get assembled into an airplane. So think of the airplane as a bunch of smaller projects; as with many complex undertakings, it is more manageable that way. There are other things that you can do to greatly increase your efficiency and therefore the probability that you will someday fly your creation. 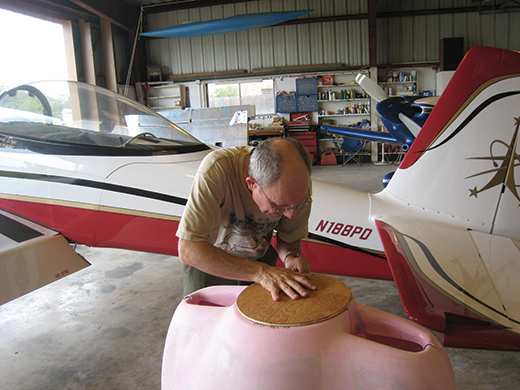 Building in a hangar might be every pilot’s dream, but be prepared to get slowed down by having airplanes in your way all the time.

Keeping parts and supplies in the pipeline is vitally important if you want to avoid work stoppages. Many consider build time to be the time that they spend in the workshop. I would venture a guess that I probably spend at least an hour outside the shop for every hour I spend inside, doing research on components, studying the instructions (and plans) and ordering things that I know I will need down the line. While there are a number of kits that are so complete that they even include a razor blade taped to the box to help open it, most kits require additional parts or materials—or the creativity of the individual builder will demand that additional bits and pieces be obtained to build the airplane of his dreams. When I am involved in a build, it is a rare day that goes by when I do not spend a little time thinking ahead on fuel fittings, control cables, avionics supplies and all of the little things that can bring you to a screeching halt when you run out (like a few D-Sub pins, or that AN823-4D you need because you changed to a different brake design and need to route the hoses in a way not in the original plan).

Many people choose to build a kit airplane because it is a handy way to buy a plane on the “installment plan.” They don’t have the cash to buy an airplane outright, but getting one sub-kit at a time is affordable and keeps them busy (and enjoying being part of aviation), while eventually getting them to their goal. But if you can afford to buy multiple kits at once, this will greatly increase your ability to work down multiple paths. Many times I have jumped from wings to fuselage to empennage in the same work session, and finishing components early can help with fit checks and understanding where things are eventually going to end up. Having the entire kit on hand improves your overall perspective on the project, and unless this thought overwhelms you, it can really increase the efficiency of the build.

Yet another way to help build efficiently is to have a plan. Sounds obvious, but think about the last time you walked into the workshop just to work on the plane. How much time did you spend shuffling tools around and being non-productive while you figured out what it was you wanted to do? Contrast this with the idea of walking into the shop knowing that you are going to install the brake lines or rig the elevators or trim that odd bit of cowling. I admit that after a vacation, I will come back into the shop and waste hours trying to figure out what I want to work on, as I have gotten out of the rhythm of the build. It would be far more efficient in this case to sit down with the build log and spend an hour coming up with a plan for what needs to be done next than to simply wander around from part to part, never actually accomplishing anything. Even when you are working every evening, you need to spend a little time before the shop lights come on, planning what you want to accomplish. This is not only efficient, it makes you feel good when you meet a short-term (daily) goal. 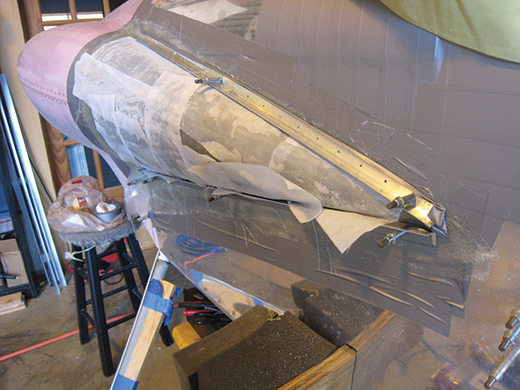 Fiberglass parts take time to cure. Use that curing time to work on something else, or maybe you really should go into the house to see how many children you have!

Fiberglass finishing work is a great place to apply a little thought and make huge gains in efficiency. The basic evolution of a fiberglass part involves laying up glass or filling in resin, waiting for it to cure, sanding off the excess, and then repeating the process. The “lost time” doing this work occurs while the resin is curing, usually measured in hours, often at least 4 hours in ideal temperatures with fast-setting chemistry. If you are an average builder who works a regular day job and builds in the evenings, you might go out to the shop after dinner and do a layup—and your evening is finished, because you’ll be headed to bed before the part is ready to work on again. The next evening, you get to do some sanding on the part. Lots of lost time there. The actual work doesn’t take much off the clock; it is waiting for the cure that kills you.

So here is how you can improve your building efficiency by a huge amount: Get into the “cycle” at a different point! Start with a part that is ready to be sanded (from your previous layup session). Sand it to shape, then do the next layup—you have now done two things in the work session. Then go to bed. Wake up early the next morning, sand the part again and do another layup before leaving for work. Let it cure, and when you get home, it is ready for sanding and another layup. You have now gone through two full cycles in 24 hours, rather than one, and probably taken fewer hours in total. Use the time in the evening after you have made the layup and set it aside to work on some other part of the airplane. 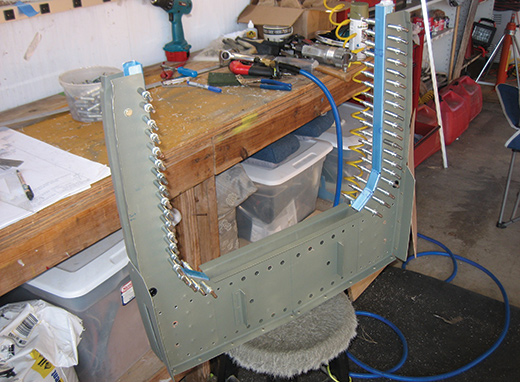 Having enough Clecoes to not have to ration them makes metal airplane building more efficient, and much simpler. Buy (or borrow) more than the minimum, and you’ll thank yourself!

I am a strong believer in the high rpm of air drills to work on aluminum structure, and I generally have three of them handy for a project: two that are always loaded with a #30 and a #40 drill bit (can you tell I mostly work on RVs?) and a third that I use to swap bits and countersink cages. Since 90% of the holes drilled in an RV are covered by the first two drills, I save a lot of time by not having to change bits. Recently, I picked up a new-technology cordless drill with lithium batteries and a quick-change chuck. This is rapidly becoming my favorite choice for the “third drill,” as I don’t have to go find a key to swap bits and accessories. It has plenty of power and a long-lasting battery—and has increased our shop efficiency quite a bit. 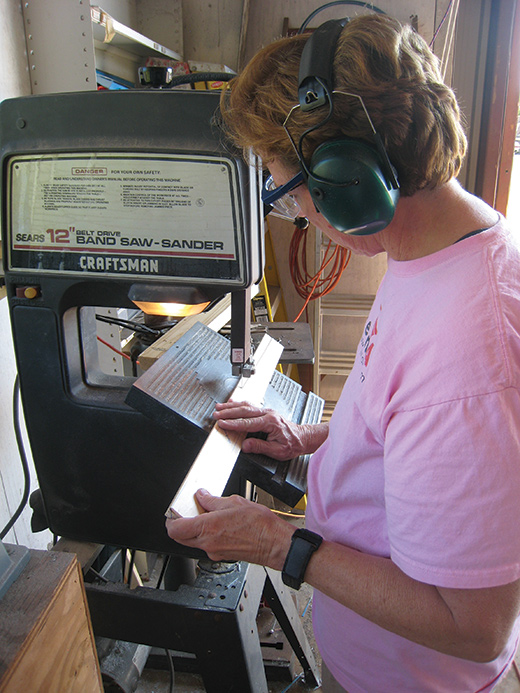 Lastly, and this might be counterintuitive for those who haven’t tried building in a large shop, there are distinct advantages to building a space that is less than cavernous. My current building space is also our private hangar, occupied by two flying airplanes (which have to compete for the coveted front spot). Work benches and toolboxes are spread around three of the four walls, which means that there is a great deal of shoe leather consumed in going to get a hammer, then a wrench, then a drill bit. Nothing is ever in the most convenient spot, and it wastes a lot of time, even when everything is put away where it belongs. A more efficient shop is one in which you have to move around less, and all of the tools and benches are in easy reach. It also helps to have multiple copies of things like Cleco pliers—like maybe six of them—spread around. Oh…and having at least one air hose on each side of an airplane project is priceless!

Getting an airplane finished is a matter of perseverance and overcoming the many obstacles that seem to arise along the way. There is no reason to make those obstacles larger than they already are, and coming up with ways to waste less time and effort is a great way to flatten out the road ahead. Building an airplane is really a thinking person’s game—and the amount of thought you put in will decrease the amount of physical effort required to reach that magical first flight.

Hate It When I Do That!