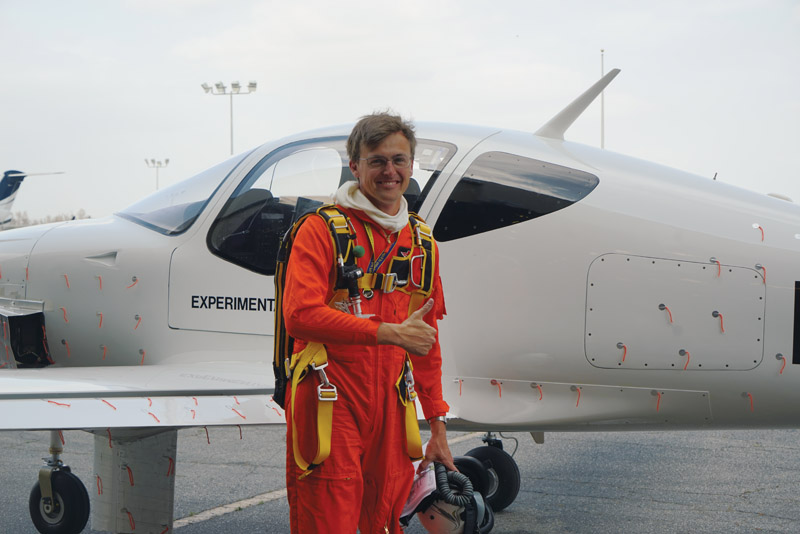 I had 600 hours sitting in a parachute harness but had never jumped out of an airplane.

Within a few weeks I lost two close friends (and damn good test pilots) to catastrophic structural failures of high-performance aircraft. Structural failure is the scariest scenario that test pilots need to consider when testing aircraft, and typically the only contingency left in this situation is your parachute. I have twice considered “going for help” as Northrop Grumman test pilot Jeff Holle describes it, and both times I was confident in my ability to get out of the airplane; I had drilled that many times, and I was sure I could deploy the parachute.

But while I had read about the free fall, I had never experienced it, and with that came risk. After making the move from part-time contract test pilot to full-time test pilot at Mooney Aircraft, I couldn’t put it off anymore. I signed up for the accelerated free fall course at Skydive Perris, a drop zone at Perris Valley Airport, east of Los Angeles in Southern California, and I am very glad that I did. 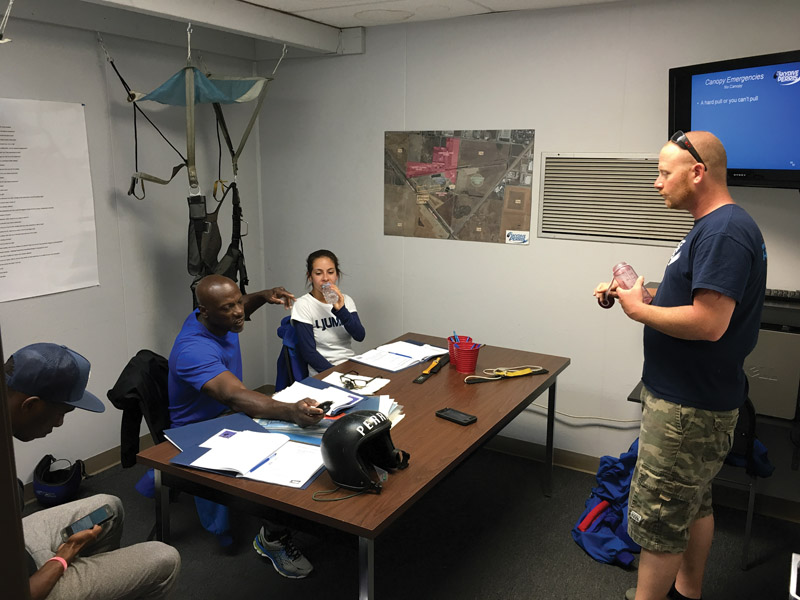 Skydive Perris instructor Josh Colby walks us through the ground school portion of the course in one of the school’s several classrooms.

I know of three examples of test pilots who survived being flung from disintegrating aircraft, finding themselves alone and in free fall. The most famous story is Bill Weaver, who was flung from his SR-71 as it disintegrated at Mach 3.2 and 78,000 feet. His description of coming out of G-LOC with his visor frosted over is the kind that stays with you. Without visual reference he had to use his other senses to determine that he was in free fall.

The second less-known story involved a very slippery ultralight sailplane doing dive speed testing. The structural failure of the main spar caused uncommanded deployment of the ballistic recovery parachute (BRS). The deceleration of the aircraft during the high-speed parachute deployment was violent enough that the test pilot was ejected through the canopy and out the front of the airplane wearing his parachute.

The third story was very similar to the second. In this case, during debrief with the pilot, a particular statement stood out to me: The pilot recalled that he recognized with limited senses the indicators of free fall from his skydiving background, and from that knew to start the process of deploying the parachute. When I heard this report, I became very concerned that I needed to have this skydiving experience if I was going to do this for a living. 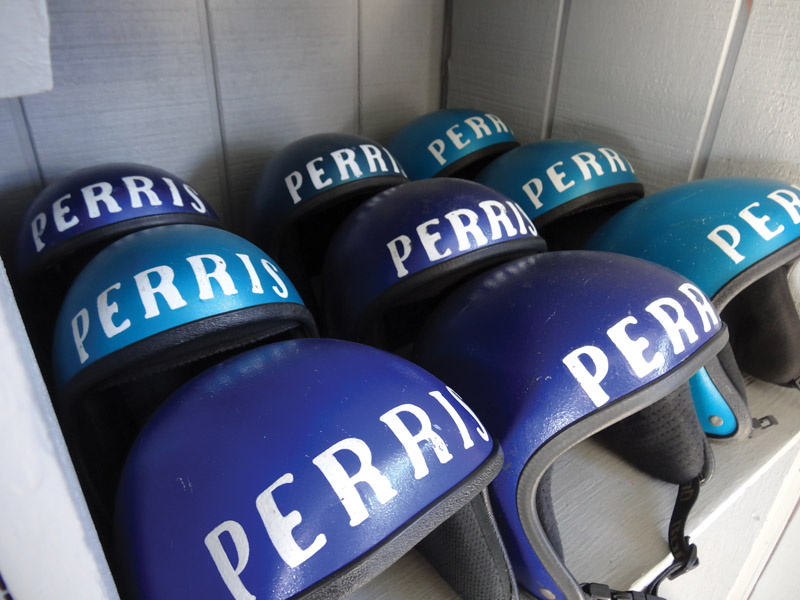 I arrived at the drop zone at 8:00 a.m. for the 8:30 class. Driving up to the site, the “skydive vibe” was strong. Skydive Perris is one of two drop zones in the world that also has an indoor skydiving facility as part of their complex, and its hourglass shape dominates the horizon. Beyond the hourglass, a series of single-story buildings are filled with energetic people that seem genuinely excited to be there. The air was diluted with jet exhaust from the fleet of Twin Otters and Short Skyvans that do the heavy lifting for the drop zone. The X-Games aesthetic is reminiscent of a snowboard shop or a skate park, but there is a profound wide-eyed sobriety that sets this culture apart from those terrestrial counterparts. This could be driven by the number of military jock special forces types that make up about half of the students at the school, but regardless, the vibe is different from other airports I have visited.

Also different from a skate park was the very formal legal process. The written liability waiver was accompanied by a video shown with a similar message, and at the end of it all, I read a statement in front of a camera about my consent to the risks of skydiving. The whole experience was an impressive combination of extremely friendly and casual staff, surprisingly well-thought-out course material and facilities, all while exposing a wide spectrum of the uninitiated public to an extremely high-risk environment. It was fascinating to watch. 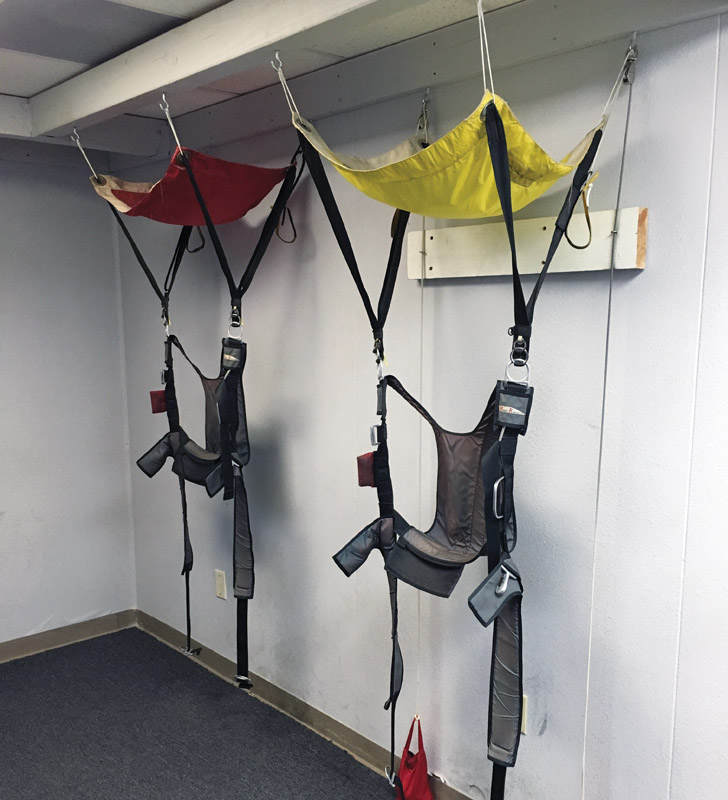 I enrolled in the accelerated free fall first jump level one course. The course included 8 hours of instruction, two runs in the indoor skydive tunnel, and finally a solo jump with two instructor/spotters. The class cost $350, and I was able to reserve my slot three days before the jump. The class was made up of five students, three who had never jumped before, and two who had multiple tandem jump experiences. One student was late high school age and was there with his father (neither had jumped before). The two most experienced jumpers in the class were both in their 20s. None of these students were pilots or came from technical backgrounds. All five students ended that first day with a successful jump. Our primary instructor for the ground portion, Josh Colby, had been at the school for two and half years and has 4000 jumps. He walked us through the coursework and wind tunnel work leading up to that first jump. 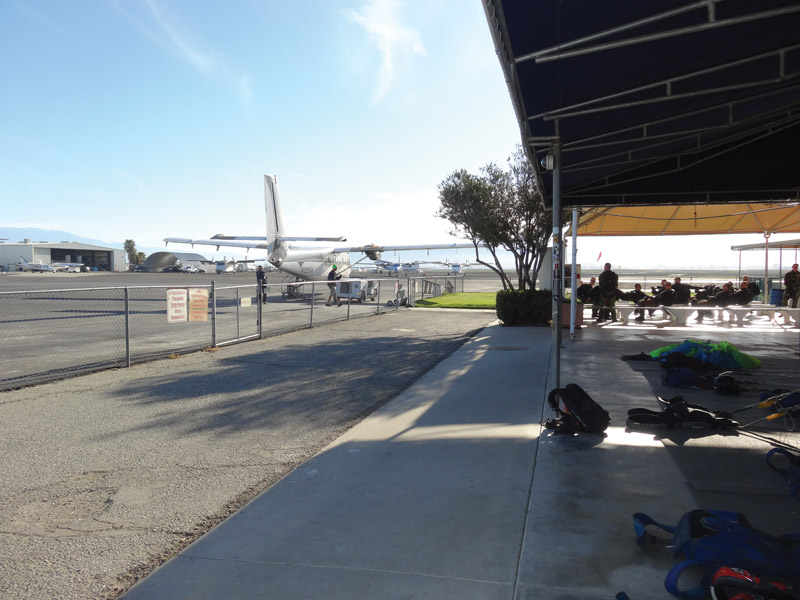 Some of the facilities at Skydive Perris with one of the three Twin Otters the school uses.

Bailing Out of Race Planes

There are two examples that I know of pilots bailing out of race aircraft. The lesser-known example is Gary Hubler’s pitch loop failure during a propeller test at his home airport. The story is that the elevator failed, and after attempting to fly the airplane with the remaining controls, he eventually decided to bail out at approximately 10,000 feet. This is the only example I know of a pilot bailing out of an IF1 racer. 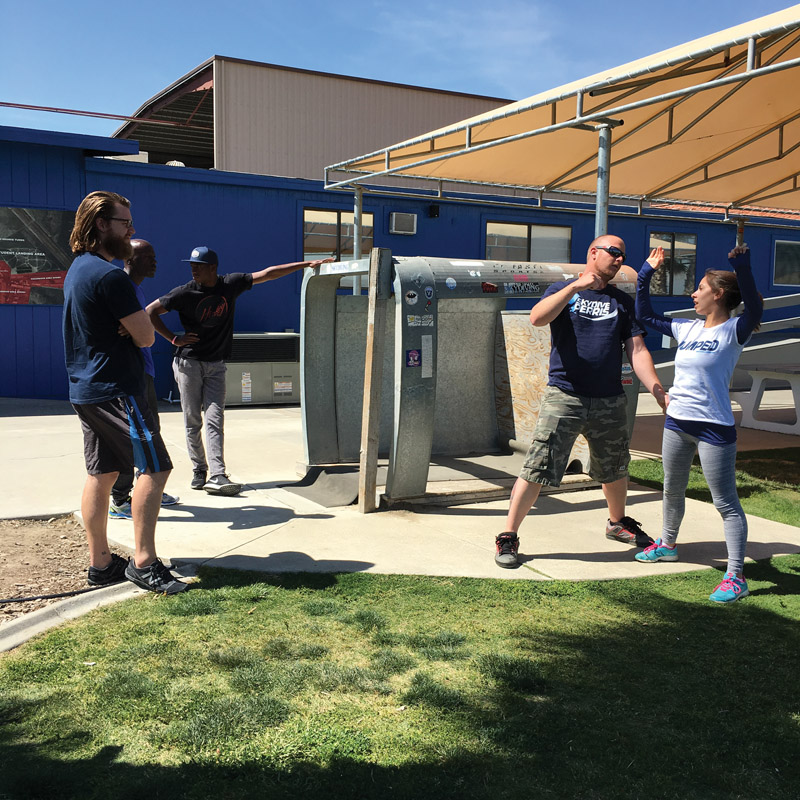 Josh Colby critiques a student on her arch while the class looks on. The aircraft mockup used for drilling exit procedures can be seen in the background.

The most famous example is Kevin Eldredge’s bailout of the Race One Super Corsair at the Phoenix 500 race in 1994. If you haven’t seen it, Scott Germain’s article on Warbird Aero Press is fantastic, and the video of the bailout is on YouTube. Scott’s article wraps up with a quote from Kevin about the importance of knowing your equipment, another reason to jump out of an airplane. 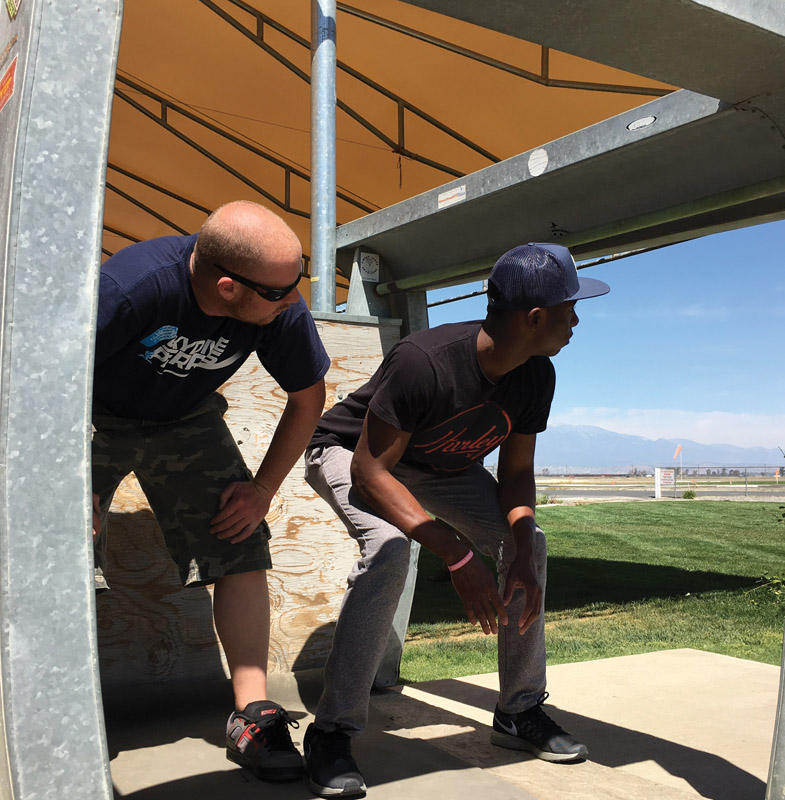 Josh Colby coaches a student on the process of exiting the airplane in the aircraft mockup. Much of this course relied on being coached through the motions of each phase of the jump with an instructor looking on. It’s a fantastic example of efficient training.

Len Fox had a very different bailout experience when he was doing spin testing in a Columbia 400. He had deployed the spin ‘chute, but when he tried to jettison the ‘chute, the release mechanism failed. Len’s report on this incident is available from the Society of Experimental Test Pilots. When I read the report I was fascinated by the decision-making involved. A spin that requires a spin ‘chute is already a pretty bad day. Not being able to jettison the spin ‘chute after all that is rotten luck. The idea that, based on descent rate, a pilot would need to establish whether or not a landing could be attempted with the extra drag of the parachute was a new thought experiment for me. But the most interesting things about the report are the candid descriptions of Len’s thoughts through the incident. It was another reminder that even in the best case (stable airplane without a fire and all aircraft systems functioning correctly), bailing out is serious business. And like most things in flight test, we should do everything we can to stack the deck in our favor. 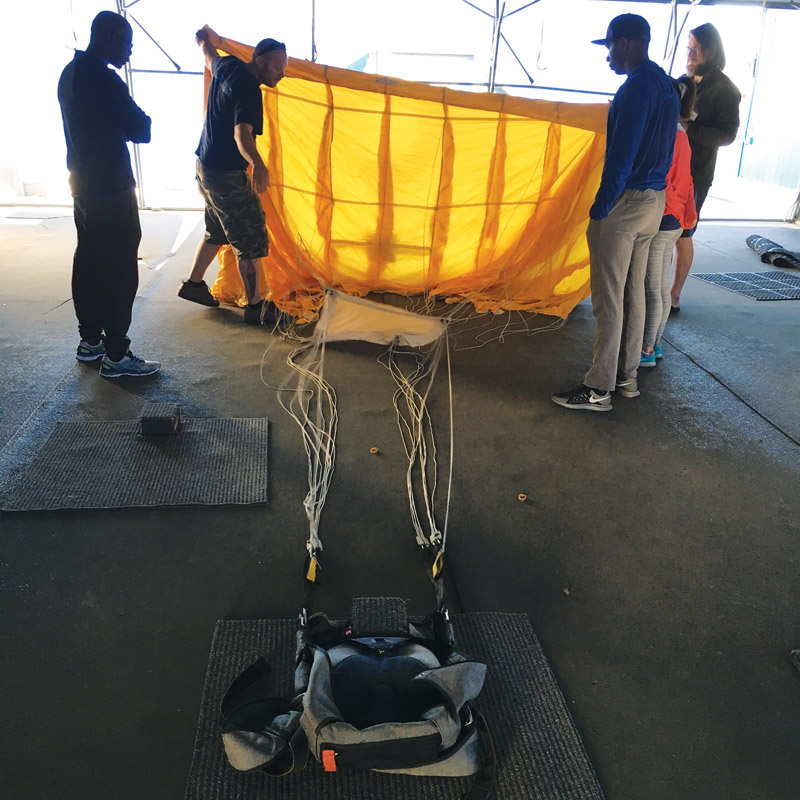 Another fantastic hands-on demo. Josh Colby grabbed a parachute off the rack and deployed it in the repacking room, then walked the class through each component and stage of deployment.

It’s Not About Adrenaline

When you tell someone that you are a test pilot for a living, the most common response is, “You must get quite a rush doing that.” For me, flight test is not about adrenaline. I find the effects of adrenaline are all counterproductive in a test environment. The adrenaline culture is a big part of the perception of skydiving. But it wasn’t until I got to the school that I realized that managing the effects of adrenaline is also a big part of skydiving, and even more so skydive instruction. 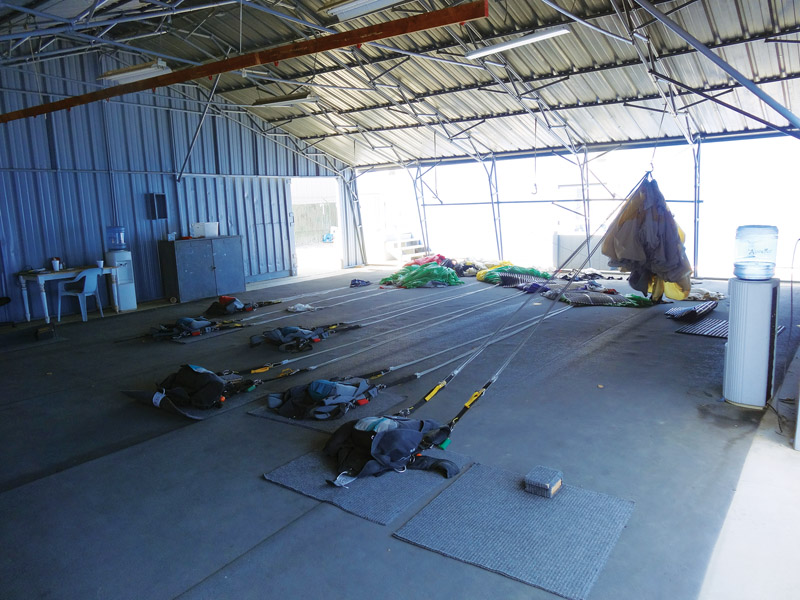 Josh talked about first time jumpers “blacking out” and “going to lunch.” It was a great reminder for me that the “tunneling” I personally consider the biggest threat to my ability to do my job (maintain situational awareness and report the details of the flight after landing) is not so much related to data saturation but to your brain dropping tasks because of the focusing effects of adrenaline. In the way that only an X Gamer can simplify something as complicated as a kickflip (a skateboard trick involving rotating the skateboard in two axis) into a simple word, the consistent message at Perris was “chill,” combined with a slack flopping hand gesture that communicates the same thing to a student in free fall. It fascinates me that while I had identified this loss of situational awareness as the biggest risk to my livelihood (both physical and economic), I had only figured out half of the way I could combat it. Since the first flight of my Cassutt, I have spent considerable effort exposing myself to similar experiences to those I hoped to have one day as a professional test pilot. I had not considered working to actively control my resting anxiety, cutting the adrenaline off at the valley rather than the peak. Fascinating. 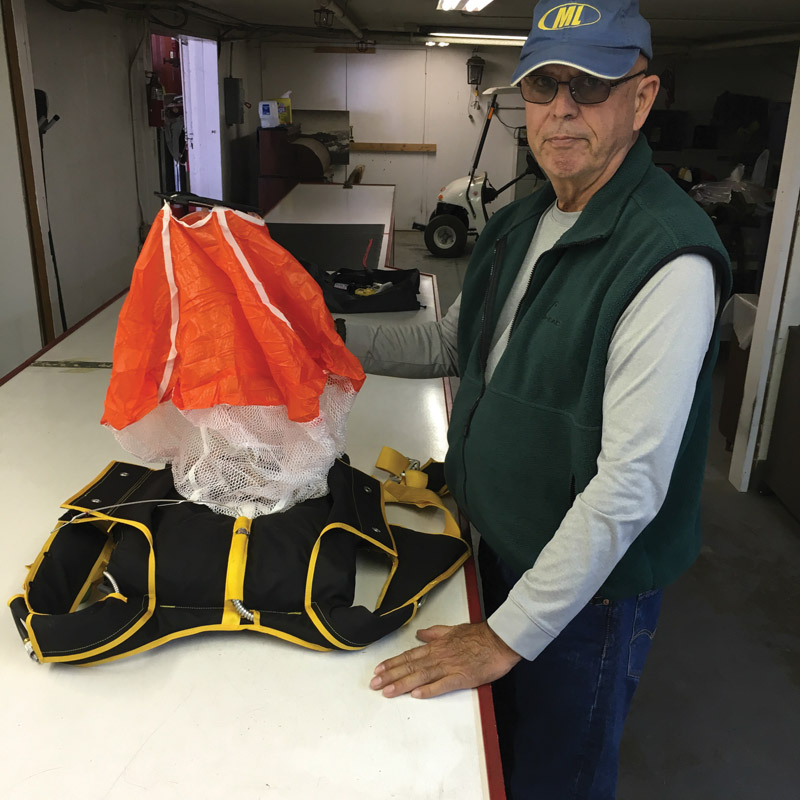 Two times in my flight test career I have considered bailing out of an airplane: once in the Wasabi Siren and once in Lynn Farnsworth’s Miss Karen II. In both cases it was related to smoke and associated fire. By definition, fire is an in-flight emergency with extremely short time available to respond. In both cases, while considering the decision to bail, I was profoundly aware that shortly after that decision, I would be experiencing free fall for the first time. Would I be able to find a stable body position? Or would I be so disoriented by the associated tumble that I wouldn’t be able to deploy the parachute? The concern was significant enough that I felt a hesitation to jump; in this business, a hesitation like that can mean the pilot never makes it to the door. The accelerated free fall course was a cheap and easy way to dramatically change this equation. This is good work that we do, cold and unforgiving but good. 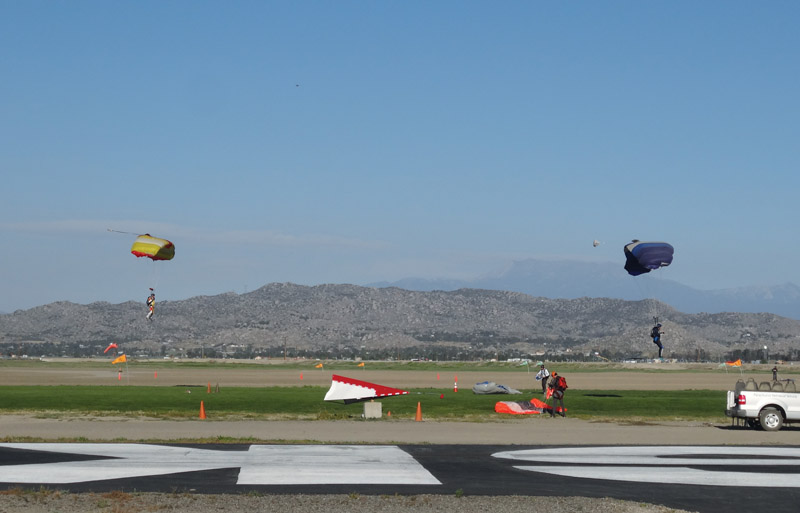 Skydive Perris is a busy jump zone with what seemed like a constant stream of people falling out of the sky and jump planes taking them to altitude. With the restaurant/bar and pool complex well situated, one could make a day out of watching the school function.

Elliot Seguin is a homebuilder, engineer, and test pilot based at the Mojave airport. He is a member of the Society of Experimental Test Pilots, and each year he competes in Wasabi, the IF1 racer he designed, at the Reno National Championship Air Races. Elliot is currently a test pilot for Mooney International on their new protoype.