A normal takeoff, particularly in an airplane with tricycle landing gear seems to be a relatively simple maneuver. The pilot throttles the engine up to takeoff power, uses rudder to track the runway centerline, and then rotates the airplane gently nose-up, bringing the wings to a positive angle of attack once the airplane has accelerated to takeoff speed. In fact, takeoff is a bit more complex than that, and problems can arise if the combination of landing gear geometry, thrust line, center of gravity and elevator control power is not right.

There are at least four unconventional homebuilt prototypes that have had nasty accidents as a result of takeoff issues or inadvertent liftoffs during high-speed taxi testing.

As an airplane accelerates down the runway for takeoff, the pilot must lift the nosewheel off the surface and rotate the airplane into takeoff attitude. For a smooth takeoff, this must be achieved at a speed just below liftoff speed. FAR part 23 requires the elevator to be able to lift the nose wheel at 85% of the gross weight stall speed.

As the nosewheel lifts and the angle of attack increases, the wings begin producing lift, decreasing the load on the main gear. As the airplane rotates, the center of gravity moves aft relative to the contact point between the main wheels and the ground. Both of these effects reduce the nose-down moment caused by the upward force of the wheels on the runway. As a result, the amount of elevator required to hold the nose up decreases.

Throughout the rotation, the pilot adjusts the elevator deflection to capture and hold the liftoff attitude. When done properly, the plane’s weight gradually shifts from wheels to wings. At liftoff, that weight shifts entirely to the wings, and the airplane flies away. The airplane is in trim when it lifts off and climbs away smoothly.

If the main landing gear is too far behind the center of gravity and there is too much weight on the nosewheel, the pilot may not be able to rotate the nose up until the airplane is travelling faster than minimum liftoff speed. Several pusher homebuilts have suffered from this problem. It contributed to the fatal crash of the Dean Delt-Air 250 delta wing prototype in the 1960s, and was also reportedly a problem for the Prescott Pusher.

The difficulty pusher designers face is that the plane’s center of gravity moves a long way from empty to fully loaded. If the main gear is far enough aft that the airplane does not tip over backward when empty, then the load on the nosewheel tends to be too high for smooth takeoff rotation when loaded.

In this situation, rotation and takeoff becomes difficult to control. The pilot will likely be holding full-up or nearly full-up elevator trying to initiate takeoff rotation. When the nose finally does start to come up, the airspeed is high enough that the lift caused by the increasing angle of attack on the wing rapidly offloads the wheels. As the wheels unload, the nose-down moment quickly decreases, resulting in a rapidly increasing nose-up pitch rate. To compensate, the pilot must reduce the pull on the stick, or in extreme cases, actually push to check the pitch rate and keep the airplane from overrotating.

To fly such an airplane, a pilot must first pull lots of up elevator to unstick the nosewheel, then push on the stick to arrest the nose-up pitch rates. This maneuver is hard to do precisely and makes a safe, smooth takeoff difficult.

Failure to execute this tricky maneuver can lead to two nasty scenarios.

The first occurs if the pilot does not arrest the nose-up pitch rate and capture the proper takeoff pitch attitude. The airplane lifts off with the nose pitching upwards, and the airspeed decaying. This is a rapidly deteriorating situation that can quickly lead to a stall and loss of control if the pilot cannot quickly stabilize the attitude of the airplane after liftoff. 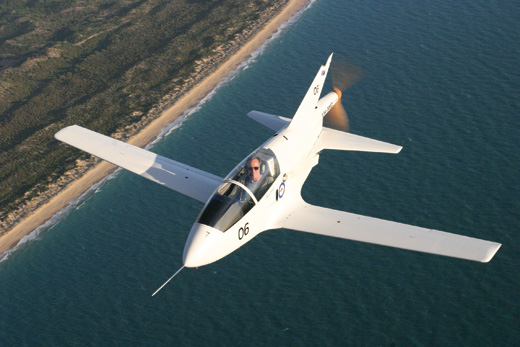 The BD-5 suffered from a PIO problem, potentially worsened by sensitive controls.

The second difficult scenario happens if the pilot pushes too hard to try to arrest the nose-up pitch rate after takeoff. The airplane may respond to the hard push on the stick by nosing back down towards the runway, causing the pilot to pull again to keep the airplane from hitting the ground. This situation is difficult to control. In some cases, particularly if the airplane has relatively light pitch forces, it can lead to a dangerous low-altitude pilot-induced oscillation (PIO). The BD-5 suffered from this problem, which was exacerbated by very sensitive controls. There were several fatal BD-5 accidents that started as a PIO on takeoff.

If the nosewheel cannot be lifted at well below stall speed. takeoff can be difficult and even dangerous. It is particularly dangerous if this situation is encountered in early flight test.

Reading accident reports about Experimental prototypes that had “hop-off” accidents shows a common thread. Test pilots noted the inability to rotate in taxi test, and then rapid, sometimes drastic means were used to try to fix the problem. Two such dangerous “fixes” are common.

The first is to try increasing speed to find rotation speed. This is reasonably safe as long as the speed is kept well below stall, but some pilots have made the mistake of accelerating significantly faster than stall speed while holding full-aft stick trying to rotate. In at least one case the pilot was pulsing the stick fore and aft to bounce the nose upward to initiate rotation. At that high speed, if the airplane does start to rotate, things happen fast, and loss of control is likely.

The second dangerous response to a nosewheel liftoff problem is to ballast the airplane to move the CG aft. This destabilizes the airplane and if overdone can make the airplane unstable. It is possible that the ballast will make it possible for the pilot to rotate the nose up, only to find himself airborne in an unstable and possibly uncontrollable airplane.

Luckily there are a few warning signs to look out for:

If full-up elevator does not lift the nosewheel at a speed no greater than about 80% to 90% of the expected stall speed, discontinue your attempt to rotate until you understand the situation and can safely correct it. Do not exceed stall speed under any circumstances until the situation is remedied.

If the nosewheel fails to liftoff during your attempt to rotate during a high-speed taxi test, neutralize the elevators before pulling the throttle back. If the rotation problem is caused by a high thrust line, a sudden loss of thrust may cause an unexpected rotation and liftoff that you may not be able to control.

Do not “pulse” the stick to try forcing the nosewheel to lift off. Pulsing the stick sets up a dynamic situation where things can happen quickly. If a pulse does successfully unstick the nose, it is likely the airplane will rotate nose-up rapidly, hopping into the air with a large nose-up pitch rate and likely taking you by surprise. This situation may be difficult or impossible to control, and has caused at least one serious (fortunately not fatal) accident.

Inability to rotate for takeoff can be a frustrating problem to encounter in early testing. Safe modifications to fix the problem usually involve changes to the geometry or position of the landing gear, and can be difficult and time-consuming to implement. It is tempting to try to push the situation to get in the air, but this can be dangerous. As with all flight testing, patience can save your life.

Ron Alexander - December 17, 2008
0
Taping curved areas is essential if you want to keep them smooth, and the same goes for inspection rings or gussets. This month, we walk you through the process and help you iron out any problems; by Ron Alexander.