I got really close to a ground loop for the first time back in 2008. I was taxiing my little green Formula One racer from the runway to the taxiway at Mojave just a few short weeks before Reno. As my quartering Cassutt tail was presented to the day’s winds, a gust grabbed the airplane and the nose began to slice. Applying full opposite brake, I was able to stop the nose halfway through the ground loop, but all that toe pressure made those Grove brakes grab so hard, the airplane came up on the main gear for a prop strike. As the tail was coming up, I swatted the magneto switches off, stopping the engine just short of propeller contact. I had successfully put off my first ground loop for another day a thousand flight hours later.

My current Formula One racer, The Wasabi Siren, is an airplane we designed for a very specific mission. Like all airplanes, the mission helps the designer make the many design trades that become the airplane. In the case of Wasabi, we decided during the design phase that we wanted the airplane to have more natural aerodynamic stability than we had found in other race airplanes. The theory was that the drag associated with forward CGs and large tail feathers would be less than the performance that comes with a confident pilot. The result was a large horizontal and vertical tail. 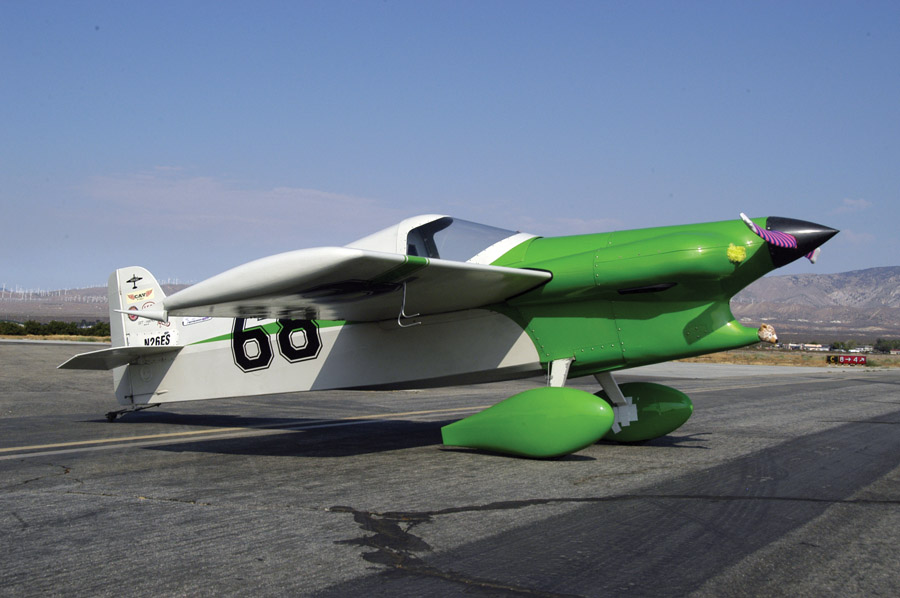 This gave the airplane another advantage on the Formula One racehorse standing start, allowing us to raise the tail immediately after the flag dropped, fairing the wing into the wind and leveling the propeller to the runway. We found during testing that the powerful elevator would also allow the pilot to hold the tail off the ground late into the landing roll. Wasabi has a significant forward visibility problem, so having the tail up longer meant the pilot would spend less time blind on the runway. With all this good news we should have known there would be a compromise in there somewhere.

The problem showed up after several weeks of very high winds in Mojave. Here in Mojave, we make it a point to clear the crosswind and total wind envelope of the airplane as soon as possible, because otherwise, you wouldn’t be able to test. We were testing the airplane on the first calm day in several weeks of testing with a lot of surface winds. I was rolling down the runway, working the brakes so that I could roll as close to the end of the runway as possible with the tail up, saving the blind three-point taxi. There was a directional upset (a gust of wind), and I punched a rudder pedal to correct, but there was no response; the rudder moved but had no effect. Without aerodynamic rudder available I moved to the taildragger pilot’s backup—brakes. 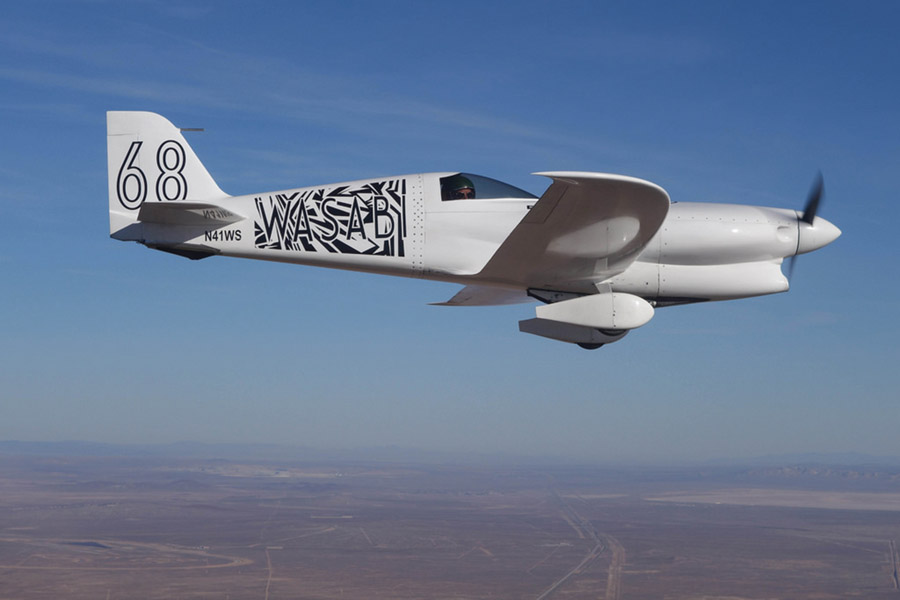 Elliot in the Wasabi Siren on a test flight over Mojave. (Photo: Phil Chambers)

At this point in the landing, after the delay of trying the rudder, the remaining brake was now not enough to stop the ground loop. Therefore, at the last minute with the runway boundary approaching fast, I grabbed up elevator and without much grace slammed the tailwheel into the concrete to stop the sweeping nose. Then I released both brakes and reapplied the needed brake, turning the airplane away from the weeds. I had yet again successfully held off my first ground loop for another day. 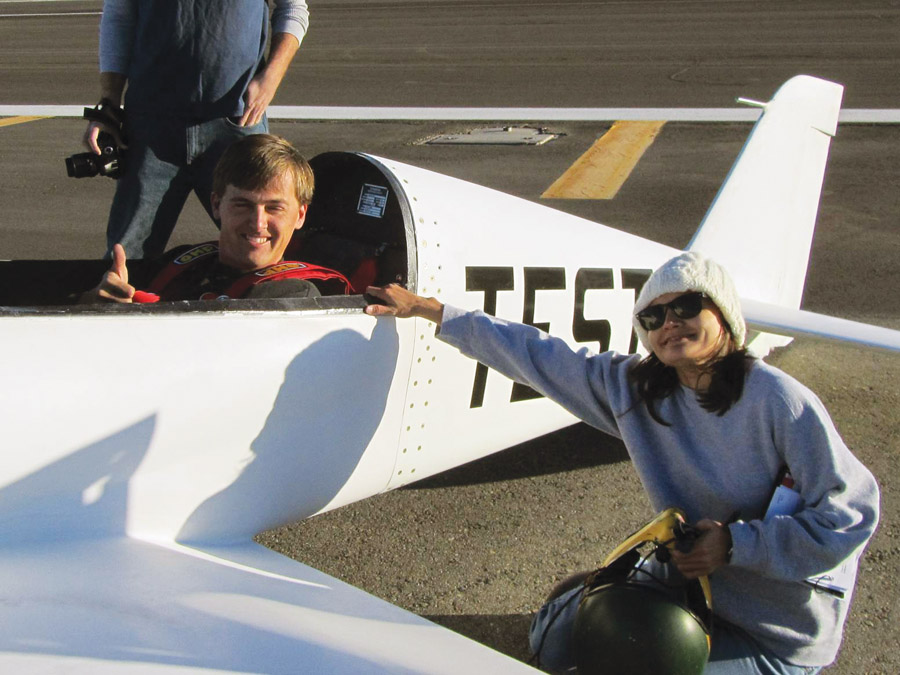 Elliot and Jennifer Seguin celebrate after the first flight of the Wasabi Siren, an air racer designed to have greater than average stability. (Photo: Mark Bassett)

Later, as these things happen, I was sitting in the hangar, working through the event and trying to figure out how I had been surprised by this handling corner in the airplane. The biggest difference was the wind. Like most taildragger pilots, I need a really good reason to look in the cockpit from the beginning of the flare until the airplane has slowed to taxi speed. With Wasabi’s light control forces, the only cue for the pilot about the amount of power left in the rudder is groundspeed. Because the winds were calmer than they had been recently, my groundspeed was higher than it had been for a given airspeed. That meant in terms of airspeed (and therefore control power), I was holding the tail up way later into the landing roll than I ever had before without knowing it. The only thing worse than opening the envelope of an airplane without knowing it is doing so when you are approaching a handling cliff that you don’t know is there. Luckily, we got away with it.

Fast forward five years to another program on the same runway at Mojave. This time, instead of a Gold Class Formula race plane, I was flying a two-stroke Mini-Max ultralight. During initial taxi tests Wasabi test pilot Justin Gillen and I had noticed a similar behavior to that of Wasabi in the Mini-Max. The elevator was capable of holding the tail up beyond the rudder being able to center the airplane. Two flight hours into the program, we were finalizing engine-out landing procedures for the airplane to arm the test team against the risks of an unproven (relative to a Ly-Con-built Continental) Zenoah two-stroke. The risk with a dead-stick in an ultralight is that high drag and low inertia means an unprepared pilot will stall before they have flared enough to stop the vertical speed, resulting in a hard touchdown. Therefore, you need to artificially increase the approach speed without power in order to have enough energy to stop the vertical speed before the stall. 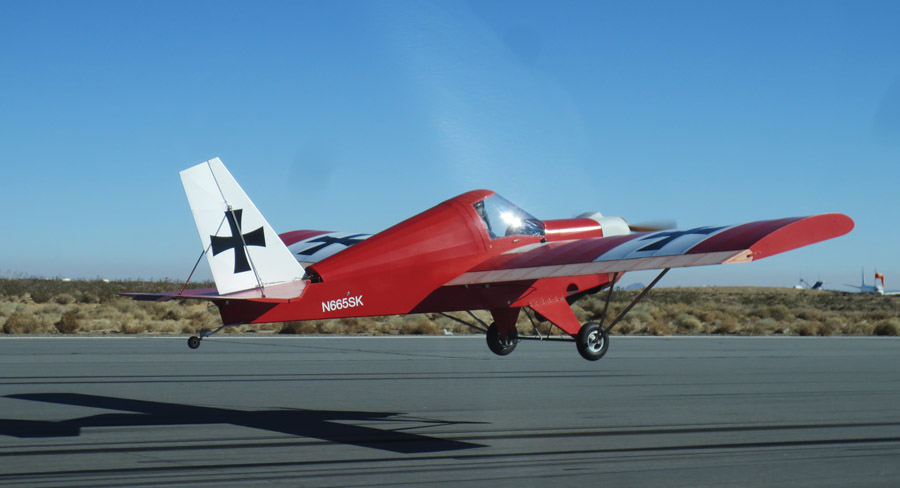 The Mini-Max was Elliot’s first ground loop. A combination of a large horizontal tail, a small vertical tail and no differential brakes added up to an exciting end to a test flight. When the airplane escaped damage, we were able to chalk it up to a learning experience. (Photo: Justin Gillen)

I had done four or five simulated dead-stick landings using less and less power to flare the airplane. The landings were getting better, and I was getting confident. After a particularly good landing, I held the airplane up on the mains using the elevator as I rolled out. There was a directional upset to the right, I punched left rudder, but it was too late (airspeed too slow) for the rudder. I flashed back to Wasabi and lowered the tail to get some stability off the purchase of the tailwheel. Unlike Wasabi, the Mini-Max has a very nice steerable tailwheel. Unfortunately, so late in the ground loop, the springs in the tailwheel linkage were not stiff enough to stop the slice of the nose. Then came the kicker: As my anxiety rose, I felt the tips of my toes searching for something…brakes.

Unlike Wasabi’s hydraulic aircraft toe brakes, the Mini-Max has a single mechanically actuated brake handle on the control stick, which by this point I had already deployed. There was no way to differentially grab the brake I needed and stop the slice. I was out of ideas, the timer had run out, and so it was that I had my first ground loop. The homebuilder in the sky must have been looking down that day because I neatly fit between two runway lights, and there was no damage besides my ego. 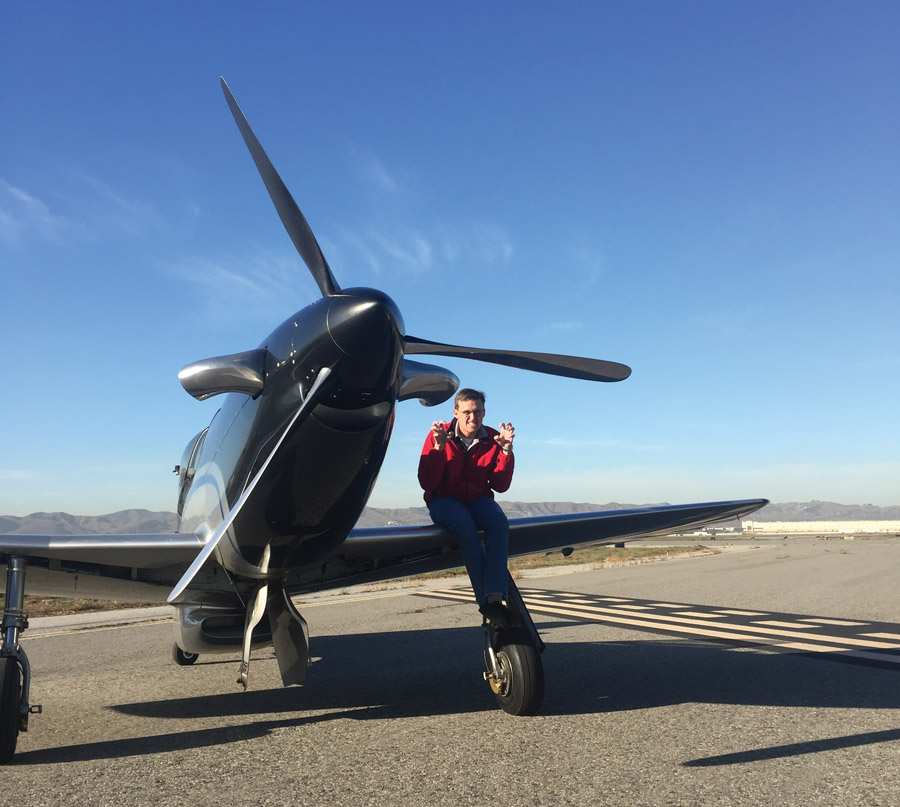 Elliot’s first intentional ground loop. The combination of a flat brake and plenty of idle thrust resulted in a corner that could only be escaped with a forced ground loop. After pushing the airplane off the runway, Elliot waits for the tow truck. (Photo: Jim Rieger)

Taxiing back to the hangar, I spent a lot of time thinking about how a taildragger uses toe brakes. They are the strongest weapon to a taildragger pilot, and we save them to use last, an efficient use of resources. Unfortunately, this means if you don’t have differential brakes, your response to a directional upset must be much more aggressive with the rudder you do have to save it soon enough.

My first intentional ground loop came six months later in a turboprop Thunder Mustang. The airplane had just come out of storage and Wasabi Air Racing was tasked with going through the airplane to get it flying again. On short final, the landing was going as expected with the throttle sitting on the idle stop. At the idle stop, the engine makes about 100 hp worth of thrust. This thrust can be attenuated by rolling the engine into beta, but doing so blanks the tail, so we wait until the tailwheel is on the ground to apply beta.

As the tailwheel came down, I started to tickle the brakes, and the left brake went to the floor—nothing there. Without a left brake I waited to select beta in order to preserve aerodynamic rudder control as long as possible. At roughly 40 mph, the airplane stopped decelerating due to the thrust of the idling engine, so I selected beta. As soon as I did that, the nose started a slow but steady track to the right toward the ditch. As the airplane reached 20 mph, the left rudder was buried, and the nose was still tracking right toward the weeds. It was now only a matter of time before I was looking for a crane to get the airplane out of the ditch.

I only had one option left—the intentional ground loop. I pushed the stick full forward to unlock the tailwheel and buried the right brake. The airplane ground looped but more importantly kept clear of the ditch. I shut down the engine on the runway and informed the tower I would need a tow truck, but not a crane. This is important work that we do, cold and unforgiving but good. 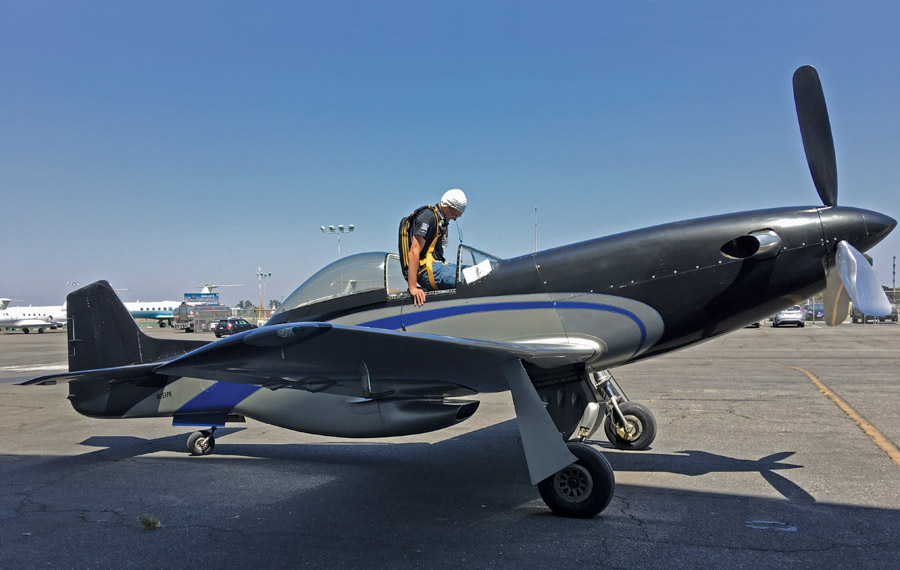 Elliot straps on the Walter-powered Thunder Mustang for a test flight at Chino. The combination of a tailwheel and a lot of idle thrust made this airplane a particularly fun transition. Later when the brake failed on landing, the weight of those design compromises could be fully seen. (Photo: Tyler Knight)

Elliot Seguin is a homebuilder, engineer, and test pilot based at the Mojave airport. He is a member of the Society of Experimental Test Pilots, and each year he competes in Wasabi, the IF1 racer he designed, at the Reno National Championship Air Races. Elliot is currently a test pilot for Mooney International on their new protoype.