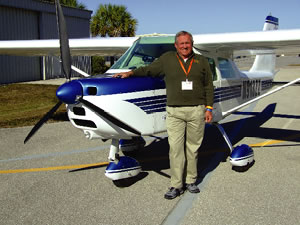 By far the majority of Special (factory-built) Light Sport Aircraft (SLSA) sold in the U.S. are of foreign manufacture. Most are from Europe, but the Jabiru line is from Australia, and the Cessna SkyCatcher to begin deliveries later this year is built in China. Several of the FAA-approved SLSAs are from South America, including our subject this month, the Paradise P-1 from Brazil.

Like most companies producing recreational aircraft, Paradise Industria Aeronautica Ltda. of Vera Cruz, Bahia, Brazil, began with the dream of its founder. At age 7, Noe Oliveira knew that he wanted to design and build airplanes, and by 1985 he had begun to achieve that goal. Recently adding 75,000 square feet of manufacturing space, the company now produces the 180-horsepower, four-seat P-4 and the 150-hp P-2S.

Oliveiras seventh design, the P-1, was intended as an Experimental/Amateur-Built project with a maximum gross weight of 1650 pounds. More than 70 Paradise P-1s have now flown in Brazil-the first of them for more than seven years. For acceptance as an American SLSA, maximum gross weight has been reduced to 1320 pounds, the legal limit. At the P-1s standard 815-pound empty weight, there is still room for full fuel (25 gallons total in two wing tanks) plus 359 pounds for two people and baggage.

The cockpit is unusually large-43.3 inches wide-with a cavernous (30 cubic foot) baggage space that accommodates up to 75 pounds. One wonders if the airplane was originally intended for four people, as was the case for at least one other SLSA, the Jabiru J230. (LSA rules limit occupancy to two persons.)

All-metal construction begins with a welded 4130 steel-tube fuselage that is covered with aluminum sheet. The 29.7-foot wing and relatively tall sitting height make the airplane appear larger than many other LSAs. A stabilator controls pitch. Power is from a Rotax 912ULS, the 100-hp four-stroke engine from Austria.

Inside, the carpeted and upholstered cockpit achieves its intended look of a high-end automobile. Easily removed standard leather seats, a pair of beefy looking panel-mounted carbon fiber yokes and a smoothly sculpted lower center console with its turned-aluminum T-handle throttle complete the functional high-quality look and feel. The center console supports another feature seldom found on single-engine lightplanes: rudder trim, which is adjusted by turning a knob. Pitch trim and flaps are manual.

Standard equipment includes conventional round instruments, dual toe wheel brakes for ground steering and stopping, wheelpants, a parking brake and easily removed doors. Also standard are a panel-mounted intercom, running lights and a landing light. Sport Pilots-the primary market for LSAs-cant fly as pilots at night, but the lights should add to resale value in addition to allowing those with higher-class licenses to operate after dark. Three-color paint, sun visors and a Warp Drive ground-adjustable propeller with a color-coordinated spinner are also standard. 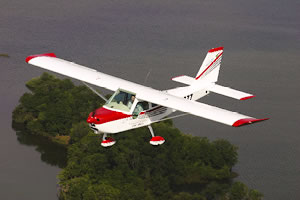 Checking out in the P-1 was easy for those attending this years LSA Expo in Sebring, Florida. Paradise USA, which imports the airplane, is headquartered at Sebring Airport in 15,000 square feet of hangar and office space near the airports terminal.

I flew with Neal Salmi from Thompson, Montana, and was the guest of sales manager Chris Regis and Paradise USA manager Paulo Oliveira (no relation to the founder). This P-1 had flown earlier in the day, so we skipped the Rotax 912 burp the baby routine used before the first flight to measure oil quantity. Following a walkaround preflight, I settled easily into the right front seat. Getting aboard the high-wing P-1 is particularly easy, especially with its yoke control. There’s no need to hoist a leg over a joystick.

As usual, the Rotax 912 started immediately upon key twist, and after a brake check we taxied for the LSA runway. Ground handling is conventional, and visibility forward is especially good; I could see the taxiway directly ahead despite my short sitting height and without benefit of a seat cushion.

After pre-takeoff checks, Salmi added power and we were airborne quickly, climbing at somewhat more than the 800 fpm book value because our gross weight was below maximum. Taking the controls, I could tell immediately that pilots-even those lacking experience in lightly wing loaded airplanes such as LSAs-would feel comfortably quickly. Many recreational pilots prefer sticks to yokes, but smooth, solid (rather than light) handling combined with good balance between roll, yaw and pitch axes make the P-1 a delight to fly.

My regular short list of checkpoints indicated that the partial-power departure stall (with a warning buffet and docile recovery) occurred at 42 knots. Roll rate at a moderate cruise of 88 knots was 2.5 seconds through 90 of roll (from 45 one way to 45 the other way). Thats close to average for LSAs. Hands-free pitch damping indicated positive stability as required by LSA standards. Slow flight was comfortable at all four of the flap settings (0 to 40). In the full-flaps position, at 3000 engine rpm, airspeed indicated 39 knots. To get slower than 56 knots, we needed yoke back pressure in addition to full aft pitch trim; it could use more trim authority.

Clean and dirty approach stalls were next on the list. Clean stall speed-the one required for LSA qualification-was at 44 knots indicated. Higher gross weight would have gotten us to the 45-knot limit, at least with this particular airspeed indicator.

Maximum speed we saw was 108 knots at full power, but the ground-adjustable prop was pitched too coarse to allow the Rotax to wind up to its maximum continuous power (95 hp at sea level at 5500 rpm). We achieved only 5200 rpm.

The cockpit is quiet (there’s insulation), and comfort is enhanced by the good visibility. I like the low door windows for the view down. 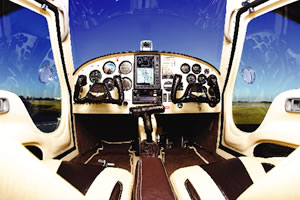 The recently approved hand control in Dylan Redds P-1 allows him ground handling of the plane without the use of his legs.

Back in the 400-foot-high LSA runway pattern (avoiding higher traffic for the main runway), we approached at 88 knots and slowed to 57 on short final. The landing was comfortable, as was the entire flight experience in the P-1. The airplane feels as solid in the air and on the ground as it looks. Despite the possibility of an easy transition for pilots used to heavier craft, however, I agree with the LSA industry recommendation to get a minimum of 5 hours of transition instruction before flying any of these aircraft as pilot in command.

As this was written, the P-1 base price in Florida was $108,830 including the standard items. For practical flying you would need additions such as an Icom transceiver and Garmin transponder plus an ELT. The approved GPS receiver is a Lowrance 2000C, but other handheld or yoke-mounted units could be used instead. (SLSA rules preclude fixed installation of equipment other than units approved and tested by the airframe manufacturer or importer.)

Regular options include substituting a Dynon FlightDEK-D180 EFIS/engine monitor for some flight and engine instruments, a TruTrak DigiFlight IIG autopilot, and cabin heat.

The FAA approved one other option the day before my flight: Lacking the use of his legs, P-1 owner Dylan Redd from Atlanta will be taxiing and flying his airplane using a twist-grip T-handle in the center console. Replacing the throttle, the T-handle controls rudder and ground steering with fore and aft motion, and controls throttle by twisting the handle. (Redd assured that I got this correct, though it sounds backward.) He had earned his Sport Pilot license four months before we met.