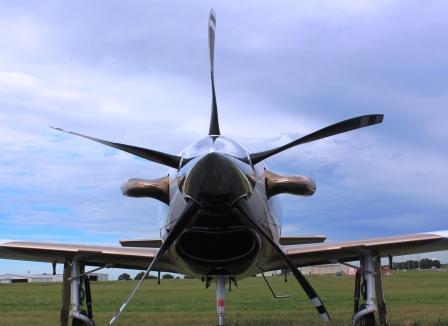 The new technology 82.5-inch diameter five-blade propeller is available as an optional performance upgrade in place of the four-blade Hartzell aluminum propeller that is standard equipment on the Turbine Evolution. In addition to new aircraft kits, the new carbon fiber propeller is available as an upgrade for the 65 Turbine Evolutions flying today. Even though the new propeller has one more blade, it is 3.5 pounds lighter than the standard propeller including spinner and de-ice.

On Display at Oshkosh

“Much like the Turbine Evolution itself, modern propeller technology, advanced manufacturing methods and advanced aerodynamics combine to bump the airplane’s speedy performance to the next level,” said Hartzell Propeller President Joe Brown. “With Hartzell’s true carbon fiber propeller blades and the Turbine Evolution’s all carbon fiber airframe, this legendary high-performance aircraft goes even faster and has an even better climb rate.”

The new five-blade Hartzell carbon fiber prop will be displayed on a Turbine Evolution aircraft during AirVenture at the Evolution Aircraft exhibit booth 275-276 in the Main Aircraft display area. Hartzell Propeller will also exhibit its other composite technology props, including a swept-tip Trailblazer prop at its exhibit booth 296-297.

For more information on Hartzell Propeller, go to www.hartzellprop.com.