This is the third and final article that explores the art and science of terminating wires. The first article discussed mechanical crimps that strive for a “gas tight” connection between wire and terminal. The second article discussed joining of wires by soldering.

Crimped joints are simple, convenient and perhaps less demanding; soldered joints are functionally equivalent. Enthusiasm for crimped terminations has prompted poorly deserved criticisms of the soldered connection. For example: “Crimping is preferred to soldering because it’s hard to keep the solder from ‘wicking’ out under the wire’s insulation, making it vulnerable to breakage.” In fact, if solder does flow out of the joint onto the wire strands, the installer has simply used too much solder. It is also true that stranded wire is more flexible and less prone to vibration-induced failure than solid wire. Converting stranded wire to solid wire by filling voids between strands with solder is indeed counterproductive with respect to vibration immunity.

Flexibility of a wire is severely constrained when the strands are all soldered together at the joint. But consider this: Are the strands any more flexible when joined to a gas-tight junction by crimping? Both soldered and crimped joints force a stranded wire to become quite solid. Any flexing of the wire in the immediate vicinity of the joint induces a lot of stress on individual strands. If the wire is going to fail due to vibration-induced stress, it will do so right at the transition between the joint and the free strands. It matters not whether the strands are constrained in a soldered or crimped joint. 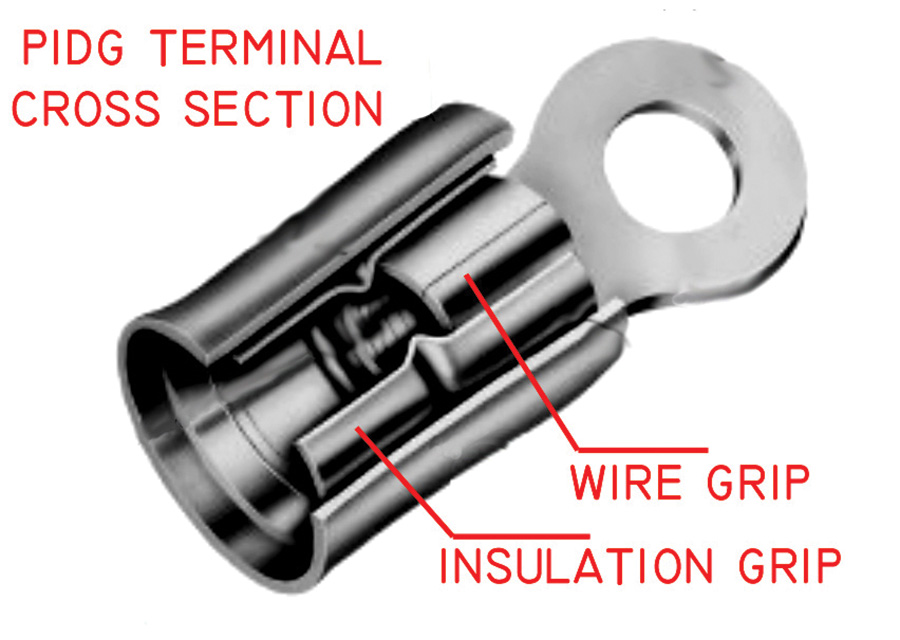 In Part I of this series, I spoke to a feature of insulated crimped terminals called the “insulation support.” The single-stroke terminal installation tool puts two crimps on each installed terminal (Fig. 1). One crimp is on the “wire grip” barrel, where a gas-tight connection is made between wire and terminal. The second crimp is further back on the “insulation grip” area, where the terminal’s insulator is deformed to support the wire’s insulation. 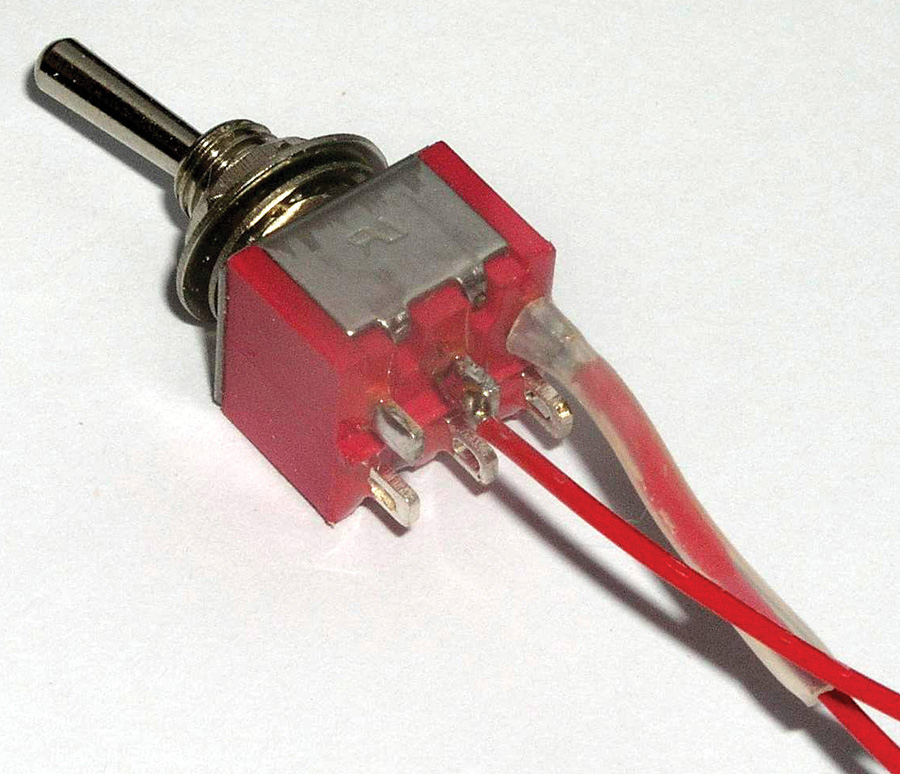 This feature is easily added to joints at solder lugs. Heat-shrink tubing applied over the joint and extending a half-inch or so onto the wire adds the recommended support (Fig. 2). 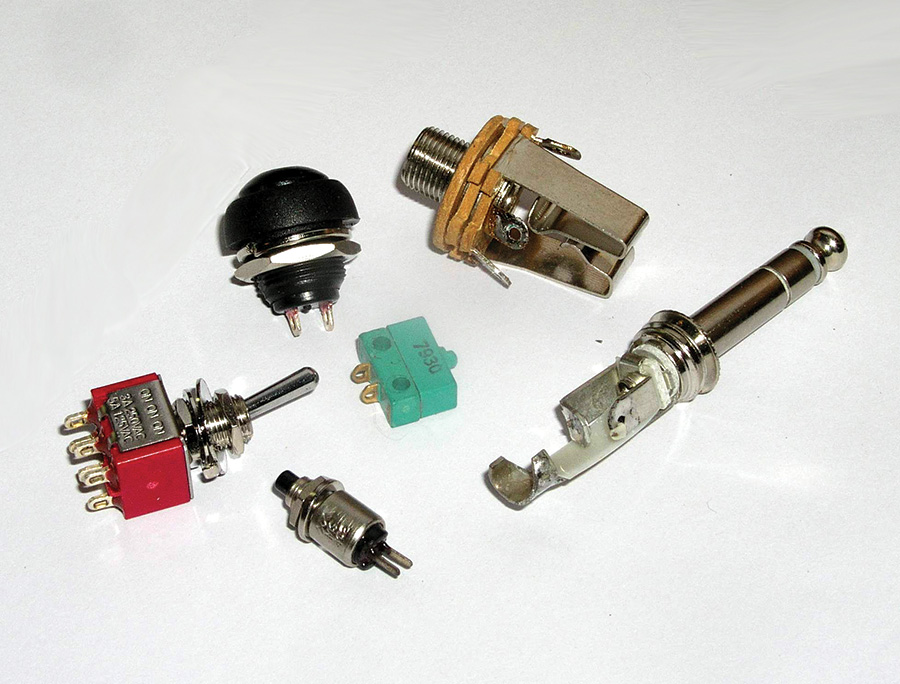 Most owner-built-and-maintained (OBAM) aviation projects will have at least a few soldered connections (Fig. 3). These include, but are not limited to, headset and microphone jacks and plugs, miniature toggle switches and push buttons, and some full-sized toggle switches. 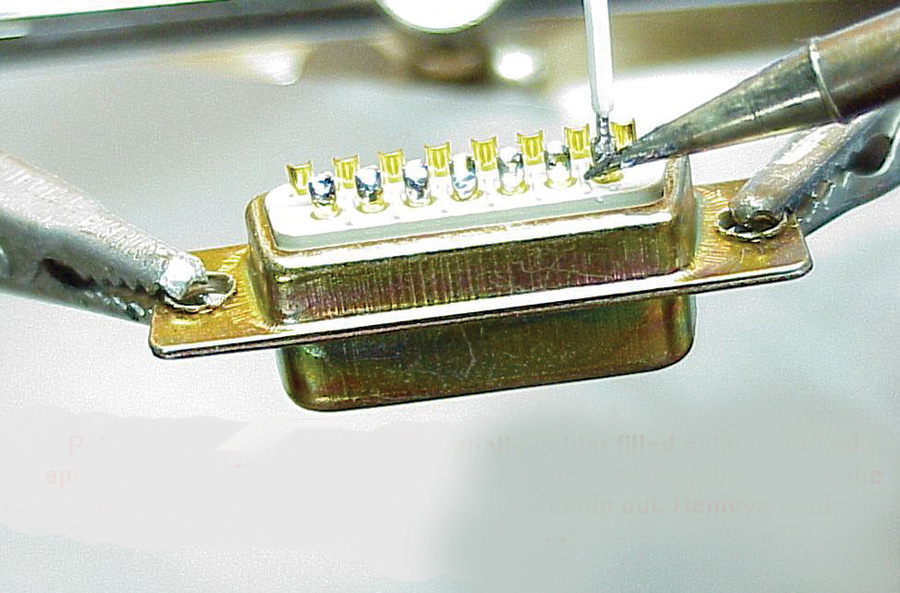 If you’re comfortable with the tools and processes, you might elect to use solder-cup D-sub connectors on your avionics (Fig. 4). They’re a whole lot less expensive than the connectors with removable crimped pins.

The TED 9-30-10 self-centering, coax tray connector (Fig. 5) used on many radios must be soldered. 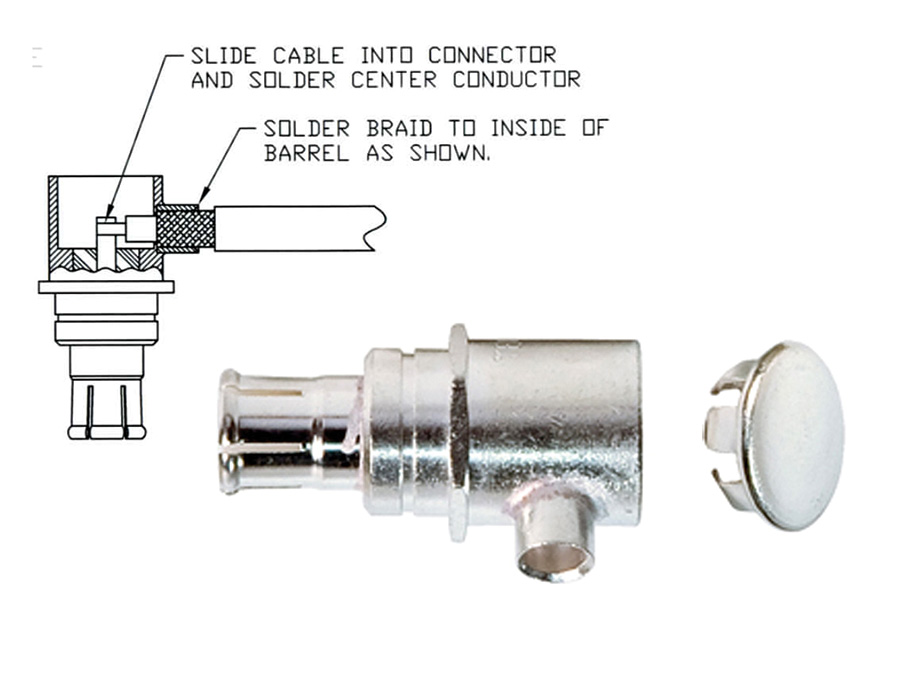 DIY electronics projects (Fig. 6) will no doubt assemble with solder.

In the factory environment, crimping is indeed preferred to solder. Crimp tools properly sized to terminals and wires are fast, semi-automatic, and low risk. On the other hand, a hot soldering iron is itself a risk for personal injury. Poor technique can produce bad joints or perhaps drip molten solder on the carpet (or into your shoe!). When soldering is the only option, here are a few tips for selection of tools and materials you’ll find useful. 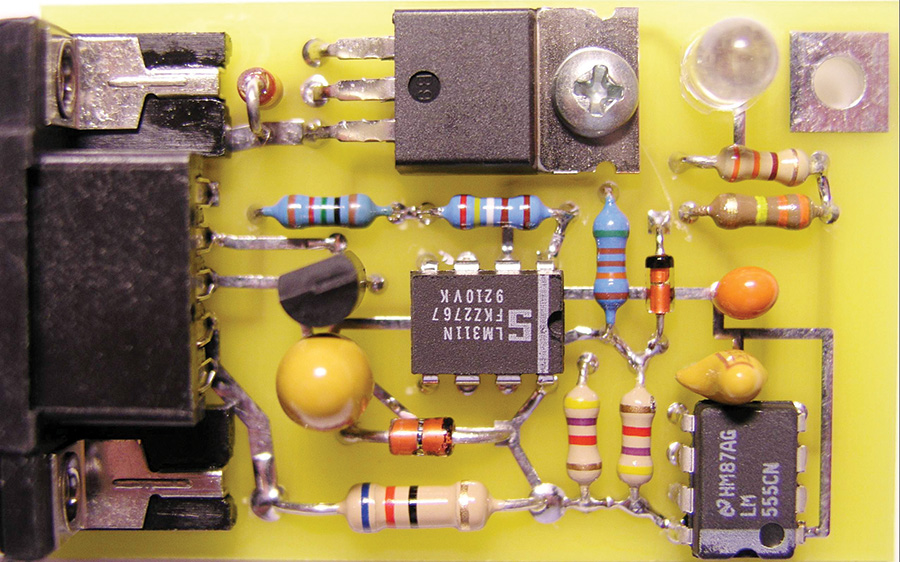 Let’s talk about solder first (Fig. 7). As I mentioned in Part Two, the solder of choice is 63% tin and 37% lead—or 63/37. Yes, the world is migrating away from lead everywhere, even when its presence has no significant effect on the state of the planet. However, due to problems with “tin whiskers” and greater tendency for joints to crack under vibration, high-reliability military and aviation systems are not yet making the transition to lead-free solders. 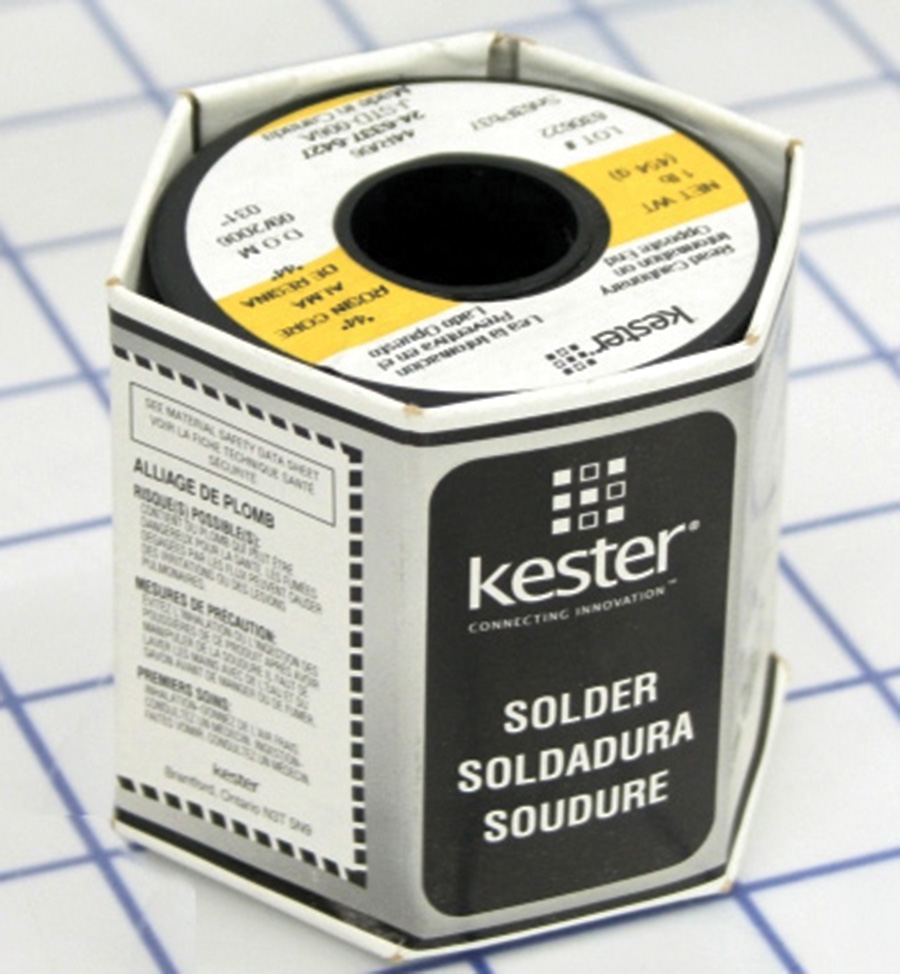 You can obtain 63/37 solder from most electronic supply houses and in quantities from one pound down to a few ounces on eBay. There are many capable suppliers of solder, but name brands like Kester, Ersin, and Alpha Metals are always a good bet. In a pinch, 60/40 alloy is close enough. For many of you, a one-pound spool of solder is a lifetime supply…and pretty expensive. Numerous vendors on eBay offer small quantities of 63/37 at attractive prices (Fig. 8). 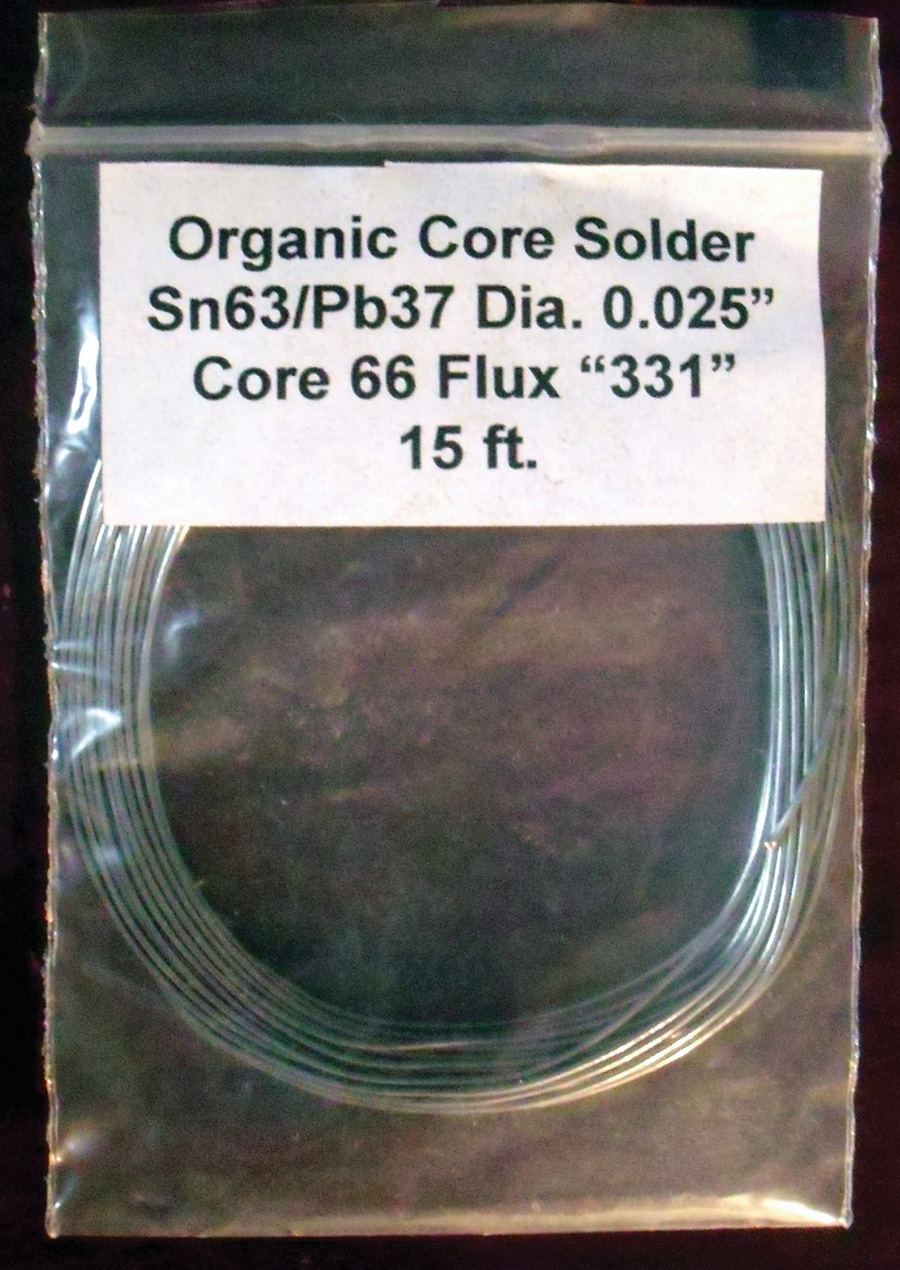 Here is a very useful product to have in your soldering toolbox. This and similar products go by the name of “solder wick” (Fig. 9). All examples are made as a flat braid of fine copper wire coated with a good flux. This is used to remove solder from a joint. It’s very useful when cleaning up the soldered terminals of a switch or cleaning out the holes in an etched circuit board to replace a part. 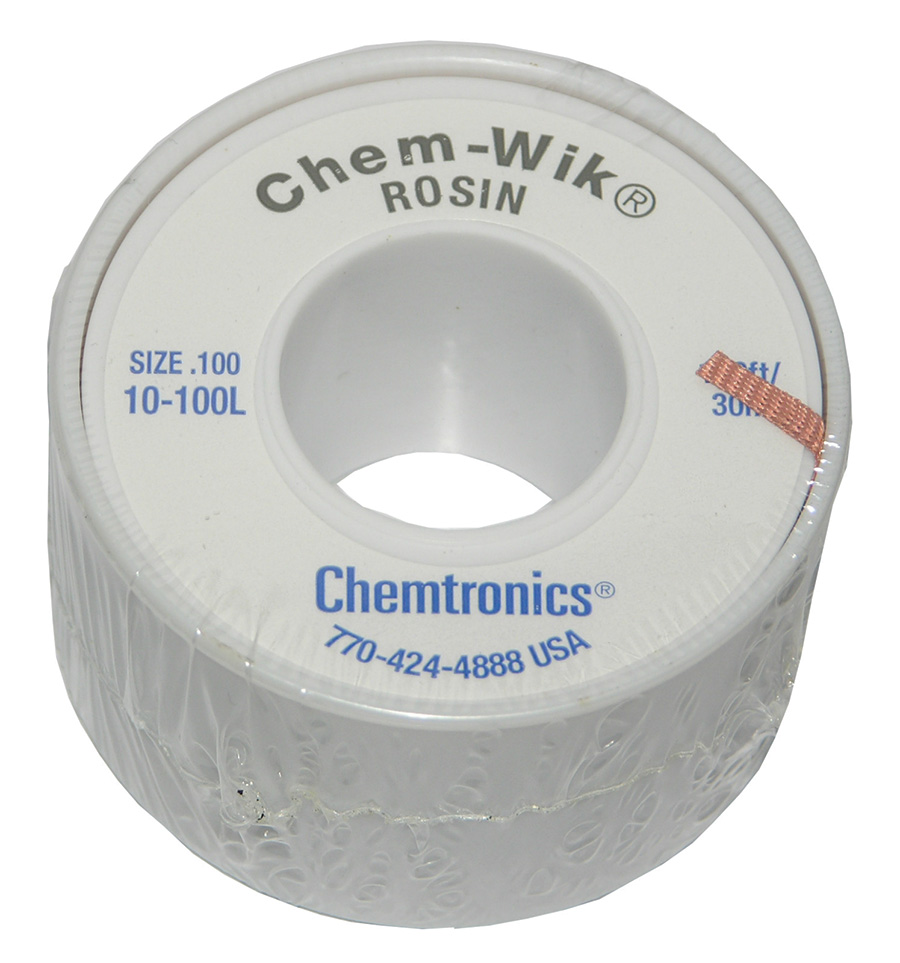 There are lots of wanna-be solder wicks. Some are quite good, others are disappointing. The disappointments are made from wire that is too large and/or coated with a poor grade of flux. Chemtronics, NTE, and Solder Removal Company are good bets. I’m not implying that there are no able competitors. If you have an opportunity to try out a “good buy” off of eBay, it’s a low-risk adventure. Pitch the stuff and try something else if your solder wick experiment doesn’t quickly and cleanly soak up molten solder like a dry sponge.

Few tools come in more styles and qualities than soldering irons. Electric irons are available in battery-powered, portable configurations, as well as plug-in-the-wall wands. The most useful irons will have some means of controlling temperature, with the best being thermostatically controlled (Fig. 10). You can spend anywhere from $4 to $500 for a soldering iron. However, with a little practice you can probably solder all the necessary joints on your project with any of the aforementioned devices. Soldering well is more about materials and skill than tools. A high-dollar soldering iron will help you do a better job, but it cannot compensate for lack of practice. 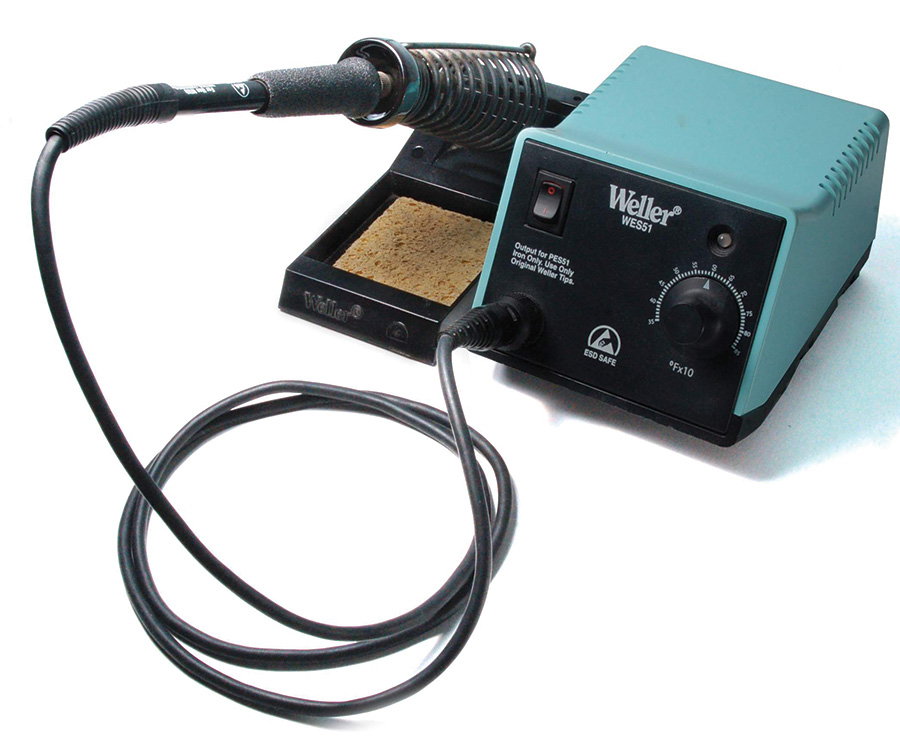 I probably own a couple dozen soldering tools, but if you’re wanting to own only one, then I’ll suggest a plug-in-the-wall wand from RadioShack or off eBay (Fig. 11). Sixty watts is plenty…25 probably adequate for the small solder jobs ahead. 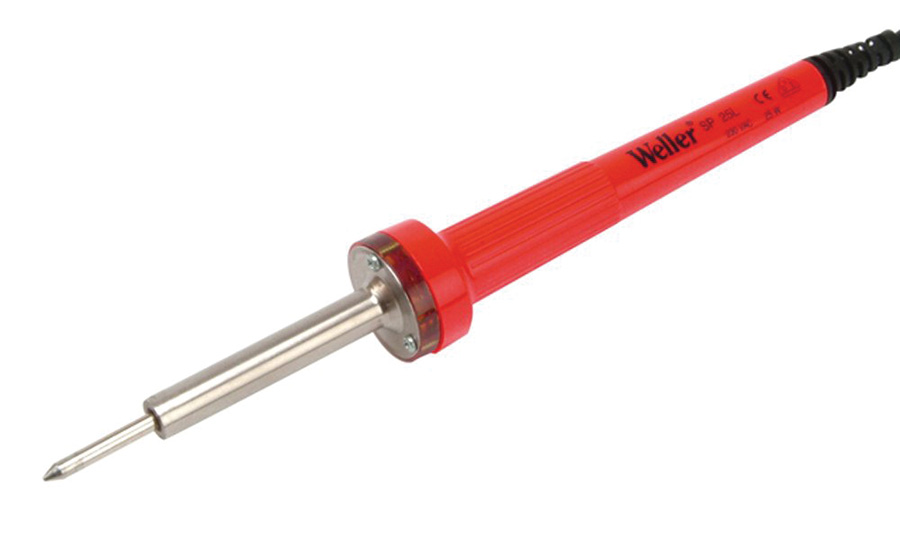 Installing the fat terminals described in Part Two calls for more heat—a miniature torch is handy (Fig. 12). There are a variety of gas-refillable irons/torches. Firing up a butane torch in a hangar with fueled airplanes about might seem a bit risky. Know that the butane-powered irons have no open flames after they warm up. Right after you light them, there will be open flame for a minute or so until it warms up. At operating temperature, the flames go out and combustion is totally constrained within a chamber at the base of the tip. 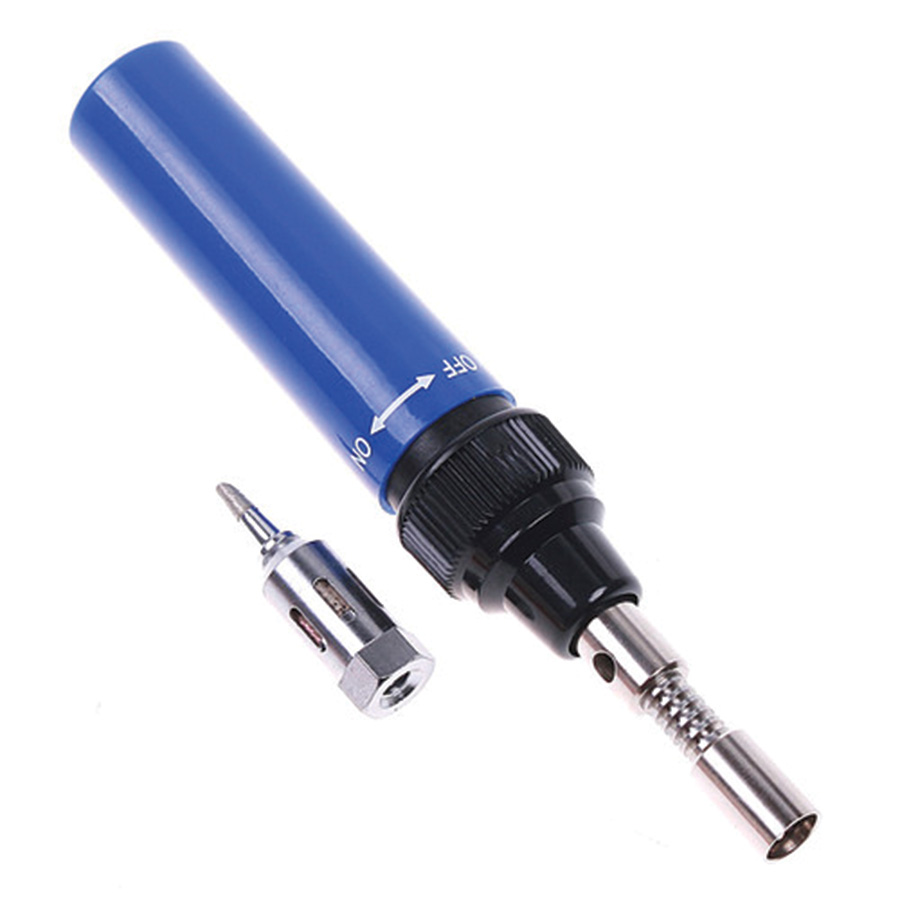 Iron plating of the tip is something to look for on all soldering irons. Unplated tips will dissolve into your finished joints and requires re-shaping with a file. You’ll also want a tip that comes down to a sufficiently small diameter to work the pins in a D-sub connector—something on the order of .050 inches.

My personal favorite soldering irons are made by Metcal (Fig. 13). These are top-of-the-line tools with very accurate temperature control. They’re only rated at 30 watts, but they deliver virtually all of that power available right at the tip. Further, there are dozens of tip styles in two temperature ranges. New Metcal solder stations are priced in the hundreds of dollars, but eBay is a great source for used solder stations and replacement parts for Metcal at reasonable prices. 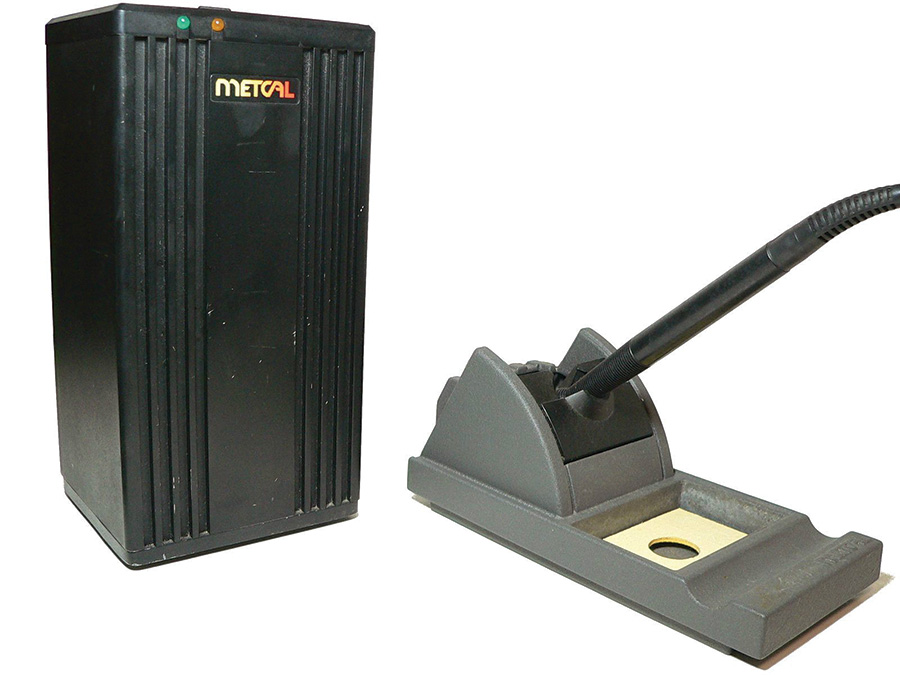 Both crimp and solder technologies are useful in the assembly and maintenance of your project. Each has unique requirements for selection of tools, materials and skill sets. It’s a good idea to become familiar with the processes before you bring them to the airplane. The learning curves are steep for both technologies, so practice on some spare wires and components.

Scott Spangler - May 13, 2010
0
Designer John Monnett has been waiting more than three decades for his SubSonex very short-winged glider to take off, and now it just might.