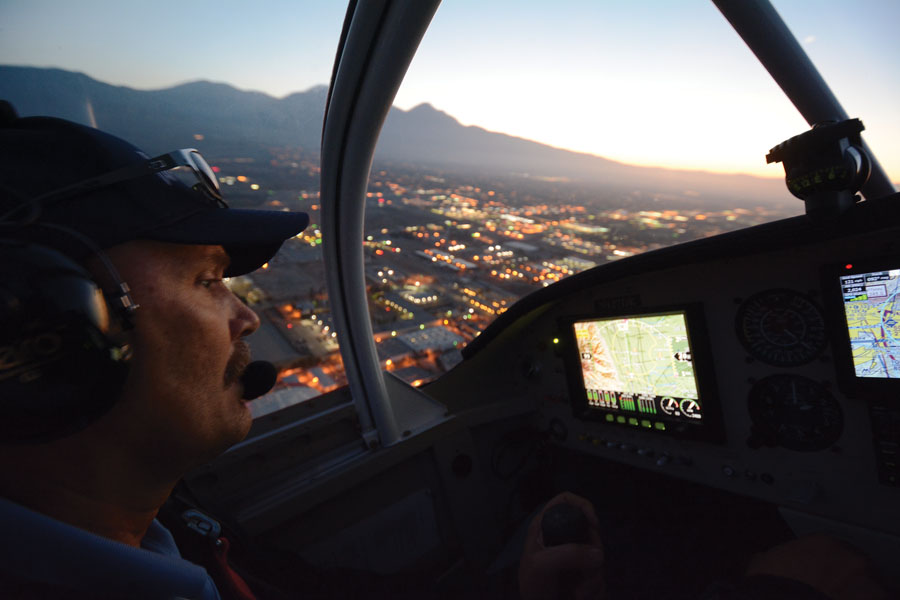 Dawn light over a sleepy Los Angeles marked Doug Kott’s pilgrimage to AirVenture. Taking two days one way in his new RV-9A, the effort to fly his plane to Wisconsin was commensurate with the dedication it took to build in the first place. It was a cool trip, too.

Thanks to the realities of ink on paper publishing (long may it live), the heat, humidity, rain, lightning, tent-flattening wind, and grit on the floor of the communal showers at AirVenture 2018 will be fading memories when you read this. But as I scribble the week prior to the EAA National Convention, the big doings are all in the near future, along with the daunting prospect of simply getting there.

Now, those of you living in the upper Midwest or the Ohio Valley or even along the Mason-Dixon line probably wouldn’t snag “daunting” out of your flight bag when describing the effort needed to reach KOSH. Any flivver with the capability of one of Clyde’s 172s will take you, a friend, and a propane stove to Wisconsin with relative ease. The distances aren’t endless, the terrain is mainly flat, and the magenta lines on the GPS pretty much straight. Heck, it even makes sense to hitch up a trailer or tank up a motor home and drive to AirVenture for those in the middle of the continent. You miss out on the flying to and from, but have an operating kitchen sink and a rainproof roof when you get there.

It’s not so much like that for those of us living farther away. And while my carping is West-Coast based, I’m sure most of my comments are applicable to anyone personally familiar with Spanish moss or lobster pots, much less those in Alaska, Hawaii, or the rest of the world for that matter.

Starting out as I do from near San Diego, the real issue is distance. According to AirNav, it’s 1477 nautical miles—that’s 1699 miles when using an odometer—to KOSH from my local fly patch. That’s a couple of full days and many dollars’ worth of avgas, even in something relatively fleet, such as your basic Van’s flying rivet collection. And should you drop down to the 120-mph range, it’s a 14 plus hour drone. Assuming you need to return home, you’ll more than double these hours thanks to the prevailing westerlies, which somehow always prevail more on the nose than on the tail. Thus, we arrive at 20 hours in the RV and 28 plus hours in more basic machinery. Sadly, that’s more than some of us fly in a year. You’d have to be unusually motivated and retired to consider any of the true low-and-slow set, and don’t even think of driving there.

Naturally, at the other end of the spectrum we have the speedsters. Those possessed of Lancairs and such make the San Diego to KOSH run in seven something hours, one fuel stop, and little fatigue, I’m reliably informed. If you have one of those, you can quit reading now, I suppose.

Getting to the big show has been such a distant issue—both literally and figuratively—that for the first 40 years of my aviation life, I never considered it. Oh, I had heard about it and was nearly barked at by some in the industry, including EAA staff who acted like I wasn’t truly participating until I had made the pilgrimage. Telling them it was a really long way to go for a guy with only so much disposable income, a family, and a deadline-driven job fell on deaf ears, like whispering to an air raid siren. I was told I “had to go,” but for me Oshkosh was a bucket list item, something for that proverbial someday.

Besides, I had Reno. That’s only a 10-hour drive or four plus hour flight in a middling airplane, and when I got there they were racing stuff. But getting even to Reno has always been an open question. I’ve driven there in a car with friends, driven a car there by myself, towed a truck/trailer, flown commercially, and flown privately. Each has its advantages, but flying in the Starduster is easily my favorite, even if you can’t land at Stead airport where the action is and obviously haven’t brought an RV to stay in right at the field. But it’s within reach.

Ultimately, like so much I’m grateful for in life, I got to AirVenture thanks to friends. They were flying their twin and asked my wife and I along as their guests; inside, as we turned final for 36, I was downright giddy that I had actually made it. Thanks Bob and Gail.

Since then I’ve been a pretty regular AirVenture attendee, if for no other reason than it helps keep me current for KITPLANES work. My wife and I drove once—it was part of a 28-day walkabout—and I’ve been there via RV-9A and some sort of “Boeing with two large turbines under the wings,” as old crop duster friend Bill Whitlatch called those things (it was the only way he’d fly cross-country). Like Reno, there is no one good way to do it, although flying commercially and camping is definitely the most cost-effective way to make the aerial hajj.

No doubt the most satisfying way of getting anywhere, but especially AirVenture, is in a plane you built. It’s doubtful I’ll ever make that trip myself, but my RV-9A trip was with longtime friend Doug Kott who had recently finished his plane and was making his first truly long cross-country, his first trip to AirVenture and, obviously, his first entrance to the Big Do in a plane he had built. I had nothing to do with building Doug’s plane—the accomplishment is entirely his—but certainly I could sense the scale of his achievement and the quiet pride he took getting his handsomely finished plane to KOSH.

To that I can only add, simply being there by any means can sometimes be the realization of a long-held ambition. It was for me, and if you haven’t been to AirVenture or Sun ‘n Fun or Arlington, the air races at Reno, or any of the other grand gatherings, then of course I’m advising you to get there when you can. But I’m also here to say that if you can’t—if work or life is getting in the way, and all you can do is read about it or go to your workshop and build another rib, then you’re participating as you can, in your own way. And no matter what those who are all-in on the you-have-to-go program yell at you, I salute you for that.