Like the now quaint discussions regarding manual versus automatic transmissions in whatever gets you to the airport, the merits of glass versus steam gauges were settled a long time ago. Glass panels are less expensive, require far less maintenance, are more durable, and offer much more information with greater intuitive ease (mainly). To consider anything but glass for a new build or heavy airframe overhaul these days is to pencil a line on a sectional chart. 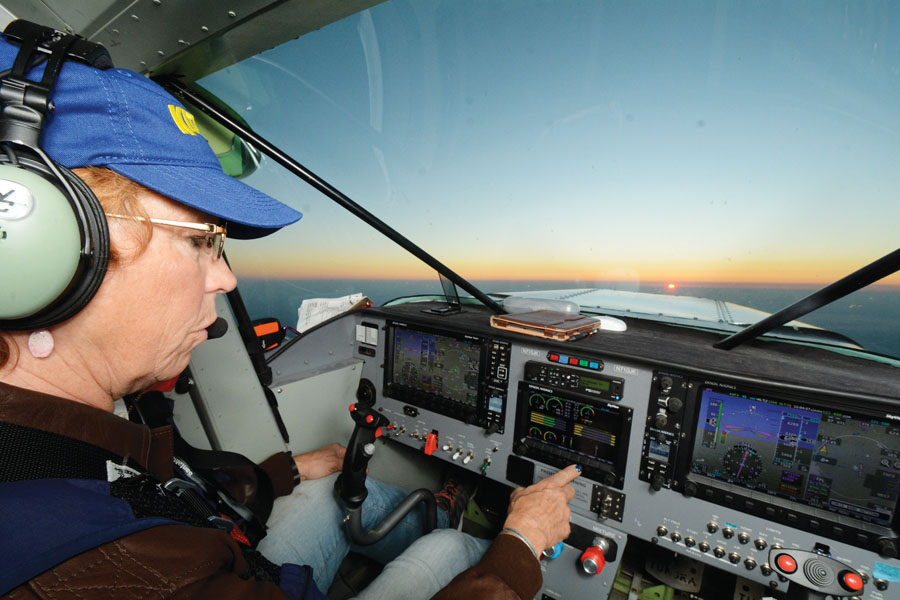 How it’s really done today: one hand in your lap, another pushing a button. Glass instrumentation simply can’t be beat in almost any metric. Thirty years on it’s just taking some of us a while longer to get used to it!

But for all that, glass screens are soulless, same-looking belly buttons with all the come hither of Darth Vader’s abdomen. Or maybe I’m just getting old.

Of course, being stuck in the thirdhand rag-and-tube era of homebuilding, I had never flown a glass panel until last summer when I spent 30 hours staring at one during the annual cheese-land hajj, courtesy of the boss and his recently built Tundra. The affects were simultaneously predictable and occasionally unexpected.

To the first order, I expected aviating via TV to be initially confusing, then easy, and it was. But what I didn’t expect was that the confusion never totally went away. Confusion is not exactly the right word, but let’s say once I was well past the handshake stage, I still had to stop and think what all those numbers meant. There are a lot of numbers on a glass panel. They roll and scroll, change colors and flash, but they are all just numbers. Or more correctly, numerals, in keeping with the precision of the glass panel.

This, um, confusion, has two components, one I’ll label absolute value and the other relative importance. Absolute value is where digital displays shine. If you want to know your exact altitude to the foot, the digital altimeter display is fabulous. See, we’re 3828 feet above the ocean blue. This is pretty handy if you’re in Phase 1 testing and doing the lab coat and clipboard thing, but I really don’t care about the last two digits the rest of the time. To me 3828 feet is “3800 feet” or “3800 feet plus a little bit.” If I’m in a cruise climb, 3828 feet is, “Good, I’m past 3800 feet, and she’s still climbing OK,” or something like that.

Curiously, in cars I differ from most folks in my preference for digital speedometers. Somehow “84” in big numerals on the instrument cluster lets me instantly know just how far over the limit I am. But tachometers should always be analog of some sort.

My other concern—relative importance—has been beat to death in digital versus analog discussions for ages, but is so core to the human factors in play I feel compelled to plow that field again. In short, if Mickey’s big hand is pointing just past the 8 and his little hand is near the 3, and from looking outside I can see dogs running across someone’s yard, then I know I’m at 3800 feet or close enough for practical concern. For sure I’m not at 380 feet or 38,000 feet, so it has to be 3800 feet. But far more importantly, I know if Mickey’s big hand is steady I’m holding altitude, and if it’s swinging up or down I instantly know I’m climbing or descending, and how fast, too. Typically that’s far more important to me than my precise altitude. It’s the ‘ol rate of change thing.

I guess things would be different if I were in the clouds and couldn’t see the dog running across the yard.

Of course, the tower over at the downtown airport always asks you to read your altitude to them about fifteen seconds after takeoff, and then I have to convert my analog situational awareness into some precise number for them. I know they’re traffic-copping me on my altimeter setting but that hasn’t eased my pain in being bothered with such an inane waste of time and brainpower when I’m busy looking out the window. Geez, I can tell I’m higher than the office buildings, climbing, and I’m watching for traffic. To have to turn Mickey’s hands into precise numerals at that point…if I had a glove I’d slap them. If I had glass maybe I wouldn’t find it such a bother.

Perhaps a better example is the fuel flow instrument. My Bendix fuel injected 540 takes a little technique to start when hot, something akin to safety wiring a turnbuckle via a mirror. Thankfully my analog fuel flow instrument decodes the fuel system’s gurglings with amazing fidelity, and mainly because it is a mechanical instrument, an eyewitness to the laws of physics and not some second-hand electronic representation thereof.

So, while going through the witch doctor dance that is starting a hot Lyc, I glue an eyeball on that analog fuel flow instrument’s needle. If, while caressing the boost pump the needle rises and falls similarly to a cold start, then I know the fuel in the lines is still liquid and I can expect a nearly flooded condition (a warm engine needs no extra fuel enrichment to start, so pretty much any priming is too much). But if the needle flutters when the mixture knob goes in or when I hit the boost pump, I know heat has boiled fuel in the lines and urged a bit of gas down to a cylinder. Just how much the fuel flow needle wiggles and wags clues me in on if there was just a little vaporized fuel in the lines or if we have a full-blown case of the vapors, in which case you might as well flood it and renew your membership in the chug-a-lug black smoke club.

Given a glass display, the fuel pressure is mainly given in numerals, sometimes augmented by an electronic rendition of an analog display. The trouble is the numerals might fluctuate a bit during the hot start prime, but you can’t tell by how much. A cascade of numbers is a mess and gives no clue as to how big a mess. And the ersatz electronic analog dial with its cheery yellow, green, and red arcs is too small for hot start priming accuracy and electronically dampened anyway. Heck, it might be a bar graph, in which case you might as well show a goat a watch in my case.

The real answer is electronic fuel injection, where the all-knowing, ever vigilant computer does all thinking and doing, leaving us to what? Enter waypoints in a GPS, I suppose.

Of course, you can’t beat glass for navigation, where stalwartly lashing yourself to the rudder post, E6B in one hand, stick in the other, ear to the AN range and an eye glued to the CDI is replaced by keeping the little airplane icon on the magenta line, and watch out for the red terrain or green blob weather. It’s just like guiding the little metal bee along with a magnet in one of those plastic maze kid’s toys. Well, OK, a kid’s toy from six decades ago…

And I wasn’t expecting the slight nausea engendered from looking at all those surveyor’s guide lines and such as they rolled and pitched on the screen. Guess I was looking too much at the screen and not enough out the windshield. Nor did I predict how having to-the-foot or single-degree accuracy would goad me into chasing my altitude and heading like a primary student in a windstorm.

In the end I’ll eventually come to glass, of course. The cost and benefit arguments are just too compelling, and with a white beard I already look old enough without a constellation of mechanical gyros whining nearby. Doesn’t mean I won’t miss the romance of the flickering needle under the red dome light, though.

Transitioning into the Backcountry