Last Wednesday I stopped by an old friend’s house to take him and I to dinner. This is a regular event, monthly, actually. We were headed to an informal gathering of an auto racing club we belonged to decades ago. Some of us were drivers or crew, others corner workers, communicators, tech inspectors, ersatz firemen, stewards, or any of several specialties it takes to run events where participants wear fire-resistant underwear and spectators hide behind steel railings. 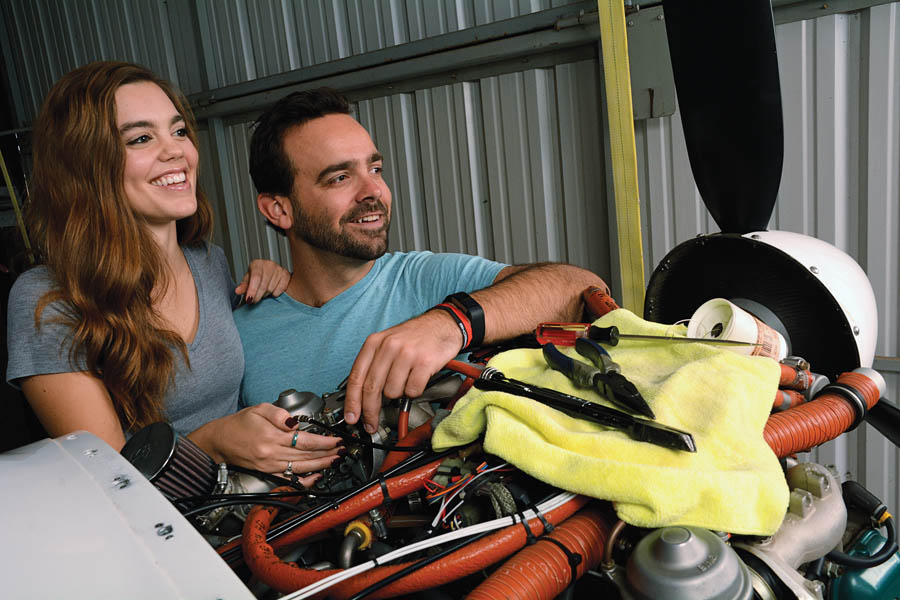 None of us race anymore, but we still get together to sing the old songs, complain about, and ultimately take care of each other.

Other than buying a ticket on a Boeing, few of our group has an aviation background. Several served in or around airplanes in the military, but my friend Jim has us all beat. Never a pilot, Jim was an engineer, and in a real stretch of the imagination to we moderns, he apprenticed to De Havilland in 1938!

Quickly specializing in engines, by the Battle of Britain Jim was running-in rebuilt Merlins on the De Havilland engine stands. One day he heard an unusual noise from an adjacent test shed, and going to investigate, he unknowingly walked into a lifetime of developing, testing, and producing turbines. He was involved in all of De Havilland’s early jets, from the primeval fighters up to flight test engineering the Comet airliner with Geoffrey de Havilland himself at the controls. He’s walking aviation history I have the privilege of sharing dinner with once a month.

Curiously, it is not Jim’s aviation background that I want to highlight, but rather something I learned from him well over 40 years ago. Using every last dime I could lay my hands on, I had recently purchased a scruffy Austin-Healy Sprite race car and was racing it as I could. More than a full generation older than I, Jim was naturally one of the well-established racers and officials in our club, and he was also running a Sprite. The difference was the paint on his car was the same color on every body panel.

Jim kept his spiffy racer in a modest, rented, two-stall plus side-space garage a few miles from his house. As an engineer, it’s no surprise he did all his own work—everybody did in those days—and consequently, like any good racer (or plane builder), he spent many solitary hours in the shop. His early postwar house was in town with no room to keep a shop on site, hence why he rented a garage four miles up the road.

There was nothing extraordinary about the shop as a shop, except to one side, but not hard in the corner, he had a small carpet, love seat, chair, lamp, and television. This was the first time I had seen a “living room” in a shop (I’ve seen many since, all of them in hangars and none in race car shops). I distinctly recall being quite taken by this as it seemed so improper or odd or somehow not fitting with my then limited vision of what a shop was and how men and women coexisted.

So I asked why the domestic oasis, and Jim replied it was for his wife Barbara when she came with him to the shop. Because the garage was a few miles up the road, there was a bit of a commitment when going there, and they being past child rearing and thus with some discretionary time, she would go to the shop with him, knowing it was going to be half a day or so, and she had her comfy place and things to do while there.

They could simply be in each other’s quiet company or help each other as the situation demanded.

I was taken by how they had integrated their lives together and thought it charmingly intelligent. My parents—a passionate if imperfectly matched pair—had divorced three years previously, and even to a neophyte such as myself, it was clear a little more accommodation of one’s partner might have paid handsome dividends in our household.

Having my sensibilities jogged by encountering a living room in a race shop, I resolved to work at involving my girlfriend into my racing rather then expecting her to sit on some tires in a white dress while I wrenched the engine in or out of the chassis for the umpteenth time.

This is also a good litmus test for a young man. If she’ll hang around the shop, she’s interested and a keeper. If not, well, I wasn’t going to stop racing.

Luckily for me, that girlfriend is now my wife. She had no sisters but three brothers and a dad all making their livings in cars, so she didn’t stand a chance. But I think getting her involved didn’t hurt, either.

Since seeing that “living room,” I’ve always made sure there was something for her to do directly involved on the car that was of true help to the effort. Race cars demand endless routine maintenance. It’s not glamorous but it’s important, vital, even. I gave my wife-to-be the job of setting tire pressures and torquing the wheels as they loosen with the heavy heat cycling and loads they’re subjected to. This is done two times a day, minimum, while at the track, and having someone relieve the driver of this is a big help. And as anyone who’s been to a racetrack over 5 minutes learns, getting the tire pressures exactly right is one of the highest rituals in the financial death by internal combustion that is racing, so this wasn’t “make work” either. Other helper duties including hand-choking the engine to life (I didn’t bother worrying her about the part where the twin carbs would sometimes fireball back at you…), signal from pit lane, time laps on our car and the competition, and most importantly of all, keep the fragile driver’s ego in one piece. And she made lunch like a duck slipping into a pond, so there’s no wonder I married her.

What I learned was she was happy to play cars with me while many of the other gals at the track were bored and unappreciated because they were essentially told to go sit in the corner and look pretty until dinner time.

We had a great time in those days.

To be overtly obvious, my message is simply to be inclusive with your spouse or whatever such relationships are called these days. Sometimes it takes patience, sometimes it’s not even time efficient, but I’ve always found it maritally cohesive.

Turns out, it’s also transferable. When the race car went away and the airplane showed up, it was but a lateral move to include my wife in what I hoped would become our aviating.

A big difference is no one expects a spouse to crawl through a roll cage and strap into race car with you, but two-up breakfast flying is not only socially acceptable but fun, too. Well, of course it’s fun for you, but the joy in it might not be immediately apparent to your better half. It took only minimal coaxing in our case to transition from shop helper to copilot, and I’ve always thought those years of exposure to hot, noisy machinery helped. Good luck is where preparation meets opportunity and all that.

Let me also acknowledge many a personal airplane factory is just that: personal. It could be a solo show, the place where everything is exactly where you left it, and no help is needed or desired. Or it could be a communal man cave where you and fellow Neanderthals make fire and beat rivets with the jawbone of an ass between beers. That’s healthy, too.

Perhaps Jim and Barbara were just the first exceptional husband and wife team I was aware of. Certainly theirs was an above average union, and it stayed so until Barbara simply timed out a couple of years ago. Now Jim does it all admirably by himself; luckily that includes our dinners and many a great story. I make sure to listen carefully.