No matter the flavor—land, sea or air—gearheads like to talk about oil. That’s probably because few of us know much about the stuff save what can be learned via those highly visual tutorials petroleum companies screen on television during NASCAR caution periods.

Still, we all know the essential truth that oil is vital to a piston engine doing its thing, and in the aviation context that’s a rather motivating concept.

We can also note aircraft engines are priced to retire the national debt, and just overhauling one is a stint in debtor’s prison, so keeping the oily bits suitably lubed seems fiscally responsible as well.

Beyond those two givens lies a devil’s playground regarding aircraft engine oiling if the chat on forums and the letters we receive here at KITPLANES are any indication. And oiling topic number one is, “My oil is too hot; what can I do?”

It’s a fair question, and to answer let’s begin this month by noting how hot is too hot, and what heats oil in the first place? As for too hot, Lycoming sets oil’s normal working temperature at a minimum of 180F as controlled by the Vernatherm (the thermostat in the oiling system) and 245F as too hot. Maximum oil temperature is engineered in by the efficiency of an oil-to-air cooler on most engines, but is ultimately controlled by the pilot and how he operates the engine.

Let’s also take a moment to recognize oil temperature is measured as it reenters the engine, downstream of the oil cooler. Obviously the oil inside the engine is notably hotter, but the industry standard is oil temperature entering the engine. We’ll further bird walk this discussion by saying aircraft, especially Experimentals, often use direct-reading mechanical or electrical oil temperature instruments that faithfully report every last movement in oil temperature. Thus, they are responsive to changes in ambient temperature and other factors. The electrical “instruments” in most modern cars are often dampened to slow response and thus miss many temperature transients (to not worry an unsophisticated public over momentary temperature rises in traffic or climbing hills). Some of these so-called “instruments” are so constrained they are really idiot lights with needles, but we digress, other than to say oil temperature, like CHTs and EGTs, moves around with different operating conditions. It’s perfectly normal. Finally, oil gains and sheds heat more slowly than water, so oil temperature is considerably slower to change than coolant temperature in water-cooled engines, as in our cars. 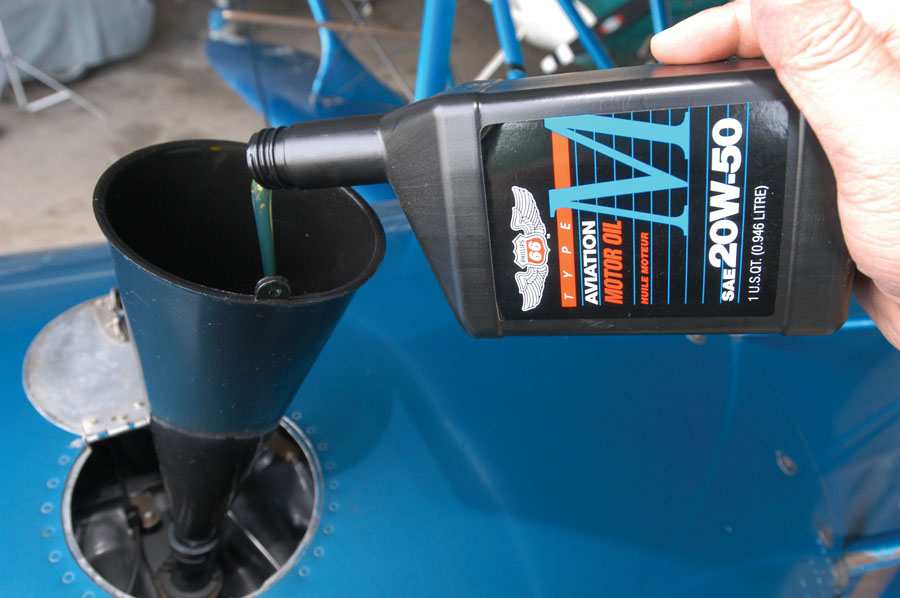 Okay, we want the oil between 185 and 245F, but where is optimal? If you’re looking for maximum power and fuel economy, hot oil is your friend because it is thinner and has less drag. Race-car people, even those with legacy engines, often run 225 to 240F oil for those reasons, and air racers do the same. They also run much less temperature sensitive synthetic oils. But running oil that hot leaves no margin if things stray from optimum. In a race car that might mean running in tight traffic on a speedway, or an engine part slowly failing, so 220F is a more realistic target for them. Aircraft are different, mainly because airplane engines are tasked with making substantial power for hours on end (race motors get a breather now and then), and reliability is more valued than fuel economy. Therefore a larger safety margin is desirable, and depending on your philosophy and environment, anything from 180 to 215F could be normal. Lycoming says 180F is desirable but 190 to 200F helps to more rapidly burn off the water constantly forming in the oil via the combustion process.

All this is nice on paper, but in the real world of winter nights, desert days, long climbs, and chilling lean-of-peak cruises at higher altitudes, oil temperatures can be all over the map. Maintaining 180F in cold environments is usually not a challenge thanks to the Vernatherm, but burying the needle during hot weather climbs is. If you fly in New England, 220F oil while climbing on a hot summer day just might be something to accept occasionally because the rest of the time there’s definitely no need for an oil cooler big enough to keep the worst summer temps at 190F. It’s easier and cheaper to step climb a couple of times a year rather than pay for and then lug around an overkill cooler in winter.

On the other hand, desert rats must have oversized coolers for summer just to hang on to 215F oil and may need a cowl flap or tape over part of the cooler in winter.

So, what actually puts heat in engine oil? Several things, the first being the oil pump. By squeezing the oil through a set of gears, the oil is pressurized (heat) and sheared a little (more heat). If there’s a prop governor onboard, then there’s a second, higher-pressure pump and more heat. Then there is friction as the oil courses through the engine’s internal passages and lines, plus around oil seals and the bearings.

Often overlooked are the valve springs. Their constant compress/expand, wind/un-wind motion produces surprising heat and must be cooled by a plentiful volume of oil, so there’re more BTUs in the lube.

Note that none of these sources require the engine actually be running; if you drive an engine with a large electric motor, the oil gets hot from these pressure and friction sources. The same is true if the propeller drives the engine during descents, and it’s also obvious the higher the engine rpm the more heat ends up in the oil from friction.

Then there’s combustion heat. If you’ve ever noted the extreme spread in EGTs from idle to takeoff power, you have a good clue on how important combustion heat is in warming oil. Roughly speaking, the more fuel going through the engine, the more heat is generated and the hotter the oil.

It’s also why Lycoming puts piston squirters on their higher-output engines. Piston squirters are a hallmark of heavy-duty engines (18-wheeler diesels all have them, for example), and they definitely work as advertised. Be advised that means oil temps rise about 10F with squirters and CHTs can be a hair cooler. In effect, squirters take some heat otherwise eventually shed by the cylinder and cylinder head and transfers it to the oil. You’ll likely need a larger oil cooler.

If cooling the piston is in oil’s job description, withstanding heat from excessive blow-by (combustion gas forcing itself past leaky piston rings) is not. Blow-by is a massive oil heater, and no number of enlarged air ducts or extra oil coolers can shed the heat a tired engine puts into the oil. Blow-by also blackens oil in a hurry, so if you have 230F oil that goes black three hours after you change it, blow-by is almost guaranteed the culprit. Forget tweaking the oiling system and rebuild the engine.

Finally, combustion heat also meets the oil atop the cylinder head inside the valve cover. That’s another reason why CHTs and oil temperature are inter-related.

Next month we’ll take a poke at oil cooling.