I remember vividly my introduction to quarter-wave sections. I was barely 15 when I went to work in a TV shop just down the street from my high school. The old geezer who hired me put a chunk of coaxial cable across the antenna terminals of a TV set and asked me to tune it to channel 8. He then proceeded to snip off small pieces of cable until a short across the cable didn’t make the picture go away. That blew my teenage mind-that shorting a wire across an antenna port didn’t short out the entire signal. 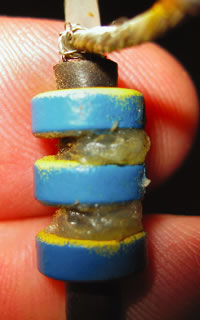 Lesson learned. I may have been working for 35 cents an hour, but I was getting a thousand-dollar education from that old man. There is much magic, he said, in a coax cable that is a quarter wave long. A vivid mental image was filed away 50 years ago.

Lets put that quarter-wave section to work. Were going to use it in two places: making a coaxial balun and making a VOR/LOC antenna splitter.

First the balun (pronounced bal-uhn). What use do we have for it? Well, in the first place, a balun is a made-up word composed of BALanced load to UNbalaced line. Say what? A dipole antenna (two ears, like a TV rabbit ears) is a balanced antenna: two equal length ears or elements (surprisingly, a quarter wave long) fed in the middle with radio frequency (RF) energy. But that RF energy comes down an UNbalanced coaxial cable made up of a center conductor and an outer metal braid shield. Somehow we have to go from UNbalanced line to BALanced antenna.

Why? Well, at the exact frequency where the dipole ears are exactly a quarter-wave, we really don’t need the balun. All of the energy fed to or received from the antenna will be radiated or conducted. However, with the slightest frequency change up or down, some of that energy will be reflected (bounced off) the dipole ears and back down the coax cable. Some of it will travel down the center conductor (OK), but some of it will come back down the outer shield (not OK). That energy coming back down the shield is more than happy to radiate out into the airplane and mess up anything that is susceptible to radio frequency interference (RFI) such as headsets, intercoms, digital engine gauges and practically anything at all electronic.

So, sez you, why not just operate at that one good frequency where the elements are quarter wave? Because, sez I, the aircraft com band goes from 118 to 137 MHz, and the nav band goes from 108 to 118 MHz, and it is only one exact spot frequency in those bands where the antennas are precisely resonant. I am not going to crawl out onto the wing to adjust the antenna element length in flight. (Please note that whip style ground plane antennas are unbalanced to start with, and you can feed them directly with unbalanced coax without a balun.)

With that nice dipole antenna, we need a balun of some sort. Two ways: little ferrite toroids (or doughnuts) slipped over the coax to absorb the power or a tricky little quarter-wave coaxial cable design.

But wait. In the air is not where the RF energy is going to be. It is going to be inside of a piece of coaxial cable that is not made of air, but of copper conductors (center conductor and shield) separated by a polyethylene dielectric. RF energy doesn’t travel as fast in polyethylene as it does in air, so we have a velocity factor of 0.66 (plus a 5% foreshortening factor for end effect) for polyethylene that shortens the quarter wave to 26.1×0.66×0.95, or 16 inches. Now we can get to work.

Now comes the quarter-wave magic. You have a length of coax cable running from your radio to the dipole antenna. Fold the antenna end of that cable back 16 inches, and strip both the black outer plastic sheath and the braid from the center of the fold at the top of the cable bend. Twist the braid coming from one side of the stripped cable and twist the braid coming from the other side of the stripped cable. One of these braids goes to one of the antenna elements, and the other braid goes to the other element. Sounds goosey, doesn’t it? The braid is ground for heavens sake. Remember the 15-year-old kid and the old geezer with the quarter-wave section? That braid is no longer ground, but part of a quarter-wave transformer. Now, heres an even stranger thing. At the end of the quarter-wave section, the two braids are soldered together, but the center conductor is not connected at all. Magic squared.

What is the benefit of doing a balun this way? Well, for lightning and corona, both elements of the antenna are grounded. For RF at or near the quarter-wave length, the antenna ears are connected directly to the radio.

How about the splitter? A fellow by the name of Wilkinson showed us this little trick back in 1960 (IRE-MTT, January 1960) where two quarter-wave sections of coaxial cable can be used to exactly split one antenna into two halves such that any load or combination of loads on one output port has absolutely no effect on the other output port. And, with a neat little gimmick that I added 30 years ago, we can have a glideslope signal from the nav antenna with no loss to the VOR or LOC signal being split.

The problem is that the coax cable you have to use is 72-ohm cable if you are splitting a 50-ohm signal; 72-ohm cable is easy to find if you don’t mind size, but the tiny stuff that you can curl up into a small box is somewhat difficult. You can Google RG-179 or Belden 9221 (same stuff) and find folks who will sell it to you for about a buck a foot. You need 3 feet to make a single splitter (two 16-inch lengths), and with a small metal box and a few RF connectors you will have 10 bucks or so in the splitter. The cheapest I could find was $100 for the two-VOR model and $140 for the two-VOR-plus-glideslope model. The glideslope adder is about $2, so you will save enough with this one project to extend your KITPLANES subscription for a while.

The electrical design is easy: one antenna input, two quarter-wave sections of coax cable, each feeding one output and a small 100-ohm balancing resistor between the two outputs. The mechanical part is the difficult end of things. Squeezing all that coax (which can be coiled up if you like) into a tiny box is what we in the industry call a blivit…thats 6 pounds in a 5-pound sack.

Oh, and the glideslope modification? One 10-picofarad capacitor with exactly 1 inch total lead length from antenna input to glideslope connector makes a series-resonant circuit splat in the middle of the glideslope frequency band, and yet causes nearly no perturbations to the VOR-LOC coupled outputs. A real Weir two-fer. Thats about it for this month. Stay tuned for some more economy-minded projects.

Jim Weir began acquiring AeroLectrics expertise in 1959, fixing Narco Superhomers in exchange for flight hours. A commercial pilot, CFI and A&P/IA, Jim has owned and restored four single-engine Cessnas. These days, he runs RST Engineering and teaches electronics at Sierra College. Ask him questions at rec.aviation.homebuilt or visit his site at www.rst-engr.com/kitplanes. 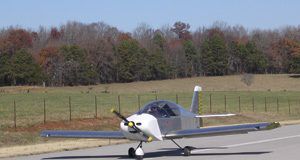