By 1916 the horror of trench warfare was firmly established. An intricate series of trenches wove a zigzag labyrinth hundreds of miles long across Western Europe. The first of these appeared in 1915, but eventually they stretched from the North Sea to the Swiss Frontier with France. 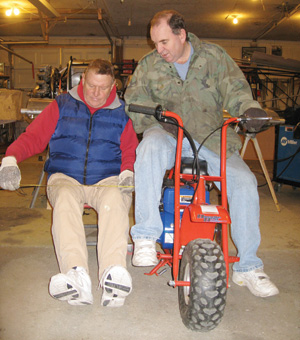 Bullwhip Baslee and Dick Starks plan the dimensions of the sidecar.

Some disasters early in the war showed that traditional cavalry charges of men on horseback against machine guns presented a recipe for disaster. The war quickly settled into a stalemate consisting of a trench, no-mans land and trench configuration.

The British high command realized that there was a need for some mode of transportation to liaise between the trenches to carry mail, dispatches, personnel and spoken messages. This vehicle had to have a low profile, and be small and able to handle extremely rough terrain. A removable sidecar would have to be incorporated into the design to carry extra personnel.

After a series of trials to test different proposed designs, they finally decided on a small, compact motorcycle that was given the name, the Trench Cat. 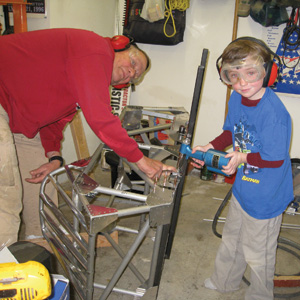 You have to start them young. Grandson Ben Pierce learns the skills necessary to work a pneumatic riveter.

It was a compact low-profile little motorbike that could navigate the ground behind the trench and keep the rider and passenger out of sight behind the earthen berm thrown up in front of the trench. The Trench Cat was geared low to enable it to navigate the different types of terrain it would encounter.

The first Trench Cats were an instant hit with the Tommys in the trenches. The little one-lung, four-stroke engine was geared so low the bike could almost climb a tree. The low profile kept the rider and sidecar passenger below the line-of-sight of the German snipers who were on the lookout for targets. It was faster over the ground than walking, and the sidecar made it easier to move personnel.

Not a word of this is true. There was no Trench Cat, but it could have happened that way. As my wife, Sharon, and I approach the threshold of advanced age, we find our ability to walk long distances over hard surfaces degraded. It shows itself the most at Oshkosh. After just one day there, the dreaded Oshkosh knee flares up. Even with the numerous shuttles that run back and forth all day long, there is still a lot of walking. 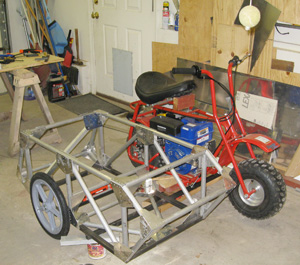 The sidecar frame is ready to be fitted to the Doodlebug.

For Oshkosh 2008, we trailered Sharon’s Morane and DH-2 to display in the Replica Fighters Association area waaaay up at the north end of the field. We camped waaaay down at south end of the field in the ultralight camping area. Just walking from the campground to the closest shuttle stop was a good stretch of the legs. By the time we got to the RFA area, we were pooped and Oshkosh knee had set up shop.

For Oshkosh 2009, we brought up a nice little two-seat scooter that allowed us to ride around the perimeter of the field and end up in a motorcycle/bike parking area pretty dang close to the RFA building.

The only fly in the ointment was that the scooter, which we called the Wild Snorting Piglet, weighed more than 200 pounds, and it was big! We carried it on the front of the DH-2 trailer. But there was no way Sweetie and I could hoist it up to and down from the trailer. We always needed help, and sometimes there was none to be had. The resulting grunting, swearing, sweating event was a surefire marriage killer. (Like I said, were approaching that age at a furious rate of speed.) There had to be a better way. After the show, I began to look at other options. 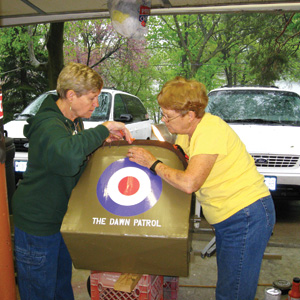 Cathy Seybert, Sharon’s sister, helps Sharon with the final finishing of the sidecar.

It Takes a Dreamer

Back when I was a lad, there was a compact little minibike called the Doodlebug. I wanted one bad, but that wish was never realized…till now. I didn’t know they were still in production until I was surfing the web one night and Googled it. Lo and behold, they’re still out there and at a nice price, too. So I ordered one, and after it arrived it took only an hour to assemble. The little 1.6 horsepower engine started on the first pull. I was so excited. Then I mounted my new steed and twisted the throttle. Nothing happened. Even on level ground the bug would not go.

Back to the web, and there I found the web site www.oldminibikes.com. There is a surprisingly large group of minibike owners out there. Even better, one of them offered a bolt-on engine upgrade kit to take the bike from 1.6 hp to 6.5 hp at a great price. So I ordered one.

The upgrade was just great. I had it done in about 2 hours. It turned a rheumatic snail into a fire-snorting beast. When I twisted the throttle on my first ride, it reared up on the back wheel (scaring the heck outta me) and took off! Im glad the engine is governed to go only 25 mph, which is as fast as you really want to go on those small wheels. 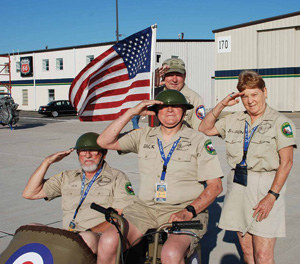 With the engine issue resolved, it was time to design the sidecar. With the vast number of ideas potentially available through the members of The Dawn Patrol, I started the quest for a design. I first went to Airdrome Airplanes, Robert Baslees kingdom, where he runs Bullwhip Baslees House of Pain with an iron fist. We easily loaded up the Doodlebug (only 78 pounds) in our Stealth Van for the trip. I told Baslee what I wanted to make. I was so enthused telling him and Sharon how neat it was going to be. While I was blabbering away, I just happened to look up quickly enough to see Baslee and Sharon doing a formation eye roll. I didn’t care. This was going to be great! Baslee caged his eyes and settled down to thinking design. In about 30 minutes he mentally designed and described to me what I would have to do. We had a start.

Then we loaded up the bug in the van and paid a visit to each of the other Dawn Patrol gurus: Mark Pierce, Dick Lemons and Tom Glaeser (lots of eye rolls there, too). But, by golly, we ended up with a plan, and the plan worked. The final result was a thing of beauty and functionality. It was light, easy to load onto the trailer, and it could be carried in the Stealth Van as well.

The Trench Cat looks just right parked in the grass by the runway at beautiful Liberty Landing International Airport.

The first test of the Trench Cat was the Memorial Day weekend Salute to Veterans Air Show held at Columbia Missouri Regional Airport, where it proved its worth in the first 30 minutes we were there. I was shuttling people all over the field, and the eye rolls had vanished in favor of requests to be taken somewhere to avoid a long walk on hot cement. My dream was vindicated.