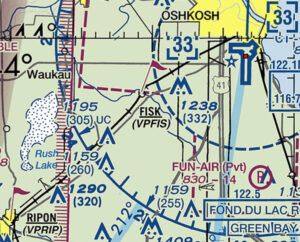 People make a big deal out of the VFR arrival to Oshkosh during AirVenture, and of course, I understand why. The “Notice” is 32 pages long, and there are 10,000 other airplanes all trying to get into the busiest airport in the world at the same time. It’s intimidating—I get it. But take a deep breath and realize a couple of things.

First, almost everyone that tries to get into Wittman Field during the show makes it in. Very few fly all the way to Wisconsin, try to get in, get turned away by traffic, weather, procedural complications—whatever—and go home. Sure, there are folks from the local area, say 150 miles away that might just throw up their hands when they see the line of ADS-B targets inbound from the southwest—but heck, if they really want to get to the show, they can go home and drive! But even they make it in—sometimes on a daily basis, commuting each day and “braving” the approach every time. So, no matter how intimidating it might be, if you follow the rules, you’ll get in.

Second, I’d like to propose that despite the 32 page Notice, the arrival is not all that terribly different than what every private pilot has done before. Think about it—you fly up to the edge of Class D airspace at 1,000’ AGL (pattern altitude), communicate with the Tower, they assign you a runway, and they even tell you where it would be best to touchdown to expedite where you want to go on the airport! Aside form the extra help they give you, how is that any different from flying in to your local mid-sized towered airport?

Don’t overthink the approach—yes, there are railroad track, and wing wags, and speeds to fly—but that is all to be expected any time that you fly into a controlled environment. Well maybe not the railroad track—but I have often been told to  “fly to the truck scales on the freeway, then direct to the golf course, then enter a left base for Runway 29”. They’re just instructions. And you don’t even have to talk on the radio—something that frequently keeps pilots from wanting to fly into a towered field—that fear of not knowing what to say, of screwing up in public. Don’t sweat it—at Oshkosh, you don’t talk—you just listen!

Now I’ll admit—I have heard controllers get a little snippy the fourth time that a Bonanza calls in thinking that he can use normal procedures, and no, he doesn’t have the Notice onboard. But I don’t think that I have EVER heard of ANYONE having enforcement action taken against them due to an AirVenture screw-up. Remember—air traffic controllers are not cops—they are there to move traffic, keep airplanes apart, and make sure no one bends metal. No one at the show has time to enforce anything—so they might get annoyed, but you are not going to lose your license if you screw up by accident.

Sure—the traffic can be intimidating, and don’t be surprised if you have to break out because you’re stuck behind slow traffic ahead. That’s in the procedure—just go find another slot. No one has a God-given right to land at the show at a specific time, and that Ercoupe pilot is pedaling as fast as they possibly can—really! Go with the flow, have plenty of gas, go take a break at a local airport if it’s a zoo—and remember that the procedure just isn’t that hard—just remember to breath.

Kitplanes - January 28, 2022
4
Paul Dye wraps up the KITPLANES Metal Magic series with a discussion of whether...

The Independence Project: We Start the Finish Kit

Dave Martin - October 7, 2009
0
The Independence Project presses on, this time tackling the multiple tasks that make up the finish kit on the RV-12. By Dave Martin.